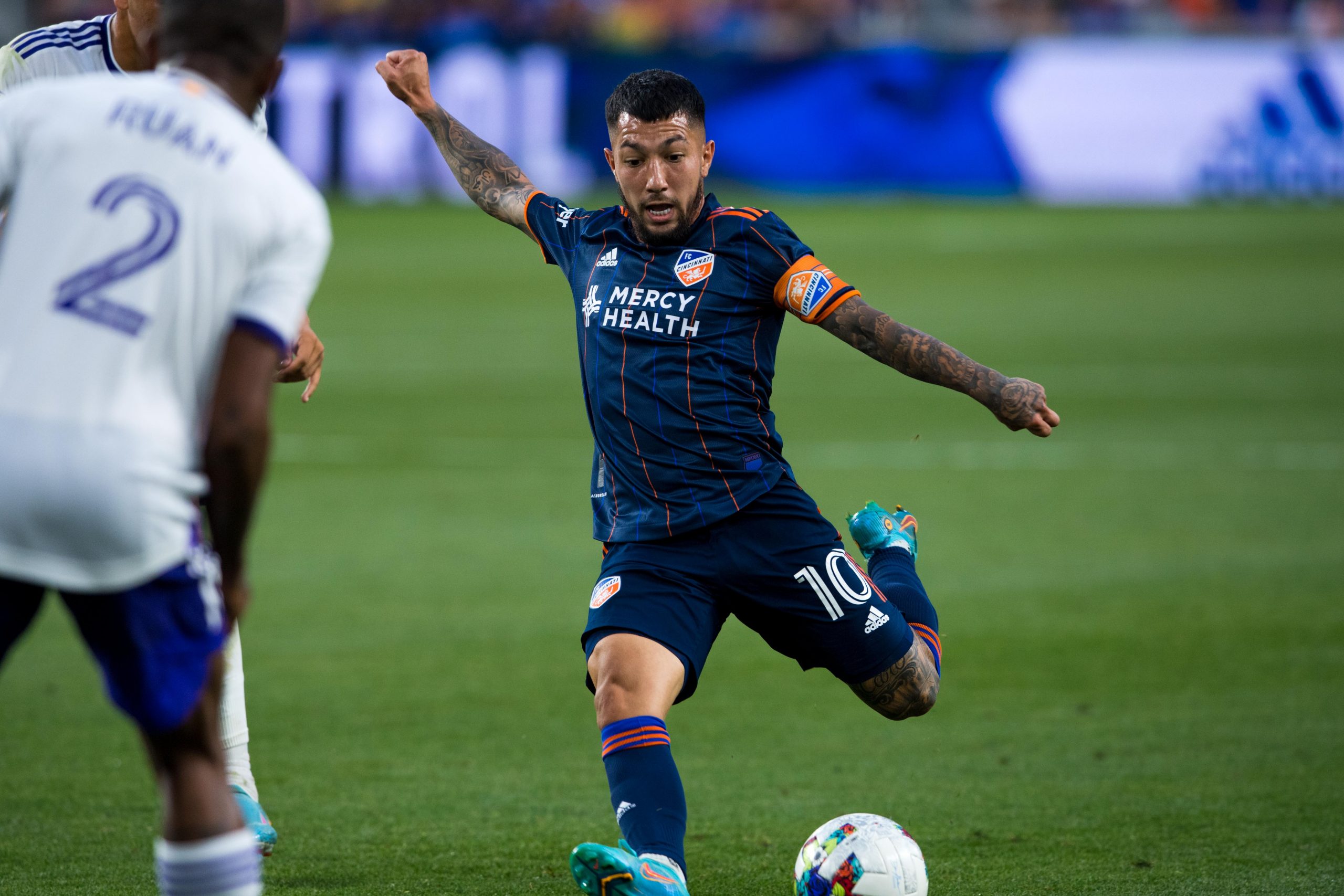 FC Cincinnati completed the double over Orlando City SC on Friday night in a comprehensive fashion, though the scoreline didn’t fully reflect the Orange and Blue’s quality. If not for Pedro Gallese, Orlando’s goalkeeper, Cincinnati likely would’ve coasted to an easy three points. However, some spectacular stops by the Lions’ shot-stopper kept Orlando in the game until the final whistle.

FCC’s defense limited Orlando to just a few chances (0.2 xG on seven shots, per Football Reference data). Roman Celentano made just two saves and neither represented much of a threat.

On the other side of the ball, the Orange and Blue were dangerous at times, even though its talisman Lucho Acosta, still recovering from time in health and safety protocols, didn’t start. FCC finished the night with 1.2 xG on 14 shots, nine of which were on target. There’s certainly room for improvement in the attacking phase of play but, without its most dynamic offensive threat and maybe an MLS MVP candidate, FCC controlled much of the game and generated the best chances.

Though FCC created danger going forward in the first half, the addition of Lucho Acosta in the 55th minute pushed the Orange and Blue to find the eventual winning goal. In his 36 minutes, Acosta took five shots (a team-high) and had 18 touches in the final third and six in Orlando’s penalty area.

The sequence leading up to and including FCC’s opening goal in the 65th minute demonstrates exactly how vital Acosta is for the team.

Right place, right time. @09brenner gets one past the goalie! 💪 pic.twitter.com/5X1raCaKSo

His shot from distance nearly went in following a deflection but Acosta followed his shot and got to the rebound first. His first-time pass squaring the ball to Brenner led to an easy finish and a needed breakthrough for the Orange and Blue.

In just over 30 minutes on the field, Acosta’s technical ability and, for lack of a better phrase, willingness to try stuff, made FCC more dangerous in the attack. As always, not everything Acosta tries comes off. Sometimes he’ll ignore an easy pass and try to take three defenders and lose the ball. That’s okay! Because when it works, Acosta’s ability gives the Orange and Blue an element no one else can. Take Friday night, for example. Acosta’s passing map shows he was on the ball in and around “Zone 14.” 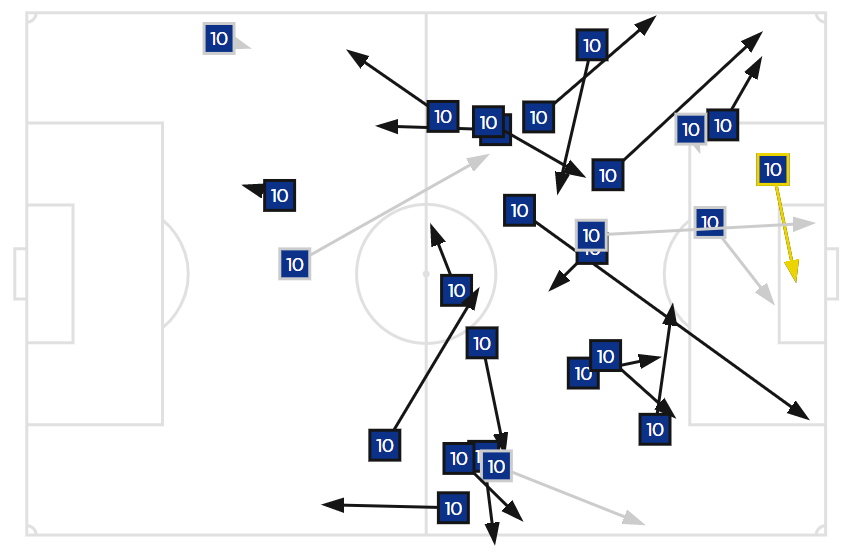 Even without Acosta’s talent, FCC has shown improvement under Noonan in creating chances from periods of possession in opponents’ thirds of the field. However, getting the ball to Acosta in a position where he can dictate play in those positions simply makes the Orange and Blue more dangerous.

Counter-pressing and quick transitions worked early in the season for FCC and still will. However, as the Orange and Blue become more of a known quantity, teams will adjust. Having a player with the ability, vision, creativity, and fearlessness of Acosta will help FCC break down teams who try to take away its strengths in moments of transition.

Brenner On The Upswing

Brenner’s first goal of the season couldn’t have come at a better time. Not only did the goal break a surely unwanted streak of not scoring but the goal also secured a big three points for the Orange and Blue. I wrote a little bit about Brenner last week as he returned to the starting lineup, partnering with Brandon Vazquez in a two-striker formation. Against Philadelphia, Brenner took on a deeper-lying role, looking to link play at the expense of getting on the end of scoring chances himself.

On Friday against Orlando, Brenner was effective in receiving the ball higher up the field and combining with his teammates. Vazquez remains FCC’s number one option on long balls from the back but Brenner played higher up the field, on the should of defenders more than against Philadelphia. He found pockets of space in dangerous areas and asked questions of Orlando’s defensive line. 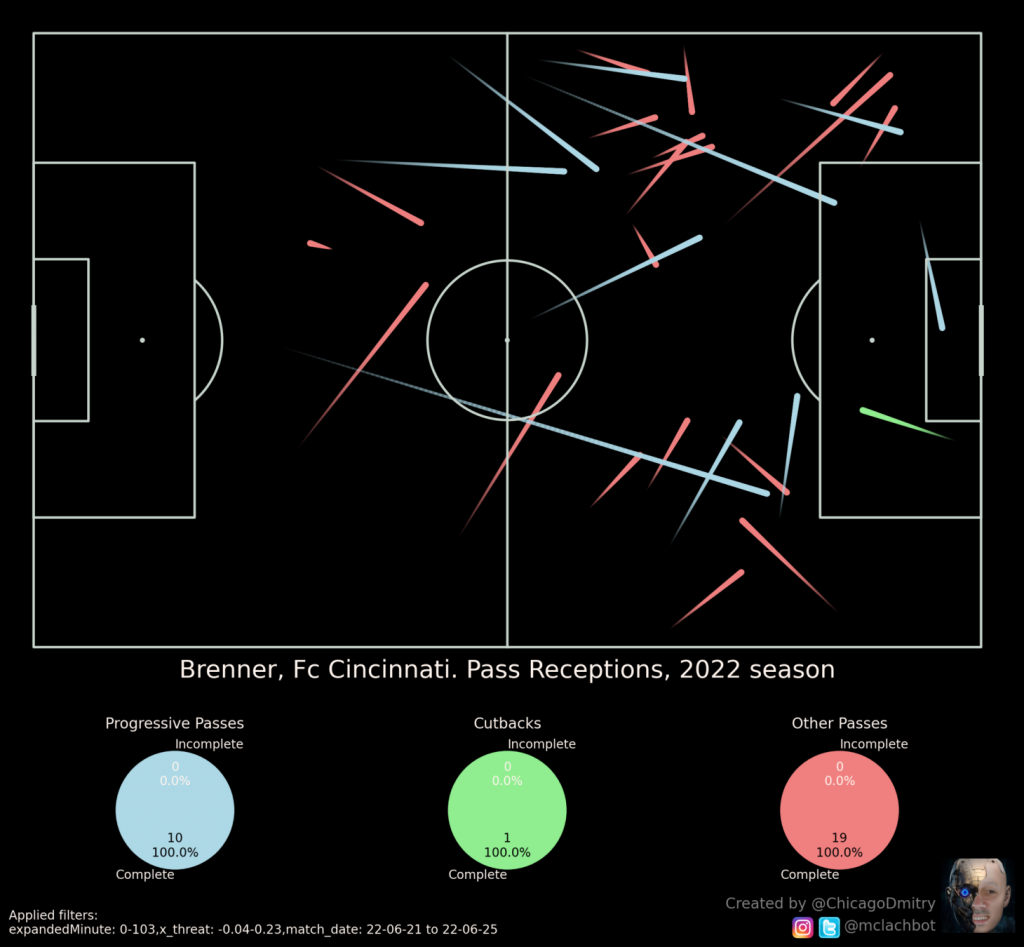 His goal was what we’ve been expecting from Brenner all along. A huge part of scoring goals is simply getting into the right spots at the right times. Brenner did that, finding a pocket of space at the goalmouth and tapping the ball into the net.

So far in 2022, Brenner has played 555 minutes. Even though he’s scored one goal, his chances on the year have been worth 3.7 xG and he’s created 1.1 xA for teammates. It bears mentioning that a significant chunk, 1.2 xG, of his total came playing against a 10-man Toronto FC team for more than 80 minutes. Even with that note, Brenner has produced at a very high level in an albeit very small sample size. Is it just noise or is Brenner on the verge of putting it all together? There are a number of factors that will impact the answer to that question, the first being whether Brenner will be in Orange and Blue long enough for us to find out.

As the summer transfer window heats up around the world, who knows where Brenner will end up. On Sunday, MLS Soccer’s Tom Bogert wrote, “Brenner, who scored the winner against Orlando, is the subject of interest in Brazil and Europe still. Cincy rejected an offer from Internacional in the winter. The feeling is that they’d be more open to a move this summer if the right valuation is offered. One to watch.”

However, and let me reiterate all the previous small sample caveats once again, Brenner could be on the verge of breaking out into something like the player FCC fans expected when he arrived before the start of the 2021 season.

Lastly this week, I wanted to draw some attention to a fun set-piece play that created an opportunity for the Orange and Blue. Early in the season, FCC seemed to struggle to create chances off of corners and in other dead ball situations. Noonan and his coaching staff seemingly took advantage of the international break to add to the playbook.

Against Philadelphia, Brandon Vazquez’s equalizer seemed to come off a designed corner play and FCC wasted no time in trying another one against Orlando.

The routine starts with Haris Medunjanin lined up over the ball in the corner. Álvaro Barreal made a run across the front of the goal all the way past Orlando’s defender on the front post while Brenner stood at the top of the 18-yard box. Medunjanin pinged a low ball directly to Barreal who cushioned a one-touch pass into empty space in the box. Brenner’s marker stopped tracking him as the Medunjanin put the ball into play and Brenner looped around and had an uncontested shot 16 yards from goal.

Brenner’s shot went wide, and as you can see, Orlando had defenders positioned between the goal line and Brenner’s shot, meaning even an on-target strike might not have made it. Even though the play didn’t result in a clear-cut chance, the creativity on set-pieces is great to see. Doing everything possible to maximize scoring opportunities is always a good strategy. Let’s hope Noonan and his coaching staff have some other ideas to make set pieces just a little bit more dangerous.