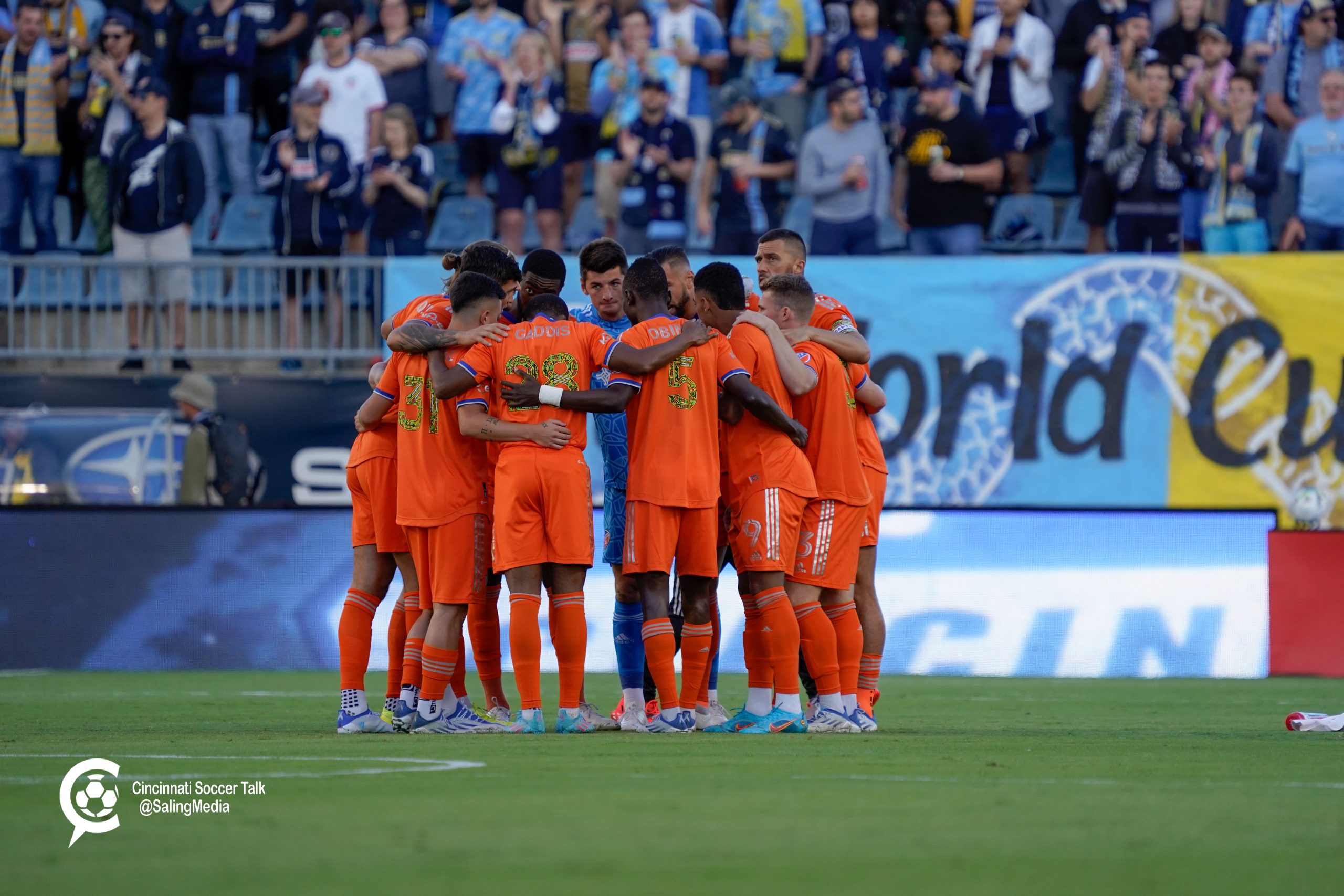 Brenner and a change in formation boosted FCC vs Philly

FC Cincinnati returned from the international break and earned a well-deserved point against the Philadelphia Union. The Union probably created the more dangerous chances on the whole but the Orange and Blue controlled long stretches of the match. After the final whistle and looking at the box score, a draw seemed to be a pretty fair result.

First, take a minute to appreciate that. Go ahead and reread the previous paragraph if you need to. FCC went on the road to one of the best teams in the Eastern Conference and earned a very fair point. Not only that, the Orange and Blue played like one might expect the home team would, controlling possession and dictating the game.

Tired legs seemed to catch up with FCC in the second half but its defense still largely denied the Union clear goal-scoring opportunities. Even as the home team became the aggressor, FCC was still dangerous on the counter, nearly coming away with a goal in the final ten minutes that would’ve in all likelihood meant three points instead of one. So what buttons did Pat Noonan and Co. push to put FCC in an advantageous position?

Noonan’s choice to return to a three-center back system meant a numerical advantage for the Orange and Blue when the Union looked to counter towards its two forwards. As the Union looked to play directly after turnovers, FCC’s centrebacks cut out long passes, winning 10 of 13 aerial duels, and ensuring possession stayed in the Union’s defensive half.

In possession, FCC took advantage of the Union’s narrow 4-4-2 diamond shape by playing wider and progressing the ball up the wings after switches of play bypassed Philadelphia’s midfield.

After the game, Noonan said, “I think it was just the spacing, it was the ways in which we found switches of play, whether it was through the middle, whether it was around, I thought that was going to be important in us being able to play higher up the field.”

According to Football Reference, the Orange and Blue completed 20 switches against the Union, defined as passes traveling 40 or more yards across the width of the field. Álvaro Barreal, deputizing for Lucho Acosta, and Brenner combined to complete 11 of those switches. Lots of those switches found one of FCC’s wingbacks on the other side of the field with room to operate.

The Union’s narrow 4-4-2 diamond congested the middle of the field when the Orange and Blue was in possession. To counter the Union’s high pressure, Pat Noonan pushed FCC’s wingbacks higher up the field and relied on switches of play to navigate past the press. John Nelson and Ray Gaddis found more space in more aggressive positions than they have previously.

Nelson was a threat on the left side, his 30 touches in the final third were the second-most on the team in the match, and Gaddis’ operated from the middle and final thirds on a regular basis. Both players made major contributions to Cincy’s ball progression efforts.

After the game, Noonan said, “It was also the ways in which we could play centrally from those wide channels to be able to put them under pressure and not rely on just wide service over and over. So, credit to the players for having the composure to move the ball in certain ways to allow us to play in their half of the field.”

FCC’s wingbacks were key to Noonan’s tactical plan working. Nelson and Gaddis were frequently open because of the narrowness of the Union’s midfield. Shifting play by either switching the ball directly or a quick horizontal shift across the center back line put FCC’s wingbacks in open space to drive the game forward. 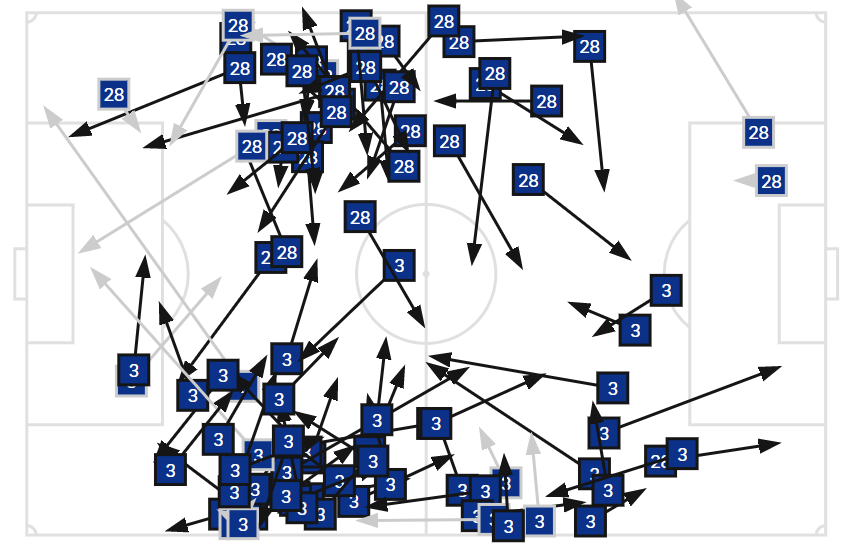 Importantly, like Noonan said, Nelson and Gaddis didn’t look to cross the ball from those advanced positions. By finding teammates centrally, the Orange and Blue could look to create consistently dangerous attacking patterns of play. The Union, with two of MLS’s best center backs and an excellent defensive midfielder, and paired with the absence of Acosta, FCC’s best creator in the final third, meant FCC had little joy in creating dangerous opportunities from open play. However, the tactical adjustment from Noonan to build possession from the outside of the field in worked against a very good team playing at home.

Brenner returned to the starting line-up to partner with Brandon Vazquez in a two-striker formation. His 2022 season has been marred in no particular order by Green Card issues, injuries, transfer rumors, and internal team discipline. Hopefully, his presence as a starter is a sign of things to come because Brenner did a lot against the Union that made FCC a better team.

Without Acosta, Brenner dropped deeper, looking to help in build-up play while Vazquez stayed higher up the field. As mentioned above, Brenner’s five switches helped FCC shift the point of attack away from the Union’s press. The positions where he got on the ball were not what you might expect from a striker but Barreal’s willingness to push forward from midfield to join the attack balanced out some of Brenner’s willingness to find the ball in midfield. 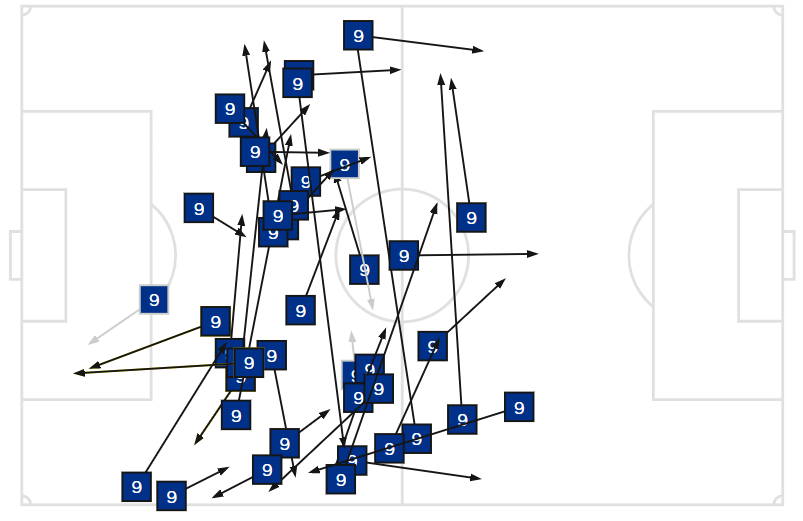 Plus, with Vazquez still operating as the main target up front, Brenner could find pockets of space to get on the ball and influence the game. He ended the night with a team-high seven shot-creating actions. There were instances where he looked a little slow on the ball or out of rhythm with teammates. However, his 76 minutes against the Union were his most since he played 77 minutes on April 24 against LAFC.

We haven’t seen enough of Brenner on the field to have a fully realized partnership with Vazquez. Hopefully in the next couple of weeks, especially with the return of Acosta, Brenner and Vazquez will find that little bit more chemistry that will help the Orange and Blue break down defenses and score more goals.