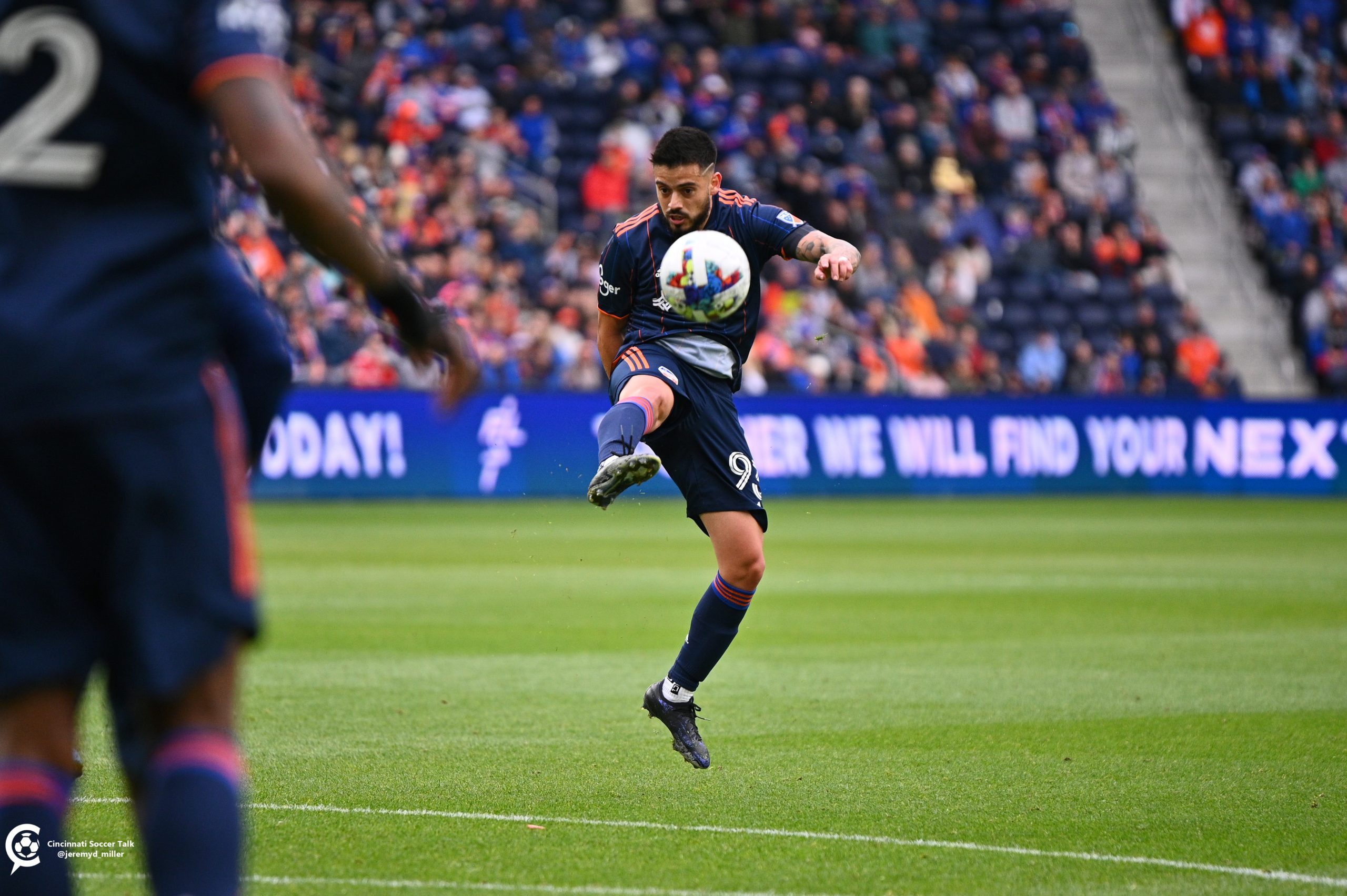 FC Cincinnati scrapped a 2-1 win against Toronto FC on Saturday finally taking advantage of set-piece situations. Toronto controlled long stretches of the match but didn’t threaten the Orange and Blue to the extent one might expect based on its 65% possession. FCC’s defensive work limited Toronto to 11 shots, with just three on target, worth 1.2 expected goals (xG). Toronto’s goal, by far its best chance of the game (0.32 xG), might have been offside but the call stood after a VAR review, which likely could not overturn the initial ruling on the field.

Offensively, FCC didn’t produce all that much, finishing the match with 1.1 xG on seven shots. FCC’s only two shots on target both ended up in the back of the net.

With Saturday’s result, FC Cincinnati is just one win shy of equaling last year’s total though we’re just nine games into the 2022 season. As Matt Doyle noted in his column on MLS Soccer dot com, FCC’s start isn’t a fluke either. If anything, based on the underlying numbers, supporters of the Orange and Blue can feel a little hard done by that the club doesn’t have more points on the board.

Currently, FCC ranks 8th in the Eastern Conference and 16th in MLS in expected goal differential (xG-xGA). We’re quickly approaching the number of games where these sorts of numbers start to mean more, as well.

Here’s how 2022 compares to previous MLS seasons for the Orange and Blue. Clearly, this season’s version of FCC is performing at the highest level we’ve seen in MLS. I’m not saying this season’s team has been good or even great but the improvement is there, clear to see. 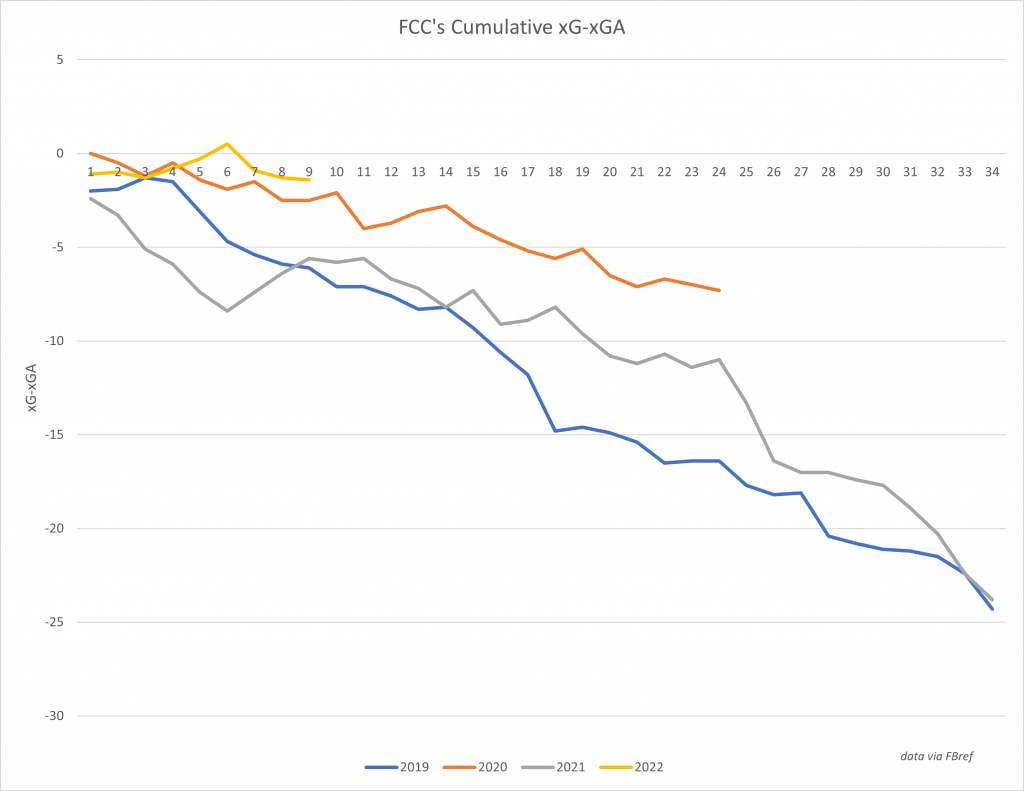 Is FCC, as currently constructed, good enough to make a playoff run? We’ll find out later in the summer. However, just finishing 2022 as a mediocre side, and having that position backed up by the underlying numbers, would be a major accomplishment for Chris Albright and Pat Noonan. I think lots of supporters would agree, too. At least I know I would. Now onto some other things that caught my eye from Saturday.

Junior Moreno Did Some Of Everything

Junior Moreno does lots of things to help FCC that don’t necessarily appear in the box score. Saturday was an exception. He was dominant in midfield on both sides of the ball. According to Football Reference data, he recorded 10 tackles and interceptions and tied for the team lead with 12 loose ball recoveries. For a second straight match, Moreno was more active pressing opponents with the ball, finishing the match with 26 pressures. More importantly, FCC won back possession after 11 of those. 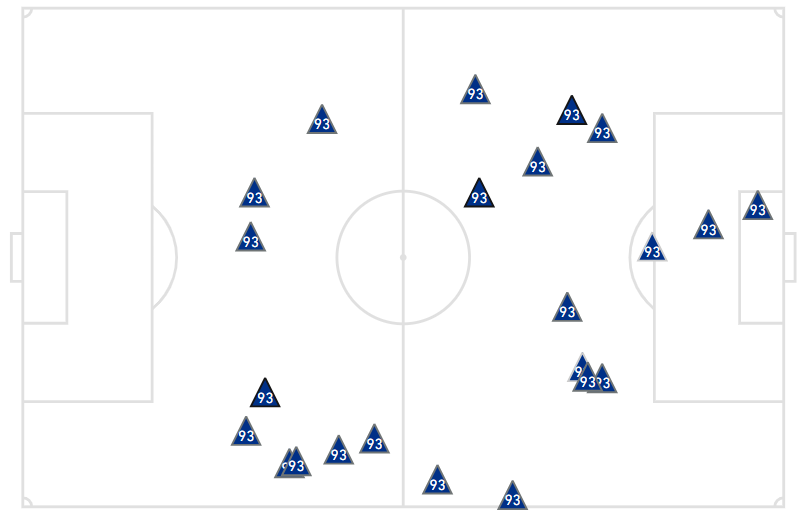 Moreno was also one of the Orange and Blue’s most effective passers too. He was FCC’s best ball progressor on the day, tallying five progressive passes and three completed passes into the final third of the field. His clipped cross off a short corner to Nick Hagglund at the back post was part of a great set piece, resulting in Ian Murphy’s opening goal.

In a game where FCC struggled to keep the ball, Moreno formed a solid partnership on the left side, completing passing triangles, at the top of a triangle playing out of defense to the base of triangle with Álvaro Barreal and Lucho Acosta higher up the field. Moreno isn’t going to be asked to make the killer pass too often. But having him recycle possession has made FCC better this season. How Noonan and the rest of the coaching staff utilize Moreno and Obi Nwobodo remains to be seen but Moreno’s out-of-character emphatic performance on Saturday was a continuation of his mostly quiet but very solid 2022 season.

Our First, Albeit Short, Look At Obi

We got our first look at new Designated Player Obinna Nwobodo on Saturday when he subbed on for Haris Medunjanin to see out the final 24 minutes of the match. I wrote about what Nwobodo could bring to the Orange and Blue after his signing was announced but it’s another thing to see him on the field.

Unsurprisingly, he looked the part of a DP midfielder in his brief cameo. Defensively, his 11 pressures (5 successful) in 24 minutes, two tackles, and one interception helped see out the game as Toronto pushed for an equalizer. The eye test backed that box score production up. Nwobodo’s work rate was as advertised. Even with the super small sample of Saturday, we can take even less from Nwobodo’s debut as it relates to how he fits in going forward as FCC was just trying to run down the clock for much of his time on the field. As he gets more time on the training pitch in addition to game minutes, we should expect chemistry with teammates the develop as well as comfort in Noonan’s overall tactical structure.

How Noonan chooses to line up his midfield going forward will be very interesting. The nearly 25 minutes we saw of Nwobodo and Moreno playing in a double pivot against Toronto were pretty good. The possibility of Nwobodo and Moreno set up behind Acosta and Kubo in a 4-2-2-2 shape is the most interesting to me right now, however, that possibility would be even more appealing with a healthy Rónald Matarrita at left back. John Nelson has looked solid in the role but FCC certainly misses Matarrita’s attacking drive and the width he can provide.

FCC will have just a few days to incorporate any lessons learned from Saturday as they take on Toronto at TQL Stadium on Wednesday night. With some promising news on the injury front, Noonan should have more flexibility to move away from the 4-2-3-1 shape he’s favored over the last two matches, if that’s his want. Dom Badji continues to take on any challenge no matter where on the field but seemed to struggle to find the game on the right wing (25 touches in 89 minutes) against Toronto. Brandon Vazquez’s return to the field as a substitute was promising as we might be closer to an extended run of the Brenner-Vazquez partnership I’ve been waiting for.

One last thing to keep an eye out for on Wednesday is how much FCC chooses to press Toronto. Obviously, Toronto dominated possession but FCC didn’t sit back and make it easy. FCC’s 275 pressures on Saturday was a season high, 82 more than the previous mark. With the short turn around, it might make sense for Noonan to dial back that pressure a bit. Obviously a healthy Kubo in the starting lineup or 60 minutes from Nwobodo would lessen the burden on the rest of the squad.