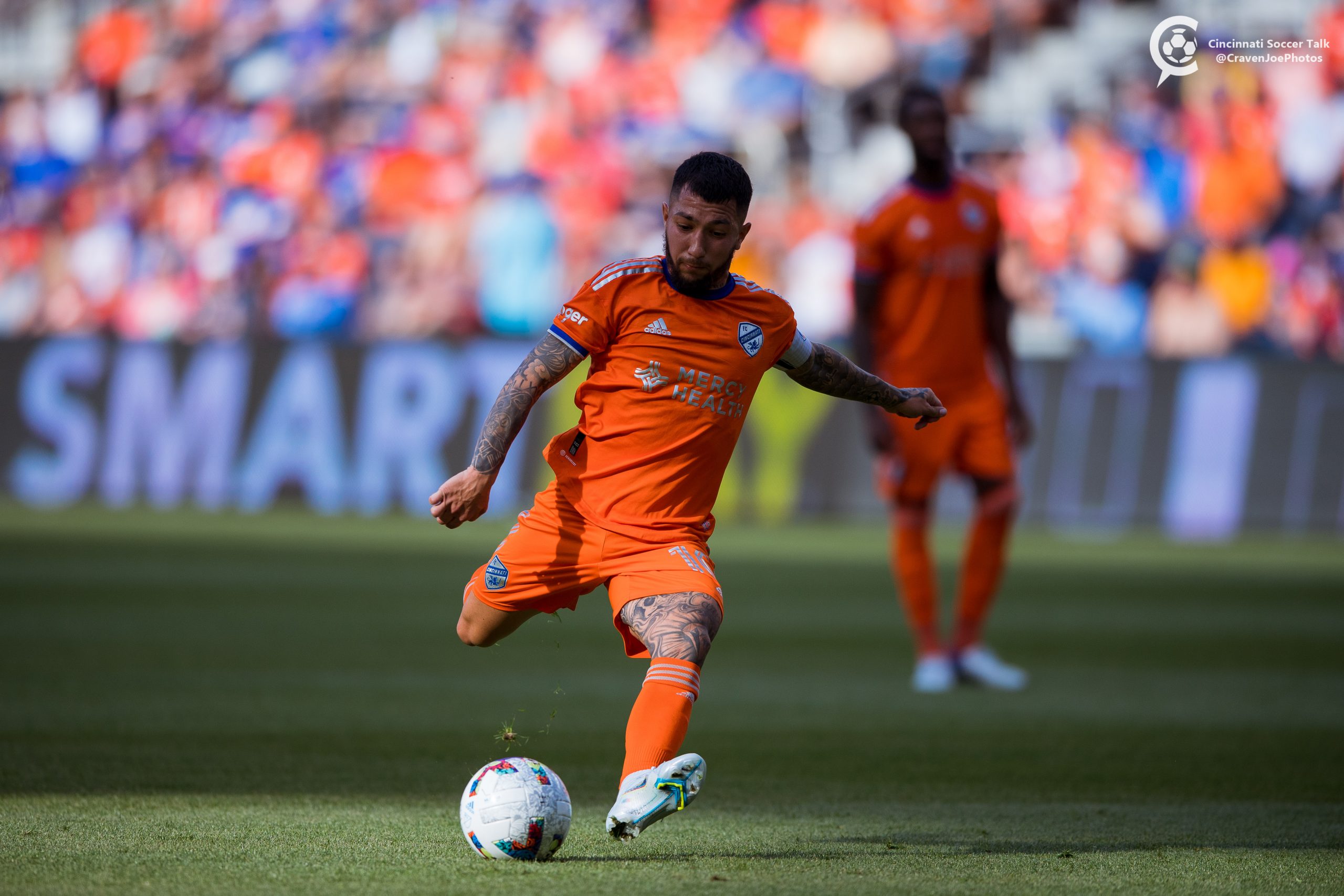 FC Cincinnati take three away in Toronto in the first leg of a double match.

FC Cincinnati was able to survive an ending onslaught by the Bob Bradley-led Toronto FC to take home a 2-1 win and the full three points. At the time of writing, this win pushed FCC into a three-way tie for seventh place on the Eastern Conference table.

The match started evenly. Both FCC and Toronto were free to use some of the space available in the midfield.

Neither team really capitalized on it early to get decent chances on goal, however. The first stretch of the match saw both sides get close to the box but then get sheepish and either shoot a long-range effort that did nothing or dribble and lose the ball.

FCC had the better of the chances early, as they got close to the penalty area, but just weren’t able to get that final connection/pass/touch to get in a great area for a clear-cut chance.

Dom Badji had some great runs and looked threatening, as his speed and power mix to create a good threat against center-backs and full-backs. One run especially in the half showed this perfectly, as he got away from his mark and was fed the ball and nearly completed it had it not been for a couple of touches making his shooting angle too tight. Badji getting in these areas should be a key and it was shown why in this first half.

Toronto started to gain momentum in the middle parts of the half and find more of the ball. However, they were fine to pass it around the box and wait for the perfect chance. They had multiple moments where I thought a shot would have been on but instead decided to try and make it perfect.

Toronto really let FCC have it in the 30-minute range, with their passing and speed really showing FCC’s lack of it on defense. They were passing well in the final third and Cincy had to stay consistent on closing down and tightening up the space. FCC did a good job of not fouling in dangerous areas and also playing as a cohesive unit knowing where each player was at the right moment.

FC Cincinnati was finally able to take the lead in the waning moments in the half on a set-piece opportunity. Yes, you read that right. Acosta hit the ball short to Moreno at the top of the final third, who sent it into the box. Hagglund got on the end of it and hit it to the penalty area where rookie CB Ian Murphy beautifully hit it into the back of the net. This was a great end to the half and allowed FCC to feel good about itself going into the locker room.

The second half started with Toronto getting a majority of the ball. However, that didn’t last for long.

The Orange and Blue doubled its lead in the 50th minute of the match thanks to a throw-in. Many times, FCC calls in Alvas Powell for a long throw, and this was why. Powell threw the ball to Acosta inside the box, who then worked his magic. Acosta dribbled through the defense brilliantly to find a hard-angled shot and then took it and the ball went into the back of the net.

Following this goal, in the immediate future FCC nearly got another goal to put the match away. That didn’t last for long, though, as Toronto really put on the pressure.

The intense pressure was bound to lead to a goal at some time, and that happened in the 66th minute as Jesús Jiménez landed that goal.

For the rest of the match, FCC was defending as its life depended on it, and the defense mostly did a great job as a collective to make sure everyone was on the same page.

Haris Medunjanin had a great match and commanded his space well, and the player that replaced him, Obinna Nwobodo, making his FCC debut, also had a couple of vital moments to help lead FCC to the win.

Overall, this was a really good win by Cincy. However, there are a couple of things the team needs to work on. The most important thing is its ability to waste time. The team’s possession and clock management were absolutely atrocious in the waning moments of the match. Instead of trying to get a goal in the last moments, they should have tried to hit the ball to the corner. This aspect of their game nearly cost them the three points. This has to be fixed.

FCC’s finishing also must improve. Again, the team had some breakaways that should be finished in the back of the net but weren’t, specifically the one at the end of the match where neither Vazquez nor Barreal had a real shot on goal

This was a great win, but it’s even better when you can improve after a win, and that’s where this team is at right now. This team’s path is looking good.