Chris Albright completed the first major signing in his tenure at FC Cincinnati, signing midfielder Obinna Nwobodo as a Designated Player from Turkish Süper Lig side Göztepe S.K. In FCC’s release announcing the signing, manager Pat Noonan said, “Obinna is an elite ball-winning midfielder that adds a different dynamic to our team…His ability to break up plays, combined with his forward-first mentality make him an excellent addition to our group.”

Let’s take the first part of Noonan’s quote first. The Orange and Blue have needed a ball-winner in midfield since, well, it joined MLS. With Albright and Noonan looking to impose an aggressive style, heavily featuring pressing and direct attacking in transition, the need for a true ball-winner has only increased. Nwobodo should add value when FCC presses opponents. As FCC noted, Nwobodo’s 772 pressures, 121 tackles, and 432 ball recoveries led the Süper Lig this season.

Our new DP by the numbers. 👀 pic.twitter.com/fVFHUCIMb0

At the time of writing, Göztepe sits in 19th place in the Süper Lig table and on the brink of relegation. Nwobodo’s defensive statistics surely benefit from playing for that’s had to do a lot of defending this season. Still, Nwobodo has shown he can hold his own playing against competition involved in the highest levels of play in Europe. Unfortunately, Football Reference does not have advanced statistics for the Süper Lig. However, using information from Wyscout, we can get a more well-rounded view into Nwobodo’s game.

FCC’s press has succeeded at times this season but adding a player who can contribute in the press and then, if it doesn’t succeed, has the athleticism to track back and break an opponents’ advantage will be a major boost for the Orange and Blue. Nwobodo’s work rate, athleticism, and clear understanding of how and when to press should improve FCC’s already pretty good high press from the moment he makes his debut. 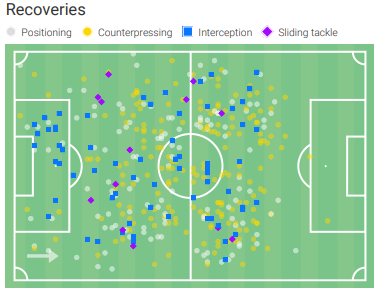 Nwobodo’s ball-winning will be important not just in more advanced areas of the field. Because FCC is so willing to commit players forward in moments of transition, having a defensive midfielder like Nwobodo at the base of the midfield to break up play after turnovers is vital. As you can see, Nwobodo is adept at winning the ball back in his own third of the field as well. In the last year, Nwobodo won 94 defensive duels in his defensive third and lost 71. Of those 71 losses, 20 led to shots and just two goals (on 1.4 xG).

Noonan also referenced Nwobodo’s “forward-first mentality.” Though we’re just six matches into the Albright/Noonan era, a staple of FCC’s attacking strategy has been to look for attacking opportunities through quick transitions following turnovers. Given Nwobodo’s ability to win the ball back, it’s worth considering how effective he’s been with the ball at his feet.

This season, his 6.62 progressive passes ranked 45th in the Süper Lig, a decent enough number as he likely won’t be the number one ball progressing option in the Queen City. On the other hand, he averaged just 0.65 progressive runs per match, 110th in the league, so he might not offer marauding runs from deep with the ball at his feet. In November, FCC Analysis noted Nwobodo was “erratic on the half-turn” (props for identifying him as a target so early on) with the ball. Playing at the base of the diamond, Nwobodo should have easy passing options, both ahead and behind, to play out of danger.

What Nwobodo does in counterattacking situations should pique the interest of FCC supporters, too. If his defensive work rate is as advertised, we should expect Nwobodo to be in prime positions to launch attacking transitions. 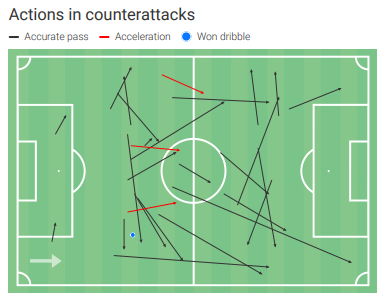 Based on that, Nwobodo should fit FCC’s attacking system by either finding an easy pass to a more advanced midfielder or looking for a more aggressive line splitting pass to the Orange and Blue’s forwards when the situation presents itself. He likely won’t be asked to orchestrate the offense in possession but he’s shown the ability to make the right decision.

So far, Pat Noonan and his staff have put FCC players in positions to succeed and we should expect that to continue with Nwobodo. His defensive abilities, both in the press and covering in transition, should be spotlighted. Going forward, Nwobodo will have the opportunity to spring counter-attacks and make runs from deep in certain situations but we probably shouldn’t be expecting him to act as a deep-lying playmaker, at least not right away.

Overall, Albright and Noonan seem to have found a solution to the glaring need in defensive midfield. The use of a Designated Player slot on Nwobodo is certainly a risk, but there are few certainties when bringing in new signings. At the very least, Nwobodo should provide something FCC supporters haven’t seen in MLS: a true ball-winning midfielder.