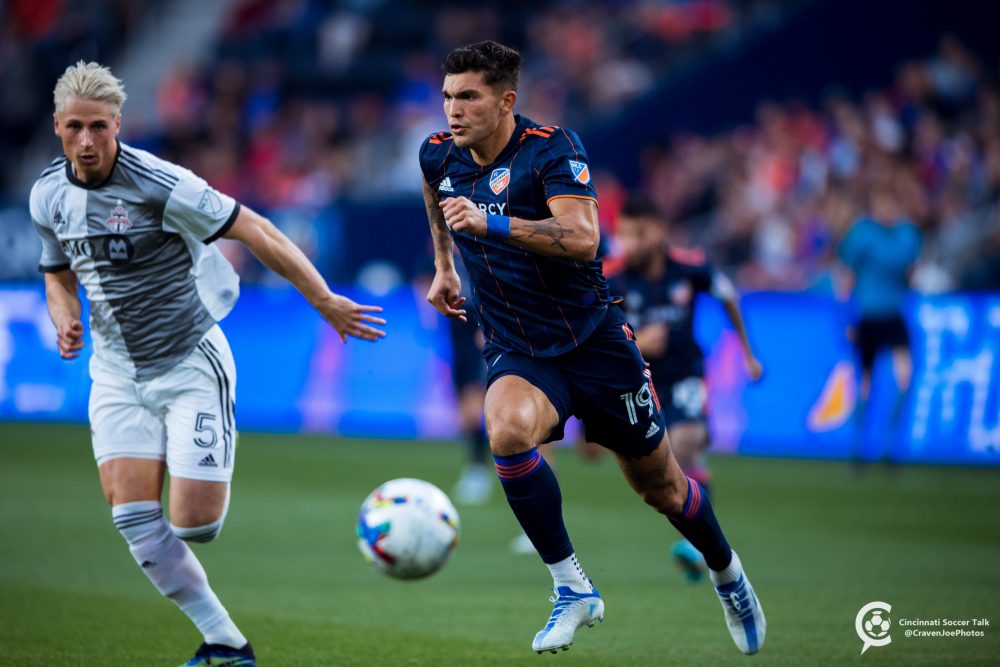 For the first time since 2018, FC Cincinnati’s last opponent was their next opponent.

After taking a 2-1 decision in Canada, FC Cincinnati (4-1-5, 13 points) returned to TQL Stadium and obtained a similar result. The Orange and Blue rode goals by Calvin Harris and Luciano Acosta to take a 2-0 victory from Toronto FC (3-2-5, 11 points).

The FC Cincinnati Starting XI returned to the pitch with some notable changes. Brandon Vazquez returned to the top of the formation as the lone striker, while Obinna Nwobodo made his starting-lineup debut. Toronto’s Starting XI had some recognizable absences, as Jonathan Osorio, Chris Mavinga, Ifunanyachi Achara, and Carlos Salcedo were out due to injury and health protocols.

The first ten minutes of the first half was painted completely in Orange and Blue. In the 2nd minute, Calvin Harris completed a cross from Brandon Vazquez to score past Alex Bono. The goal was FC Cincinnati’s fourth-fastest goal in MLS play, but more importantly, it was Harris’ first MLS goal after losing a part of his 2021 rookie year to injury.

The potential for higher scoring increased in the 6th minute when Toronto’s Ralph Priso was carded for a high tackle against Nwobodo. After VAR checked the studded tackle, the yellow card was upgraded to red, forcing Toronto to play with 10 men for the rest of the match.

The best opportunity in the first half almost came directly after the play restarted. In the 8th minute, Alvaro Barreal attempted a cross from the right, but Lucho Acosta popped the sliding shot high. Harris would get another shot to add to his account in the 39th minute, only for his soft attempt in the box to float into goalkeeper Alex Bono’s arms.

Much like last year, FC Cincinnati left the door open for Toronto to possess the ball in the attacking third. Toronto’s best attempt came in the 35th minute when Jesús Jiménez tried a shot between two defenders, only for goalkeeper Roman Celentano to dive to his left and smother the attempt.

While FC Cincinnati took advantage to enjoy much of the possession late in the first half, Toronto held an advantage in shots (8-7). However, only two of Toronto’s eight attempts were inside the box, while all but one of FCC’s was in the box.

The second half produced a much different vibe, as FC Cincinnati started to take advantage of width and space in the field. Nwobodo and Junior Moreno began to assert more control in the midfield, while TFC was forced to retreat more from pressure.

The dam finally burst from penetration into the box. In the 54th minute, Barreal controlled a cross from Acosta in the box and was pulled down by Toronto’s Kadin Chung. It took some time for the penalty kick to start, but Acosta slammed a shot past Bono’s right for a 2-0 lead. The goal was Acosta’s fourth of the year and his third in three matches.

The xG battle (4.54 – 0.49) was highly skewed towards FCC in the end, as the team has opportunities to put more on the board. Barreal appeared to score in the 69th minute, only for the goal to be waved off from a Brenner offside call.

Toronto’s only real threat in the second half was an Ayo Akinola header in the 78th minute, only for Celentano to palm the shot over the net. Much of the game was salted away by the midfield, resulting in the 2-0 final.

The win thrusts FC Cincinnati up into sixth place and drops Toronto to ninth. The Orange and Blue’s fourth win of the season also match their entire win total from last season (4 wins in 34 matches). Interestingly enough, four of the eight total wins from the 2021 and 2022 seasons have now been against Toronto.

FC Cincinnati will now embark on a three-game away slate over all competitions, heading to Minnesota United this weekend. Toronto will travel to Vancouver for a match on Sunday against the Whitecaps.