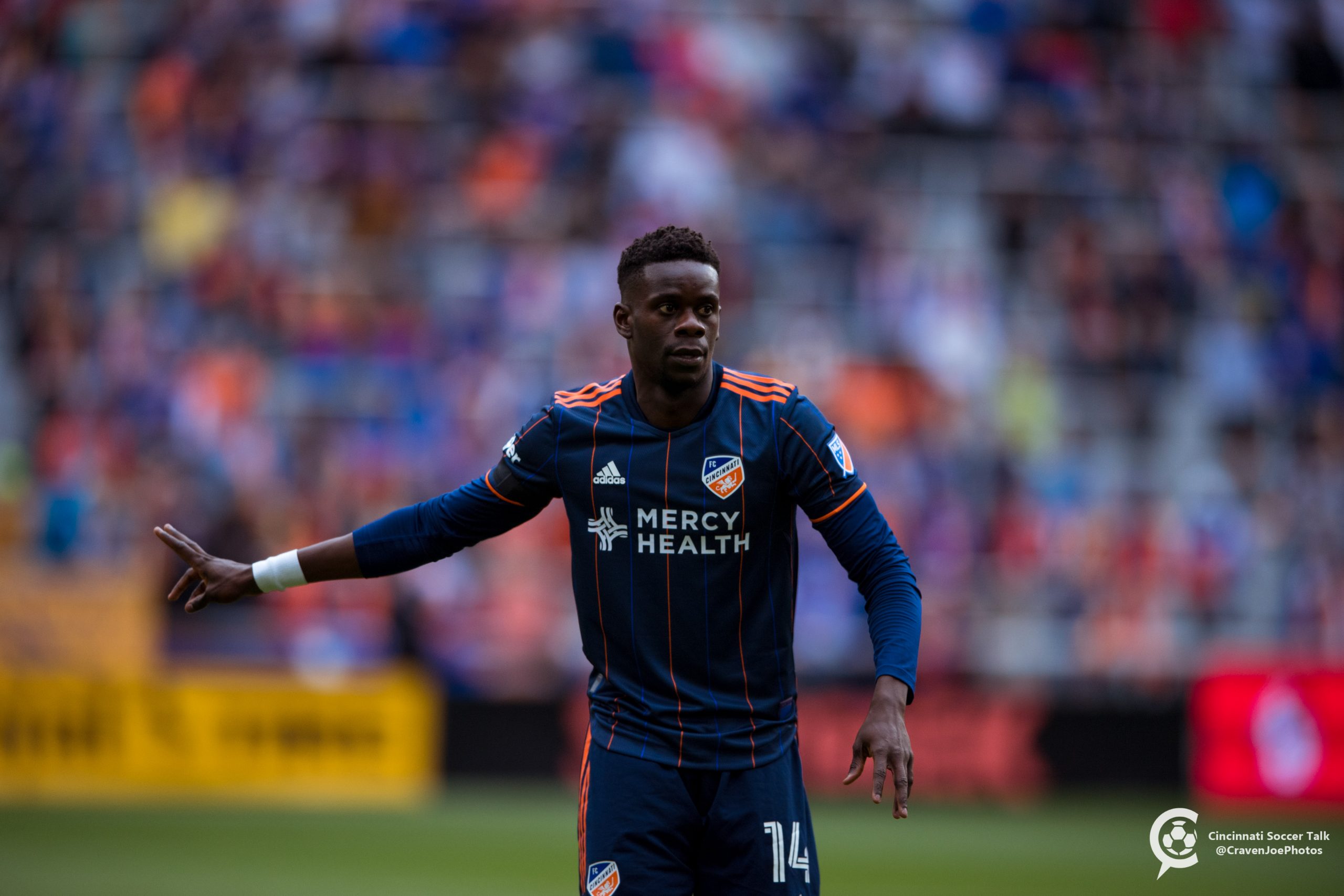 FC Cincinnati scrapped out a scoreless draw away at Atlanta United on Saturday night with contributions from a variety of players. Alec Kann stepped up when he needed to, including saving a Marcelino Moreno penalty in the 63rd minute. FCC’s backline limited Atlanta to few quality scoring opportunities throughout the match and the whole squad stepped up after Nick Hagglund was sent off in the 76th minute to keep the game scoreless. Offensively, the Orange and Blue created a couple of golden scoring opportunities, getting the ball to Brandon Vazquez and Brenner in dangerous positions.

Brenner’s Return To The Starting XI

Brenner returned to the Starting XI in Atlanta and looked like a player who could be a major contributor going forward in 2022. In his 81 minutes, Brenner took 4 shots worth 0.6 xG according to Fbref. He got into good positions to take shots, dropped deeper in the build-up, and chipped in defensively. Brenner’s technical quality offers FCC something different as the Orange and Blue look to break down opposing defenses, either in transition or when opponents have players between the ball and goal. Just look at the sequence leading to Brenner’s best opportunity of the match courtesy of Wyscout: 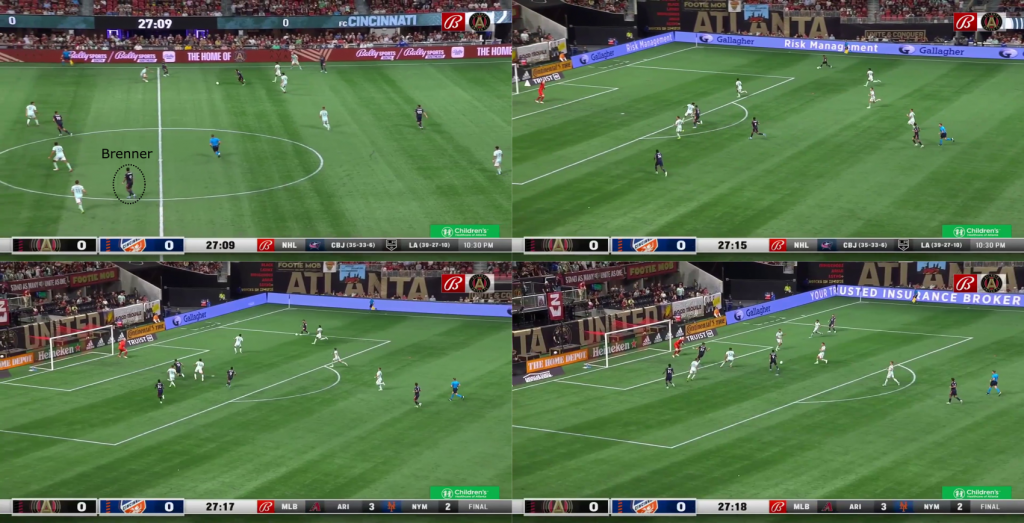 There’s nothing fancy here. Brandon Vazquez is leading the line while Brenner sits a little bit deeper. FCC broke through Atlanta’s press through a nice interplay between Ray Gaddis who played the ball to Yuya Kubo with room to push forward. As the play developed, Vazquez stayed in a more advanced position, drawing the attention of Atlanta’s center backs with Brenner still trailing close behind. After his forward run, Kubo laid the ball off to Lucho Acosta on the right wing. Acosta dribbled into the box, Vazquez made an aggressive, near post run, and Brenner angled his run to the penalty spot. Because Atlanta’s midfield was caught upfield in the press, no midfielder was able to make up ground on Brenner, leaving him a shot from the middle of the box. Unfortunately, an Atlanta center back blocked the shot and Vazquez was offsides and in the way of Brenner’s follow up effort.

However, this pattern of play seems like it should be fairly repeatable. Vazquez leading the line and making the first run and Brenner reacting and finding space after defenders react fits the style of play of both FCC strikers. Vazquez already has demonstrated an ability to get into dangerous areas and, paired with Brenner’s sense of space in the box, their strengths should accentuate each other.

When FCC released the lineup an hour before kickoff, Dom Badji looked like the latest left back in Pat Noonan’s ongoing experiments to replace Rónald Matarrita. It didn’t quite work out that way. Badji seemed to operate as more of a midfielder, either wide or centrally, when FCC defended deep, with Tyler Blackett defending as a more traditional left back. However, after Nick Hagglund’s second yellow card, Badji moved to the right side, and played right back as FCC saw out the scoreless draw. Clearly, Badji’s defensive contributions spanned the whole field. 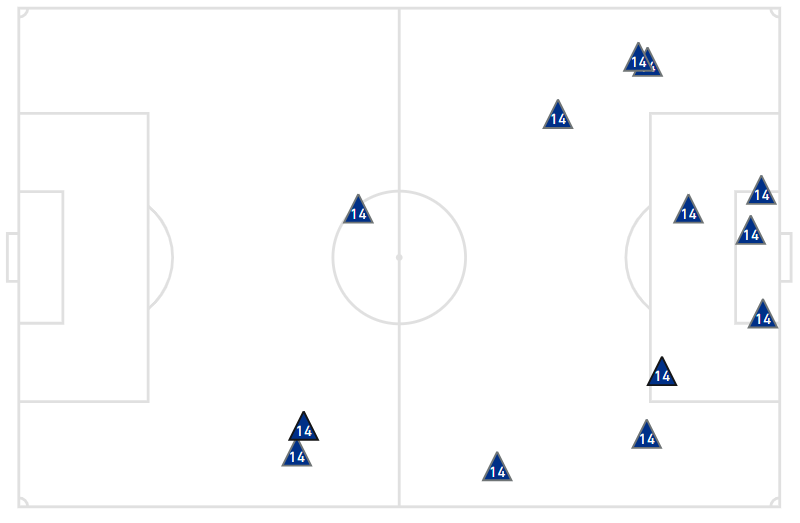 Badji finished the match with seven tackles plus interceptions and ten clearances, the most on the team. With injuries depleting FCC’s fullbacks, having a player as adaptable as Badji has been vital for Noonan and his staff. As Brenner’s match fitness continues to improve, Badji might find minutes more limited on the front line but having a player who can contribute all over the field will ensure Badji’s continued playing time.

Value From The Draft

The 2022 MLS Draft was one of Chris Albright’s first opportunities to put his stamp on the Orange and Blue. All three FCC draft picks, Roman Celentano, Ian Murphy, and Nick Markanich earned contracts with the first team. Unlike previous FCC drafts, Albright seems to have nabbed immediate contributors, something vitally important given MLS’s roster rules, salary cap, and long season in the hottest part of the year.

Ian Murphy started in place of an injured Geoff Cameron on Saturday at his natural position, center back. He was really good. Murphy brings athleticism to the position but played within the system, not exposing the backline through mental mistakes. His eight ball recoveries trailed on Lucho Acosta’s nine for the team lead for outfield players. Murphy wasn’t asked to do much passing, deferring to Tyler Blackett most often, but Murphy seemed to consistently make the right decision throughout the match. Early signs indicate that Albright identified a solid, domestic center back with the 14th overall pick in the draft.

Nick Markanich, the 30th overall selection in the draft, was featured on Saturday as well. Though he only played nine minutes against Atlanta, Markanich has shown promise early in the 2022 season. In just 83  minutes, he’s amassed 0.8 xG on five shots. The sample size is absolutely way too small to be drawing any conclusions but Markanich certainly passes the eye test on the field. He looks like he’s able to compete physically with MLS defenders, and has already shown on a couple of occasions a knack for getting into dangerous positions in the penalty area.

Roman Celentano, the #2 overall selection in the draft is the only draftee who hasn’t yet featured for the first team. Celentano has been logging minutes for FCC2 and showing why he was taken so highly.

Allowing Celentano to play professional minutes in Cincinnati, as opposed to on loan, should be a boon for his development. FCC can afford to bring him along slowly too, given Alec Kann’s solid performances in goal. Hopefully, Celentano will join Murhpy and Markanich in making his first team debut tonight against Pittsburgh in the U.S. Open Cup.

When he took over as General Manager, Chris Albright needed to add talent at every level of FCC’s roster. So far, it seems like he’s been pretty successful adding depth pieces, and the recent news of Obinna Nwobodo’s signing as a Designated Player should bring high-level talent as well. Even if Celentano, Murphy, and Markanich top out as rotation pieces, Albright will have done tremendously well. The high-priced signings will be crucial for overhauling the roster but don’t overlook the newfound depth available for FCC.