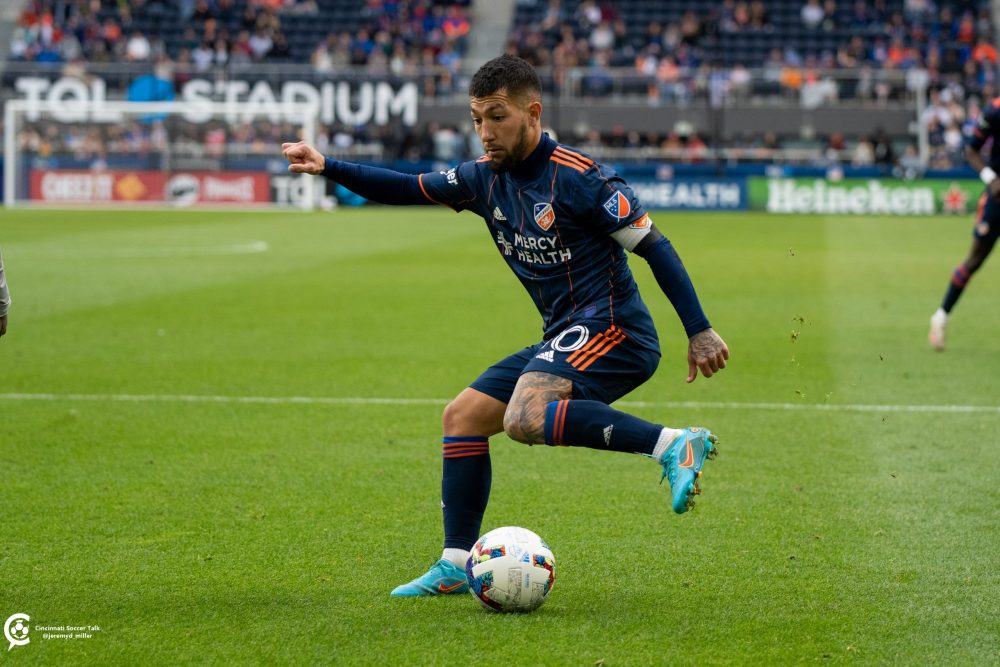 FC Cincinnati outlast Pittsburgh and win it in 2-0 in extra time.

It took 30 extra minutes to close the chapter in the 3rd round of the U.S. Open Cup, but FC Cincinnati rode two added-time goals by Alvaro Barreal to knock Pittsburgh out of the tournament, 2-0. While the Orange and Blue needed to get their feet settled in the second half, Head Coach Pat Noonan made proper adjustments to change the possession battle and get FC Cincinnati to advance.

FC Cincinnati entered the 3rd round with hopes of reclaiming past glory in the Open Cup. The Orange and Blue had never lost in the opening round, but they also had to sweat out wins in the past. Three of their four opening Open Cup matches needed extra time for FCC to advance (2017 vs. AFC Cleveland, 2018 vs. Detroit City FC, 2019 vs. Lou City).

Pittsburgh came into the match with mixed momentum. The Riverhounds passed with flying colors in the 2nd round of the Open Cup, beating Maryland Bobcats FC 2-0 at Highmark Stadium. However, their last regular-season match at Las Vegas resulted in a rare loss, a 1-0 defeat to the Lights on Saturday.

Noonan opted to give much of the bench play on the pitch. Much of the goal production in MLS play was given the night off, as Brandon Vazquez, Dom Badji, and Brenner were left off the lineup cards. Roman Celentano saw his first start in goal, as Alec Kann was on the bench and later removed as a healthy scratch.

Pittsburgh’s lineup was built mostly for defense and ball protection, a 3-5-1-1 formation that was altered into a 4-4-1-1 later in the first half. Familiar face forward Russell Cicerone made his first return to Cincinnati since his 2018 USL season with FCC.

While FC Cincinnati enjoyed a slight advantage in possession in the first half (53-47), much of it was spent within the Cincinnati half. The Riverhounds opted to play a haggling press that tested Harrison Robledo and Ian Murphy in the middle. Celentano looked solid in net, smothering a shot by Hugh Dixon in the 26th minute and getting big to deny Daniel Griffin an opportunity in the 40th minute.

Cincinnati failed to register a shot on goal in the first half, their best opportunities coming from crosses into the box. Allan Cruz was unable to get his head on a set piece in the 16th minute, and Nick Markanich floated his header high and wide in the 30th.

The second half provided a major shift in Cincinnati’s direction, as the fouls started to mount for Pittsburgh. Cruz and Markanich had the best opportunity in the 50th minute. However, Cruz’s shot hit the woodwork, and Markanich was denied by goalkeeper Jahmali Waite. Waite had a solid game overall, making six saves for a Pittsburgh team that was peppered in the final 75 minutes.

Cincinnati had an even closer shot at victory in the 83rd minute. A scrum in the Pittsburgh box forced Waite off his line, only for defender Arturo Ordonez to parry Markanich’s effort off the line. While Cincinnati had substituted in more first-team talent, they were unable to punch the first goal through.

The tide turned once added extra time started, as Barreal was able to switch to a more natural position. In the 94th minute, the Argentinian received a pass from Luciano Acosta in the box and was wiped out by Waite. Barreal took the awarded penalty kick  himself, smashing a left-footed shot for a 1-0 lead.

The second goal had its own set of controversies. In the 99th minute, Alvas Powell threaded a deep pass upfield, only for a collision to spring the ball free to Barreal, who clipped a shot past Waite’s left. While Pittsburgh was justifiably upset on the field, the goal stood for a 2-0 lead. That margin lasted through the first and second halves of extra time, sending FC Cincinnati to the next round.

The draw for the 4th round of the U.S. Open Cup will take place Friday April 22nd. While FC Cincinnati’s opponent is still unknown, Detroit City FC’s 2-1 “cupset” over Columbus Crew could make a Detroit/Cincy rematch possible.