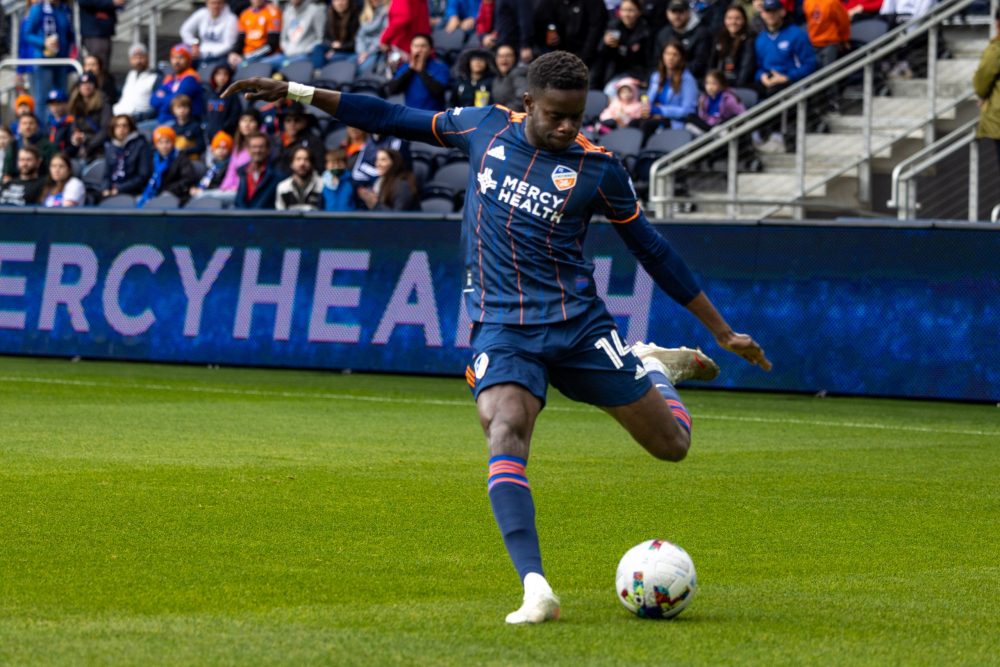 Saturday’s MLS contest in Charlotte between Charlotte FC and FC Cincinnati should serve as a good evaluation tool both for those bullish on the on-field progress made by the visitors and those who remain skeptical.

The Cincinnati side began the season with a dismal 5-0 loss at Austin, then lost a cruel 1-0 decision on a late penalty at home to DC United. Pat Noonan’s side has rebounded in a big way over the past two matches, surprising Orlando City 2-1 on the road and then calling some serious attention to themselves with an assertive performance in a 3-1 home victory over Miami. FCC has shown improvement in goal, in the back line, in midfield and perhaps most dramatically in attack, with Brandon Vazquez spearheading the attack to the tune of four goals scored in two matches.

FCC will travel to the other Queen City in search of three victories in a row, but expansion side Charlotte is coming off its first MLS win last weekend over New England, and the hosts are the betting favorite as of Thursday. The extent to which FCC fans may feel the oddsmakers are overlooking their team’s progress under Noonan is a real indication of the positive feeling building around the group early in the season. A win over Charlotte will be seen as confirmation that something significant (for the better) is brewing in Cincinnati. Taking one on the chin, however, would like provide a lot of pause for fans hoping to get hyped about their team’s longer-term prospects.

For his part, Noonan sees positives but is always looking for improvement, as illustrated in his comments about the team striving to win the ball in key areas and then doing something good with it when they do.

“We’ve talked a lot about how and where we want to win the ball and what to do from that. But I’ve been pleased with our continued progression in winning the balls in dangerous areas, and looking to create chances from those moments,” Noonan said in quotes distributed to the media by the club. “I still think we can be a lot cleaner going forward, when we win balls in dangerous spots. But I’ve been very pleased with the understanding of the group in how and why we want to apply pressure to the opposition and where we go from there. So I think those numbers as far as where we’re dispossessing teams and how we’re transitioning forward have been good thus far.”

For Charlotte, a win after three losses to open the team’s inaugural season prompted head coach Miguel Angel Ramirez to speak of “reducing the gap” between his team those they face. That they beat a New England team coming off a midweek trip to Mexico for Concacaf Champions League play and missing a number of first choice players is worth noting, but a win is still an achievement that cries out for FCC not to allow for any complacency, as if the club’s history over the past three seasons would support such an attitude anyway.

FCC Coach Pat Noonan has preached to his team this week to expect a difficult match.

“They’re coming off a good victory against a good team, and you can see the energy of their group and their coach and how they go after the opposition,” Noonan said. “So it’s certainly going to be a challenging game in a in a tough atmosphere. But I was impressed with their most recent performance and how they’ve continued to improve week to week. So I think our group understands the challenge that’s ahead of us, but we need to be prepared for an opponent that’s going to get pressure to the ball, that’s gonna be aggressive in transition moments. So we need to match that intensity and try to find ways to have quality on both sides of the ball to be able to walk off the field with the right result.”

Charlotte have fielded a fairly consistent starting XI over the opening four matches, but Ramirez has tinkered with the formation every week, going from a 5-4-1 to a 4-5-1 to a 4-1-4-1 and then last week a 4-4-2 in the 3-1 victory.  Polish Designated Player Karol Swiderski was the hero of the team’s first MLS win with a pair of goals, but he is listed as questionable on the league injury report. If he plays, he may be joined in attack by former Maryland standout and MLS SuperDraft first pick Ben Bender.

Former Chicago Fire player Brandt Bronico is a regular in midfield but engine-room colleague Alan Franco will be missing for Charlotte as he has been called up to the Ecuadoran National Team for the weekend’s World Cup qualifiers. Back line regulars include Christian Fuchs and Guzman Corujo, but fellow defender Christian Makoun will be away on international duty with Venezuela. Charlotte native and homegrown signing Jaylin Lindsey is a regular at right back, with Croatian Kristijian Kahlina holding down goalkeeper duties.

Of course, the international break works against the visitors as well. FCC’s biggest lineup question mark entering Saturday is at left wingback, with Ronald Matarrita away on international duty for Costa Rica following his outstanding performance vs. Miami last weekend. Ray Gaddis is struggling with injury and youngsters Zico Bailey and Dane Murphy didn’t overwhelm in their cameos earlier in the season.

That is an example of the kind of hurdle FCC will need to overcome to truly rise to higher tiers of MLS quality, as depth in the lineup will be an important component if FCC is to built on its recent success and genuinely make a run at more lofty experiences in MLS this season.