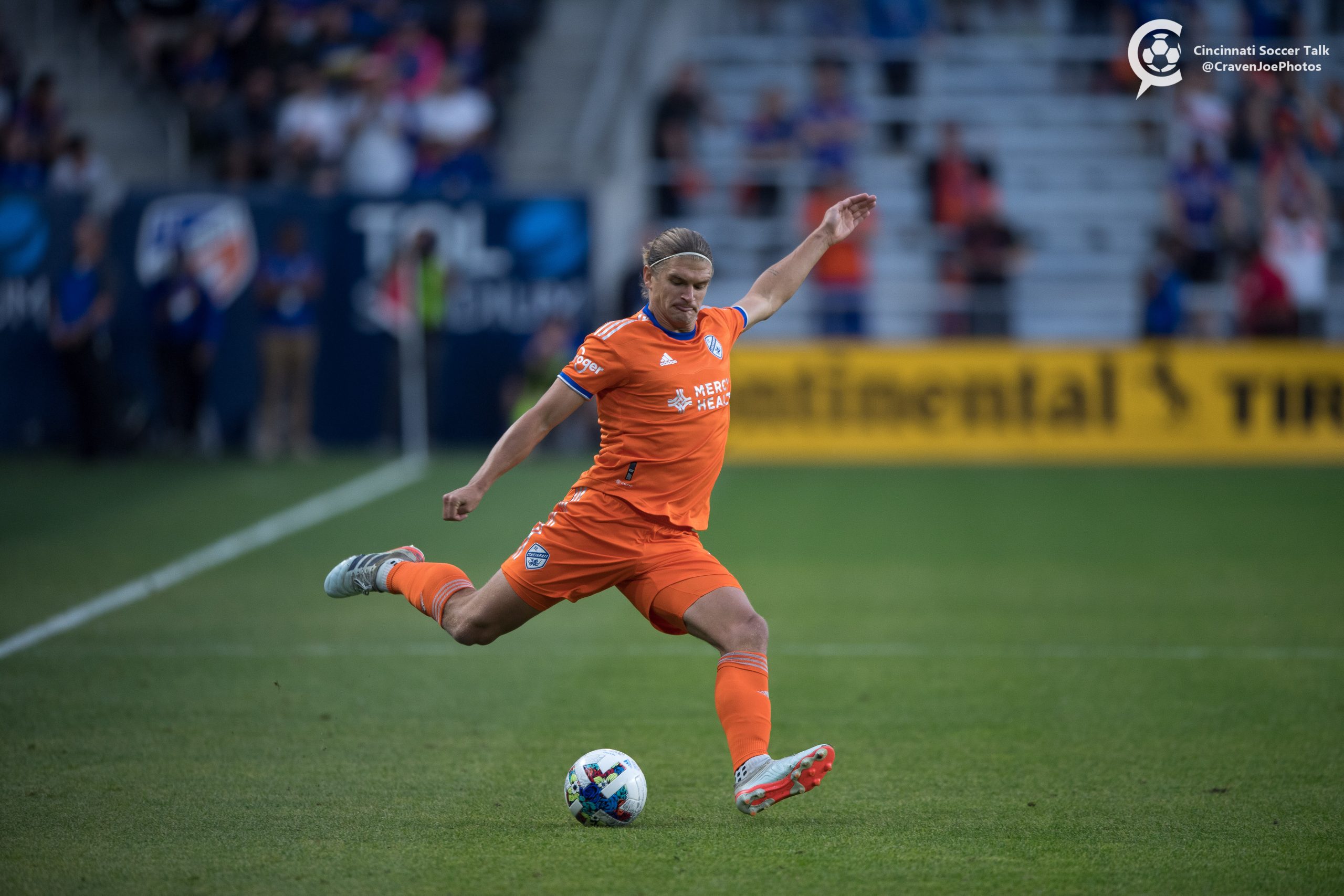 FC Cincinnati (2-0-3, 6 points) escaped the cold of the Queen City for a windy southern swing in Charlotte. The Orange & Blue continued in generating offensive chances in 2022, but managed t0 fall 2-0 to expansion side Charlotte FC (2-0-3, 6 points).

Head coach Pat Noonan swapped Alvaro Barreal for Ronald Matarrita in what was nearly a similar group to the past two wins. A noticeable change was Barreal filling more of a left midfield role with Tyler Blackett moving to a left back on occasion.

Cincinnati was on the front foot over the first five minutes before a counter attack goal from Charlotte. First overall MLS SuperDraft pick Ben Bender was able to get space from defender Nick Hagglund and send a diagonal ball to Karol Swiderski. The Polish striker was left unmarked as both Barreal and Blackett failed to track the run. His right footed shot from the right side of the six yard box found the top left corner past Alec Kann.

Cincinnati struggled to get back in the match until the final fifteen minutes of the half. A flurry of chances begun in the 30th minute when Luciano Acosta slipped a ball into Dominic Badji. The forward crossed to an oncoming Yuya Kubo who wasn’t able to get the ball on frame.

Seconds later, Lucho launched a shot from distance that went just wide-left of the post.

In the 32nd, Brandon Vazquez was denied after a great layoff from Acosta. While it was a great save from the keeper Vazquez but his chance right in the middle of frame instead of wide of the keeper.

In the 40th minute Kann came up big on a shot from Daniel Rios. Bender continued his good form and delivered a great cross to the forward.  Minutes later FCC saw another opportunity as Acosta continued to play following a possible foul on Barreal. His looping curler generated a finger tip save from Kahlina.

Cincinnati’s pressure in the final 15 minutes likely caused Noonan to keep the groups shape going into the second half instead of an earlier change in tactics.

Seconds into the next half, Acosta sent an incredible through ball to Alvas Powell. The right back miss-touched the ball. While he was able to get a decent effort off, Kahlina made a great save. Another wasted chance for FCC, but the group was continuing to get opportunities.

In the 49th minute Powell had another chance. The ball bounced and found the right back who sent a volley at Kahlina. His effort trailed just wide, but was nearly a worldly goal.

Five minutes later Swiderski sent an exceptional free kick past the diving Kann. Kubo was called for a questionable foul just outside the box in a dangerous area. The Polish striker who withdrew from his national team earlier this week sent a left footed shot to the top left corner in what will likely be the goal of the week.

Noonan changed tactics in the 59th minute brining in Brenner and Ray Gaddis for Alvaro Barreal and Powell. FCC would take the shape of a 4-3-3 to mixed success.

Efforts by Dom Badji and Lucho failed to get the Orange & Blue on the scoreboard later in the half. Cincinnati looked out-of-step for most of the evening with their finishing.

Kann had a highlight real double-save in the 76th. The new keeper has been a substantial improvement between the sticks denying a point blank effort followed by a shot by Bender from distance. A shot from Kubo and a missed cross by sub Nick Markanich were not pulled off and FCC failed to with their third match in a row.

FC Cincinnati now sits in 9th place just behind Charlotte on goal differential. This is a work in progress that has seen moments of promise, but will need to be improved upon for the club to make the playoffs.

The Orange and Blue come home next week and will face the struggling CF Montréal.