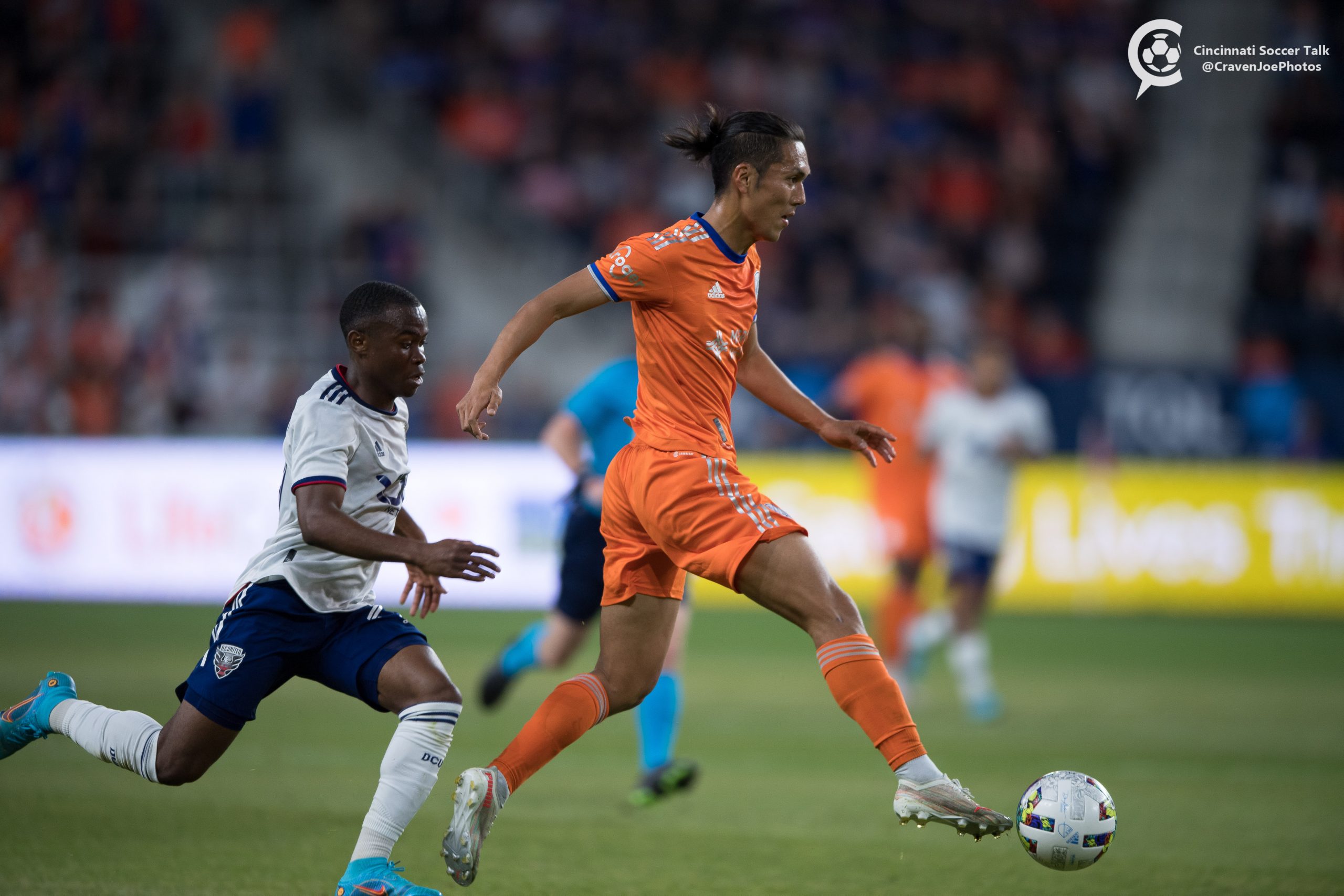 FC Cincinnati dropped its 2022 home opener to DC United in an all too familiar way: a heartbreaking goal just before the final whistle. However, despite another loss, there’s reason for optimism. The foundations of Pat Noonan’s preferred style of play in the not-as-bad-as-it-looked loss to Austin last week were evident again. FCC’s emphasis on aggressive pressing and quick transitions into attack continued against DC and led to the Orange and Blue controlling much of the game.

I noted last week that FCC struggled to take advantage of touches in the attacking third by not getting the ball into the penalty box. Against DC, FCC improved, generating more final third possession and more touches in the attacking penalty area. Per Football Reference, the Orange and Blue’s attacking play generated 1.7 xG on 16 shots. Add in a Brandon Vazquez goal chalked off for a tight (but ultimately correct) offside call and we can heartened that the FCC’s attacking system is creating scoring opportunities. All that’s left now is turning chances to goals, which will happen.

In week one, defensive miscues gifted Austin multiple, high-quality scoring opportunities. Outside of two shots in the fifth minute, the second saved off the line by Tyler Blackett, and a counter attack in the 18th minute ending with a miss from Edison Flores, FCC’s defense looked much improved. In the run of play, the Orange and Blue limited DC to nine shots worth 0.8 xG. Ola Kamara’s 98th-minute penalty gifted DC the three points on the night as well as making the box score look closer than the reality of the on-field play.

Sometimes the ball doesn’t bounce your way. On Saturday, FCC played one of its better matches in its entire MLS tenure from a creating chances/limiting opponents’ chances perspective. Even though DC left TQL Stadium with all the points, I’m encouraged that the Orange and Blue could rightfully expect to win that match more often than not. After all, that’s a position this team hasn’t been in very much during since 2019.

With left back Ronald Matarrita out due to an injury, Noonan opted to adjust his formation, replacing Allan Cruz in midfield with a third center back, Nick Hagglund. Despite the personnel change, FCC played in largely the same style as last week against Austin. DC was less interested in patiently building out of the back so FCC applied less pressure in its attacking third. However, the Orange and Blue’s pressure was effective, with FCC winning possession back after 35% of its pressures.

Noonan asks center backs to take on a larger role in distribution. Of the 39 passes FCC completed into the final third of the field against DC, the three center backs were responsible for 18. Gone is the slow, methodical approach to build up play from last season where the back line would swing the ball horizontally. This year, FCC’s center backs are pushing the ball up the field. Tyler Blackett, especially, has been trusted to hit direct balls forward. MLS Soccer’s chalkboard shows most of those direct passes traveling up the left side, looking to take advantage of the aerial advantage either Brandon Vazquez or Dom Badji had against DC’s 5’7” right center back Andy Najar. 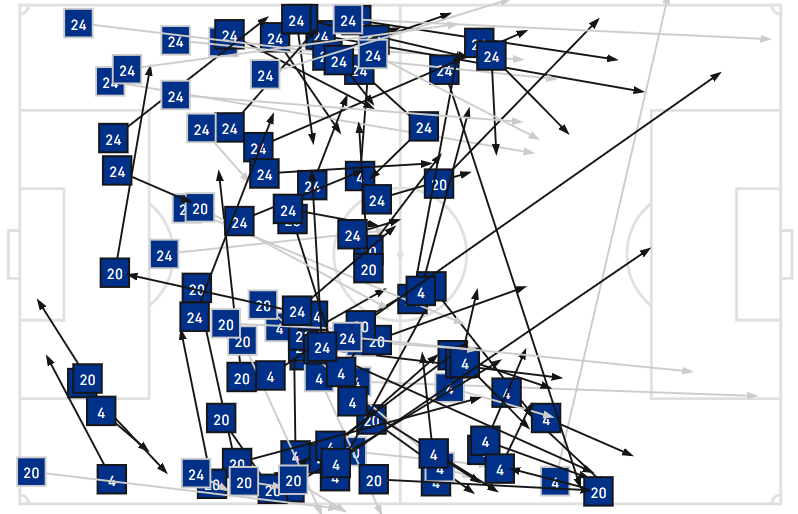 Obviously not all of these passes are completed. However, now, FCC is set up to attack second balls or put opponents under immediate pressure higher up the field. However, asking center backs to push the ball forward has freed up Lucho Acosta and Yuya Kubo to be the ones on the ball in the final third.

The Orange and Blue’s ability to play in a similar style regardless of with two or three center backs speaks to the coaching staff effectively communicating roles and responsibilities to the players as well as the players’ ability to execute. Injuries and suspensions are going to happen, not even mentioning the long MLS season with lots of travel played throughout the summer. Being able to play within a larger tactical framework (pressing, trying to attack into space) but being able to do it out of multiple formations should serve FCC well as the season progresses.

Kubo Settling In Higher Up The Field

Yuya Kubo deserves mention for his first two performances in midfield in 2022. Kubo played as a shuttling 8 on the right side of a diamond against Austin and then in a double pivot with Junior Moreno against DC and looked good in both matches. Against DC, Kubo was a major force defensively, leading the team in pressures and tackles. His defensive performance is clear from the MLS Soccer chalkboard showing tackles won, interception, and recoveries. Kubo won the ball high up the field in the press as well as deeper in FCC’s half, shutting down DC attacks before they led to shots. 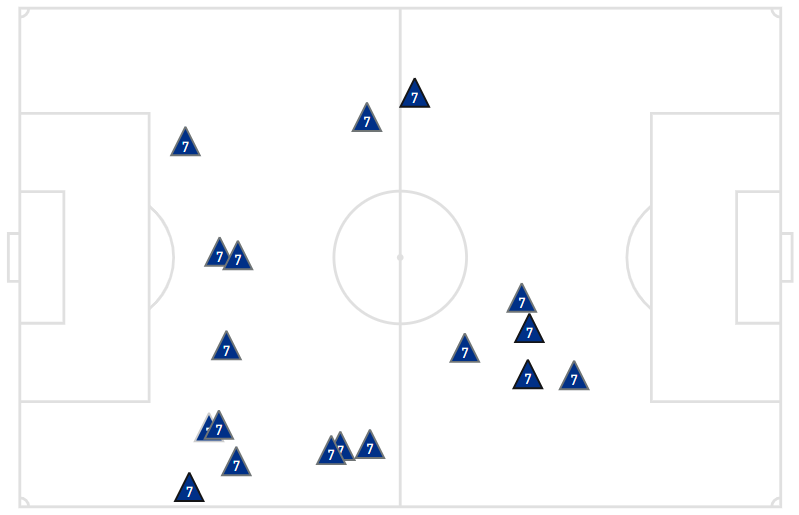 Kubo’s role in possession has taken on a different look early this season as well. As I mentioned above, with the center backs taking on more progressive ball distribution, Kubo has been free to move higher up the field in possession. Against DC, Kubo spent a promising amount of time in “Zone 14,” though his final passes into the box were just a little bit off. 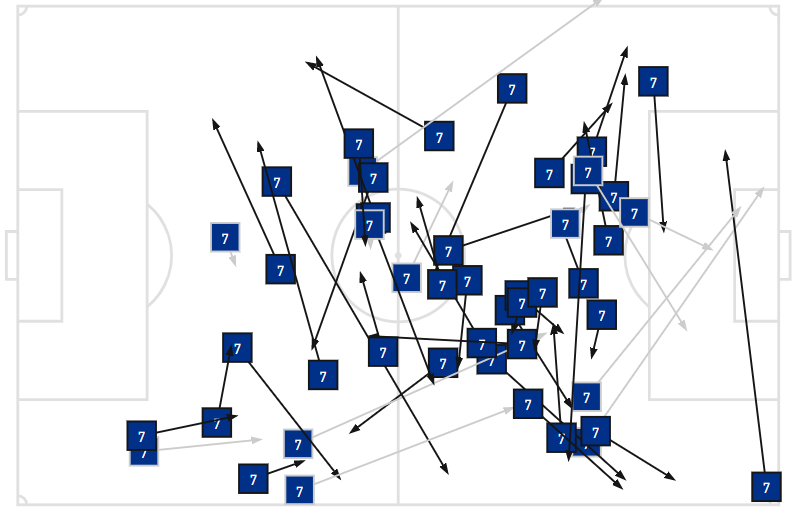 Kubo also moved the ball into attacking areas from deep but most often with the ball at his feet, leading the Orange and Blue with seven carries into the final third. In total, Kubo’s 25 touches in the attacking third trailed only Acosta’s 47 on the night. Kubo has shown an excellent defensive work rate but utilizing his technical ability higher up the field should pay dividends for FCC. After all, he was signed as an attacking player, and given the opportunity, he should be able to add a valuable attacking element to Noonan’s gameplan.