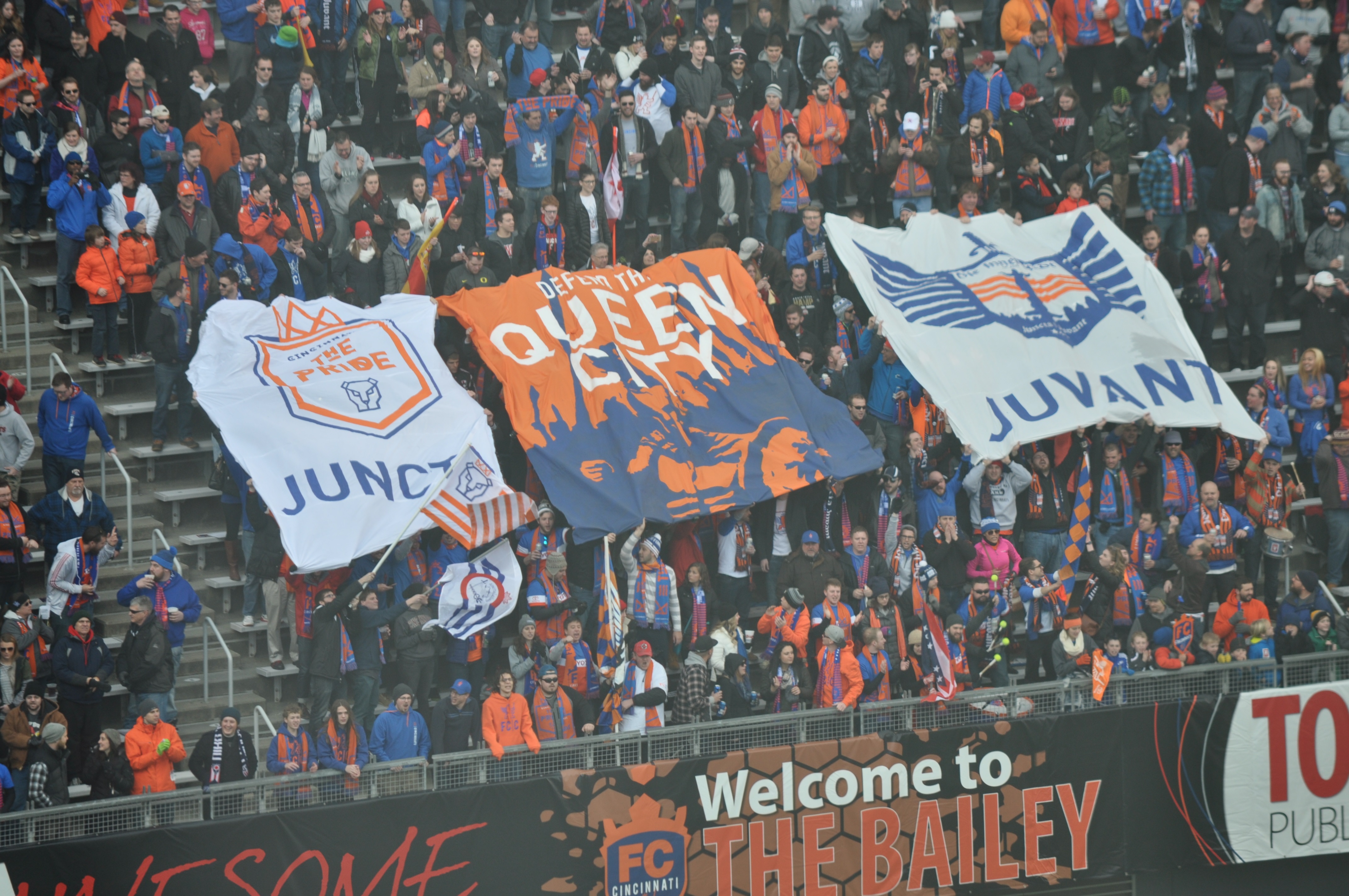 This is the third piece in a series from @GracinFCC. The series of articles will involve games that were considered “FC Cincinnati Classic Matches”. While the club is entering it’s 7th season, there have still been many exciting moments, with many more to come. Enjoy the walk through memory lane, and take in some of the greatest moments that will forever be etched in Orange and Blue.

In 2016, FC Cincinnati was preparing for their first season. With John Harkes as head coach, a squad was assembled around his vision, and the Orange and Blue was ready to put the city on the map. Fans were expected to arrive at Nippert Stadium for the first time, and history was being made.

In the first two games of the season, the club was 1-0-1. Their first game ever resulted in a 1-0 loss to Charleston Battery, but they recovered when they traveled to Pennsylvania, beating Bethlehem Steel 2-1. Ahead of this match, anything could happen.

The preparation was high for fans. FCC assembled their supporters section, and called it the “Bailey,” naming it after the sturdy wall in a castle that keeps the invaders out. This section would be the focal point in this historic match.

In the latest of the classic match series at Cincy Soccer Talk, today we are covering the first ever home game the club played. Previously, we covered the first MLS home game against Portland, and the magical Open Cup match against Chicago. Stay tuned for more of these as we prepare for the new season.

Ahead of the match, the supporter groups were preparing for their first march of many. The fans marched towards the Nippert Stadium campus, and into their section, chanting loudly as they awaited the game.

Kick-off was played, and soccer had arrived again in Cincinnati. Very rapidly, the club was on the front foot. As they kept looking to attack, things would pay off.

Just 4 minutes into the match, a ball was played up and headed down by Jack Metcalf, Corben Bone intercepted the ball by controlling it down with his chest, and playing it over to Sean Okoli. Okoli played the ball up, and shot the ball in the back of the net, to complete a spectacular scissor kick goal for the first at Nippert Stadium.

Right after the opening goal, the intensity was still piled on from FCC. Just outside of the 18, Jimmy McLaughlin intercepted the ball, and took a shot but it was deflected. The attack still wasn’t over, as the ball went out to Okoli, and ended up on the foot of Andrew Wiedeman, who couldn’t carve out a chance either.

In the 11th minute, it was a corner chance for Charlotte. Jorge Herrera lined it up into the box, and it was headed on. The ball bounced around, before being headed straight into the hands of Mitch Hildebrandt.

The attacks continued on both sides, and this time the recipient was the Orange and Blue. Sean Okoli headed the ball down and was brought down in the box, and a follow up shot from Jimmy McLaughlin was saved by Cody Mizell.

Throughout the rest of the half, both sides had chances, and Mitch Hildebrandt was making saves off of Charlotte’s shots. In the 38th minute, a corner was swung into the box, and Harrison Delbridge got a head on it, before being tripped down. Both sides weren’t happy with each other, and got into a fight near the goal.

Half-time was called, and FC Cincinnati were in the lead going into the second half, thanks to Sean Okoli’s scissor kick. Both sides had good chances, but weren’t able to convert them. The job for the Orange and Blue was to close the match out with a win. Could they?

Just five minutes into the start of the second half, FC Cincinnati was operating quickly. Austin Berry intercepted the ball, and passed it out to Jimmy McLaughlin on the left side. McLaughlin cut inside, and crossed it into the head of Berry.

The Cincinnati native was on the scoresheet in the first home match, doubling the lead.

Things wouldn’t stop there, as Charlotte were attacking quickly after the second deficit. A corner was served in again by Herrera, and the ball was cleared away. Herrera came back with a second cross, and after it bounced off the head of Patrick Slogic, David Estrada put the ball in the back of the net.

The club would have to work to protect this lead, now that it was cut in half. John Harkes’ team would keep attacking.

Just two minutes after Charlotte’s goal, the club was quickly attacking up the side. Sean Okoli left it off for Bone, who left it for Wiedeman, but his shot sailed over the bar.

Another free-kick chance in the match, and this time it was Charlotte standing over it. Enzo Martinez served the ball in, and a player headed it towards goal, but Mitch Hildebrandt grasped onto the ball, making the save.

In the 60th minute, Estrada worked up the left side, and crossed a ball into the middle of the box. Caleb Calvert got a foot to it, but Mitch Hildebrandt dived to his left to make the save.

FC Cincinnati now were looking to score. Jimmy McLaughlin moved up the center of the pitch, and the Pennsylvania Messi sent the ball to Corben Bone on the left side, but his cross went wide of the goal. A good job protecting the lead on defense, but the club comes just short of increasing the lead and securing the match.

In the 78th minute, Corben Bone served a free-kick in, but Harrison Delbridge was brought down in the box before he could get his head on it. Controversy rang around Nippert, as the referees ignored another chance that could’ve been a penalty.

The rest of the match, the club defended well, and would end the match protecting the lead for 2-1.

In the first ever home match, the fans delivered, and the crowd was announced to be 14,658, the largest fan attendance in USL since the year before. Even with the temperature at 39 degrees, history was written, and the first of many triumphant games in Cincinnati was played.