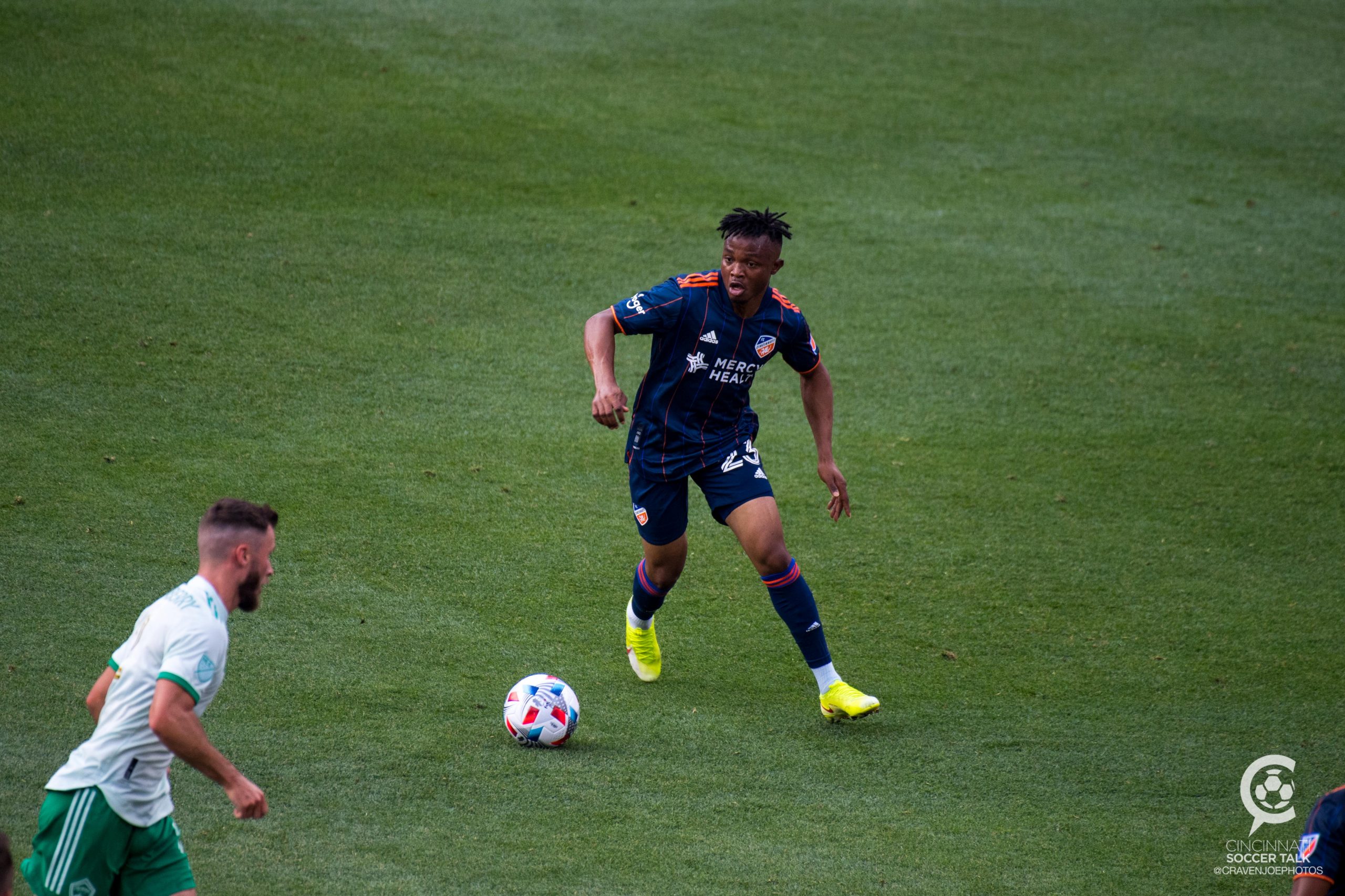 Two road wins against Chicago Fire FC and Toronto FC show some progress that fans have been waiting for. The underlying numbers back up FC Cincinnati’s wins on the field as well. FCC deserved to win both games, largely creating the best chances in each match while stymieing its opposition defensively.

In both matches, FC Cincinnati benefited from scoring first, forcing its opposition to try to break it down defensively. That strategy nearly backfired on multiple occasions across both games, but largely, FCC was able to deny its opposition great scoring chances.

Controlling The Match And Scoring First

Against Chicago, FCC created early pressure, racking up 10 shots, including seven on target, in the first 20 minutes. Despite going into half-time tied 0-0, FC Cincinnati’s 1.35 expected goals compared to the Fire’s 0.22 demonstrated the Orange and Blue’s dominance.

Though FCC conceded 19 shots over the course of the match, just two were on target. Also importantly, it had an average xG value of 0.08, indicating that FCC’s defense limited access to the more dangerous parts of the field. It’s also worth noting that through the first 50 minutes, when the score was tied, the Fire’s shots averaged just 0.03 xG. When the game was up for grabs, FCC created the better opportunities and limited Chicago to virtually nothing.

Álvaro Barreal’s excellent free-kick goal in the 50th minute changed the match. Like what happened to FCC in its 2-0 loss to Colorado, FCC could sit back and attempt to absorb pressure from Chicago, who had to chase a goal. FC Cincinnati rode its luck a bit, especially with a miss by Francisco Calvo, but, as noted above, over the course of the match, FCC still pushed the Fire into taking low-value shots.

As Chicago pressed for an equalizer, coach Jaap Stam’s substitutions made an impact. The introductions of Jürgen Locadia and Brandon Vazquez in the 73rd minute provided an opportunity to play more direct on the counter-attack. This approach generated two very high-quality scoring opportunities, though neither was converted.

The full advantage of an early goal was evident in FC Cincinnati’s 1-0 win on Saturday night. Allan Cruz’s fourth-minute opening goal allowed FC Cincinnati to sit deeper and force a Toronto FC team missing three of its most dangerous attacking players to break them down.

With the exception of one good chance from Marko Delgado in the 18th minute, Toronto manufactured almost nothing else, finishing the match with three total shots with Delgado’s effort as the only one on target.

Toronto’s starting strikers, Dom Dwyer and Patrick Mullins, struggled to find the game, successfully receiving just over half of the passes played their way, according to Football Reference. Unable to break down FCC’s defensive block, Toronto looked wide, sending in 12 crosses during the match, completing zero. FC Cincinnati players made 23 clearances, including 14 by the four players who played center back in the match. The early goal came after pressure high up the field from FC Cincinnati, but after going 1-0, FCC was happy to sit deeper, pressuring Toronto in FCC’s defensive third. Michael Bradley had the most touches and passes attempted for Toronto, but he was also pressured a team-high 16 times when passing by FCC players.

With the end of Locadia’s loan and his return to Brighton and Hove Albion, Isaac Atanga’s name should be written in pen as the starting left-winger. His speed and willingness to run at defenders at pace give FC Cincinnati another dangerous option on the wing. Stam’s continued preference for inverted wingers fits the play styles of Atanga and Barreal on the right wing. Combined with Brenner’s willingness to drop deep to receive the ball, Atanga and Barreal should be in positions to challenge opposing teams’ center backs with the ball at their feet.

Atanga’s perfectly timed land-weighted pass to Cruz for the opening goal against Toronto shows another facet of his game. As Atanga continues to develop chemistry with Luciano Acosta, Brenner, and Barreal, expect him to create and receive more goal-scoring opportunities.

Despite creating better scoring chances in the last two matches, FC Cincinnati is still struggling to possess the ball in dangerous areas of the field consistently. Because of Allan Cruz’s early goal against Toronto and FCC’s willingness to soak up pressure thereafter, the more illustrative example comes from the Chicago win.

Against the Fire, FC Cincinnati successfully moved the ball into the final third of the field just 18 times during the match, just once more than it did against Nashville and Toronto. Part of the explanation comes down to struggles with ball progression out of midfield. As I noted last week, Acosta was a one-man engine moving the ball up the field against the Colorado Rapids. However, to do that, Acosta dropped deeper to pick the ball up, with 58% of his touches coming in the middle third of the field. 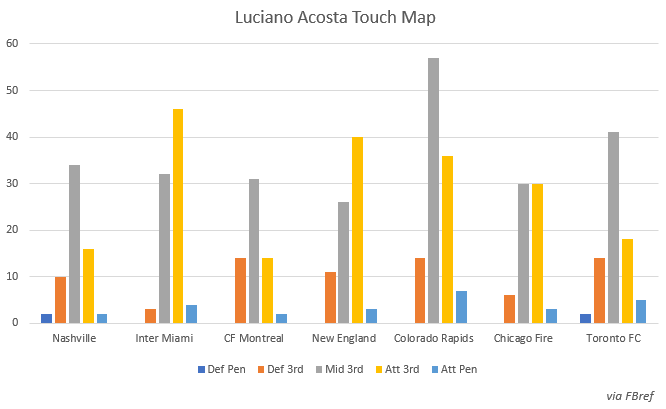 Against Chicago, when FCC pushed for the lead for more than half the game, Acosta found the ball in the final third more often, with nearly half his total touches coming in the final third. However, without another reliable ball progression option behind him, Acosta was on the ball less than against Colorado. 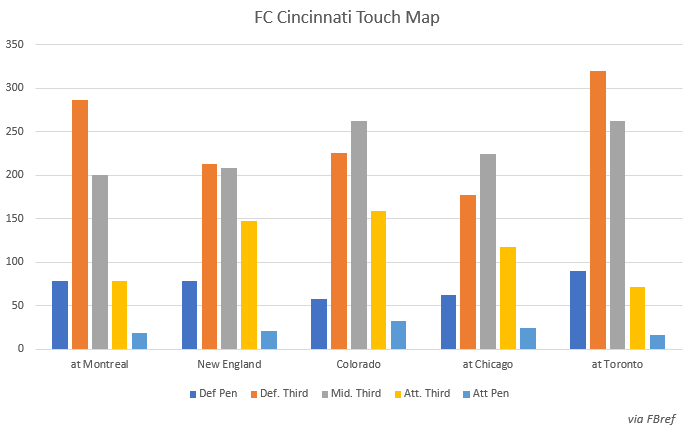 For FC Cincinnati’s attack to hit on all cylinders, Stam must identify another plan to move the ball from defense and midfield into the final third. The departure of Rónald Matarrita on international duty for the Gold Cup makes this question more difficult to solve. Whether it’s asking Yuya Kubo to take on more of a forward-passing role or some other option, FC Cincinnati needs to find a reliable way to get the ball into the final third.