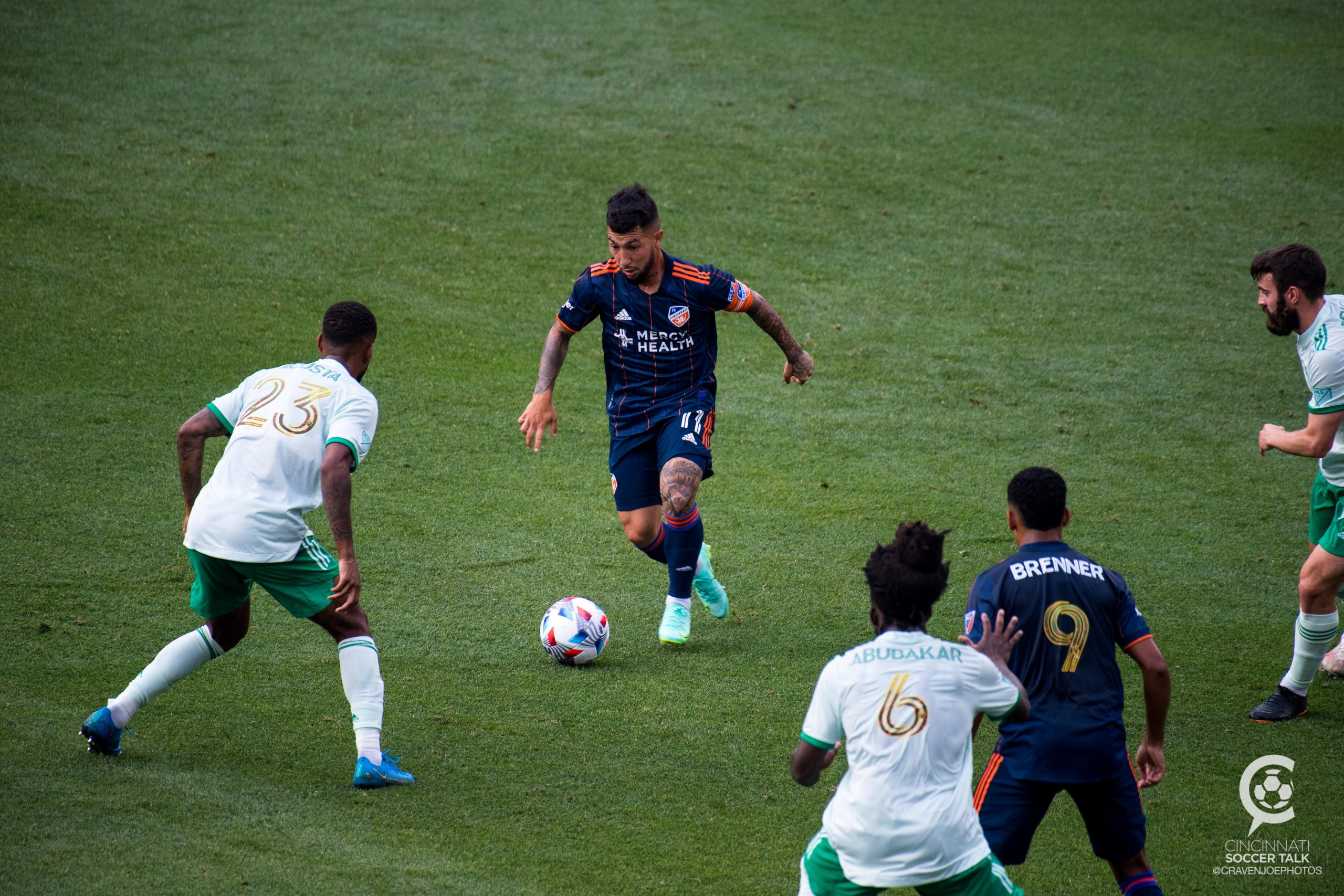 Nate Gilman digs into the flow of FC Cincinnati’s 2-0 home loss to Colorado on Saturday, examining the quality of the club’s shot total and Luciano Acosta’s ball progression.

In the wake of a 2-0 loss to the Colorado Rapids on Saturday, coach Jaap Stam promised to stay the course, which, if you just glanced at the box score of Saturday’s match, would seem like the right choice. Just looking at the stats without any added context, FCC’s 2-0 loss to the Colorado Rapids might seem like an unlucky result. FCC outshot Colorado 22-7, won the possession battle, completed more passes and finished the match with 2.07 expected goals to Colorado’s 0.45 xG, per MLS Soccer.

However, for the first full capacity crowd at TQL Stadium, the box score’s assessment doesn’t square with the events of the match. It’s worth digging in a little deeper to the flow of the game to illustrate why those overarching stats provide a misleading picture of what actually happened.

Before Colorado scored in the 21st minute, FCC had created slightly better goal-scoring opportunities, 0.15 xG on three shots, but the Rapids finished their only chance, going up 1-0. Down a goal for the bulk of the match, FCC took 11 shots but generated just 0.68 xG between the 22nd and 72nd minutes. When FCC was chasing a still-close game, it struggled to break down a Colorado defense protecting a lead. FCC’s shot chart following Colorado’s first goal shows those struggles.

Per Football Reference, between the 22nd and 71st minutes, FCC’s shots were taken from an average of more than 18 yards from Colorado’s goal. FCC created just two opportunities between the two Colorado goals worth at least 0.10 xG. So far in 2021, the average expected goal value of a non-penalty shot in MLS is 0.10. So, despite being dominant in possession and taking 11 shots, FC Cincinnati created just two chances of average or better quality.

Jonathan Lewis ended the match for all intents and purposes when he capitalized on a rare Colorado chance in the 72nd minute to make in 2-0. You could argue FCC was unlucky to be down two at that point, but, as noted above, FCC hadn’t created much in the way of above average, let alone clear-cut, goal-scoring opportunities. Jürgen Locadia’s blocked shot in the 94th minute provided more than 40% of FC Cincinnati’s total expected goals for the match, making the match appear much closer in the advanced box score than in reality.

Ultimately, Colorado finished an early opportunity and then was able to sit back and stymie FC Cincinnati’s attack, forcing the Orange and Blue into lots of low-percentage shots. They challenged FC Cincinnati to break their defense down, and FCC didn’t succeed.

CST’s own Ken Hoetker took a look at how FCC has performed in various game states during the 2021 season and, not surprisingly, the results are not pretty. During the 2021 season so far when the score is tied, FC Cincinnati’s opponents created 3.71 xG/90 minutes compared to 1.05 xG/90 for FCC. Granted, FC Cincinnati has been tied with opponents for just 200 minutes this season, but the gulf in goal-scoring creation is very worrying moving forward.

Acosta finding his feet, but he needs help

Against Colorado, Luciano Acosta moved the ball up the field nearly by himself. Acosta was the main engine pushing FC Cincinnati forward, both dribbling and through his passing. However, because Acosta is such a major part of FCC’s ball progression into the final third, he can’t fully succeed in the role FCC needs from him, putting himself and teammates in positions to score goals.

Acosta led the team in entries into the final third of the field, either by dribbling or passing. He also led the team in passes and dribbles into Colorado’s penalty box. Finally, Acosta led the team in progressive passes received. Acosta was directly involved in nearly half of FC Cincinnati’s actions which moved the ball towards Colorado’s goal by at least 5 yards. For context, FC Cincinnati’s starting front three, Isaac Atanga, Álvaro Barreal and Brenner, combined for 13 fewer progressive actions against Colorado.

Acosta showed what he can do with the ball at his feet. Whoever plays in the attacking trio of the 4-3-3 has to be more involved, both as outlets for passes from Acosta and Acosta’s midfield partners. FCC’s defenders also need to take on more ball progression duties so Acosta can get on the ball in dangerous areas.