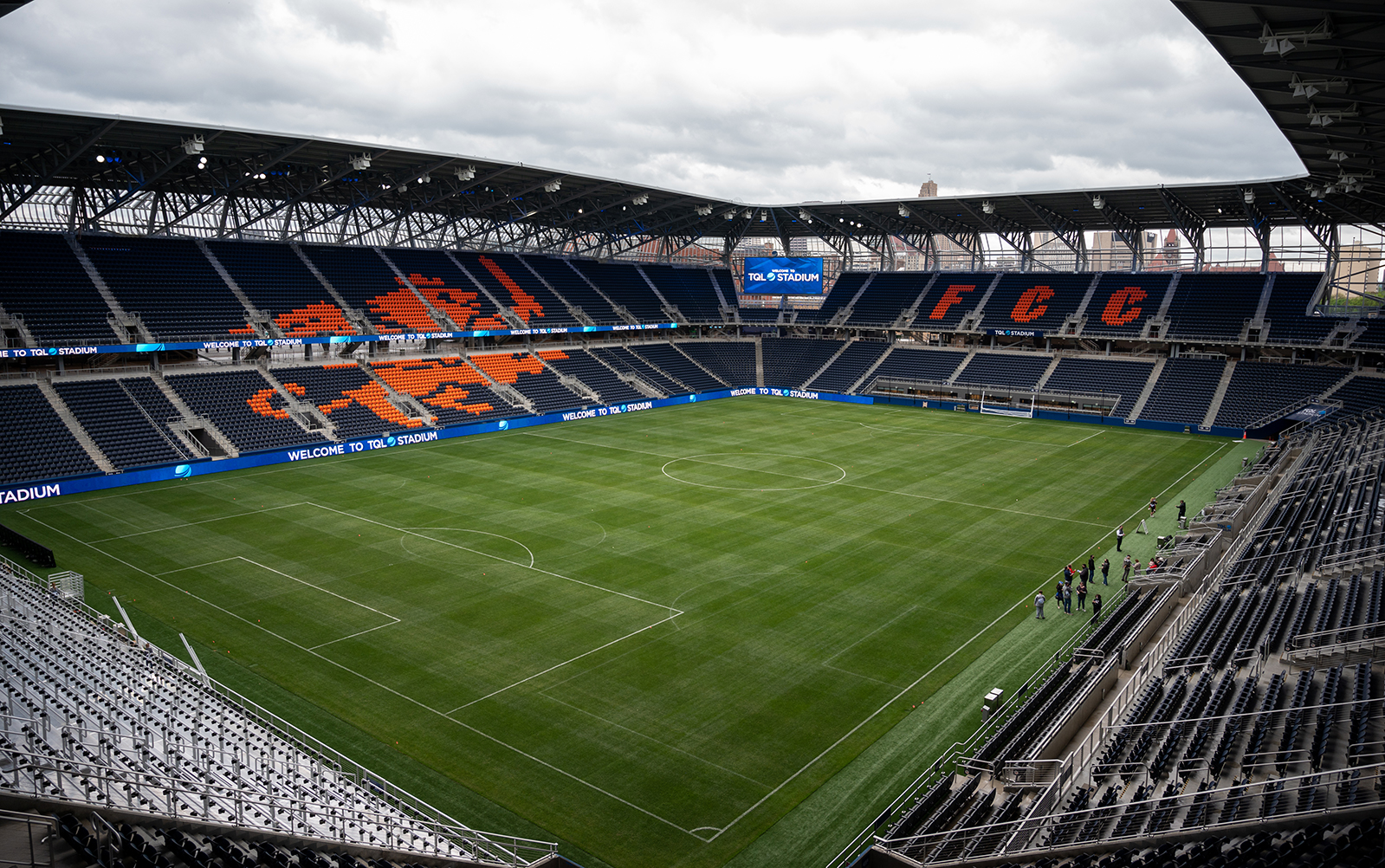 The Orange and Blue begin play at TQL Stadium on Sunday against Inter Miami CF in front of a limited capacity crowd.
It’s the first time fans have been able to attend a home game since the 2019 season.

The fanbase is ready. The national spotlight is waiting. All that remains unanswered is whether the club can live up to its moment.

FC Cincinnati (0-1-2, 14th place, one point) breaks in its new home at TQL Stadium in the West End on Sunday, with a 4 p.m. start time on Fox against Inter Miami CF (1-2-2, 11th place, five points). It’s a moment the club has waited for since its admission into MLS, though celebrations will be muted, with stadium capacity limited through COVID-19 pandemic protocols.

The club will delay inaugural celebrations until it can reach full capacity, FC Cincinnati president Jeff Berding said on Monday’s Cincinnati Soccer Talk podcast. On Wednesday, Ohio Gov. Mike DeWine announced COVID-19 health orders would be lifted effective June 2, so the club could jump back to full capacity anytime thereafter, but there’s been no announcement yet for the June 19 match against the Colorado Rapids.

Supporters, however, are welcoming the chance to break in the new venue and be together again for the first time in nearly 20 months. Because of COVID-19, FC Cincinnati fans have not seen a home game in person since Sept. 29, 2019. There will be a march to the match, complete with a new route and new homes for the supporters’ groups. See our matchday guide for more information.

While coach Jaap Stam told reporters on Wednesday that his players haven’t talked about the new stadium, he said playing in front of a crowd — even a limited one — will make a difference after spending almost all of 2020 in empty stadiums.

“It can be a huge difference,” Stam said. “Even only 6,000 (fans) gives you a totally different atmosphere than without. It gives you a very positive feeling when the fans are pushing you forward. It’s an extra push for the players.”

Fans will be hoping that extra push can help the club live up to its big moment, something it always seems to do when the national spotlight shines on Cincinnati. The 2017 U.S. Open Cup run and inaugural MLS home match in 2019 come to mind.

This moment won’t come without its challenges. Out of the gate, FC Cincinnati quickly stumbled to the bottom of the Eastern Conference table — where it has resided for most of its MLS existence — in just three matches. After taking a 2-0 lead in Nashville to start the 2021 season on April 18, the club has conceded 10 unanswered goals in the last 258 minutes.

FC Cincinnati could be catching Miami at the right time. Since beating Philadelphia on the road, Phil Neville’s squad has drawn with Nashville SC and Atlanta United and just on Wednesday lost 2-0 at home to CF Montreal.

Miami will be looking to feed Gonzalo Higuain at the top of its 4-2-3-1 formation. Higuain has two goals but hasn’t always made the most of his chances. Attacking midfielder Rodolfo Pizarro can also be a threat. Midfielder Blaise Matuidi and defender Leandro Gonzalez Pirez anchor the defense, and fans will likely see a familiar face in Victor Ulloa, who has spent time in the midfield and at right back for Miami.

Can the offense end its scoring drought? FC Cincinnati scored two quick goals in Nashville to start the season, led by key additions Luciano Acosta and Brenner. Though the Orange and Blue have shown dangerous moments in the two games following, nothing has come of it. Acosta has been sidelined with an arm injury. He has been training this week, Stam said, but the club is still assessing whether he can play on Sunday.

What will the pieces at the back look like? With some new signings, there’s the potential for a personnel shake-up on the back line and in the net. Stam said new goalkeeper Kenneth Vermeer is expected to push Przemyslaw Tyton for the starting spot. Considering the 10 unanswered goals, will Vermeer be minding FC Cincinnati’s net on Sunday? Or will Stam give Tyton one more match before reevaluating? There could also be a new centerback pairing. Nick Hagglund and Tom Pettersson have started the first three games, but Gustavo Vallecilla is available, and the club just added Geoff Cameron on Thursday. Can Cameron, who would appear fit after subbing on for Queens Park Rangers in the EFL Championship on Saturday, slot in right away for Stam?

Can FC Cincinnati rise to the moment? Fans, though unsatisfied with the results of the first three matches, are excited for the TQL opener. Though there likely won’t be any official celebration, beginning play in a new stadium is a big deal. This will be a match many fans will remember for a long time. Just the novelty of opening TQL will draw casual eyes of potential soccer fans around the city to televisions. And setting aside the new stadium, three points in this match could go a long way toward turning around this early season.