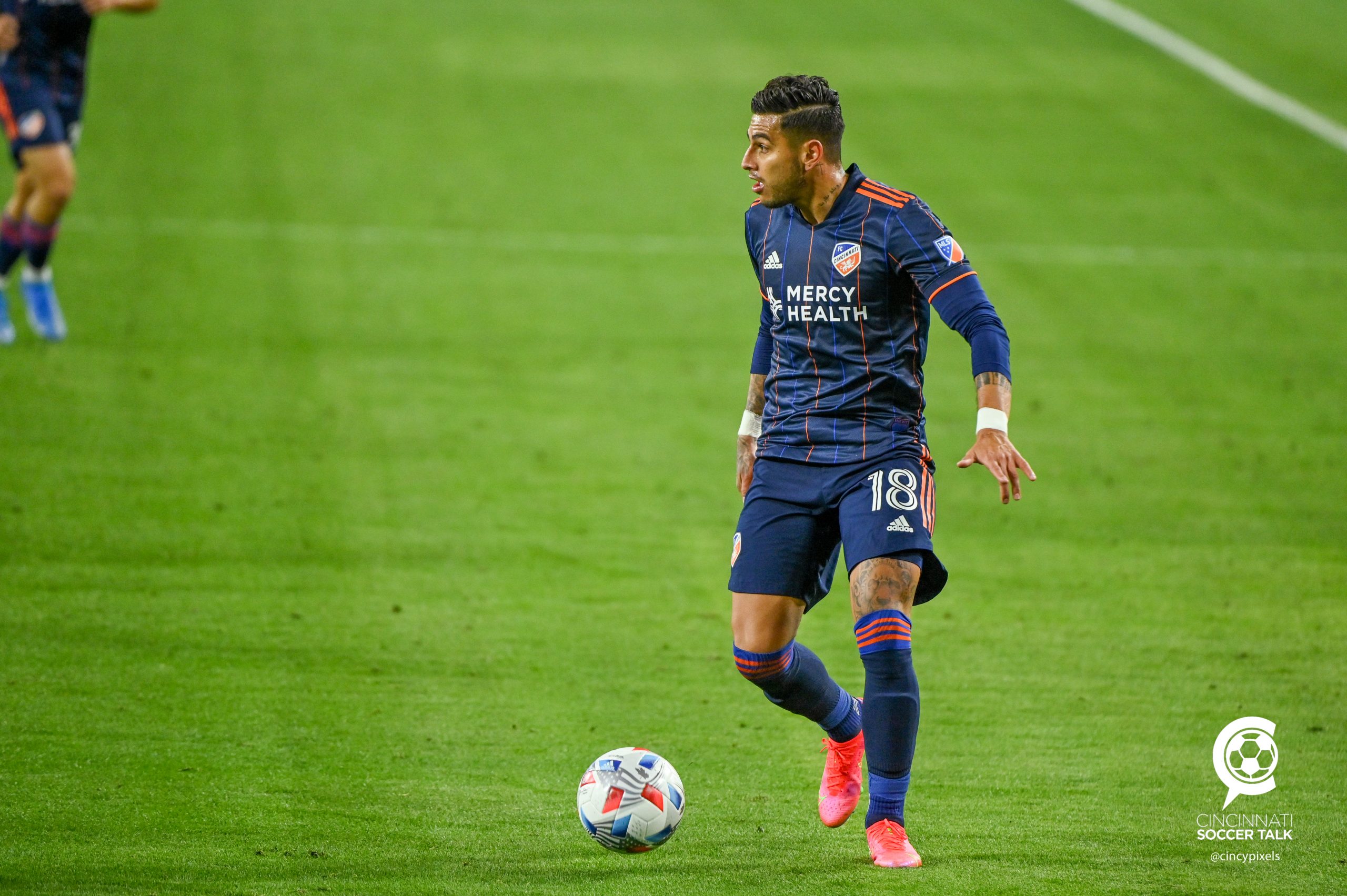 Left back Ronald Matarrita has been giving FC Cincinnati some pointers on what to expect on the Yankee Stadium field when the club travels to meet New York City FC on Saturday.

FC Cincinnati defender Ronald Matarrita spent five seasons with New York City FC. He knows coach Ronald Deila’s tendencies, NYCFC’s style of play and the nuances of the Yankee Stadium pitch as well as anyone. Which is why the Costa Rican is a valuable source of intel this week for FCC players and coach Jaap Stam.

“Ronald always gives us good information,” Stam said, via videoconference on Thursday. “He can give you a little more insight. That’s very helpful for us. We know for ourselves how they can play. Their philosophy is known throughout the world with their partnership with (Manchester) City. They want to press high up the pitch as well. They want to push the ball forward.”

It’s certainly not as if FCC is lacking a scouting report on NYCFC, having faced it four times the past two seasons and losing all four. But this is an injury-depleted New York squad that will be without several key performers. FCC is relatively healthy and riding a confidence boost following a nervy 2-2 draw at Nashville SC last weekend, with goals from Brenner and Lucho Acosta.

Matarrita contributed an assist on one of FCC’s goals in the Music City as Stam’s squad hung for dear life amid 35 shots on goal and an 11-save performance from Przemyslaw Tyton, which earned the Polish keeper a spot on the MLS team of the week. The Orange and Blue can ill-afford to allow NYCFC to dominate in similar fashion on Saturday.

“The game against Nashville was very good to show us what we need to improve on,” Matarrita said. “Now it’s up to us to fix our mistakes, to go out there and execute. They picked up the pace when they got behind. We need to play with the same intensity the whole 90 minutes.”

Deila’s team might be feeling the same way after they squandered an early goal and lost 2-1 at D.C. United. Valentin Castellanos put NYCFC ahead in the 15th minute of action. But Brendan Hines-Ike equalized, and Russell Canouse scored the game-winner, volleying a shot following a corner kick.

Stam sees some similarities in the styles of Nashville and NYCFC.

“Nashville is very similar in how they go forward,” he said. “Nashville is a very physical side as well. A lot of crosses in the box. It doesn’t matter if they have 35 shots or 100 shots, if they don’t go in. We defended that well. We need to defend a little bit more. The atmosphere and intensity in the group is good. Confidence in the group is high. The guys are up for another battle.”

There are no fresh injury concerns for FC Cincinnati. Stam said Alvaro Barreal and Yuya Kubo recovered from knocks in Saturday’s game and have been training with no issues. The same is true for Jurgen Locadia, who was a late sub coming off a thigh issue. The Dutch striker-turned-winger is in full training but still building toward a full 90 minutes.

Then there’s the challenge of playing in cavernous Yankee Stadium. It’s the smallest pitch in MLS with the league’s most bizarre sightlines and a treacherous pitch. Matarrita has been giving tips this week to FCC teammates who are playing there for the first time. He’s seen every odd bounce and experienced every piece of uneven turf.

“I’m very familiar with playing in Yankee Stadium,” Matarrita said. “It is like home for me. But I did have conversations with my teammates about where to be careful, and how the ball bounces in certain areas.”

Matarrita said returning to the Big Apple, where he made more than 100 appearances, will be an emotional experience for him. It was his first MLS club. He is close with the manager and still has close friends on the team. But when Saturday’s match kicks off, he said his focus will be getting a result for the Orange and Blue.

“New York City brings back a lot of great emotion, and it will be special to play against them,” Matarrita said. “I still have a lot of love for the club and the fans of the club. They are the team that brought me to MLS. I will be playing with the FC Cincinnati badge and representing that badge and hopefully getting a positive result.”