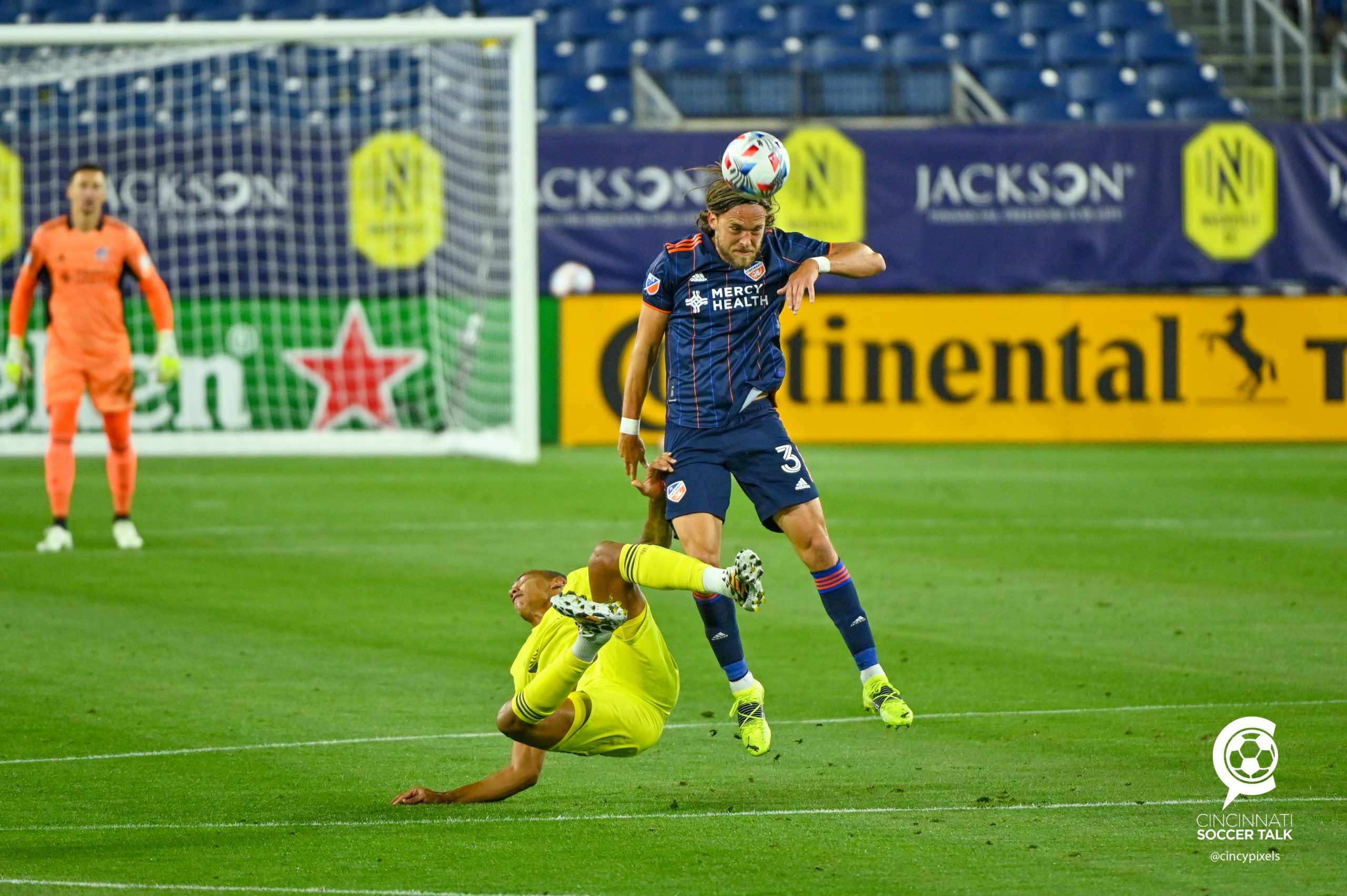 The challenges for FC Cincinnati’s road match Saturday at New York City FC started before the club even left town.

Midfielder Luciano Acosta, one of the Orange and Blue’s new designated players, suffered an elbow injury in a fall late this week and did not make the trip. In pregame warmups, goalkeeper Przemyslaw Tyton was a late scratch from the starting lineup after some tightness, forcing coach Jaap Stam to turn to backup Cody Cropper.

Then play at Yankee Stadium began, and things snowballed and turned ugly.

New York City snuffed out some late first-half momentum for the Orange and Blue with goals in the 53rd and 58th minutes and added two more after the game was out of reach in a 5-0 victory. All five goals from the hosts came on set pieces. It’s FC Cincinnati’s worst loss since falling 7-1 at Minnesota United on June 29, 2019. The club has conceded seven unanswered goals since going 2-0 ahead of Nashville SC last week.

FC Cincinnati drops to 0-1-1 with one point and could be back at the bottom of the Eastern Conference table pending Inter Miami CF and New York Red Bulls results this weekend. New York City moves to 1-0-1 with three points.

“There’s not a lot to say,” said left back Ronald Matarrita through club translator Anwar Chagollan in a postmatch videoconference. Matarrita, facing his former club, served as captain in Acosta’s absence. “The team should have played better. Five goals coming from set pieces is unacceptable. We really have to look at ourselves and see what we did wrong in order to improve on that.”

Said Stam, “When you concede five goals from set pieces, that’s to me quite worrying and quite frustrating as well. You need to be mindful, you need to be aggressive and you need to be very sharp in defending balls.”

New York City got the scoring underway in the seventh minute when Jesus Medina pounced on a loose ball in the box off of a free kick.

“We played pretty well in the first half,” Matarrita said. “We need to play with a lot more patience when we gain possession of the ball. Things don’t always go to plan. We need to work hard on that.”

Stam’s side entered halftime looking like it had some things to build on. But New York City wiped that away in the second half.

In the 53rd minute, Cropper came off his line to try to grab a New York City corner. In an attempt to head it away, Nick Hagglund knocked it in for an own goal.

“You concede during the game when that happens, the heads are going down,” Stam said. “It’s difficult to stay in the game. We need to create something because it’s normal when the opposition feels very comfortable after they go down and score a couple of those goals. They can go forward and play freely.”

New York City added its third goal just moments after the own goal. On a free kick 25 yards out, Gudmundur Thorarinsson curled one around FC Cincinnati’s wall and into Cropper’s net for a 3-0 lead.

In the 67th minute, Valentin Castellanos collected a New York City corner, and his shot deflected into goal off Hagglund’s leg. Medina rounded out New York City’s scoring by notching a brace in the 83rd minute, curling one after a short corner over a leaping Cropper and into the top corner, much resembling Nashville SC’s Randall Leal’s goal a week earlier.

FC Cincinnati’s best chances at goal in the second half came in the 70th minute. Off a Haris Medunjanin corner, Brenner and Tom Pettersson had shots inside the 6-yard box, but Johnson saved both in quick succession. The game was well decided by that point, with New York City ahead 4-0.

Allan Cruz started in place of Acosta. Stam said he’s unsure of the extent of Acosta’s injury but for now is considering him day to day. Tyton felt some tightness warming up in his abdominal or groin area, and he was pulled from the starting lineup as a precaution.

FC Cincinnati will not make excuses for the unplanned changes or new players still trying to mesh with returners just two matches in. There are reinforcements coming, but they will need their own adjustment period. According to the club, forward Isaac Atanga can begin training on Monday, and center back Gustavo Vallecilla is on his way into town.

“Is it about getting used to each other or is it about you need to have certain attention to win a game or be successful from your position?” Stam said.

“You need to show your ability, what you can do, where you can make a difference.”