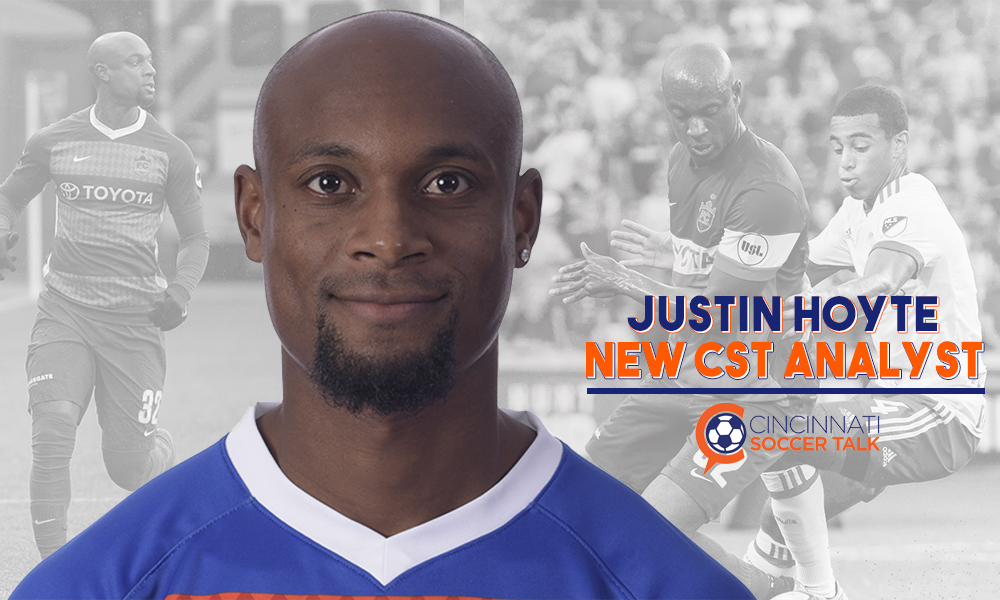 Cincinnati Soccer Talk announces today the addition of former FC Cincinnati right back Justin Hoyte as a co-host and analyst.

It’s still uncertain when the 2021 MLS season will begin or when FC Cincinnati’s new West End stadium will open. But one certain thing is when those things happen, Cincinnati Soccer Talk will be ready.

Hoyte earned his way onto FC Cincinnati’s roster as a trialist in 2017, playing three seasons for the Orange and Blue. He was integral to the club’s run to the U.S. Open Cup semifinal that year and had 28 appearances in 2018, helping the team lift the Supporters Shield trophy.

Before coming to Cincinnati, Hoyte’s began his career in his native London, making an appearance for the 2003-2004 Arsenal side that went through the Premier League unbeaten. He also made stops at Sunderland, Middlesbrough, Millwall and Dagenham & Redbridge.

“During my time with FC Cincinnati I’ve always had a special connection with the fans and I’ve always admired what the guys at Cincy Soccer Talk were doing to connect the fans with all things going on with FC Cincinnati and the rest of the soccer world,” Hoyte said. “So I feel like joining the team will be a great opportunity to share my knowledge, experience and passion for not only the game of soccer but the chance to reconnect with the amazing fans of FC Cincinnati again.

CST founder Nick Seuberling points to the addition of Hoyte as another step in CST’s progression.

“One of my goals over the past couple of years was to bring on people who had experience playing or coaching soccer at a very high level,” Seuberling said. “We’ve done that with Coach Brad Gough, D.J. Switzer and Michael Lahoud. Now we’re adding Justin Hoyte, someone who has experience not just playing in MLS and USL, but the Premier League in England. It doesn’t get much higher than that. Can’t wait for him to get started with us.” Seuberling said.

Hoyte is currently back home in England with his family but will be returning soon to the States to resume his season for the Palm Beach Stars of the UPSL who are currently competing in the UPSL Division 1 playoff. Once his season wraps up you can expect to see Hoyte hop into the podcast rotation, featuring in a number of our programs.