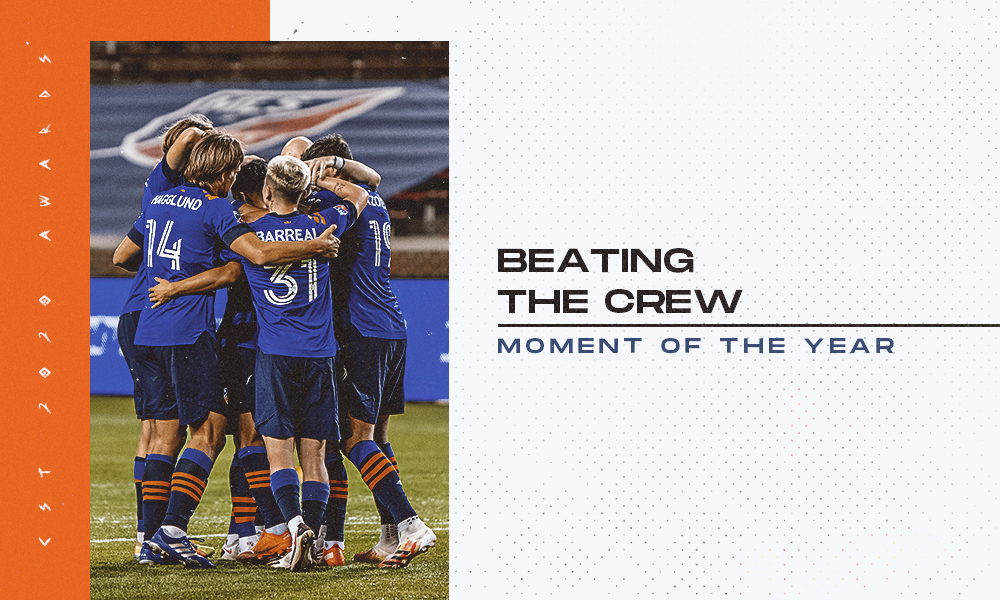 The Cincinnati Soccer Talk staff voted on its top moment for FC Cincinnati in 2020. Here are the results

The 2020 season was a long, strange trip for every MLS team with the COVID-19 pandemic throwing a monkey wrench in scheduling, transfers and other aspects of the season. This was even more so for FC Cincinnati well before things shut down in March. For our Moment of the Year, CST staffers considered things that happened off and on the pitch. There are five moments we considered. A CST staffer who voted for a moment gave their explanation of why. Here are the results:

I voted for Ron Jans’ resignation as my moment of the year because it completely altered the course of the 2020 season. Things were looking up during the off season and generally FC Cincinnati thought they had their GM, coach, and a significantly improved squad. If you think about this in your traditional work environment when you lose a “key employee”, bad things often happen. A lot of times, those organizations fail when there isn’t an inherent or sound structure in place behind that employee. Jans no doubt had influence on which players returned after the 2019 season, which new additions he wanted and how he felt those puzzle pieces fit into place but if FC Cincinnati truly had a direction, someone could have picked up the pieces. Not only did his removal take off a lot of people’s Orange & Blue blinders but it revealed some serious holes in the foundation of the club. The recruiting policy of Gerard Nijkamp failed to put together a team that had a structure of play. New designated players were frequently played out of position with little to no alternatives behind them. More than anything, I look at the Jans moment as the point where the veil came down and FC Cincinnati started to be treated like every other sports team in this town.

My moment of the year came in the 64th minute of the first game of the season. Cincinnati had signed a marquee striker, Jurgen Locadia, and fans were anxious to see him work. He was the largest signing in club history, had a nice EPL pedigree and was replacing a DP from year one that hadn’t lived up to expectations and had checked out of the club long before he left. So many hopes and expectations were resting on Locadia. He had missed all of the preseason matches. He was training with the full squad but when would he take the pitch? When that moment happened against the Red Bulls, there was a magical feeling of hope. He looked a little rusty but the effort and quality he brought to the game was immediate. He started creating chances right away and rewarded fans with a goal within 20 minutes. Though the season spiraled after that with Covid and less than exciting results, I’ll still remember that first game and what hope and excitement felt like.

Rob Peirce: Beating Atlanta United in MLS is Back Tournament

My Moment of the Year is FC Cincinnati beating Atlanta United in MLS is Back Tournament group play. In new coach Jaap Stam’s first game, the club got humiliated by Columbus Crew SC. Stam threw the 4-3-3 out the window, switched to a 5-3-2 and bunkered. Slowly the Orange and Blue crept out of their shell, and with a 76th minute strike from Frankie Amaya bounced back off the mat with a victory, proving themselves very much alive in group play.

It was FC Cincinnati’s best response of the year, with Stam showing he can change tactics when it’s called for, and set the stage for qualifying for the knockout stage. And Amaya’s first MLS goal couldn’t have come at a better time.

In a year where pretty much everything was disappointing, FC Cincinnati’s upset 2-0 win over New York Red Bulls in the MLS is Back tournament in Orlando was the Moment of the Year for the Orange and Blue. The win meant that FC Cincinnati had secured a place in the knockout stage of the tournament, which after their opening game was a miracle in itself. That game also featured one of the handful of times FC Cincinnati scored from open play this season as well when Yuya Kubo opened the scoring just before halftime. Although FC Cincinnati went on to lose in the next match, it still was a big achievement for the struggling club this year.

The 2020 season started in turmoil for FC Cincinnati. Even before the virus, Cincinnati was dealing with another last-minute coaching change. Covid may have wrecked the plans of everyone but with all that horror came precious time for the Orange and Blue to adapt under a new coach. That didn’t translate into time on the pitch but it did mean Stam would get to coach at nearly the start vs a half-season interim situation that fans are all too familiar with.

Stam came out of the gate with a shock. First, he received a rude awakening to MLS via a Columbus Crew beatdown in MLS is Back. He was forced to adapt and FC Cincinnati since parked the bus and has slowly tried to back out of the parking spot since. Last year was the year of getting scored on. This season ended up being the year of hardly scoring. Like a pendulum swings, so has FC Cincinnati but all the while staying in the same last-place spot. So what is the moment of the year when good moments are hard to find? Look no further than revenge. FC Cincinnati played the Columbus Crew and played them again and again and again. Finally, in that final match, FC Cincinnati gathered up a precious and rare two goals to beat their rivals and got the final word that they would not be run over. Did Columbus win the series? Sure, but that last match was a matter of pride. Columbus lost to last-place FC Cincinnati and that still feels good.