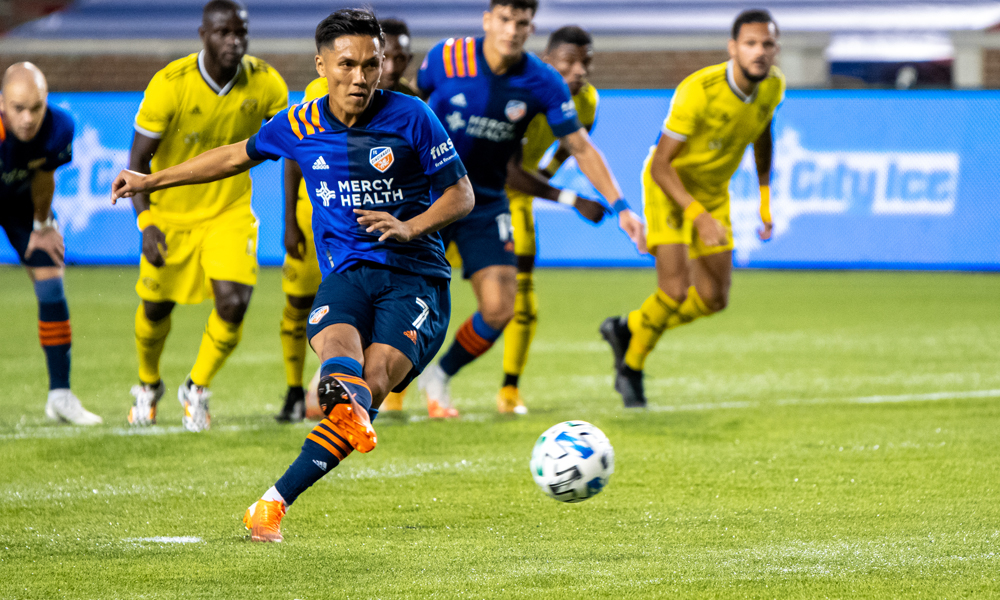 FC Cincinnati wraps up the 2020 Hell is Real Derby season with a 2-1 victory over in-state rivals Columbus Crew.

After a couple of losses and a draw to rival Columbus this season, it looked like this rivalry was becoming anything but one. However, on a day where some showed their lack of support for the club, the team showed its willingness to fight, winning 2-1 against the Columbus Crew.

Wednesday night’s matchup against the Columbus Crew was the best game FC Cincinnati has played all season by a country mile. Every part of the team came out to play in the match, and I don’t think I would give anyone a negative ranking.

“We got a very good result,” said Head Coach Jaap Stam in a postgame press conference. “A result that we deserved and were waiting for as well. I think we were the better team for the majority of the game, especially the first half. (We) created a couple of very good opportunities, scored one from a penalty, of course, and not giving anything away.”

The most notable performance of the night was the play of youngster Alvaro Barreal, one of the team’s newest signings. Barreal was instrumental in the first goal even becoming a penalty, as he needed to weave his way through a couple of Crew defenders to get a cross into the box, which then caused the penalty situation wherein Tarbell fouled Cruz. Barreal influenced the game throughout the whole runtime, as at the end of the match, instead of taking the ball towards the goal like an inexperienced player might, he took it to the corner because he knew he needed to just waste some clock. This move then caused a Crew defender to recklessly foul him, basically ending the match. Alvaro Barreal has only been with the team for a short while, and he is already one of the most important and influential members of it.

Barreal wasn’t the only standout from the match, however. Bobby Edwards, in his first MLS match, almost kept a clean sheet had it not been for the penalty kick from Pedro Santos. Edwards did spectacularly at the end of the match, when Columbus was sending everyone forward, to continually punch the ball out of the box, and not give the opposition any chance to even sniff a shot.

“That was probably, in my opinion, the first time we’ve had a start to finish collective match,” said Goalkeeper Bobby Edwards in the postgame press conference. “We know we’re capable of that. It’s just taken some time to get there but I’m proud and I’m overjoyed.”

A couple of other great performers were Nick Hagglund, Kamohelo Mokotjo, and Haris Medunjanin. Medunjanin’s time in Cincinnati has been headlined by his skill on set-piece opportunities, and while sometimes they have been off the mark, tonight, he was completely on point. While the assist on Hagglund’s goal will see the most plaudits, and for good reason, there were many other passes that could have equally set up a goal.

The fan base has been waiting for Mokotjo to finally see his first action as a starter, and that wait was well worth it, as his introduction into the beginning of the match was an immediate impact on the flow of the team’s attack. There were multiple times I noticed a great sense of awareness and vision from the former Brentford midfielder, as well as a great knowledge of where he needed to be. He allowed Medunjanin to do his job much more easily, knowing Mokotjo was holding down the fort.

Lastly, Nick Hagglund had a great match. Not only because, of his absolutely stupendous celebration, calling back to vintage Cincinnati Bengals running back Ickey Woods with his rendition of the classic “Ickey Shuffle”, which got a smile out of FCC fans, but also because of his imposing presence in the box. He showed a great ability to control the aerial game of Columbus and made sure they didn’t get anything going in that area of the final third, which is so important for FCC-killer Gyasi Zardes.

FCC came into the match missing multiple headliners of the squad, including Przemyslaw Tyton, Kendall Waston, Jürgen Locadia, and Mathieu Deplagne. Columbus came into the match also missing absolute gems of their squad in Lucas Zelarayan, Darlington Nagbe and Eloy Room. However, judging by the play of FCC today, it looked like this was the FCC first team. It will be interesting to see what comes of this performance and if the squad possibly changes. However, that is a conversation for another day, as FCC celebrates one of the most dominant performances in their time in MLS.