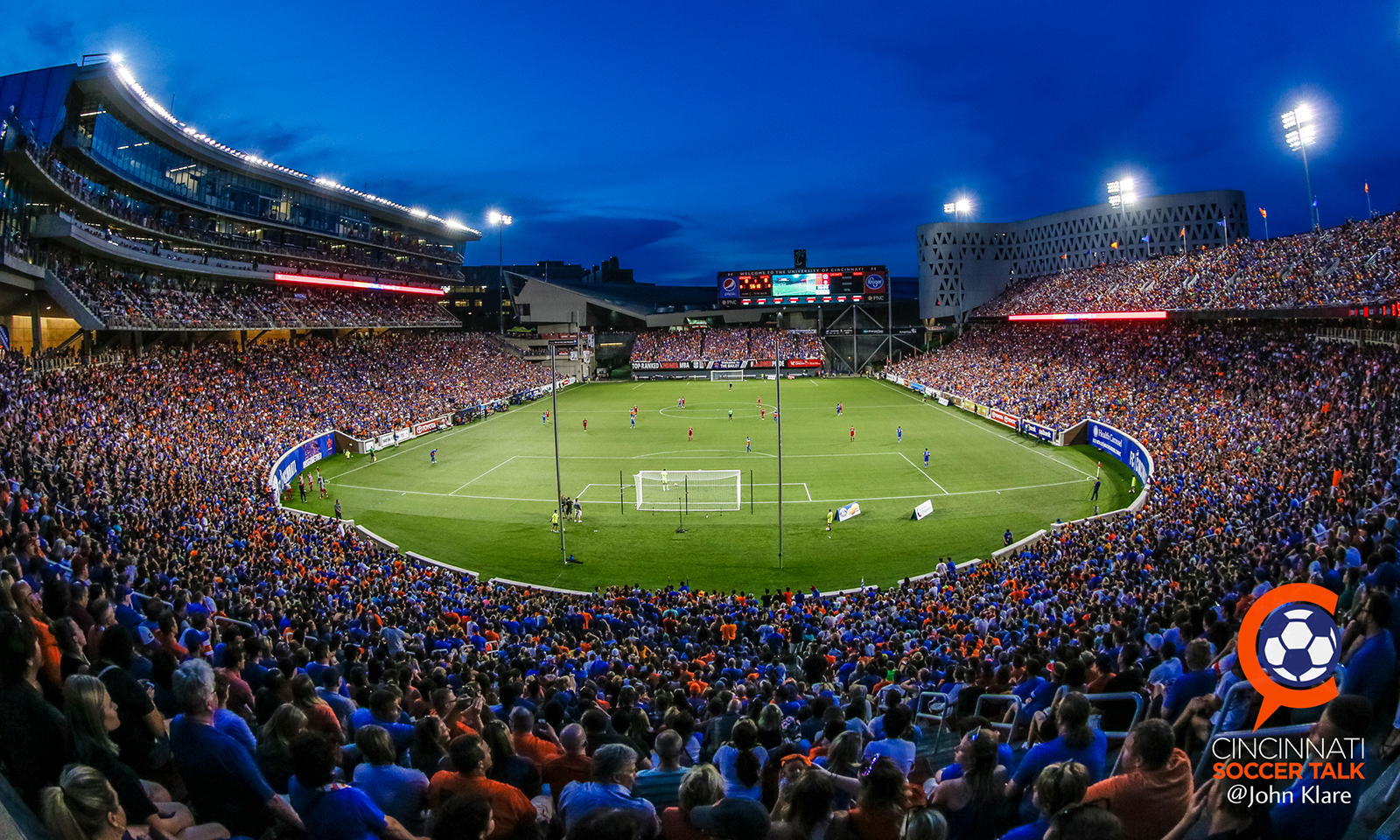 The Cincinnati Soccer Talk staff discusses what it will remember from the club’s first home.

With FC Cincinnati’s last game at Nippert Stadium looming on Wednesday, it’s been natural to take a trip down memory lane. Earlier this month, Cincinnati Soccer Talk looked at the more memorable FC Cincinnati goals and matches. On this week’s podcast , we heard your favorite memories at Nippert. Now it’s our turn. In this roundtable, CST staffers will discuss what they will remember about Nippert — not so much the result of a particular match, but about our experiences as fans.

What is your favorite Nippert memory as a fan?

My favorite memory at Nippert as an FC Cincinnati fan was the Crystal Palace friendly. I went with my dad and my brother and sat in the Bailey, back before the Bailey was sold out. My dad, an English Premier League fan for as long as I can remember, is the reason I first became interested in FC Cincinnati. My brother was a pretty decent high school player at Mariemont and said he once played against Omar Cummings.

We had a blast. We didn’t march, but we did eat at Mac’s Pizza. We baked in the bleachers as the minutes ticked away to kickoff. My dad told us about Kayla, the Crystal Palace eagle that flew from one end of Selhurst Park to the other before home games. He was tickled to see names he knew like Alan Pardew, Andros Townsend and Wilfried Zaha right in front of his eyes. He expected Palace to win but was impressed with the showing FC Cincinnati gave, as was I. It’s a match I’ll remember for the rest of my life.

Great question, there were so many great moments. From the home opener to the Louisville Open Cup match where we knew we were going to face Columbus, then the first ever Hell is Real. But I do have to say Mitch Hildebrandt standing on his head vs. Chicago on ESPN takes it. The NY Semifinal is a close second or third, but that moment will never be forgotten in the FCC lexicon. That was one of the few times where the atmosphere was on another level. It felt like a Big Time match and Nippert responded. The sound would reverberate off the press box and the packed house was just beserk. If you weren’t in love with FCC by then, you were after that match.

The correct answer was any moment Djiby Fall was on pitch but if I had to limit it to one, my favorite moment was the first Hell is Real Derby. For a variety of reasons there was a mixture of anxiety and excitement. The FC Cincinnati fanbase had been knocking on the door of the Crew for a pair of seasons and the MLS push was starting to ramp up. For a lot of fans this was their first moment to show that Cincinnati belonged on the national soccer stage. When Djiby’s goal went into the back of the net, all of those emotions came pouring out and turned into “we can do this.” 2017 was a special season but for me this specific moment took the cake.

My favorite Nippert memory is honestly the first one. I showed up with my family to the first game back in 2016 against Charlotte. I remember waiting in line to get into the match and I bumped into high school classmate Paul Dehner, Jr and with him was Mo Egger. Seeing those two at the match was an eye opener because let’s face it, it was soccer. Getting into the match I remember Sara and the kids wanting food and waiting in line as the match kicked off. I told them I didn’t want to miss any more of the match so I sat down at my seat in 118. A minute or so later, Sean Okoli’s scissor kick happened right in front us. It was awesome. I sat there through the whole match watching the Bailey, and seeing more and more people filing into Nippert. I couldn’t believe it that for the first home game in their history the size of the crowd for a soccer game in Cincinnati. Little did I know that 14,000 was just the beginning of what was to come for FC Cincinnati.

The five years in Nippert have been eventful. Our club was born and grew in Nippert and back then we had no idea what we would happen. My first Nippert memory was showing up to a pre-season match vs Xavier as FCC was trying to create their first USL team. Those handful of us fans in attendance were trying to figure ourselves out also. I don’t think I knew a single person in the Bailey but we took the time to stumble our way through a few chants and get the first look at the future. Imagine going back and telling that small group of hodgepodge fans that in 2021 they would have their own soccer stadium to call home. That those strangers would soon be great friends and even sometimes bicker as families do. More has changed in five years than I ever thought was possible and quite frankly it changed the course of my Cincinnati life. Nippert was home for all of that and she has seen the best and worst of times. While we can’t be there to say goodbye, Nippert will always hold a special place in the heart of early FC Cincinnati fans. The next generation will bear the fruit of those first five years.

My two fondest memories of Nippert Stadium come from the same match – the US Open Cup semifinal vs. New York Red Bulls. First, Austin Berry’s header to put FCC up 2-0. The crowd of 33,000-plus was electric, the energy palpable, and it was at that point where I felt MLS was inevitable, professional soccer was here to stay, and how fortunate I was to be experiencing something unlike anything else I had experienced in Cincinnati sports to that point. And yes, I am aware what happened in the next 15 minutes, which brings me to my favorite memory. I remember my wife asking if I wanted to leave, get a head start to the parking garage, and I said no. I wanted to stay. She asked why, and I told her I wanted to stand and applaud, and I was curious how many others might join in. And there was applause, a show of appreciation for the magical run. The FCC players joined in. Then I saw the Red Bulls players and staff join in. For all the disappointment fans had endured in recent years in Cincinnati sports, there were no boos, no bitterness, very little fist-clinching about some poor defending down the stretch. None of that. Just appreciation, love for the club, love for the sport, love for our city. It was very, very cool. And I will never forget it.

My favorite memory of Nippert Stadium was getting to share it with someone else. My childhood best friend moved to Portland, Oregon, after we graduated from high school, years before FCC was even a rumor. For years he got to be a supporter for an up and coming MLS franchise and I was envious. Finally the day came when MLS awarded Cincinnati our own franchise and we made plans that very day. The stars aligned last summer and I took him through all the highlights: drinking in the beer garden at Mecklenburg, the mile long march to the stadium, and a full 90 minutes plus in the Bailey. We burned in the July sun, we screamed ourselves hoarse, and we witnessed a surprise 3-2 win against the Houston Dynamo. It’s easy to take our match day atmosphere for granted, especially for season ticket holders who come so frequently to the point of routine. Witnessing the march and the Bailey through my best friend’s eyes – a man who ignited my passion for soccer as a kid – helped me to truly appreciate the experience. What we all created at Nippert Stadium was special.

It’s easy to think about big moments that happened on the pitch but for me, my memories of Nippert Stadium aren’t about the USL or MLS or wins or losses. For me, I will always remember that feeling in the Bailey that we will never quit. Never waiver. Never surrender. If the team is up, we’d celebrate. If the team was down, we’d work harder. Until the third whistle at the end of the match, there was a belief that by sheer will, we could influence the result. I remember more than one game turning to leave at the end of a match and only then realizing that I was soaking wet as my cold jeans stuck to my legs walking up the steps of the Bailey. I knew I had given my all. There was no better feeling at that moment.

Nippert Stadium holds a special place in the hearts of FCC fans because of the great memories that were made there. For me, experiencing games at Nippert with my wife and kids and our close friends is something we always talk about. Going to Nippert and experiencing a match with people you love being around is a great experience. New friends were made as well. The other big game moment was the US Open Cup win over the Chicago Fire was absolutely incredible. Throughout my life, I have been blessed to experience amazing sports moments but that night was one I will never forget. There was a feeling around that stadium that something special was going to take place. Getting to experience that with my family and our friends is something I will forever be grateful for.