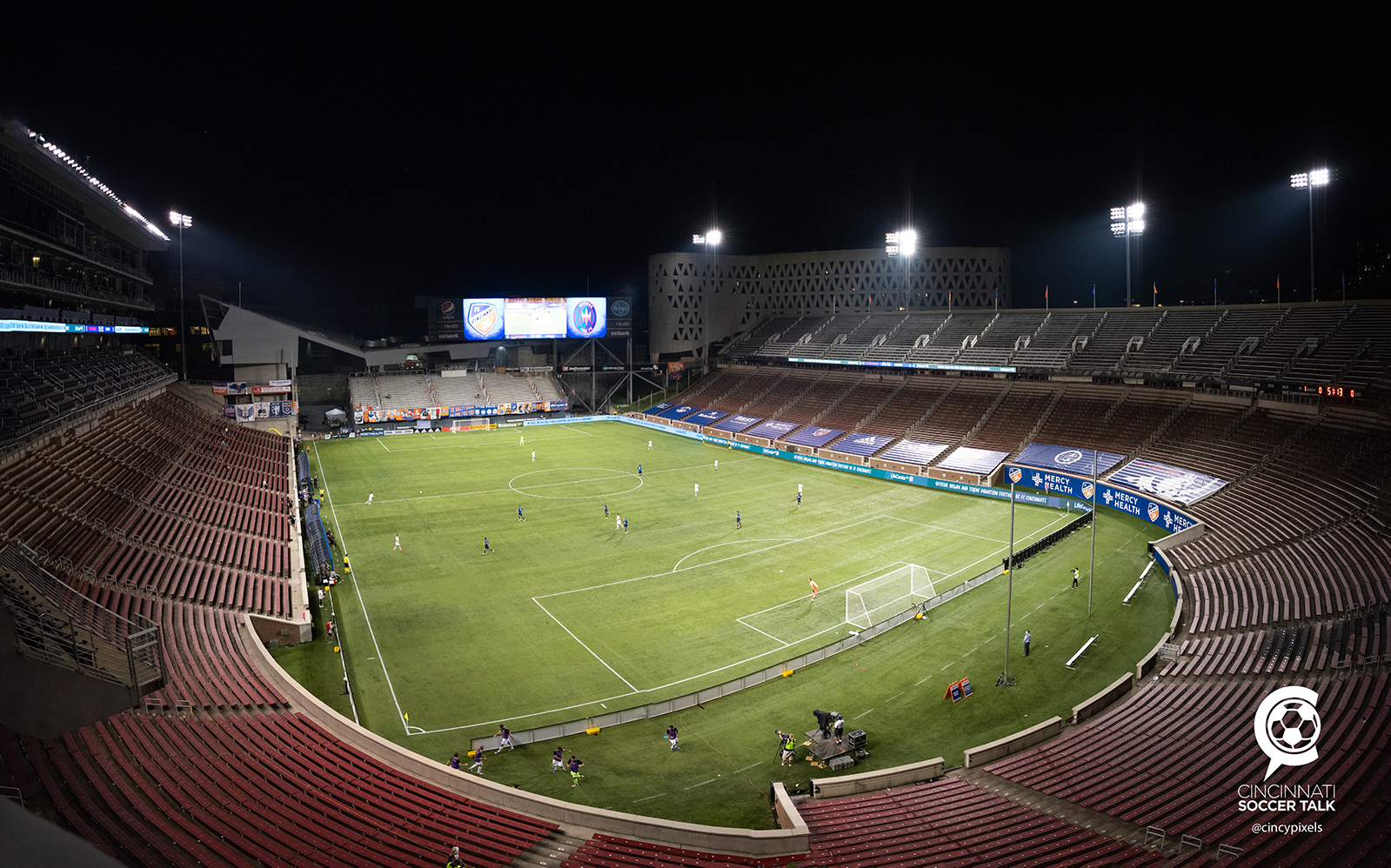 The Orange and Blue host Sporting Kansas City on Wednesday in their final game at their home since beginning USL play in 2016.

It’s not how anyone wanted it, but the end of FC Cincinnati’s time at Nippert Stadium is here.

The club sees itself again at the bottom of the MLS table and will bid goodbye quietly to Nippert, its home since its inaugural USL season in 2016, in front of an empty stadium because of the COVID-19 pandemic. Next season the scene will shift to the new West End stadium.

FC Cincinnati’s last match at Nippert is at 7:30 p.m. Wednesday against Sporting Kansas City. It concludes a five-match homestand that has also not gone the way the club had hoped, with just three points in the previous four matches.

The Orange and Blue (4-12-4, 16 points) will hope to leave one last positive memory at Nippert against a Kansas City side that sits atop the Western Conference (10-6-3, 33 points). Spencer Richey and Siem de Jong returned to the starting lineup against Minnesota United FC on Saturday, with Zico Bailey making his first MLS start at right back. Jurgen Locadia returned to action, and center back Kendall Waston was available as a sub.

Kansas City’s form is on the rise. After a loss to FC Dallas and a draw to Chicago Fire FC — both on the road — Peter Vermes’ side battered Colorado at home on Saturday in a 4-0 victory.

Alan Pulido, Johnny Russell and Gadi Kinda each have six goals for Kansas City, and five players have at least three assists. Goalkeeper Tim Melia ranks seventh in MLS with 51 saves and has a 70.8 save percentage, facing 72 shots.

As of Monday, Greg Garza, Caleb Stanko and Przemyslaw Tyton were not medically cleared to play in the match, according to club game notes.

Locadia subbed on in the 58th minute on Saturday. He looked active on the left wing and produced one shot on target. FC Cincinnati fans are still looking for offensive fireworks for the designated player. He has just one goal this season, all the way back on March 1. Will coach Jaap Stam continue to utilize Locadia on the left wing? And can he finish the season with a bang?

Make your own luck

You can argue for days whether the corner kick given to Minnesota in second-half stoppage time on Saturday, leading to the game-winning goal for the Loons, was awarded correctly. But if you’re relying on calls like that to go your way so you can salvage a point, well — you might be at the bottom of the standings looking up. While not exactly dominant in the first half, FC Cincinnati was the more likely to score. De Jong heads one directly to Minnesota keeper Dayne St. Clair. De Jong and Tom Pettersson send chances well over goal. Converting all your chances is an unrealistic thing to expect. But cash in on a few and the club still comes out on top.

With FC Cincinnati all but eliminated from the playoffs, this could be a time for Stam to see what he has for next season. Only three games remain for the Orange and Blue. Bailey made an impressive debut on Saturday. Rashawn Dally might be another name we see more of to close the season. Since his loan ended, Dally has made three appearances as a sub for Stam. Tommy McCabe, Jimmy McLaughlin and Hassan Ndam are the only outfield players who have not seen MLS minutes yet this season. Will Stam let them make a case for themselves for next season?