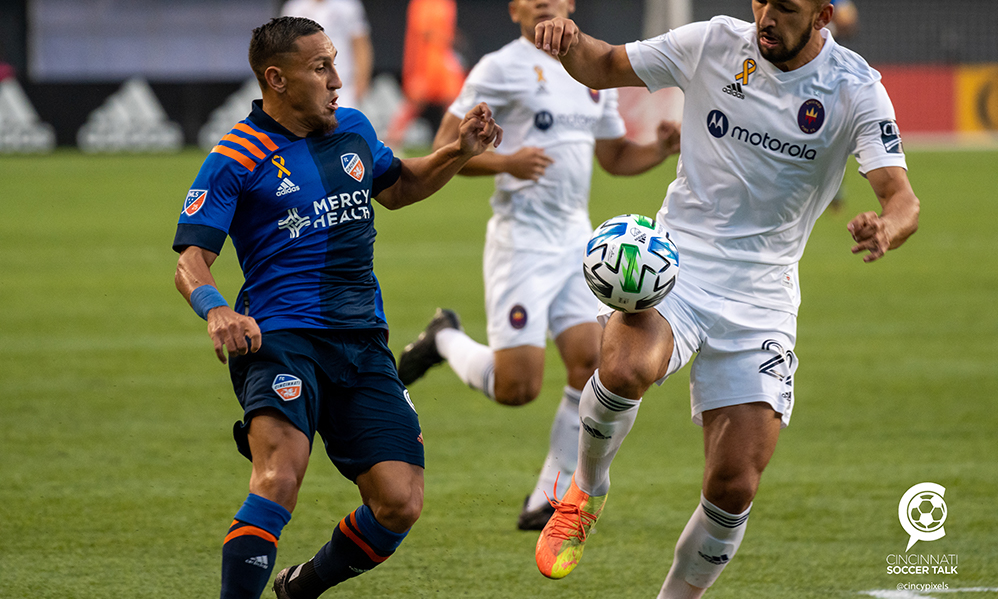 Though coming off a 3-0 loss to Columbus Crew SC, FC Cincinnati is not out of the playoff picture with a chance to improve at New York City FC on Saturday.

FC Cincinnati has recorded five clean sheets through 10 matches this season. That in and of itself is an odd statistic, especially for a team that conceded an MLS-record 75 goals last season. But it gets stranger.

While FCC has managed to prevent a single goal in half their matches, it still owns an MLS-worst minus-9 goal differential. Despite being a touch or two away from turning three scoreless draws into wins this season, FCC also has shown a tendency to turn 1-0 deficits into 3-0 or 4-0 losses.

“When we get one goal, everything comes apart,” said FCC midfielder Haris Medunjanin via videoconference call on Thursday. “You need to show you can come back. In MLS, you always have that chance to come back. The mentality needs to be that we can beat any team if we are 100% focused.”

Case in point: Saturday at Mapfre Stadium in Columbus, where after playing 50 minutes of competitive football against the rival Crew, FCC lost its defensive shape after Pedro Santos broke a scoreless tie in the 52nd minute, and new father Gyasi Zardes then finished them off for a 3-0 defeat.

“When you concede a goal, you should have good organization,” Medunjanin said. “You cannot be flying out. That happened against Columbus. We gave up a goal and everybody was deciding for themselves ‘I’m going to go now.’ There was no connection between the strikers to midfielders, midfielders to defense. You can’t play open like that against Columbus, they’re going to punish you.”

On coach Jaap Stam’s laundry list of items to fix, near the top is this team’s toughness and the resolve to stay in matches after conceding even a single goal and give themselves the chance to come back.

It’s partly due to a lack of confidence and cohesiveness. You also could attribute some of this to the fact that FCC hasn’t exactly been treated kindly by the schedule makers. MLS commissioner Don Garber warned there would be schedule imbalances in order to limit travel due to COVID-19 restrictions, and FCC drew the short straw, being barely 100 miles from Columbus and arguably the best club in the league.

FCC must travel to face New York City FC on Saturday at Red Bull Arena — not exactly a pleasure trip either. The remaining 12 matches in the next phase should be released any day, and FCC hopes things will ease up a bit. Until then, the second-year expansion club will have to take its lumps with a revamped roster and new coach.

“The thing we all need to realize is that sometimes you play against really good sides and they will outplay you at times,” Stam said via videoconference call on Thursday. “We created opportunities to score goals. If we did that, it’s an entirely different situation.”

Of course, one way to flip the script would be for FCC to score first. But heading into the match on Saturday, FCC hasn’t found the net for 484 regular-season minutes, dating back to July 22 in Orlando. They’ve been close. Jurgen Locadia continues to make himself available in the box, but the timing and communication in the final third is very much a work in progress for this team.

“In the beginning of the game, we need to find our strikers,” said Medunjanin. “Give them confidence. Not one ball in 15 or 20 minutes. We know Jurgen is a very good player. We need to find him. If you don’t get the ball, you disappear in the game. We play long ball, which is not our game, we don’t have players for that. We need to do short passes, coming from the sides.”

FCC has been on the front foot in several matches, falling inches short in some cases of scoring the opening goal. But at this point, a 1-0 loss would be a sign that progress has been made. Until FCC stops losing by three and four goals, the perception that they are not ready to consistently be competitive in this league will persist.

“The team has been working very hard to play well, to get the clean sheet,” Stam said. “We could have scored and we could have won. We need to show more in the decisive moments to get three points instead of one or nothing.”

With 12 matches remaining – although not officially announced yet – FCC has plenty of runway to play itself into a playoff position, especially with an expanded field of 10 clubs. By all accounts, training has been intense and productive.

Beginning on Saturday night in the Big Apple, FCC is looking to show tangible progress against a quality opponent.

“I need to see that we believe in each other,” Medunjanin said. “Running into the box. Seeing that we trust the other players to make a play for you. We need to talk. That’s the most important thing in football. To coach each other, that you are free, that you can turn, that you can attack. Right now, everything is in motion.”