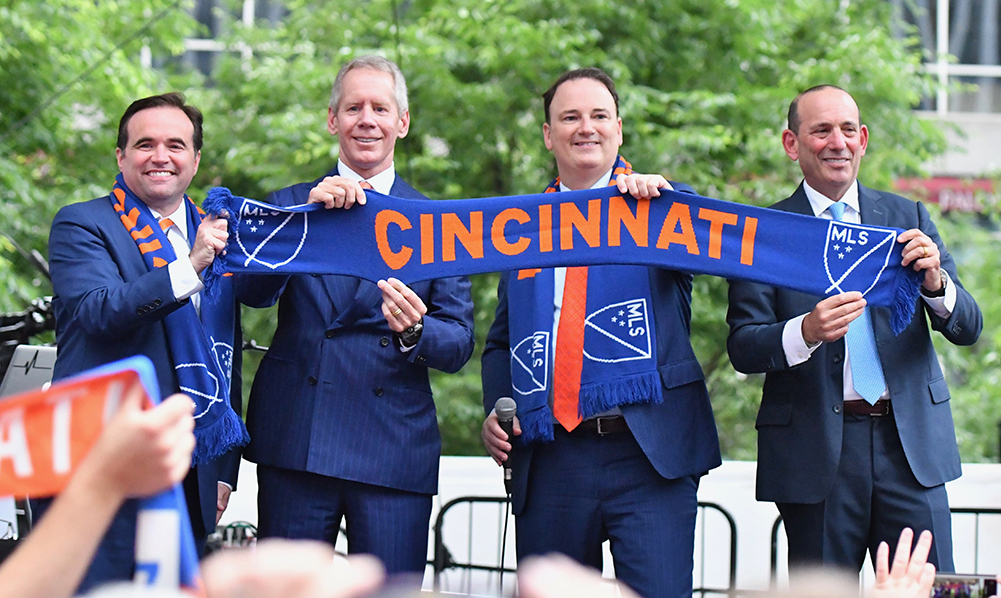 Clay Winstead says “Nonstop Flight,” the documentary about FC Cincinnati’s path from a concept to an MLS team, is a story you have heard before.

Tell me if you’ve heard this before: a professional soccer startup takes a gamble on a city with a history of failed soccer teams. It galvanizes the community, goes deep in a national tournament, wins a trophy and makes it all the way to the highest league in the land in just four years! Of course, it’s the story of FC Cincinnati, and if you were hoping “Nonstop Flight: The Untold Story of FC Cincinnati” was going to live up to its name and tell you more than what you knew about the Orange and Blue, you would be sadly disappointed.

During its two-hour run time, “Nonstop Flight” takes the viewer through each year of FCC’s history; from a small startup working in coffee shops to an MLS expansion bid. “Nonstop Flight” details the meteoric rise of the club and highlights the big moments fans know and love.

If you wanted to take a trip down memory lane and enjoy a nostalgic look back at all the amazing moments that have defined FCC, I could not recommend “Nonstop Flight” highly enough. If you wanted a documentary that looks past those successes, sheds new light and asks questions about the people and circumstances that made FCC, then you might want to avoid this documentary.

There are plenty of great highlight videos, also produced by 4th Floor Creative, that can help you remember the joys of that first USL game, the shocking win against Chicago Fire in penalty kicks in the U.S. Open Cup or the triumph of winning the 2018 USL regular season. But “Nonstop Flight” rarely digs deeper, and in the process, struggles to justify its own existence.

That isn’t to say “Nonstop Flight” is bad. On the contrary, the documentary is incredibly produced, includes amazing interviews and is very entertaining. Particularly fascinating are the insights from director of soccer operations (employee No. 1) Dan McNally and initial brand ambassador Gary Dejesus. I particularly enjoyed the discussion of Cincinnati soccer culture. But the filmmakers rarely dig deeper than the club narrative. Only three fans are featured in the documentary, all from the same supporter group (The Pride).

The first hour and twenty minutes cover 2015-2017 – where the show details the founding of the club, its first season, the friendly against Crystal Palace and the run to the USOC semifinal — and every moment is just fantastic. Even the suspicious firing of inaugural head coach John Harkes is glossed over for more moments of triumph. It’s a story the club has told before.

Going into the back half of the film, I was concerned whether they would actually cover some adversity beyond a quick title card. Luckily, the 2018 season was rife with intrigue and drama. While the documentary quickly ignored the struggle and controversy surrounding the West End stadium deal, the filmmakers did not overlook the boiling tension in the locker room. While FCC won expansion into MLS, few of the players on that USL squad were guaranteed a spot on that roster.

Cards on the table, this period in the club’s history was the documentary I wanted. I could’ve spent more than two hours on the transition to MLS; the player dynamics within the locker room after that expansion announcement; the competition for starting spots in training; coach Alan Koch trying to win games week to week in USL and preparing for MLS.

One of the best bits from “Nonstop Flight” was the brief emphasis on Corben Bone. As he was fighting for a spot on the 2019 MLS roster, then general manager and president Jeff Berding told Bone he needed to score in double digits for the club to consider signing him. And then Bone did it! It’s an incredible few minutes and proves what this documentary could have been. In the end, it’s too little too late.

As you could expect, the documentary rushes through many of the roster-building decisions that have continued to keep FCC struggling in 2020. But the filmmakers were more than happy to spend a few minutes on the incredible MLS home opener against Portland Timbers. It’s indicative of where the filmmaker’s priorities lie: the club and documentarians want to celebrate their nonstop flight to success. They want viewers to remember the good times and the larger than life moments that brought us to MLS.

I don’t blame the viewers who enjoy this celebration (there are very few things to feel good about in 2020), but as a documentary, I can’t help but miss the conflict, the struggle and the adversity. Documentaries should expose truths and perspectives we haven’t heard before. As it is, “Nonstop Flight” will leave many FCC fans waiting to know the real untold story.