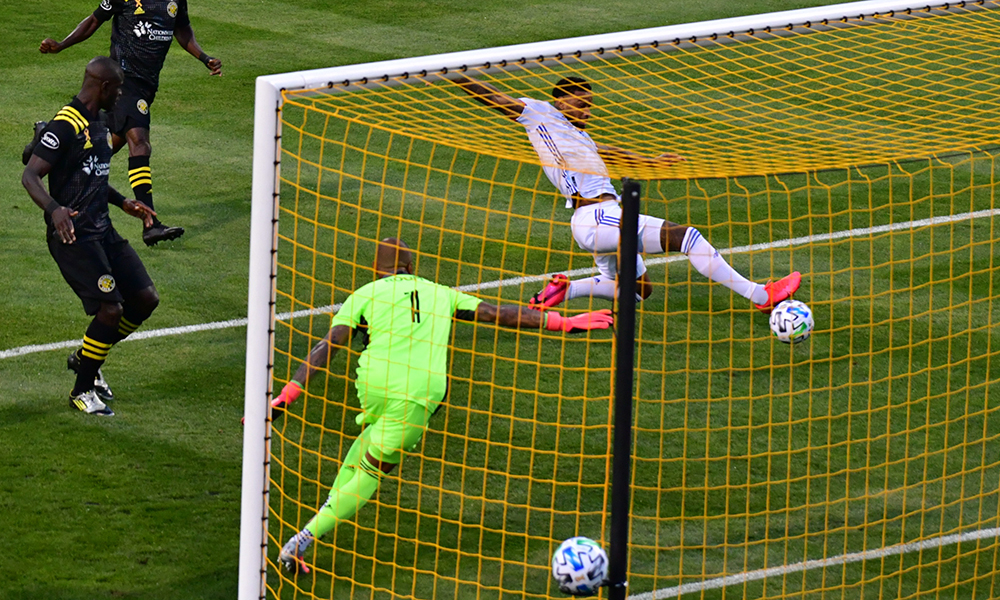 FC Cincinnati had an early chance on this Yuya Kubo cross to Jurgen Locadia but conceded to Columbus Crew SC in the second half and couldn’t recover in a 3-0 Hell is Real Derby loss at MAPFRE Stadium on Sunday.

When you’ve gone 446 minutes without scoring, the climb back from a goal behind can seem like a mountain.

Such was the case for FC Cincinnati at MAPFRE Stadium on Sunday when a Columbus Crew SC cross trickled to Pedro Santos, and Santos tucked it into the left corner in the 52nd minute. Soon after, Gyasi Zardes came off the bench to notch a brace in nine minutes’ time, and the Crew rolled to a comfortable 3-0 Hell is Real Derby victory over the Orange and Blue in front of a limited crowd of 1,500.

In his post-match videoconference, FC Cincinnati coach Jaap Stam pointed to his club’s lack of response after the first goal. After Santos scored, Stam noticed his players’ heads begin to sag.

“The thing is after conceding, you need to have resilience — you want to show that as a team — and not be disappointed in what happened,” Stam said. “I don’t think we had that enough in the second half. You make it very easy for them and difficult for yourself.

“(We were) not aggressive enough, not taking initiative enough going forward, looking at each other at times as well, which makes it very difficult to play against a team like Columbus.”

The Eastern Conference-leading Crew (7-1-2, 23 points) take firm control in the battle between the two Ohio sides. In the last four Hell is Real Derbies dating back to last year, Columbus has won matches in Cincinnati, in Florida at the MLS is Back Tournament, and now in Columbus with a draw sprinkled in between.

The club has also not scored in the regular season since an own goal against the New York Red Bulls in the final MLS is Back Tournament group match on July 22. Though it has recorded three scoreless draws since, that drought, now at 484 minutes, makes falling behind all the more deflating.

“When you’re scoring goals and when you’re winning games, it always gives you a different feeling of course,” Stam said. “But still we could be very happy or satisfied about the previous games — even though we didn’t score —  about the opportunities that we created. (Sunday) we couldn’t score again, but we conceded. After that goal, there was too much disappointment. If that keeps staying in your head … it becomes difficult to even score or win games.”

The club had its own chances with seven shots, most in the first half, but could not muster a shot on target.

Going into the match, FC Cincinnati’s Przemyslaw Tyton and Crew keeper Eloy Room were tied for the MLS lead in shutouts with five clean sheets each. Columbus hasn’t allowed a goal at MAPFRE yet this season.

Joseph-Claude Gyau was again active down the right flank for FC Cincinnati. Perhaps the club’s best chance came in the fourth minute when Yuya Kubo crossed to Jurgen Locadia, but Locaida was a step or two late to receive it.

Columbus established itself as the more threatening side to close the first half and broke through with Santos’ goal. The Crew had 22 crosses, compared to FC Cincinnati’s eight.

“At the end of the first half, I think we started losing grip a little bit,” midfielder Siem de Jong said. “They were coming more in the box. They had a few crosses that were dangerous. We had a few good blocks, but I think in the second half they eventually wanted those crosses on target and they opened the score. We had to change our plan a little bit.”

Said centerback and captain Kendall Waston, “After the first goal, we were chasing the game. We didn’t have many opportunities to come back or to make an equalizer. It was the type of game where little details can cost you the game.”

Any chance the Orange and Blue had at a draw fell apart just moments after Zardes entered in the 62nd minute.

Zardes did not start after missing training because his wife gave birth on Friday, according to the broadcast. Former FC Cincinnati striker Fanendo Adi started in Zardes’ place and had a quiet night with no shots. Columbus played without midfielder Lucas Zelarayán.

In the 64th minute, Zardes knocked in service from Santos. Then in the 71st, he collected his own rebound and punched it in, taking advantage of an FC Cincinnati backline breakdown.

It’s the seventh goal for Zardes in five derbies, including three braces.

Columbus had a 59%-41% possession advantage and outshot FC Cincinnati 18-7 and had six shots on target. Tyton making three saves.

FC Cincinnati midfielder Frankie Amaya picked up his fifth yellow card in the 39th minute, meaning he will be suspended for Saturday’s match at New York City FC. Waston made his 150th MLS appearance in the match.