FC Cincinnati showed character by rebounding from a 3-0 drubbing at the hands of the Chicago Fire to not only earn a point against the Columbus Crew but also look like the side that was more likely to win. However, after 270 minutes without scoring the team is in need of answers going forward. I have three suggestions coming directly out of the Crew match to get Jaap Stam and his coaching staff started.

1: Don’t be afraid to get out in transition more quickly

I believe Stam’s preferred system involves passing the ball around the back in order to draw the opponent out before trying to break its lines quickly. However, with FCC playing in a 5-3-2, getting out in transition quickly and punishing teams on the break can be a real asset.

Time after time FCC’s midfield would win the ball off the Crew and ignore an opportunity to go forward in favor of playing a negative pass. I’m not against playing negative, and I’m not against possession, but I do think teams should transition quickly when given the opportunity.  Below is one such time. Adrien Regattin made a good play on the ball to pick Pedro Santos’s pocket. Immediately Siem de Jong, Frankie Amaya and Yuya Kubo are all in great space to start a counter-attack. 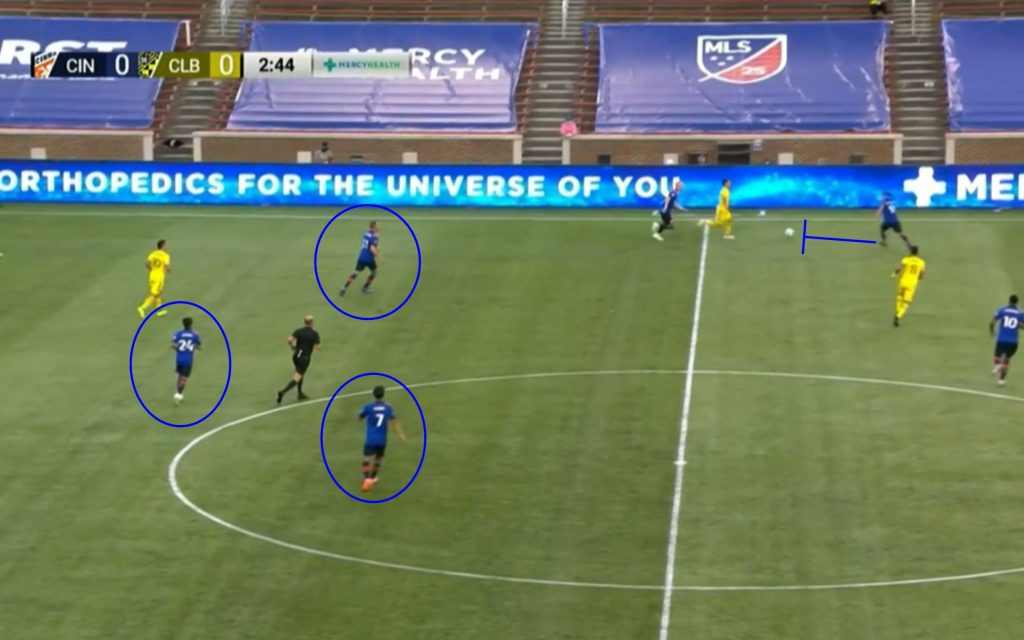 Even after taking the extra touches to cut inside, Regattin still had Amaya and Kubo in space. And, with Joseph-Claude Gyau making his run up the right sideline, the break looked promising. 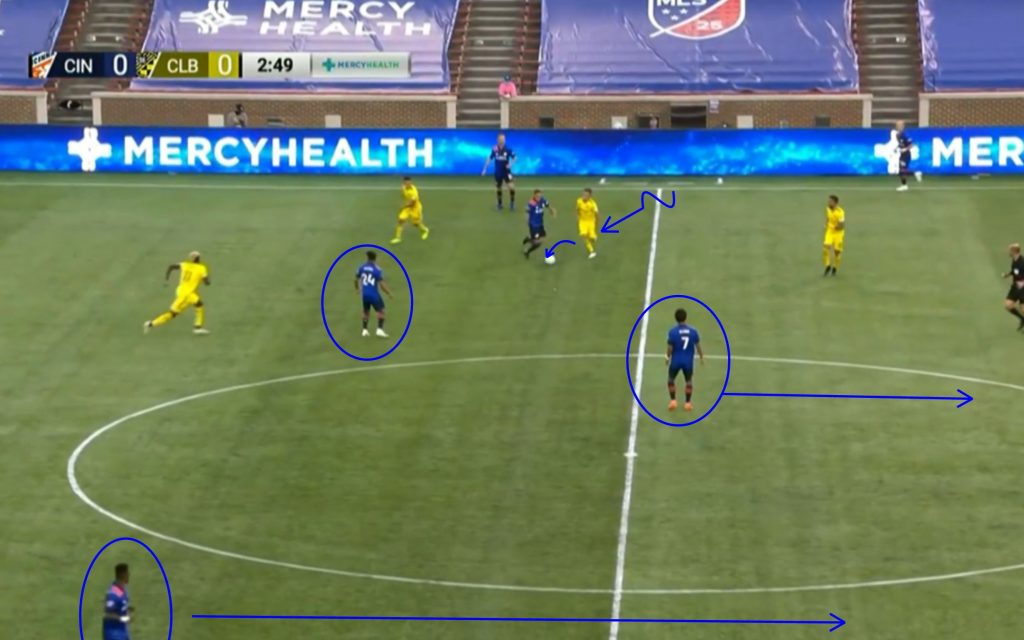 Whether he didn’t see his teammates, lacked the confidence to play forward under pressure or played negatively because of Stam’s game plan, Regattin ignored the chance to go forward. 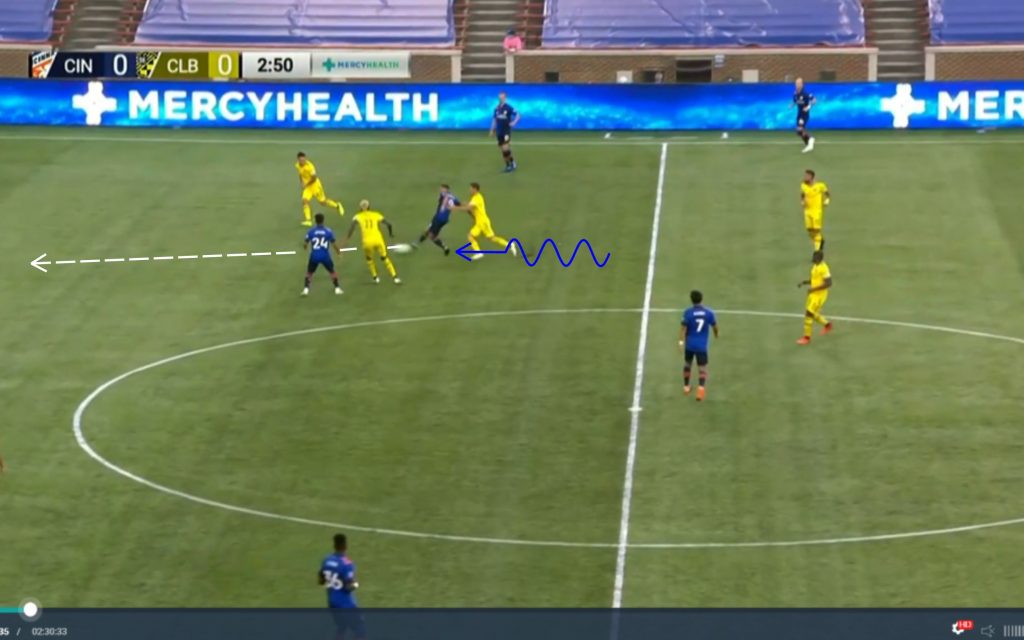 2: Get creative with your runs forward

Too often players run in straight lines, allowing defenders to track their movements easily. Any time you force a defender to make a decision in transition — whether to follow a forward or pass him off, to step to the ball or track a run — that defender might make a mistake. Running in straight lines requires no such decisions.

Here you can see that Amaya picks up the ball and makes a decisive forward pass into the feet of Kubo. Kubo plays well on the half-turn and explodes forward on the break with Regattin, Andrew Gutman and Jürgen Locadia all ahead of him. 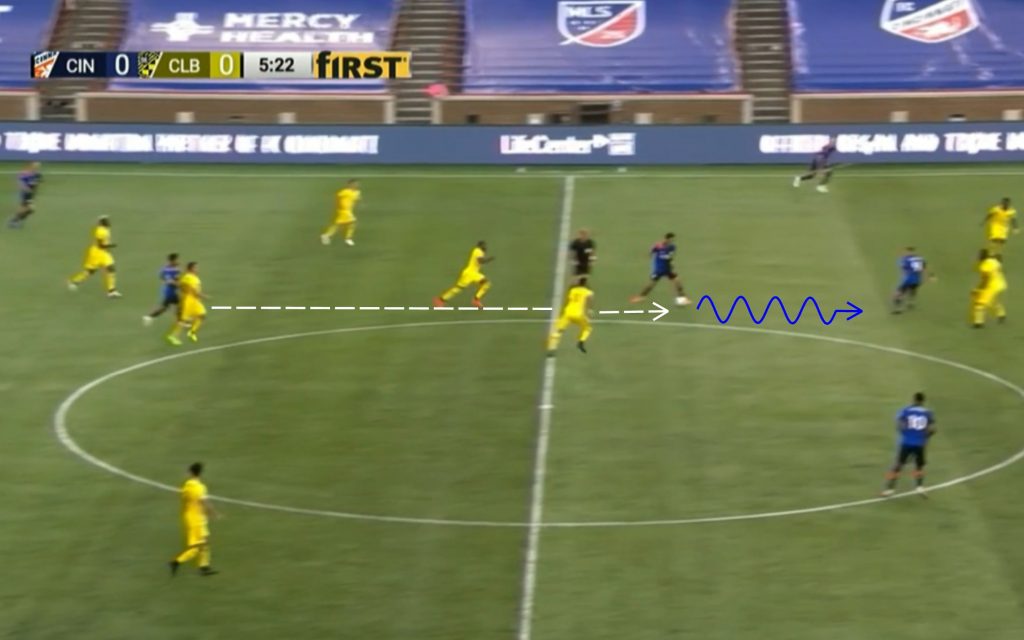 All three of these players make straight runs toward the back line (blue). The green arrows below show just one other possibility, but there are many. Here, I imagine Regattin checking his run and asking for the ball at his feet. This would allow Locadia to make a slashing run across the defense opening up the possibility for a three-player combination. Alternately, if the defender chooses to step to Regattin, Kubo could cut inside instead, creating a 2v2 opportunity with Locadia. 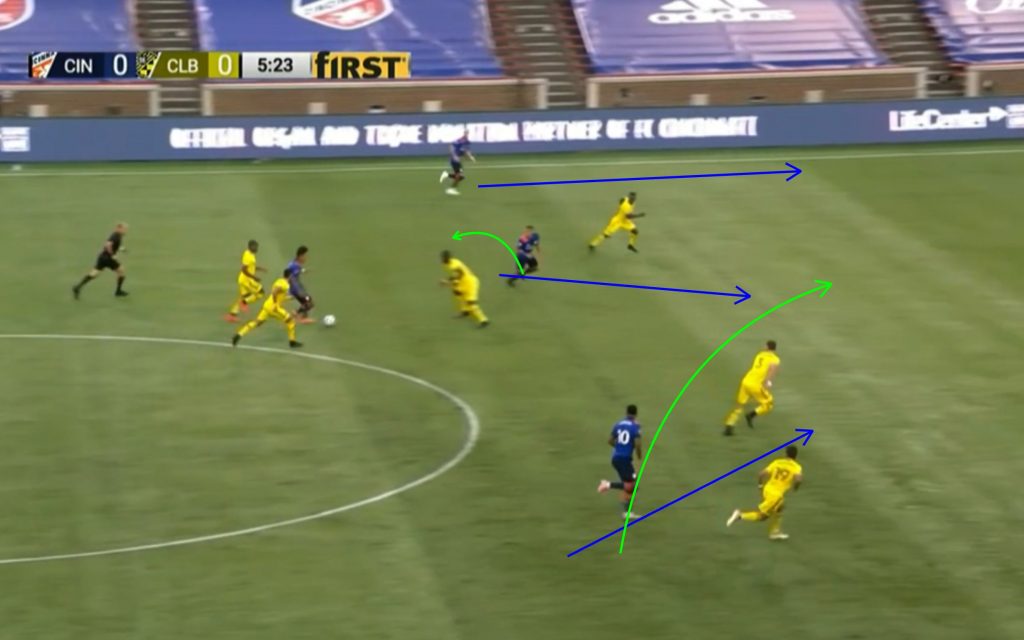 Another similar opportunity shows Locadia on the right flank with a 3v3 break toward the Crew goal, and lots of space in which to operate. This time it is Regattin and Kubo that make straight runs. 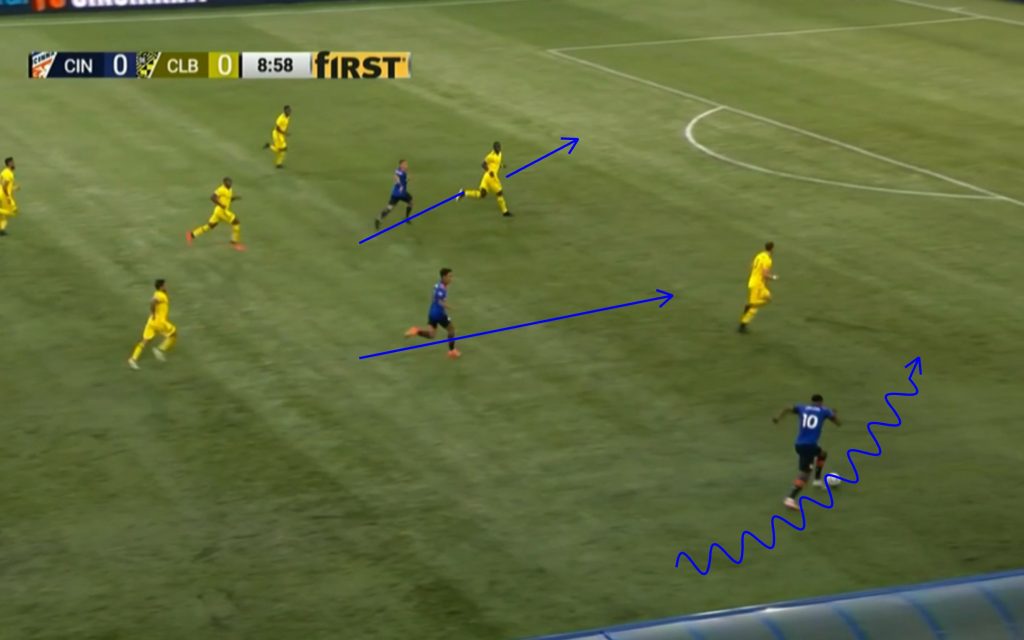 Locadia is eventually closed down and tries to slip a pass to Kubo. Due to the poor angle caused by his straight run, the ball sails harmlessly out of bounds. The green arrows once again show one alternate possibility. I imagine if Kubo moves to overlap Locadia, he would be open with a better angle to receive the ball. If the Crew defender chose to follow Kubo, this would open up space for Locadia to create his own shot or to find Regattin making a run across the top of the box. 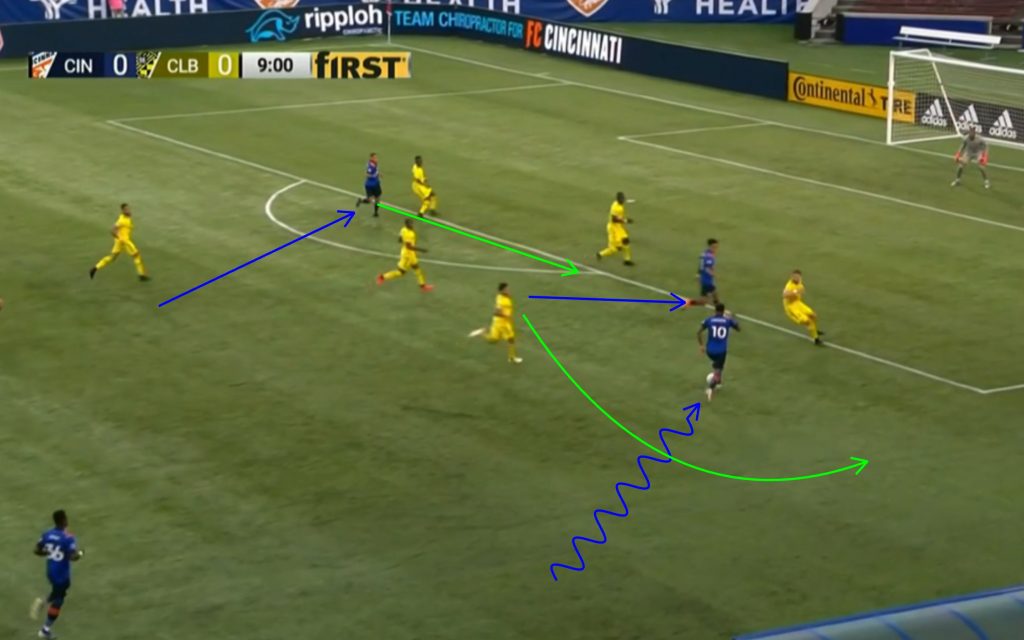 FC Cincinnati created enough good opportunities going forward against the Crew that, with a bit more creativity in its movement, I think it may have been able to challenge Columbus goalkeeper Eloy Room a bit more.

Taking too many touches can be the symptom of many different problems. Perhaps a player isn’t confident in his ability to pick his head up and make a quick pass. Maybe he’s not sure where his teammates will be or what runs they are making. Or, maybe the communication isn’t good enough between teammates to accelerate the speed of play. Whatever the issue is, FC Cincinnati players seem to always take extra touches.

Here, after turning up-field and making a nice move to get into space, Locadia intelligently finds Kubo with a short cutback pass. If Kubo opens his hips and finds Gyau in the center of the park, the electric winger has loads of space to take on the Columbus left back. 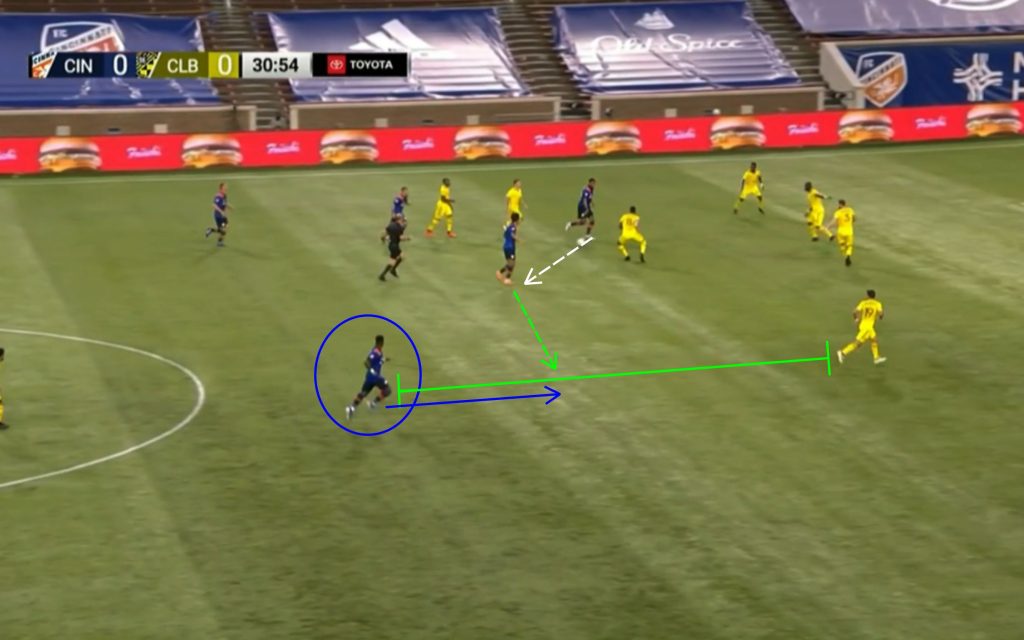 Instead, Kubo takes multiple touches to bring the ball inside. Gyau is forced to check up his run to receive the pass, and Valenzuela is able to put him under immediate pressure, diminishing the chance. 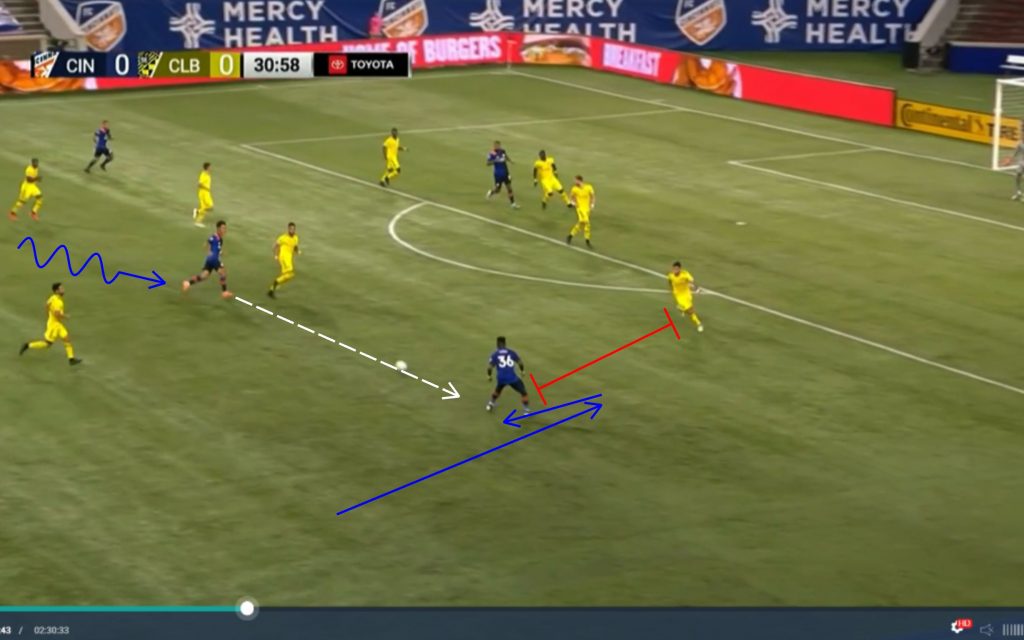 Another break shows Gyau as the culprit. He made an excellent move to cut inside of the Columbus left midfielder, and de Jong was bursting forward in great space. If Gyau found de Jong early, the Dutchman had Regattin and Kubo ahead of him and Gutman wide open on the left wing. 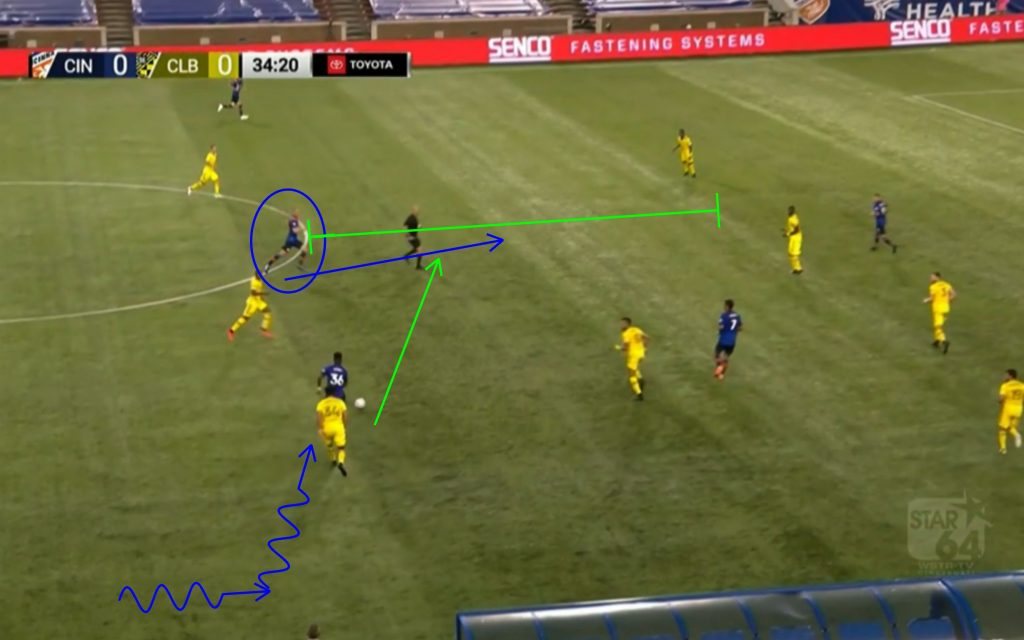 Gyau instead chose to keep the ball for an extra touch or two. By the time he passed the ball to de Jong there was so little space that possession was turned over easily. 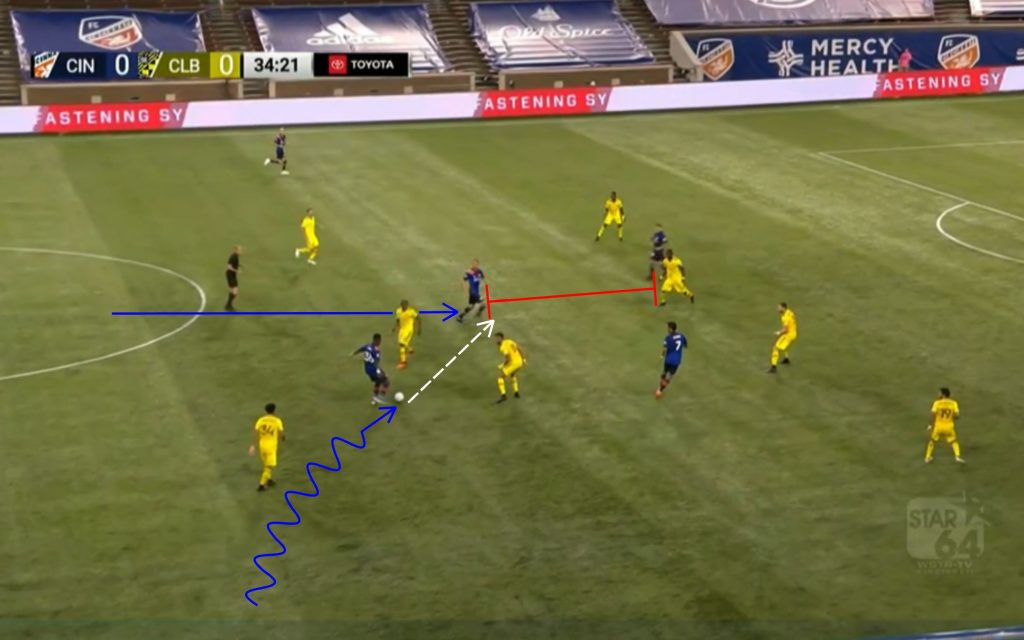 Failing to get forward quickly in transition could be a result of the players over-functioning in Stam’s possession-oriented game plan. The lack of dynamic runs on breaks could be chalked up to a lack of anticipation instead of waiting to see what the player with the ball will do before making a decision. Taking too many touches may just be the symptom of early-season rust, causing mental processing to slow down.

Whatever the reasons, if Stam and Co. can fix these three problems, I predict it will be a long time before FC Cincinnati sees another run of this length without getting on the score sheet.