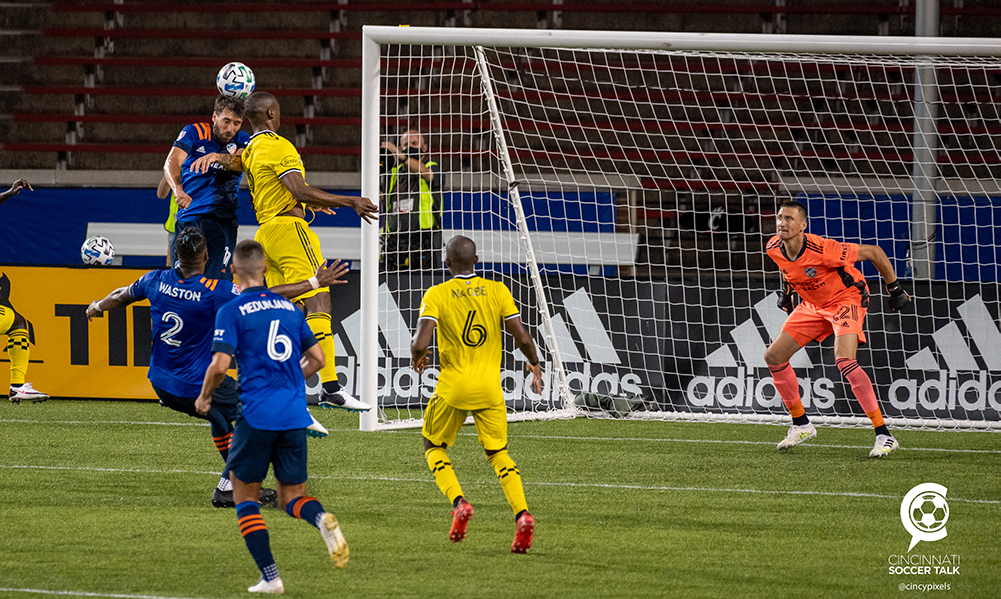 FC Cincinnati kept another clean sheet Saturday in a 0-0 draw against Columbus Crew SC at Nippert Stadium in a Hell is Real Derby match.

FC Cincinnati was looking for signs of improvement on Saturday night, evidence that they are a different club from when it last faced the Columbus Crew in the MLS is Back Tournament in Orlando.

FCC battled their Ohio rivals for 90 minutes in a physical match featuring 34 combined fouls and five bookings and in the end shared the points in the latest edition of the Hell is Real Derby with a 0-0 draw at Nippert Stadium.

“We started this game well,” FCC head coach Jaap Stam said via videoconference. “We were very organized, focused on what we needed to do. We went forward. We put pressure on them higher up the pitch. We want to continue that. We were the team that was very close to scoring in the second half. Very pleased with the performance and what we showed tonight.”

It was worlds away from the first meeting this season, won by Columbus 4-0, a scoreline that could have been much worse, as Caleb Porter’s club rolled behind two goals from Gyasi Zardes and a world-class free kick from Lucas Zelarayan.

But Stam’s men weren’t about to let their Ohio rivals add to the season’s highlight reel on Saturday. After a disappointing 3-0 loss at the Chicago Fire earlier in the week, FCC got back to its stingy ways.

“The progress has been very good,” Stam said. “We started that first game (against the Crew) well. We made changes. We don’t want to concede. We’ve gotten results that way. Being determined, showing quality on the ball. Where we’re coming from and what we want to do with the team, we’ve made a lot of progress.”

Only Saturday was different. FCC wasn’t only content to sit with five at the back and seek the point. Stam put Adrien Regattin into the starting lineup, the first time he’d started alongside Jurgen Locadia. With Joseph-Claude Gyau being disruptive on the right side, FCC was an attacking threat.

“From time to time, we’re making more progress in the offensive play as well,” Stam said. “I think everybody respects us in what we’re trying to do. If we’re doing it well, we’re hard to beat. Eventually we hope we can dominate the game even more and score goals and win more games.”

Stam shook up the starting lineup a bit on Saturday by inserting Regattin and sending Allan Cruz, Caleb Stanko and Tom Pettersson to the bench. Maikel van der Werff returned from injury to make his first start since the first Columbus match. Siem de Jong was back starting as well.

“I think we played a much better game than in Chicago,” Stam said. “We knew we were going to face a very good team. They make things difficult. We needed to set things straight. Tweak a couple of things. We looked at it from game to game what our setup needs to be. That’s why we made these choices. We made it difficult for them to put pressure on us.”

The Crew had all the attacking weapons at their disposal on Saturday and still could not find the net.

Zelarayan who curled a free kick off the near post for the first goal in the first meeting in Orlando, returned to the starting lineup after missing two matches with an ankle injury.

Zardes nearly found an early goal when he outleaped Kendall Waston in the 12th minute but his header was saved comfortably by Przemyslaw Tyton.

Regattin dribbled through the legs of a Columbus defender and eventually earned a free kick for de Jong just outside the top of the box. Gyau headed a cross just wide in the 18th minute.

“We’re always going to get our chances,” Gyau said via videoconference. “We want to keep a clean sheet so we’re always going to be in matches. We want to be feisty in the back and get out in transition. We’re getting more comfortable in the system. We just need to stick to the game plan.”

FCC’s best chance of the half came in the 44th minute when Gyau found Yuya Kubo behind the defense, but the Japanese forward couldn’t reach the ball before lunging Crew keeper Eloy Room.

Things opened up in the second half for both Ohio rivals. The Crew were inches from the match’s first goal when Zelarayan beat Tyton but missed his mark in the 51st minute.

A minute later, de Jong’s free kick found van der Werff, whose shot was sent over the bar by Room resulting in a corner, but nothing came of that.

In the 55th, Zardes’ cross came across the face of the goal, but none of three players in gold and black could find a touch.

In the 71st, Kubo’s shot from about 25 yards out forced a diving save by Room.

In stoppage time, Medunjanin’s free kick reached Room before a teammate could find a touch, and the full-time whistle was blown before the Crew could get off a free kick of their own, much to Porter’s frustration.

“What we say at the start of the game, let’s go for the clean sheet,” van der Werff said via videoconference. “We played well. We defended well. All positive things. We want to win. We had some chances to score some goals. We played in a different system than we played in Orlando, more compact, less space between the lines, especially against Columbus who wants to play between the lines.”

At Soldier Field in Chicago, a goal in the first two minutes set the tone, and FCC was chasing the match from that point on. Just as they responded in Orlando to the loss to Columbus, they did so again on Saturday night.

“After that first game, everybody had pride in themselves to go and get a result,” Stam said.

Next up:
7:30 p.m. Wednesday vs. Chicago Fire at Nippert Stadium