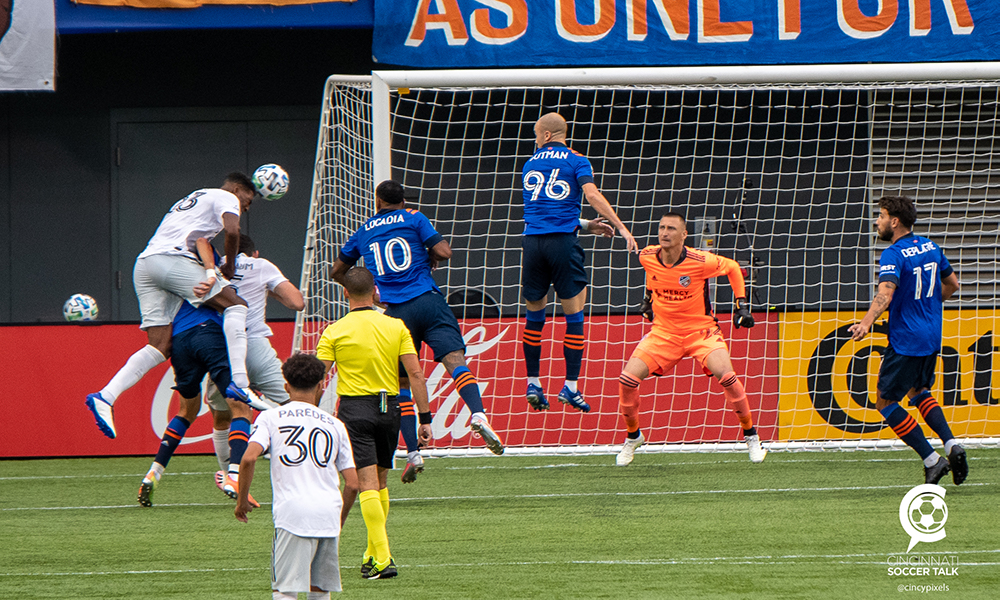 After conceding an MLS-record 75 goals last year, FC Cincinnati has three clean sheets and has allowed just one goal in its last four matches.

It stands to reason that head coach Jaap Stam would have the attention of his FC Cincinnati players based off his pedigree of success in English football, more specifically with Manchester United. But buying into Stam’s system and executing it is one thing. Actually seeing results is quite another.

In a relatively short period of time, Stam has taken one of the worst defenses in MLS history and made it one of the league’s stingiest. In the past four matches, FC Cincinnati has recorded three clean sheets and conceded one goal.

In its inaugural MLS season, FCC leaked goals at a league-record rate of 75. In the first two matches this season, it allowed five goals. It conceded four times in a loss to Columbus in the opening match of the MLS is Back Tournament. Since then, a lot has changed, and quickly.

“A lot of it has to do with the manager instilling belief into us,” said FCC defender Andrew Gutman on a Zoom call with media on Sunday. “He can give us any system in the world, any tactics in the world, and if the players don’t believe in it, it’s not going to work. After we got the first result against Atlanta it just built the confidence up in us. Every game when we get a result, it gives us more confidence to believe in the system.”

FC Cincinnati last year lost matches 5-1, 4-1, 5-2, and 7-1. Stam said his first order of business as head coach wasn’t to immediately turn FCC into winners but to make it a competitive MLS club, one that can get results. It has not been pretty, case in point Friday’s 0-0 draw against D.C. United at Nippert Stadium. But it has been effective.

It’s very early in Stam’s regime and in the MLS regular-season restart, but the returns have been positive.

“I think we’ve come a long way,” Gutman said. “I wouldn’t say it’s just our backline. Our backline, midfield, and forwards are connected a lot more. The spaces in between lines aren’t as big, which allows us to close down as defenders a lot quicker. We’re playing more as a unit. One guy moves, the whole team shifts with him. Last year, guys were getting caught out because we weren’t totally on the same page.”

It is a quick turnaround for FCC after playing Friday night.

“It’s very difficult at the moment,” Stam said on Sunday’s Zoom call. “We need to look at the individual players and assess them and doing the training sessions in a way to improve, but it’s not a lot of time to improve or work on attention to detail. We need to manage it well. That’s what we’re trying to do.”

There are a couple of injury concerns for FCC. Midfielder Siem de Jong was subbed off at halftime on Friday night after picking up a knock. Stam said on Sunday that de Jong was feeling better and training with the team. He will continue to be assessed. Haris Medunjanin missed Friday’s match to be with his wife who gave birth. Keeper Spencer Richey, midfielder Jimmy McLaughlin and defender Maikel van der Werff are still out with injuries.

FCC’s roster should get a boost soon with the arrival of 29-year-old South African midfielder Kamohelo Mokotjo, who signed last week. He is pending his work visa at the moment, so it is not certain when he will join the team.

“I know the quality of the player, so hopefully he can have a big impact,” Stam said. “He’s a very good player. Takes up different positions in the midfield, dropping into positions at times. Has the quality to open up and go forward and get players into attacking positions. How it goes with the visa, I don’t know. I’m not going to say, in terms of dates.”

One FCC defender will have added motivation on Tuesday night. Gutman grew up in Chicago and admits he still has a soft spot for the Fire. Playing at Soldier Field where he watched many matches as a kid will be extra special for Gutman.

“I grew up playing for the Chicago Fire in the academy,” he said. “I know a lot of guys on the team. It will be a pretty special moment for me, especially with Chicago opening up at Soldier Field again. Growing up, that’s all we knew, was them playing downtown. It’s great for the city, great for the club. I’m really excited for the game on Tuesday.”