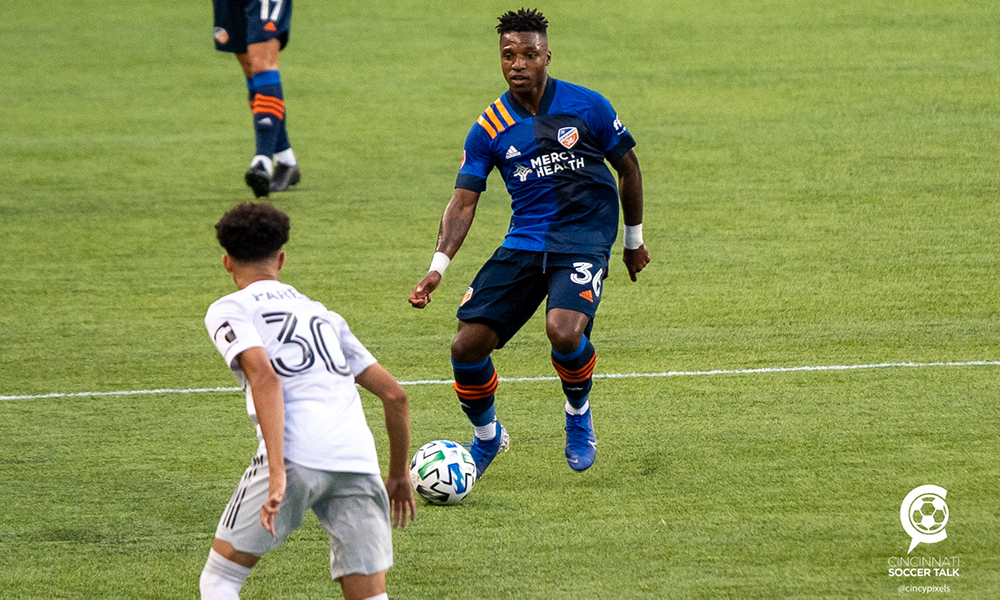 Should FC Cincinnati move Joseph-Claude Gyau to right back? Ken Hoetker says the club should at least try.

Alright, I have your attention and everyone has a take on why this is a great move or a horrible move. Let me make my case why I think this could be the best possible solution for FC Cincinnati and Joseph-Claude Gyau. I gave a brief take on this topic on Talking Tactics (approximately nine minutes in) this past week.

Currently, Gyau has been operating as a wing-back in coach Jaap Stam’s 5-3-2 (3-5-2) system.  The wing-back is a position that has defensive responsibility down the touchline but has much larger contribution on the offense than the traditional right back. If FC Cincinnati stays in a 5-3-2 setup, yes Gyau is the right wing-back.

However, with the potential arrival of  a young Argentine winger, Alvaro Barreal, and the newly acquired South African defensive midfielder, Kamo Mokotjo, Stam seems to have a strong desire to return to the traditional 4-3-3 formation.

The impact of these signings on the roster composition, if general manager Gerard Nijkamp and Stam want to play a 4-3-3, would see a crowded position at winger. Stam potentially would have Yuya Kubo, Adrien Regattin, Jimmy McLaughlin, Rey Ortiz, Gyau and Barreal at his disposal next year, with only two guys starting. That has become a crowded position with a lot of quality depth in it.

The back-line roster composition on the team is capable at center back, and left back has an Andrew Gutman/Greg Garza combo — if both are here in 2021. The right-back position is not in great shape, with only Mathieu Deplagne and Saad Abdul-Salaam. Deplagne and Abdul-Salaam have value in a three man back-line, but if Stam switches to a four-man back-line these guys are not the greatest fit. This is where I could envision Gyau coming in and cementing his name at right-back. Let your imagination run with the right side of the pitch composed of Gyau-Allan Cruz/Frankie Amaya-Barreal (that looks dangerous).

The transition to right-back would not be an easy switch. Gyau would have his difficulties. Alphonso Davies, considered by many to be the best left-back in the world, was switched to left-back while playing for Vancouver. Davies had some rough moments in this transition before he became comfortable and was eventually moved to Bayern Munich.

Why the Davies comparison? Because he was a dynamic player for Vancouver and was breaking teams down much like Gyau is for FC Cincinnati. Vancouver spot started Davies at left-back because they needed help. If FC Cincinnati moved Gyau to right back, it is not as if Cincinnati has abandoned the offense firepower like Vancouver.

FC Cincinnati has about 18 games left in the season. If it is in search of a right back, then why not try Gyau? See if he can make the transition before the team moves to West End Stadium. If it works, it will save the team from having to make a move in the winter window for a right back. FC Cincinnati would put more talented players on the pitch. Also, if Gyau improves his defensive abilities enough he could work his way back into the United States men’s national team spotlight.

This is not a sure bet. Gyau has to commit to the move, and the team has to want the move and expect some difficulties during the transition. However, it is worth an experimental start here or there to see if he could make the move. The potential gain from it working out is much greater than not trying it.