Brad Weigel grades FC Cincinnati’s individual performances in Saturday’s 4-0 loss to Columbus in the MLS is Back Tournament.

In its first match in the MLS is Back Tournament, FC Cincinnati fell to the Columbus Crew 4-0. In Jaap Stam’s first match as head coach, the club started off on the front foot, controlling the match for the first 15 minutes until Lucas Zelarayan put the Crew ahead via a free kick in the 27th minute. Gyasi Zardes netted twice (30th and 49th minutes), while Youness Mokhtar scored his first of the season in the 60th minute.

What are you supposed to do when the backline in front of you fails to track runners in the box? Can’t blame Tytoń for any one goal but he also wasn’t in the position to make the saves. He gets a 4 because the backline consistently lost their shape, and he couldn’t get them back together.

Greg Garza was pulled at the half and had little impact. He had three positive passes, and it wasn’t a shock to see Stam opt for a more aggressive option in Andrew Gutman. It was disheartening to see Luis Diaz and Harrison Afful have their way with Garza. Yuya Kubo could help support some on the defensive side, but Garza was clearly a step behind the speedy right flank of Columbus.

It was hard to rate Pettersson effectively because he wasn’t really culpable in the goals conceded. It just wasn’t an inspiring performance as he lost four of five duels. The backline could not get things together, and any time you concede four goals, everyone becomes responsible. Now, many FC Cincinnati fans wanted to see how he could help possess the ball, and he completed 55 of 59 pass attempts. Unfortunately, most were side to side or back and only two were progressive plays. There is still much to be seen from the Swede, and a potential pairing with Maikel van der Werff seems to be in the offing.

Waston is the captain and one of the highest-paid players on the squad. He has a duty to set the tone for both the team and the backline. For him to utterly lose touch of Zardes on both of his goals is inexcusable. Gyasi knew Waston was not up to snuff and consistently stayed off the center back’s shoulder before making runs behind the line. Waston was caught ball watching all night instead of keeping his head on a swivel to watch out for potential attackers. Stam would do well to sit the “captain” against Atlanta until he proves he is ready to compete.

My biggest disappointment out of all the players I was looking to see. His positional awareness was lacking, and his first touch was non-existent. He had several touches where you thought, “what was that?”. I’m not sure it was nerves, but his performance was on par with Alvas Powell’s debut in 2019. Utterly clueless on Zardes’ first goal, he was caught so far out of position (see below) that Zardes was able to sneak in for a 1v1 on Tytoń. For a multi-year vet of the league, he needs to do better. Pending fitness, I see no reason why Mathieu Deplagne should not slot back into his starting spot at right-back against Atlanta. 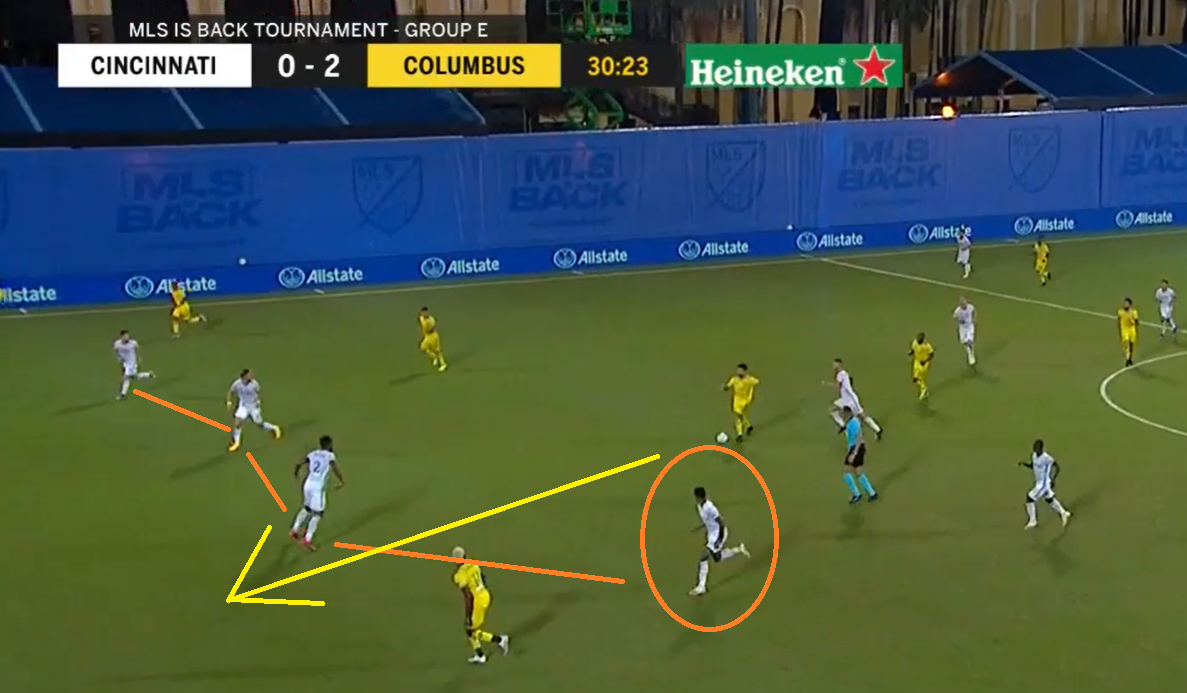 Like layers of an onion, each time the Crew peeled one back, it made me cry. Back to the drawing board for FC Cincinnati’s midfield. I can’t absolve Medunjanin just because he’s too slow to cover ground in front of the backline. He was often slow to close down on attackers and was caught ball watching. Take a look at Matt Doyle’s analysis below. Stam will have to revisit if he can partner Medunjanin in midfield with Siem de Jong or have to sit one of FC Cincinnati’s targeted allocation money midfielders to get both Frankie Amaya and Allan Cruz on the field to clog up the pitch.

Here's play No. 1, the foul that led to Zelarayan's free kick golazo. Watch Medunjanin get dragged out and skinned in midfield… pic.twitter.com/nDOtiUkFgZ

I feel for Amaya as he was asked to cover an exorbitant amount of ground in his first match after a long layoff. Early on he was aggressive albeit a bit late to several fouls earning a yellow card. With de Jong and Medunjanin offering little in defense, the former No. 1 pick was given too large a defensive responsibility. Stam can take heart in his effort, however. He also was much improved in his distribution, completing 56 of 58 passes. He wasn’t afraid to spray the ball around, which we didn’t see enough of last year. I’d like to see a de Jong, Cruz, Amaya midfield to see if FC Cincinnati can control the possession for longer periods of time while eliminating free runners at the backline.

Casper the Friendly Ghost had more touches on the ball than de Jong. He wasn’t involved as expected from the highly anticipated attacking midfielder. He completed just 7 of 17 passes, which is unacceptable from your “10”. I’m not going to rake him over the coals too much because it was his debut in tough circumstances, and you could see brief moments of quality where he’d try to flick a pass on. He just needs to do better to bring some sort of offense into play and not be a total liability in defense.

The only one who landed a 6 for FC Cincinnati. On a night that some of his teammates packed it in, Kubo was still going in hard on chances and tackles into the 90th minute. Moments late into the match he was pressing high and then came all the way back almost into the left-back position just to pick up the ball. He had to feel alone on an island as his teammates could do little to support him. If Stam was looking for some positives, it had to be that he saw Kubo giving it his all for 90 minutes-plus.

Manneh had FC Cincinnati’s best scoring chance of the night in the eighth minute which forced a nice save from Eloy Room. He did look dangerous in his few chances, showing he still has some quality to shine in MLS. Will be interesting to see how FC Cincinnati and Stam can incorporate him into the attack over 90 minutes and not just small flashes.

Regattin and Kubo were my two bright spots. Regattin was played out of position but did well early to drop deep to get on the ball. He was also slippery on the attack. He had one of FC Cincinnati’s bright moments streaking into the box, fooling Vito Wormgoor, who had to leave the match with an apparent leg injury after the plat. In an act of class, Regattin played the ball out of play so Wormgoor could be attended to medically, but once again Regattin showed how he’ll be a threat for FC Cincinnati.

Shored up the left side albeit the match was put away by then. Made a couple of nice crosses but could use some work on the weight of his passes. Encouraged to see if Stam gives him a run out the next two matches to see how he does with a fully engaged opponent.

Vazquez came in for Manneh but made little impact. FC Cincinnati couldn’t possess the ball to get it up to the tall striker. He completed 3 of 4 passes but failed to get a shot off. Surprised he didn’t get a nod to start with the Jurgen Locadia injury which could signal a lack of faith by his manager.

Stanko came in for Medunjanin in the central midfield. The game was 4-0 by then, but it was nice to see him get some minutes. Stanko could be one to watch as an option to help lock down the pitch as an alternative to Medunjanin. He doesn’t exhibit the superior passing of Medunjanin, but FC Cincinnati could use a bulldog in front of the backline to make tactical fouls and clog passing lanes.

A surprise omission to the starting XI, the designated player came on for Regattin. In 27 minutes of play, he only completed four passes, and his only shot was blocked.

A forgettable performance on a night we’d all like to forget. Alashe completed 5 passes, all of which were regressive. He did bring some physicality, which was nice to see.

All FC Cincinnati players, coaches and staff have tested negative for coronavirus.