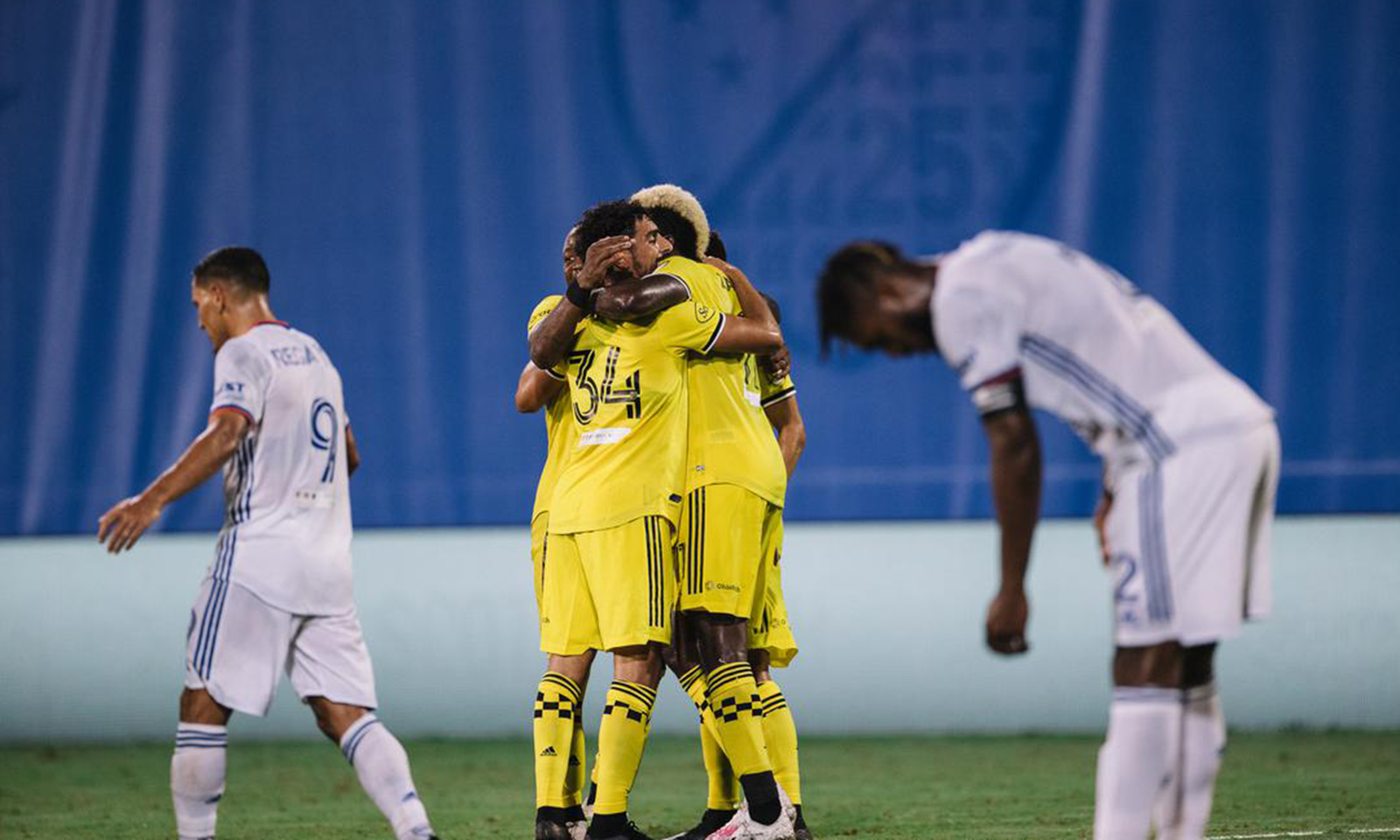 FC Cincinnati began the Jaap Stam era and group play in the MLS is Back Tournament with a 4-0 loss Saturday to Columbus Crew SC in a Hell is Real Derby match.

On a night many FC Cincinnati fans would like to forget, the Orange and Blue lost 4-0 Saturday to rivals Columbus Crew SC in a Hell is Real Derby to start group play in the MLS is Back Tournament. Even prior to the start of the match, the situation was unusual. Inclement weather delayed the start time to 11:20 p.m.

The match started relatively well for FCC. Kekuta Manneh certainly flexed his muscles as an attacking player with multiple interesting runs into the box. Two chances, in particular, looked promising from him. In one, Siem de Jong, in his first appearance for the club, played him a ball into the middle of the box. The other was a run from the outside corner and a shot to the near post. Both of these chances showed FCC was initially trying to play up to the competition. The final noteworthy action from the FCC attack was Adrien Regattin getting into the box with a clear-cut chance until Vito Wormgoor appeared to hurt himself and went down. Regattin, in turn, played the ball out for a goal kick to make sure Wormgoor got immediate medical attention even though he had a clear sight of goal.

After those three chances, however, everything turned in Columbus’ favor. The Crew easily ran through the FCC defense, especially on the right side, FCC’s left, much like last season’s match. Then Frankie Amaya committed a foul just outside of the box. Just like that, the Crew were up 1-0 thanks to a Lucas Zelarayán free kick goal going off the right post and into the net in the 27th minute.

Things didn’t get better from there, as FCC’s defense started looking even more like the swiss cheese that it is known to be. Only three minutes after the Zelarayán masterclass, Gyasi Zardes entered the score sheet. Younes Mokhtar held the ball, and Zardes made a run behind the FCC defense where basically nobody even noticed him. This disaster class from the Orange and Blue defense wasn’t the last of the night, unfortunately.

Columbus continued to attack the FCC backline with runs and passing it could only dream of. Following the halftime break, Columbus continued that onslaught on the defense, this time getting into its final third. Zelarayán acquired the ball after a header and played the ball into Zardes, who was running in between two FCC defenders. He put his second goal of the day into the net in the 49th minute.

At this point, the FCC defense has basically given up, allowing Columbus to pass without much attempt to close down any shot. That was fully shown in the final goal, with three passes almost inside the box that FCC paid no mind to until Mokhtar made the back of the net fly with the fourth goal of the night in the 60th minute.

While the game was most certainly over, Columbus continued its attack with multiple chances that almost made its way to the back of the net. However, thankfully, the match ended 30 minutes later with the scoreline looking like FCC gave up halfway through instead of the whole way through.

“Well I can understand because I’ve been in these situations myself as well as a player,” said Jaap Stam in a club press release after his first game as FC Cincinnati coach. “You know when things are not always going how you want them to be – and it’s difficult – and then when you’re conceding, well, there’s a lot of disappointment … You know I’ve played games myself as well when you’re 3-0 up, and then within six minutes you can concede three goals and – that’s even with the best teams in Europe. And that’s what I mean before, you need to stay positive, and you need to react in a certain way, you’re a professional. I think all the players are willing to do that, you know, they’re willing to work very hard for it. In a way, I can understand that there’s disappointment, but we need to find that switch that even when there’s disappointment, we can turn that around and we were willing to go for that.”

Overall, FCC had a couple of chances but none to show any changes the team may have made compared to last season. There were some runs into the box from the front attackers, but nothing really to write home about.

This may be the first match for Stam, and there was a definite style he wanted to play, but the roster isn’t there to play that style yet. This was seen especially in the backline and its ineptitude at playing from the back. Kendall Waston is not a center-back for this style of play, and something needs to change if Stam wants to continue this kind of play.