FC Cincinnati discovered just how hot the Hell is Real Derby could be, suffering a 4-0 defeat to the Columbs Crew late on Saturday into Sunday morning. The Crew took a 2-0 lead before the half and added two more after the break. Here’s a look at how the goals happened.

Lucas Zelarayán opened the scoring with a wonderful free kick in the 27th minute on what some are calling the goal of the tournament so far. The buildup to the foul that created the free-kick opportunity is what we’ll break down here. 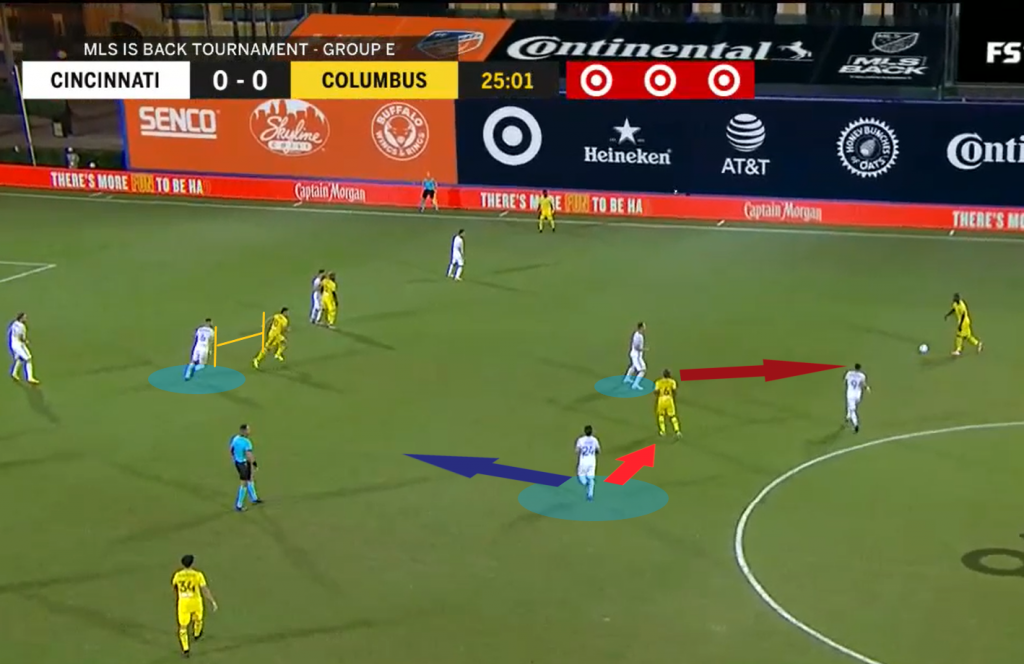 The image above shows the Columbus right center back carrying the ball forward into the front of the middle third without pressure. The midfield triangle for FC Cincinnati is highlighted in blue. You can see that it is set up in a pressing shape, with the triangle inverted to put Frankie Amaya alongside Siem de Jong. Had Amaya been dropped into a more defensive position (blue arrow), much of the danger could have been avoided. However, he continued to press toward de Jong and Darlington Nagbe, perhaps expecting de Jong to press the ball (red arrows).

You can see that Zelarayán is checking into space, and Haris Medunjanin is already lagging behind. 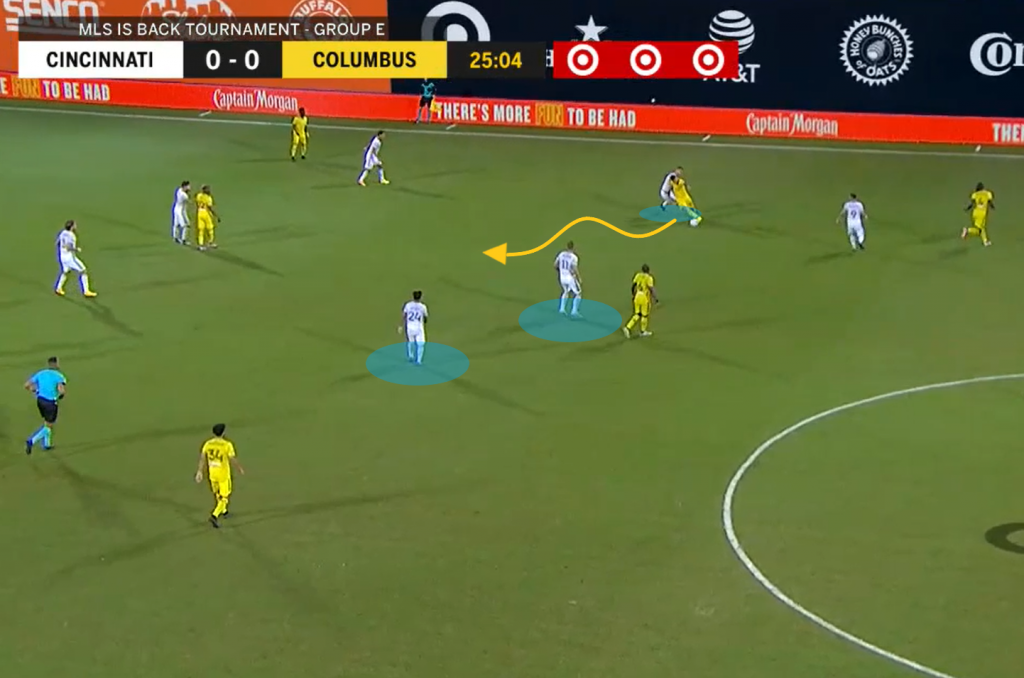 Because of the space he created from Medunjanin, Zelarayán can turn and roll past the big Bosnian. With de Jong still pressed on Nagbe, and Amaya not dropped to cover, he has a lot of space in which to dribble. 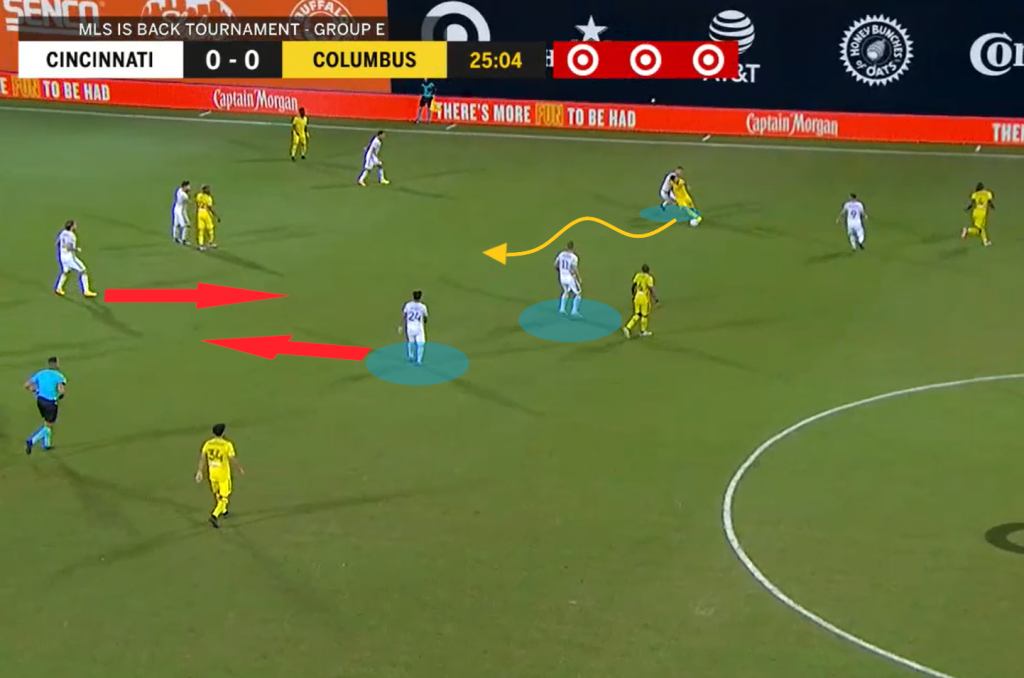 At this point, with Amaya already out of position, all is not lost. The correct mode of action would be for Tom Pettersson to step into the space left by the young midfielder in order to pressure the ball and for Amaya to drop hard to cover the space vacated by Pettersson (red arrows). 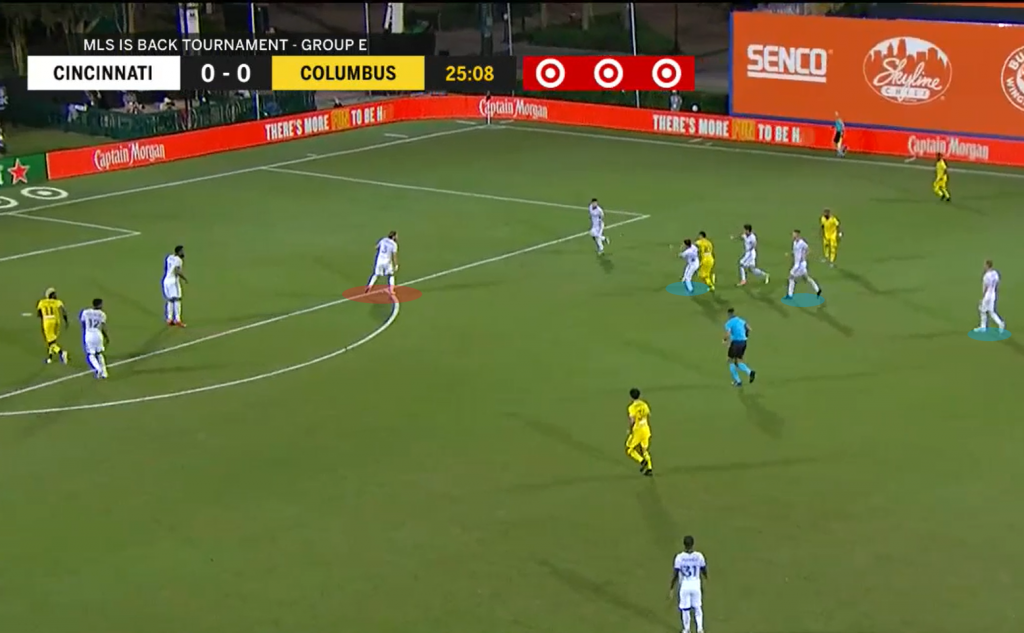 Instead, Amaya attempts to recover and challenge Zelarayán while Petterson drops into a useless position along the top of the 18-yard box, not close enough to stop the ball and not dropped in enough to allow Kendall Waston to sag back onto Gyasi Zardes. Amaya commits the foul in a very dangerous position, and Zelarayán strikes with an excellent free kick. 1-0 Columbus. 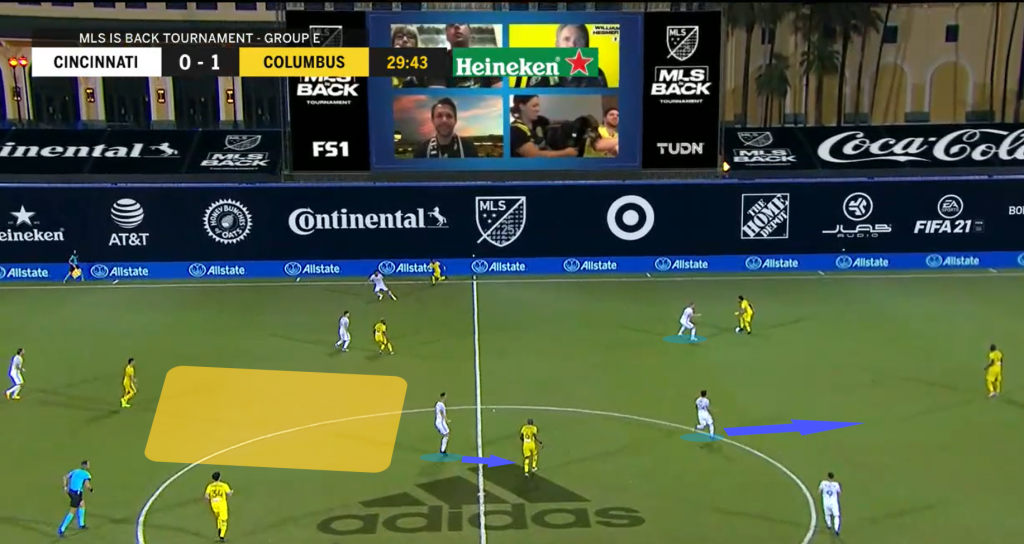 The buildup to the second goal began in the Columbus half of the field. Once again the FCC midfield (blue highlights) was set up in an inverted triangle, pressing formation. Pettersson pushed Medunjanin forward to mark Nagbe, and subsequently, Medunjanin pushed Amaya forward onto the Columbus right center back. This showed good communication but left a large gap between the back line and the midfield for Zelarayán to exploit. 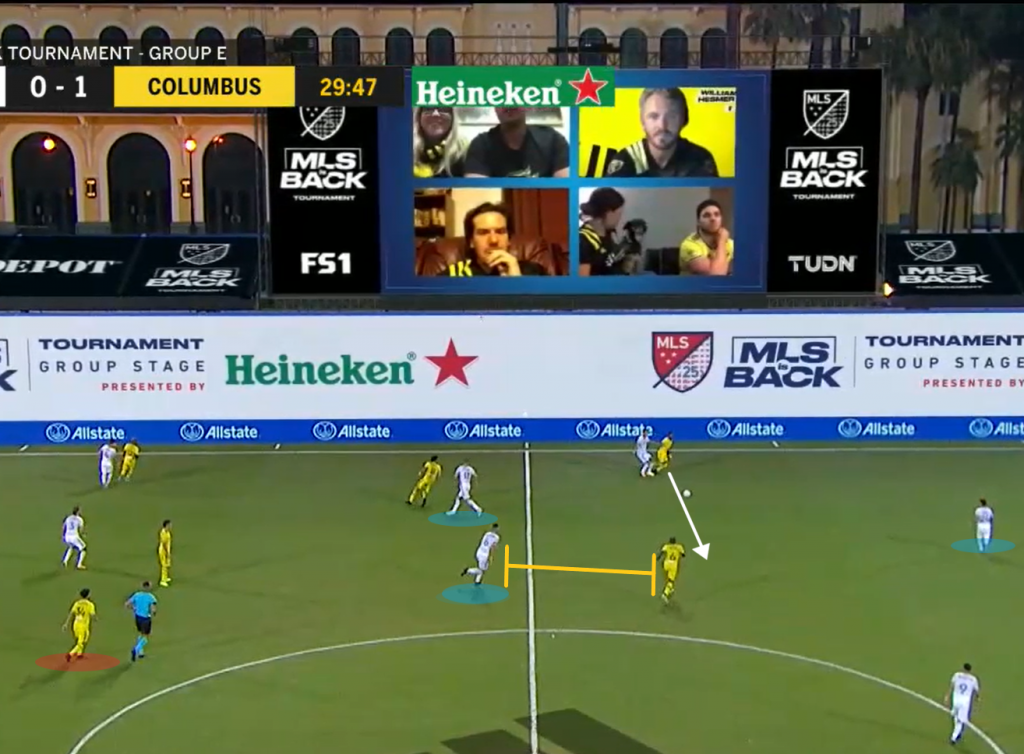 Nagbe easily creates space from Medunjanin with a darting check towards the ball and receives the pass. Medunjanin aggressively presses the ball. Mokhtar (red highlight) continues to shift from his left-wing position toward the midfield, creating an overload in the space vacated by the pressing FCC midfielders. 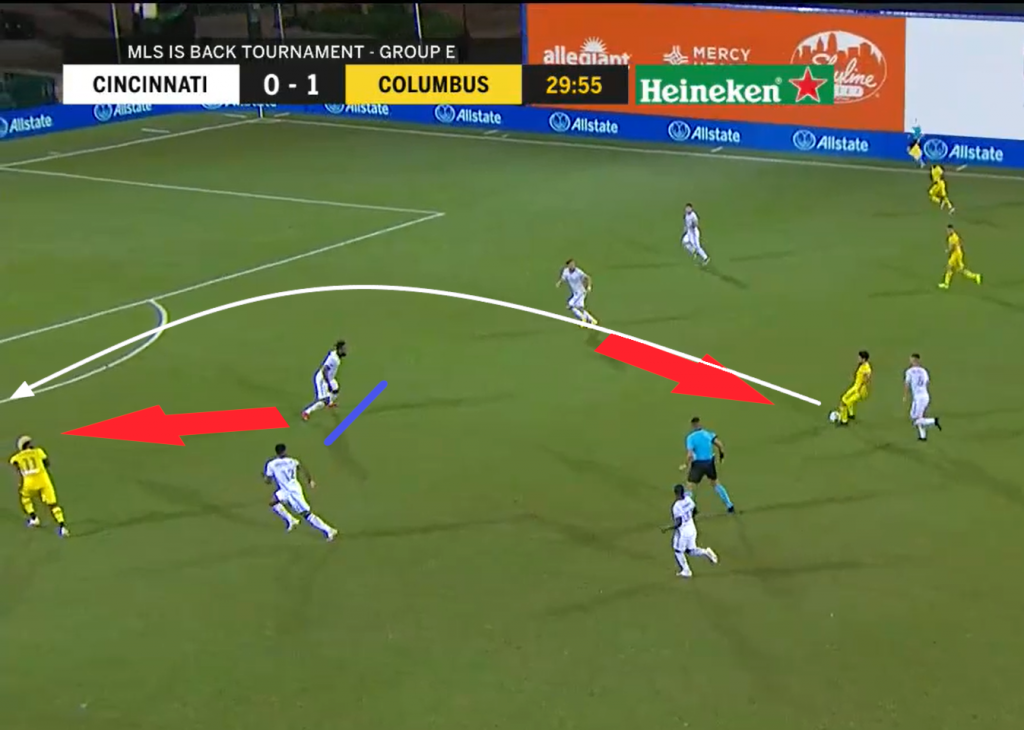 Nagbe rides the challenge of Medunjanin and finds Mokhtar in space. Mokhtar dribbles forward without pressure. The correct action here would be for Pettersson to step to pressure the ball and Waston to drop and cover the Columbus center forward.

Instead, Pettersson continues to drop, and Waston neither steps to pressure nor drops to cover. Instead he stops, allowing Mokhtar to easily slot the ball past the FCC skipper, and Zardes cooly finished to the far post. 2-0 Columbus.

FC Cincinnati came out of halftime with a bit of a different look. Andrew Gutman had come on for Greg Garza, and Amaya had assumed the deepest role in the FCC midfield. However, this was not enough to prevent the Crew from scoring early. 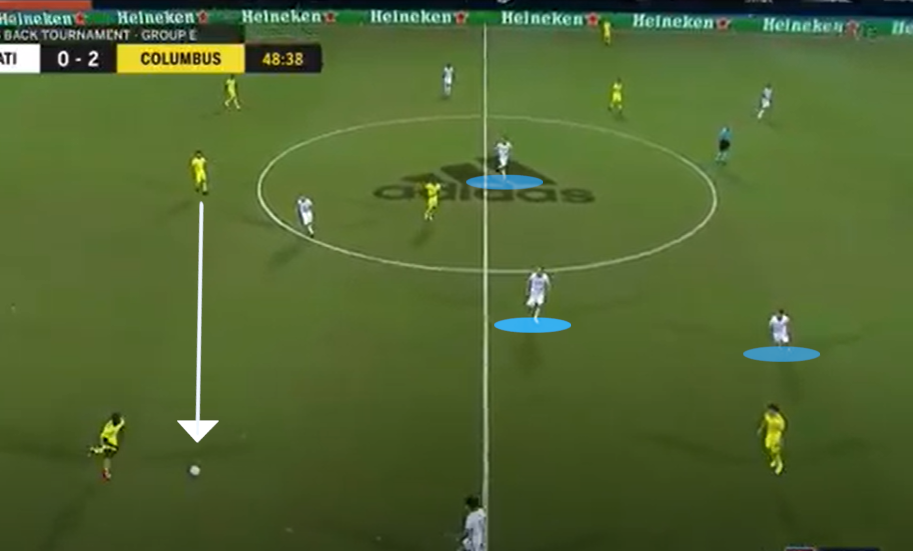 Though Amaya was now dropped deeper, the inverted triangle press stayed part of FCC’s game plan (blue highlights). As Columbus moved the ball to the FCC left, the midfield was set up well to squeeze the opponents and win the ball back. Yuya Kubo was in position to press the right-back, Amaya was closing quickly on Zelarayán, and de Jong was well positioned to cover Kubo. 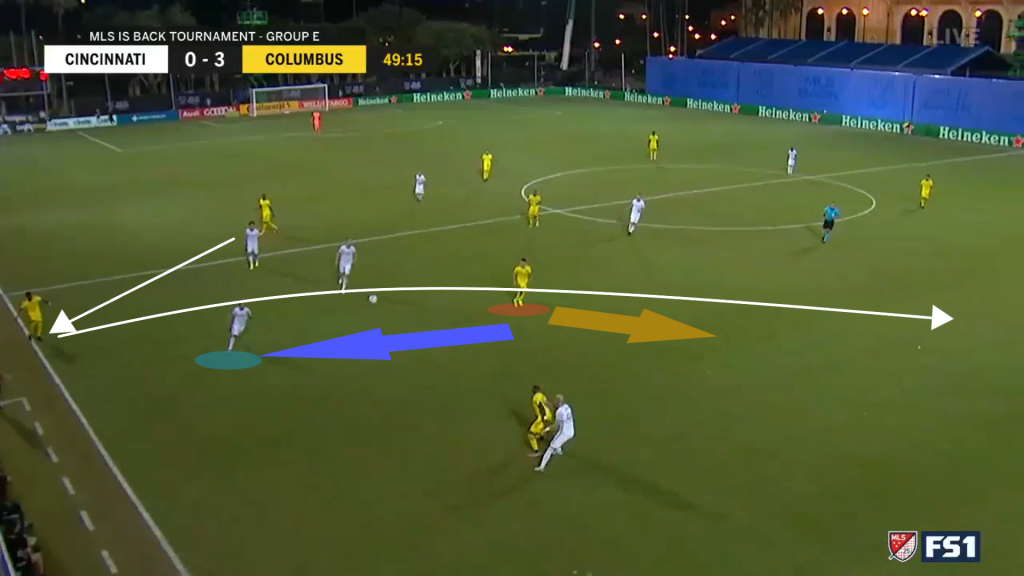 However, as the ball moved to Harrison Afful, the Columbus right back, Kubo was unable to make the challenge. Instead of de Jong quickly moving to provide cover, Amaya left Zelarayán to close the ball down. However, before he could get close, Afful drove a ball into Zardes, who was being tightly marked by Waston. 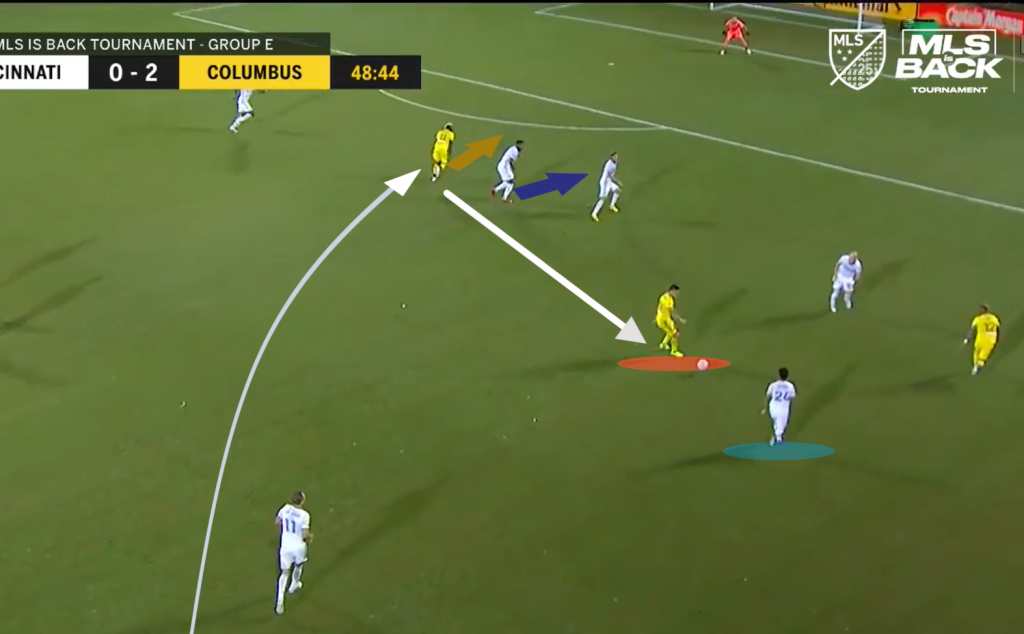 Because he had moved out of position, Amaya was now left badly behind the play. Zardes had no need of bringing the ball under control and instead was content to simply knock it down for the wide-open Zelarayán. Zardes then turned to make a run into the box, and Waston didn’t bother to follow the American. 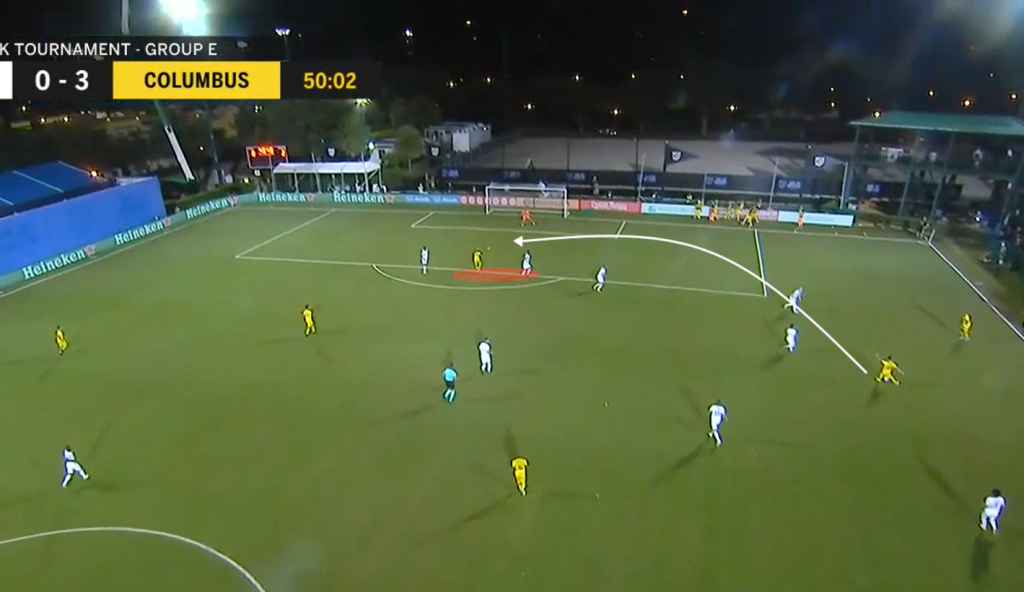 Zelarayán uses his space to discard Amaya tracking back and then picks out Zardes with a beautiful ball into the box. The look above shows just how much space he had to drop the ball into. We can’t know whether FC Cincinnati coach Jaap Stam prefers right back Saad Abdul-Salaam to pick up the center forward in this case. However, the typical scenario would leave Waston in charge of the opponent’s center forward, as there is no one else in the box to mark.

If the third Columbus goal was the nail in the coffin, the fourth was the salt in the wound. Once again, we see that the FC  Cincinnati inverted midfield triangle is partially to blame. 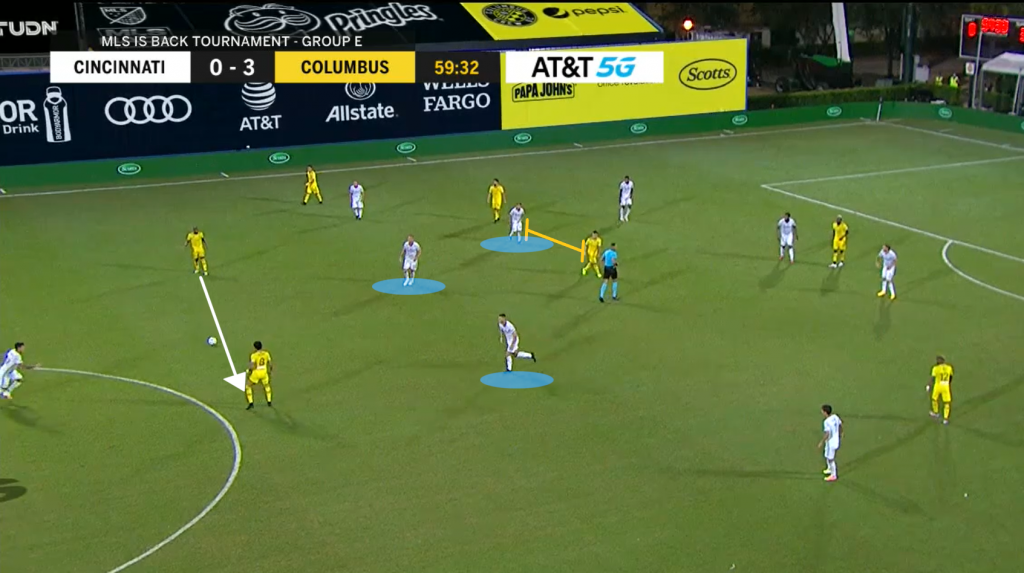 As the Crew shift the ball from FCC right toward the center, the midfield triangle (blue highlights) shifts. Because of the inverted triangle, Medunjanin moves to pressure the ball, and Amaya is left to try to recover in space and catch up to Zelarayán. 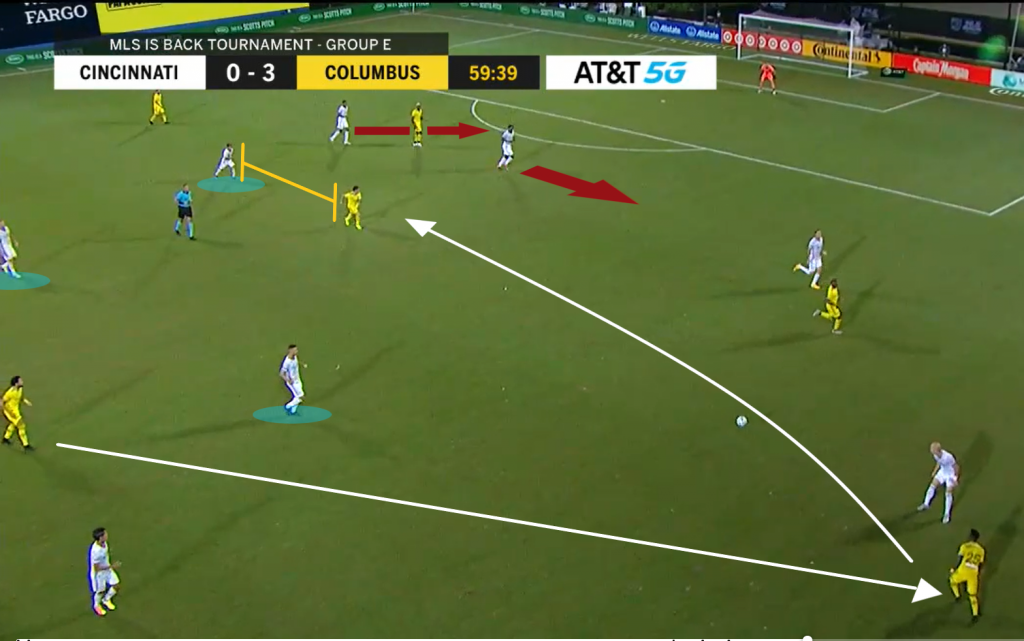 The ball shifts all the way right to Afful, and Zelarayán continues to exploit the space left by the inverted triangle. The Columbus right back easily finds the Argentine playmaker. Amaya is working hard to close down the space, but more importantly the FCC back line is not doing the same. Here, Waston and Abdul-Salaam should both be shifting toward the left side so as to close the gaps along the back line (red arrows). 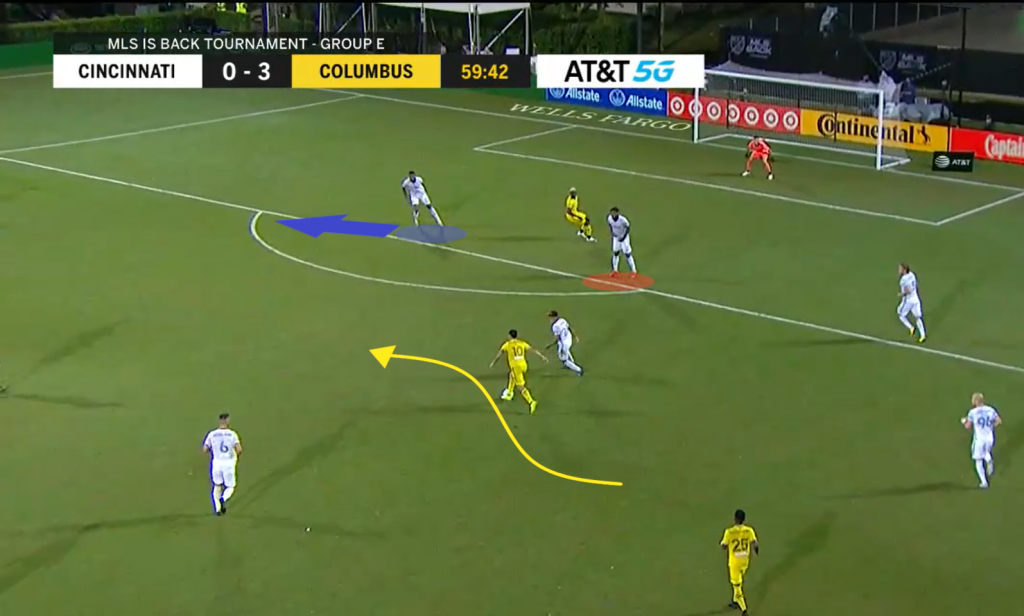 As Zelarayán collects the ball and dribbles back toward the FCC right, Abdul-Salaam shifts back toward the right where Mokhtar is waiting. Because of the initial lack of defensive shift, the backline is disjointed and Waston (red highlight) is left in no man’s land. 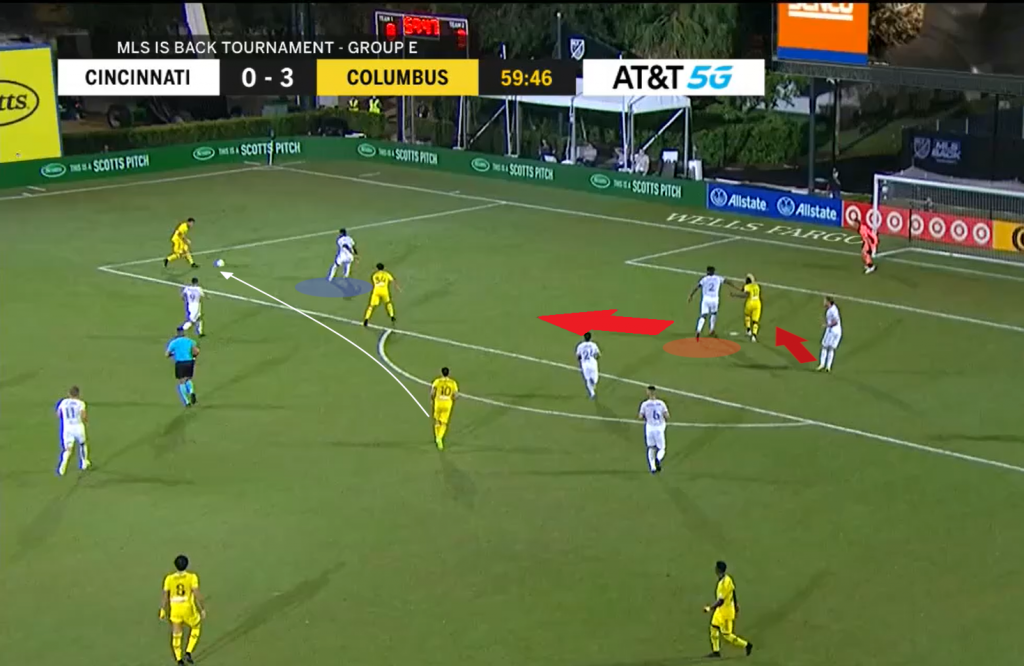 As Zelarayán shifts the ball out to left full-back Jiménez, Waston turns and attempts to recover onto Zardes. However, with Jiménez running free, Abdul-Salaam is forced to leave Mokhtar to pressure. Here, Waston should shift onto Mokhtar, and Petterson should drop onto Zardes. Neither of these things happened, and Jiménez easily finds Mokhtar wide open inside the FC Cincinnati penalty area. 4-0 Columbus

Much has been made of the choice to start both de Jong and Medunjanin, two immobile players, in the same midfield. This choice can work, but it does make for a very slim margin for error. Compounding this by employing the tactic of a midfield press and inverting the triangle means that any mistake will be met with a ton of space behind the midfield and in front of the backline for the opponent to exploit. Let’s hope Stam has learned enough from this loss to start a different combination of midfielders or dispense with the midfield press, or even both.

Tune into the latest Talking Tactics with Coach Gough Podcast as Coach breaks down the last match and interviews special guest D.J. Switzer! Look for our new podcast on your favorite podcast network each week!