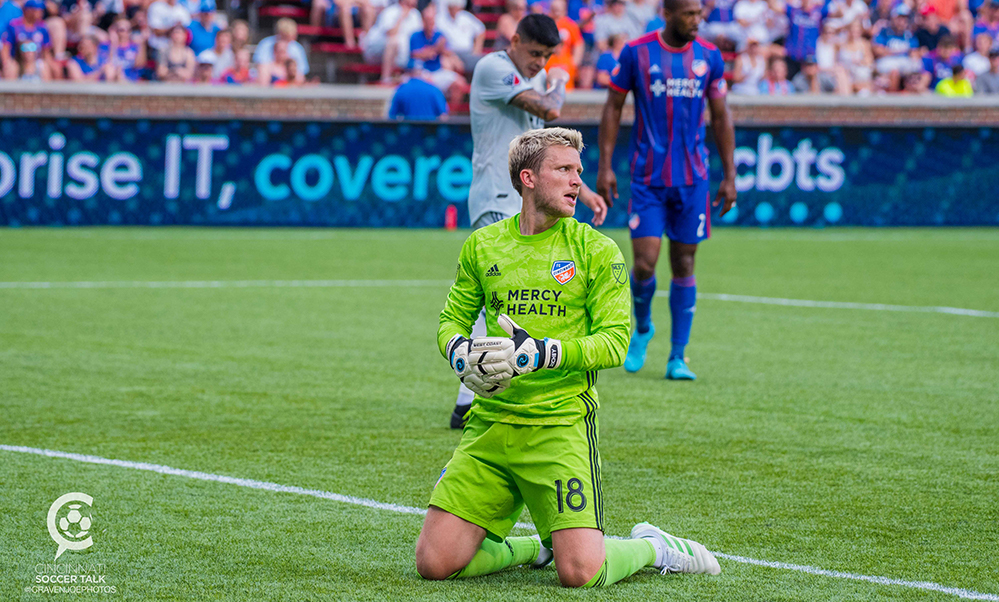 FC Cincinnati returned to training Monday after an off day, and both Spencer Richey and Jaap Stam spoke about new ideas and the small time left until games resume.

FC Cincinnati is only a few short weeks away from returning to playing matches, so each training session with new head coach Jaap Stam will be paramount to getting every player onboard. FCC returned to training Monday after a day’s rest, which caused the day’s training session to be lighter than normal days, said Stam after Monday’s session, with some small games and tactical sessions.

With the small number of sessions remaining until FC Cincinnati leaves for the MLS is Back Tournament, the club wants to get up to speed on the style Stam wants to use. FCC goalkeeper Spencer Richey said he definitely has.

“I don’t think he’s gotten into the meat of a lot of that yet, but he certainly has a style of play that he likes, both offensively and defensively,” Richey said in an interview provided by the club on Monday. “I think something that I’ve personally noticed straight away is the intensity in which he wants to be on the defensive side of the ball and we want to be a team that presses and squeezes and imposes ourselves on the opponent, so that’s something I noticed straight away and I think when done correctly, it’s extremely difficult to deal with, so it’ll be fun to watch it progress.”

Stam echoed what Richey spoke about in terms of implementing new ideas into the team and their style of play.

“Like I said last week as well, we only have several weeks and now it’s only three weeks before the first game, so every day we pay attention to the way of playing, that means offensively but also defensively,” Stam said on Monday in an interview provided by the club. “We need to sort some things out, so we’re not going to like conceding a lot of goals, as little as possible of course, but having that ball is very important for us to have a lot of possession and hopefully going forward and attack and create a lot of opportunities and eventually, hopefully, scoring goals as well.”

Richey also said Stam’s presence with the team was different, and he said the focus and seriousness were immediately there, and that the new voices for the squad are refreshing to hear.

Additionally, he said Stam has been involved with the goalkeepers quite extensively.

“(Goalkeeper coach) Jack (Stern) and him, I think, speak a decent amount, how they want us to play, how they want us to be involved in the buildup, defensively, some positioning stuff, different characteristics that he likes in his goalkeepers. He’s a center-back, obviously, throughout his career, so I think he knows what he wants and what he doesn’t want from his goalkeepers, so he’s definitely been communicative to us about that.”

Richey said he got butterflies when he found out the team’s group, even though a couple of them were rematches.

“Two teams that obviously beat us earlier in the year, and then Columbus is always a big game and one that I haven’t got to play in yet because I was hurt for both of those last year,” Richey said. “I know guys are looking forward to it.”