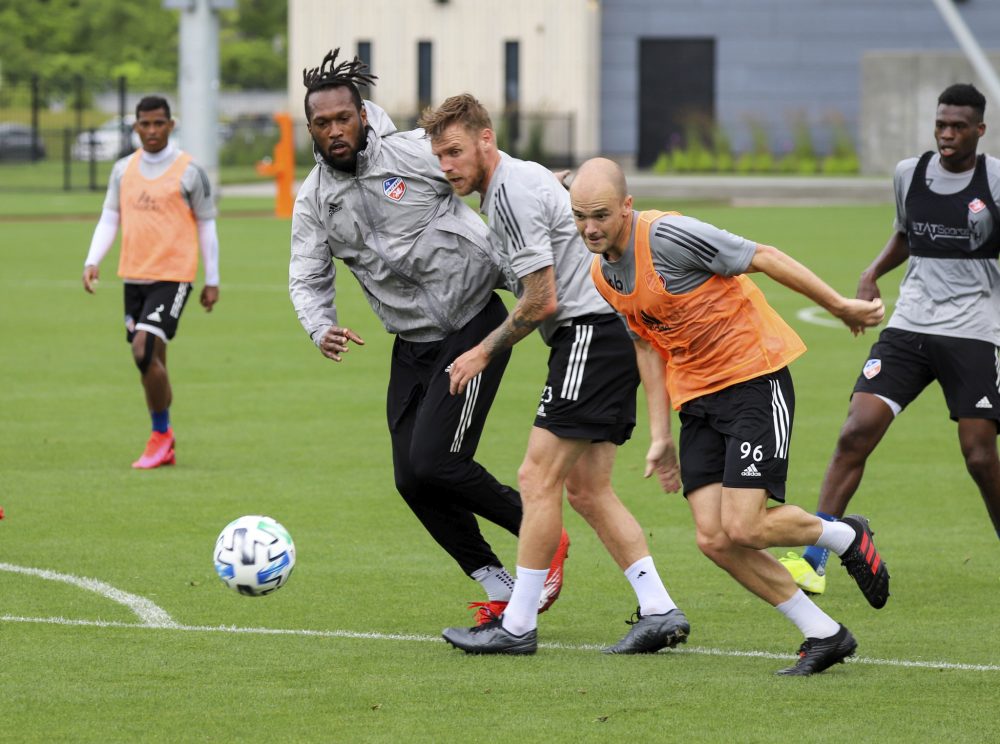 The heat Tuesday at the Mercy Health Training Center did not stop FC Cincinnati’s excited spirit on the pitch in preparation for the MLS is Back Tournament.

It was a hot day at Mercy Health Traning Center as soaked players kicked the ball around. The heat did not stop the excited spirit on the field.

When asked about the upcoming tournament Tuesday in a team-provided interview, Caleb Stanko said, “It’s awesome, I mean just having to be stuck inside for so long and then finally getting to be back with the guys doing just running and small possession drills and finally doing team sessions. I’m so excited to be able to play in competitions, and I’m excited for the tournament.”

We have heard from players like Spencer Richey on new FC Cincinnati coach Japp Stam’s style. In theory, Stam is training off the same 4-3-3 formation that FC Cincinnati started the season with, but the small differences are where the adjustments come in. Joseph-Claude indicated the transition is going well.

“It hasn’t been too much of an adjustment,” Gyau said in the team-provided interview on Tuesday. “I’ve played a 4-3-3 before. It is like reintroducing and implementing things he wants.

“The training sessions have been really good, very structured, very clear, he lets us know exactly what he wants. I think we have executed well so far, everyone is learning. So far it’s been really good.”

Stanko also spoke highly of the new coach. When asked what he thinks so far, he said it’s “very exciting, very disciplined, high level. He expects a lot of his players and the standard is really high.”

There seems to be a pattern coming out of training lately. Players are obviously excited to prove their worth under new leadership and possibly earn a spot on the pitch with fresh eyes on them. Putting aside the competitive side, players also do seem to have a respect for Stam and what he accomplished in his career. “Every time I’m able to step on the field and learn from him is a great opportunity,” said Stanko.

FC Cincinnati plans to travel down to Orlando on Monday to prepare for the tournament. We will continue to update with coverage as the club moves closer to the tournament. The match dates are currently not available.