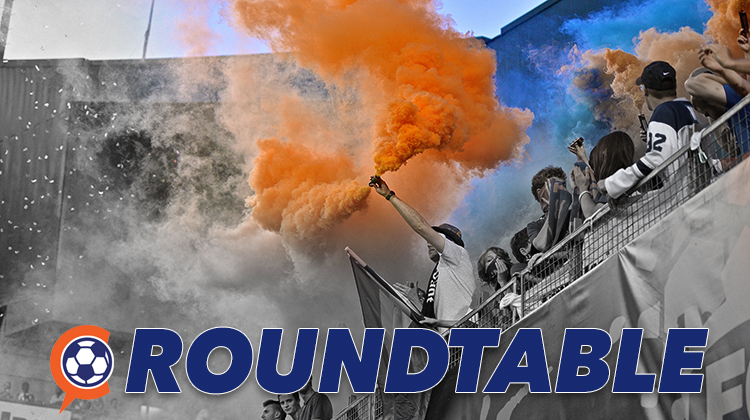 Should FC Cincinnati sign the buy option on Jürgen Locadia at 10 Million after two games or let his loan run out?

Sometimes a topic needs to be revisited. Cincinnati Soccer Talk has talked about the value of Jürgen Locadia before via podcast and on social media. Expect Locadia to remain a hot topic the longer FC Cincinnati heads unresolved toward the end of his loan from Brighton & Hove Albion F.C. on July 5. With Major League Soccer resuming play, does FC Cincinnati enter the tournament with its star Designated Player? The loan as it currently stands requires FC Cincinnati to hand over $10 million in cash to Brighton to take over his contract rights. As you can imagine, this topic has been a source of internal debate among the CST staff. When that happens, we like to give our staff a chance to lay out their best short argument in the form of a roundtable.

Q:  Should FC Cincinnati sign the buy option on Jürgen Locadia at $10 million after two games or let his loan run out? If negotiations are possible, what is your max offer to Brighton?

Financially, I am not sure paying $10 million for a player sight unseen by a new coach is a wise move. A possible economic downturn on the way makes it seem like even less of a necessary item to carry on the books. That being said, FC Cincinnati fans need a win. Hell, FC Cincinnati needs a win and Locadia is one of the more promising players in the league. How long will it take for FCC to replace Loca? Will fans continue to watch L’s pile up as they enter a brand new stadium? I have a lot of questions and honestly little trust as the club enters rebuild after rebuild. So even though it isn’t a wise financial decision, I would take a rare bite of FC Cincinnati stability at the cost of $10 million. As for the second part of the question, It would be wise for FCC and Brighton to come to new terms as neither team has any idea what the future holds. If the player market takes a nosedive, Brighton could get a lot less and face a player less willing to move again. I think $6 to 7 million would allow FC Cincinnati and Brighton to both walk away from the deal looking smart.

Hey, remember that $5,000 December cruise you put a $100 down payment on in January? Now the same cruise costs $4,000. Would you just eat the $100 and pay the $4,000 for a total of $4,100, or would you happily pay the $5,000? That’s my point with Locadia, I love the guy and I think he can fit into the Nijkamp system. However, this is a business and it’s in FCC’s best interest to try and renegotiate the deal in the current soccer environment. Is it risky? Sure. But is it the right thing to do? Hell yes. The best soccer clubs work the best deals and FCC pre-Nijkamp did not do that well. I expect a lower transfer fee to be worked out, if not we move on.

My answer is totally dependent on the Modou Barrow rumors. Barrow is an extremely fast, goal scoring left wing. If he is signed, I would cut Locadia loose and play a front three of (left to right) Barrow, Kubo, Regattin. Then allow the front three to remain fluid, with all three players finding themselves on all parts of the field throughout the flow of the game. Lastly, defensively Kubo would drop into a No. 10 sort of position, forming a diamond with the other midfielders, and all counter attacks would go through the wings instead of the center forward. If Barrow isn’t signed, FCC should keep Locadia or buy a direct replacement. I think negotiating with Brighton down from the $10 million mark should be possible, especially if Locadia wants to be here. However, if no replacement is available and negotiations stall, I’d pay the $10m

Our staff is debating the #FCCincy Locadia buyout while we wait for today's #MLSisBack draw. (Will release those thoughts soon). We want to know what you think in the current COVID climate.

I can’t believe we are having this conversation. These loan deals with options to buy are common in MLS. The intention is always to buy. The initial loan is like a safety net, in case the player washes up or doesn’t fit in with the team. When this deal was signed, FCC planned to pay up come July. So do it! He was worth the $10m to them in February, and he’s worth it now. If they turn away from Locadia, the team would need to immediately turn around and find another DP quality striker who fits FCC’s style of play at a more affordable cost. If that sounds hard, it’s because it is. I remember how excited we all were when Locadia came on loan four months ago. He’s still the same player, with the same upside and potential, even if we’ve only seen him play 116 minutes. This is an easy decision for me. But it is easy for me to say, as I’m ignorant of exactly how damaging the pandemic has been and will be to ownership’s finances. If they no longer can afford to buy Locadia’s contract at that price, then I can’t blame them. But I sure hope that isn’t the case.

I’m sorry, but there is no way that FC Cincinnati should execute the $10 million purchase of Jurgen Locadia. The market is clearly in favor of the buyers at the moment, and FC Cincinnati is uniquely positioned to strike. La Liga boss Javier Tebas is estimating that this summer’s transfer fees could amount to 25% of the 2019 summer period. Most teams are not going to spend, and the ones who have the cash can strike at better deals. South American clubs have built their business models by selling to European clubs, Spain in particular. With the lack of money being spent, they are reportedly turning to MLS to offload some of its budding stars. With pay cuts and reduce transfer spending by European clubs for players likely to come in 2020-21, a high paying MLS club will look extremely attractive to players.  I think Locadia is a very good player, but his value was set in the previous market. FC Cincy will absolutely have a better chance at landing a player of his caliber or better at a lower value or several younger players with high ceilings. Pass on Locadia and aim to spend your money on several players who can increase in value and reap greater benefits for FC Cincinnati.

Remember when we were complaining about not having a forward that could take over a game? Pepperidge Farm remembers. Well, I remember too, and I don’t want to go back to that day. I understand we’ve only seen Locadia for just about 100 minutes but I think I’ve seen enough to tell that he’s the perfect forward for the team. A young, high-quality player that actually wants to be in Cincinnati. That’s a hell of a combo and not one you can just find anywhere, especially that last part. There was another player we had last season with great potential but didn’t want to be here. It’s safe to say players with all three of those aspects are hard to find, and also not ones I want to let go when we have the chance to scoop them up long-term. I’m not very well-versed in the financial aspects of the market, and how a purchase like this is different compared to what it might have been pre-pandemic. However, FCC needs to be able to compete with the other teams, and to do that, they need to score goals. FCC needs to push that big red purchase button now before Brighton decides to take Locadia elsewhere.

These are unprecedented times in our world and for this club. For the first time in our short MLS history, FC Cincinnati has a striker who can score goals. Yes, I understand we have only seen Locadia for 100 or so minutes but this is a player who can seemingly take over a game and not to mention, the guy wants to be here. As Cincinnati sports fans, we have been conditioned to be let down. Not purchasing a player of his caliber to lead the attack would be a major disappointment. Saving the $10M and applying it elsewhere would be nice, but it’s also nice to score goals and Locadia can do that. I do expect Gerard Nijkamp to be able to work out a lesser transfer fee for him, giving the club a chance to use the remainder of that money in bringing in more talent.

FC Cincinnati needs to keep Jurgen Locadia in the Orange and Blue for the foreseeable future, it’s just that simple. From a business perspective, it makes complete sense that the club would try to renegotiate the purchase option at the end of the loan. However, FCC must understand the risks involved with trying to haggle with the price of Locadia. If FCC prices Locadia too low, the club risks the chance of Brighton not countering and potentially making Locadia upset since the club that is trying to purchase him does not believe he is as valuable. Trust me, it happens to me all the time in FIFA 20. Since FC Cincinnati has joined MLS, it has struggled to find its marquee player. When I bought my first MLS FC Cincinnati kit last year, I left the back blank because I didn’t feel any of the players were really worthy of recognition. Turns out I made the right decision. Now they have an opportunity to bring in said player, and it is in the club’s best interest to make sure it does not waste this opportunity.