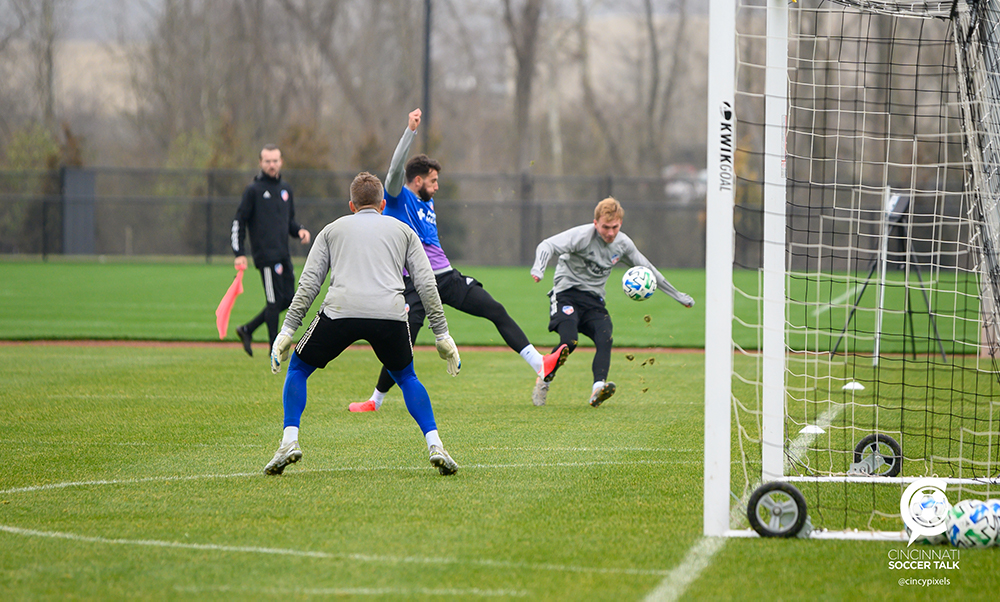 In the wake of MLS’ announcement on Monday that players are permitted to return to their respective training facilities for voluntary workouts this week, Atlanta United, Inter Miami, Houston Dynamo, Orlando City and Sporting Kansas City were the first clubs to allow that to happen.

FC Cincinnati interim manager Yoann Damet, speaking on video conference call with media members on Wednesday, said the club has put together a task force to formulate its plans in adherence with local public health and government regulations and protocols provided by the league.

Damet said players could return to Mercy Health Training Center later this week or next.

“We’re still waiting on some answers from the local authorities, so it’s difficult to give a time and date,” Damet said. “The task force has been together a couple of days now, so the club will be able to get back to you soon with some details on that. The league has to approve any protocol.”

MLS announced on Monday that players could return to training, but only on the outdoor fields and in accordance with detailed health and safety protocols and without conflict with local or state public health policies.

Ohio’s stay-at-home order remains in effect until May 29, although some businesses are beginning to reopen.

“I think that human relationship, even with social distancing, is a big step forward for all of us,” Damet said.

When FCC players do return, it will be their first training sessions in Milford since the league instituted a training moratorium following the suspension of match play on March 12 due to COVID-19.

MLS matches still are suspended until at least June 8, while some European leagues are pondering a restart in empty stadiums and neutral sites. The Bundesliga is set to begin on May 15 after receiving government approval.

“The situation is difficult,” Damet said. “Safety of everyone is the No. 1 priority and has always been. The priority was to provide the players with a program to stay in shape as much as they can. Now having access to the facilities for the workouts of the players, it’s a great thing. There are people working behind the scenes to make sure the players are coming back to a safe environment.”

Throughout the hiatus, Damet and technical staff have leveraged technology to continue their learning process. On Wednesday afternoon, Damet had a video session with Brandon Vazquez which focused on the center forward position and where he could improve. According to the players, this approach has worked well over the past several weeks, but it’s not the same as being on the pitch.

“We’re trying to be creative,” Damet said. “But I’m not going to lie, it’s difficult to coach from your home.”

According to a statement from MLS, by allowing players, on a voluntary basis, to utilize team-operated fields for individual workouts, clubs will be able to provide a controlled environment that ensures adherence to safety protocols and social distancing measures for players and staff.

The individual player workout protocol prohibits access to club facilities including but not limited to locker rooms, team gyms, and team training rooms. Team gyms and training rooms may still only be accessed by players receiving post-operative and rehabilitation treatment, as directed by the club’s chief medical officer.

Prior to initiating any individual player workouts, every team must submit to MLS a club-specific plan that outlines how the team will implement those standards outlined in the release, including:

• Restricting training facility access to essential staff only, with specific staff listed in the plan.

• Sanitization and disinfection plans for all training equipment and spaces, including disinfection of any equipment used by players (balls, cones, goals) between every session.

• Completion of a Standard Screening Assessment survey by each player prior to every arrival at the training site and temperature checks upon arrival at the facility.

• Staff use of the appropriate personal protective equipment throughout training, while also maintaining a minimum distance of 10 feet from players at all times.

• Hand washing and disinfectant stations for required use before and after individual workouts.

• Clubs will have the use of the outdoor fields at their training facility, divided into a maximum of four quadrants per field. A maximum of one player per quadrant may participate per training session with no equipment sharing or playing (passing, shooting) between players.

• An Emergency Action Plan for all COVID-19 related issues.

All plans must be reviewed and approved by the club’s medical staff and local infectious disease experts before being submitted to MLS. Every club must designate a member of the staff to oversee adherence, and each club will also be responsible for confirming communication of these rules to players and staff.

“It’s a big step forward for the players to have access to the training facilities,” Damet said. “Everyone is still assessing what’s happening in the world during this crisis. For now, we are tied in to the decision made by the authorities. We want to go back. We want to play football. (But) the conditions have to be there to make it safe for everyone.”