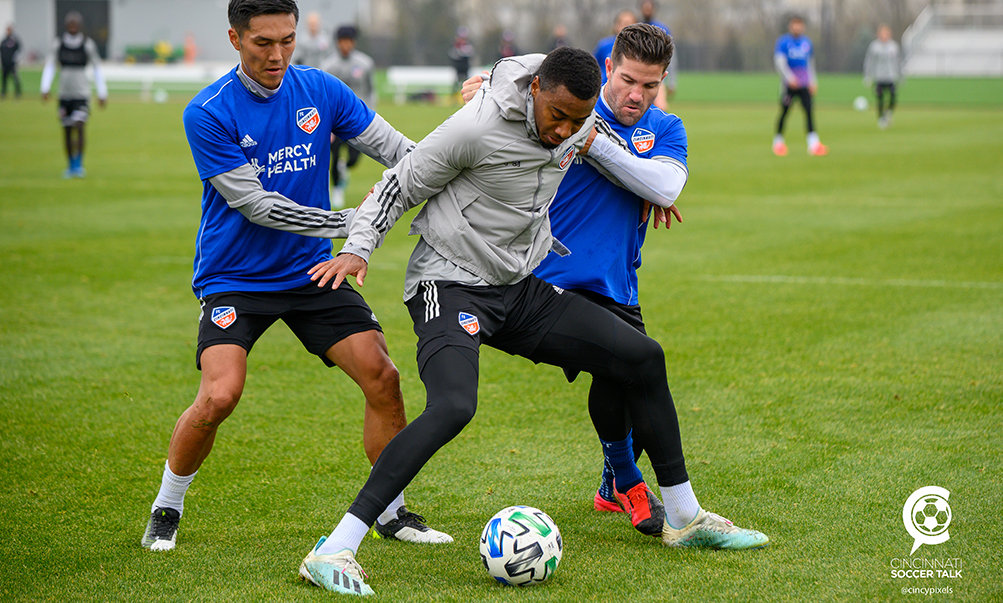 FC Cincinnati interim coach Yoann Damet has scheduled one-on-one video meetings to give players items to study while the 2020 MLS season is in suspension because of COVID-19.

On Monday, FC Cincinnati forward Brandon Vazquez has a one-on-one meeting with interim manager Yoann Damet to review video of the first two matches of the season and assess the 21-year-old’s performance.

Only they won’t be sitting in a room at Mercy Health Training Center, or anywhere near that facility. In today’s unprecedented working environment, Vazquez and Damet will be speaking with each other through a computer screen. And rather than being on the pitch with a ball at his feet, this will exclusively be a thinking exercise for Vazquez.

“We’re doing a screen share where he can show us exactly what movements we should be doing in certain situations,” said Vazquez, who under normal circumstances would’ve been preparing to face his old club Atlanta United on Sunday at Nippert Stadium. “It’s harder than not being there in person, but it’s doable. This is a time when we can get better at using video. It’s basically all we have.”

With no return date set for the MLS schedule and a shelter-in-place order active in the state of Ohio until at least May due to the COVID-19 pandemic, FCC’s players and the technical staff have had to get creative in order to make the most of their time apart.

What they’re discovering are better ways to do things. By leveraging the technology at their disposal, training has gone virtual. But with more time to digest the information and discuss areas for improvement, in some ways it’s more productive than being on the pitch.

During the season, or even the off-season when players are scattered and focused on other things, there is limited time to apply the focus needed to some areas of the game.

“During the season, we would speak about something one hour each week for four weeks. Now we can cover it in two weeks,” Damet said. “Being home gives us a lot of time to work on some side projects, which we still do during the season, but it’s hard to devote a lot of time. We can find solutions, find ideas. Right now is the best time to do this.”

There was a team-wide video chat recently where Damet, general manager Gerard Nijkamp and the technical staff laid out a plan for the players while MLS is on hiatus. While players continue to do strength and cardio training on their own with the direction of Gary Walker’s sports performance staff, each of them also will have one-on-one tactical sessions, using video and other tools to identify areas for improvement.

“I have a meeting with Yo (Damet) on Wednesday to go over some game clips to see what can be done better,” said defender Nick Hagglund. “The cool thing is that, even though we can’t get on the field together, as a team you want to be of one mind. I want to know what my right back’s doing, what my center mid’s doing, what my striker’s doing. On video, you can focus on different positions and make everybody know what’s supposed to happen.”

While Damet didn’t divulge specifics, there are also a lot of what he calls “side projects” happening at the moment. These are things related to style of play, team culture and of course, tactical and strategic things the club would like to implement with plenty of free time with which to do so.

There’s a lot of self-reflection from first-team players,” Damet said. “We’re having a lot of meetings about our long-term vision. There’s a lot of things we can do right now. We have identified a playing style. Now it’s how we implement that philosophy. How can we get better in this period? How can we collect information about other teams in the league? Just trying to maximize the time.”

Hagglund has contributed in other ways too. He’s widely considered to be the funniest player on the club and often the ring-leader when the players convene on WhatsApp or other social mediums. “Not the funniest,” Hagglund says of himself. “Maybe the most self-deprecating.”

Team bonding is an important part of the team’s efforts to somehow turn this downtime and the seriousness of the present situation into a positive.

“It’s going to be interesting to see how everyone comes out on the other side of this,” Hagglund said. “I hope it’s positive. That’s the goal. For us, it’s about what can we do right now. The future is unknown. It’s about what we can do in the present.”