FC Cincinnati’s midfield plan for Sunday’s loss against the Red Bulls had its pros and cons. Brad Gough examines both in this edition of Talking Tactics.

Losing 3-2 on the road, as FC Cincinnati did on Sunday, is not the worst way to begin a season —  but it’s not the best way either. Especially when the New York Red Bulls didn’t play particularly well and the match was there for the taking.

Interim coach Yoann Damet set up FC Cincinnati aggressively in an attempt to allow the three midfielders — Allan Cruz, Frankie Amaya and Haris Medunjanin — to have flexibility in controlling the tempo of the match. The plan appeared to be that, in possession, Amaya and Cruz would push forward into the gap behind the Red Bulls attacking midfielder. Greg Garza would get forward from his left back position (allowing Yuya Kubo to float centrally), and Mathieu Deplagne (highlighted) would become a third center back. 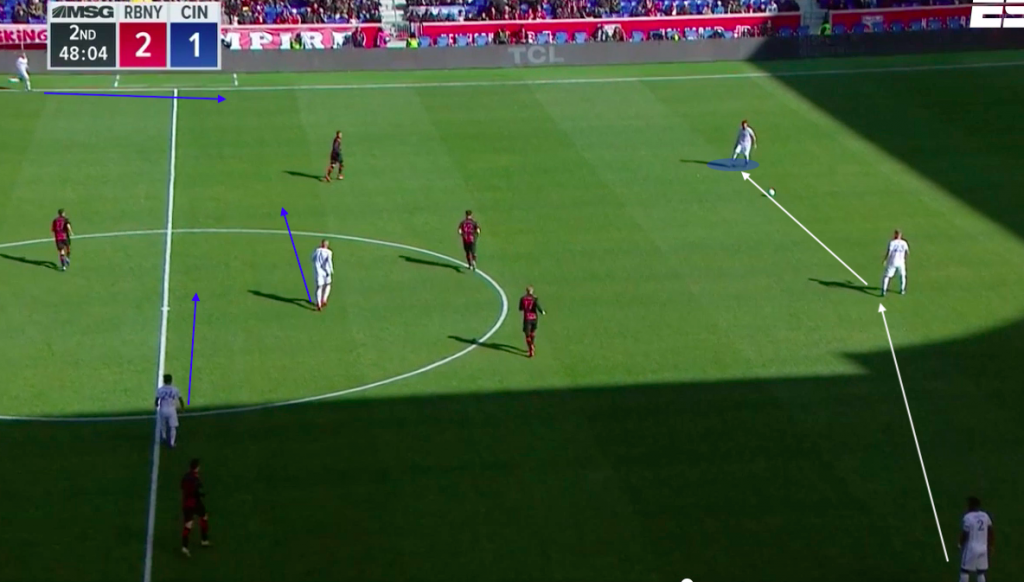 The beauty of this system is that it allows the back line to “skip” the midfield by playing balls straight into the forwards. Here, with Garza forward, Kubo has come inside and is briefly unaccounted for by the defense, allowing Maikel van der Werff to move the ball directly forward. 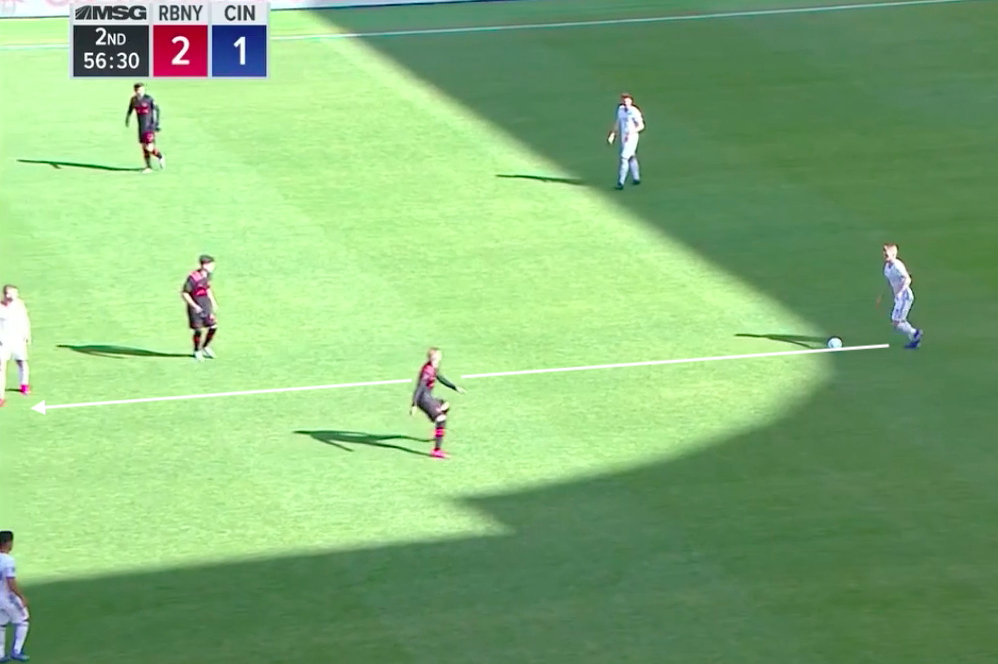 Kubo lays the ball off to Medunjanin, who has moved underneath of him. The speed of play is high because no players have to turn with the ball or dribble, and all players can play the way they are facing. Medunjanin quickly plays Cruz into space. 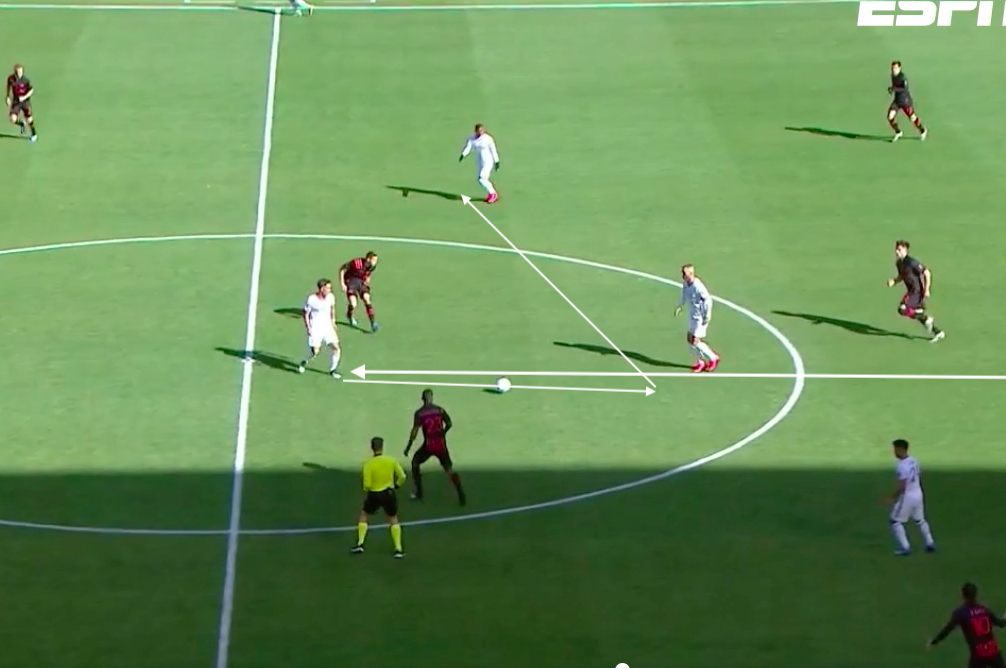 These three quick passes have frozen the Red Bulls backline, and the left-back must worry about Cruz dribbling forward. Instead, Cruz finds Adrien Regattin on the right flank. Kubo continues his run forward, and now Regattin is free to dribble directly at the Red Bulls left-back, with Kubo and Brandon Vazquez moving into the box for a potential cross, and Cruz and Amaya making runs forward in support. 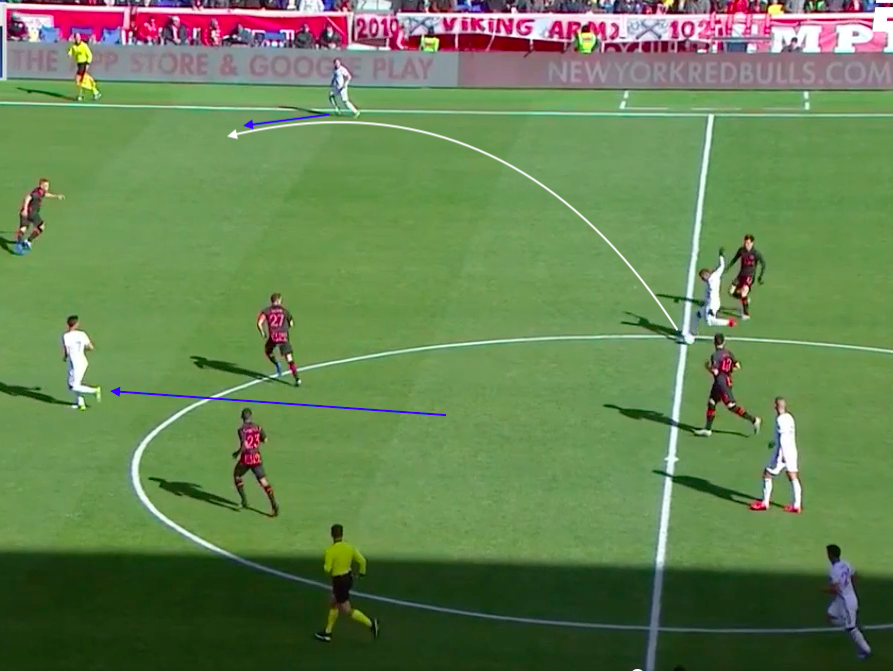 Regattin finds Vazquez, who has a defender pinned on his back. Vazquez lays the ball off, once again playing the way he is facing. Kubo curls underneath and gets off a shot. 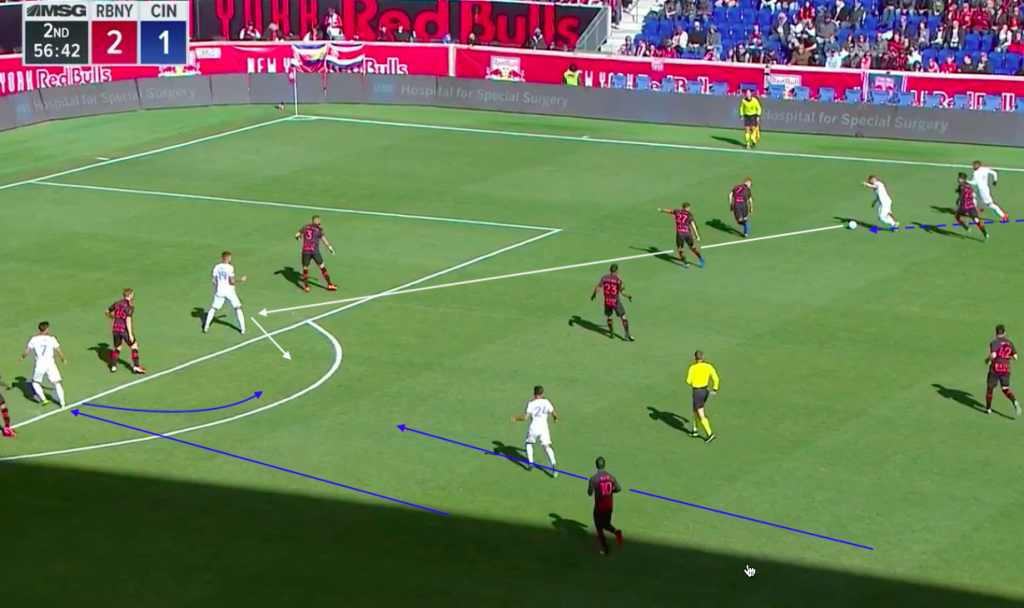 Kubo’s shot sailed wide, and a layoff to Amaya may have been the better option, but overall the move was quick, decisive and put the Red Bulls immediately on their heels.

Of course, because of the fluidity of the game of soccer, players need to be able to account for variations from this game plan. The first and third Red Bulls goal both came at times when Deplagne stepped forward out of his “back three” role.

Here we see an opportunity when an errant pass allows Deplagne (bottom highlight) to step up and win the ball with space in front of him to dribble. Garza (top highlight) is well-positioned to cover for the Frenchman. 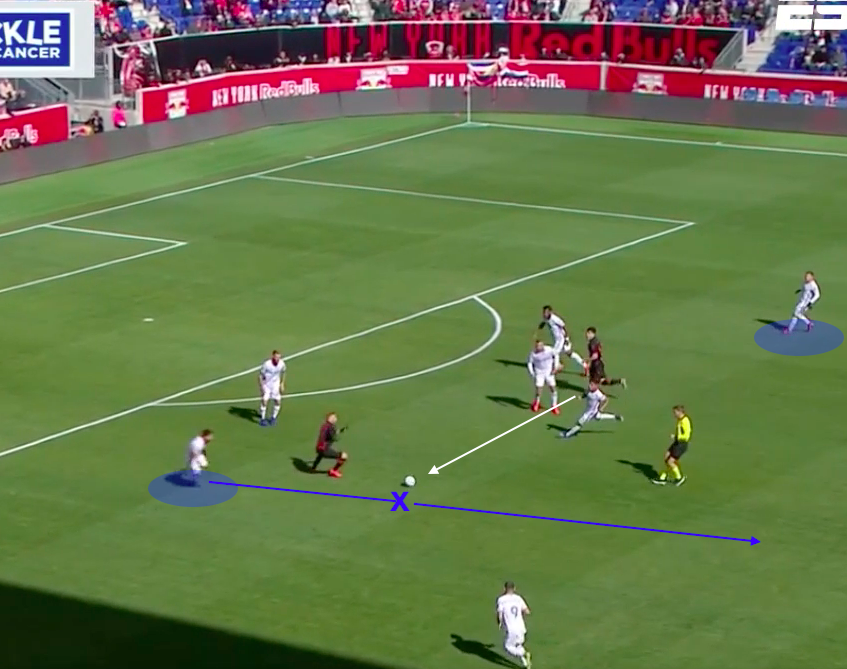 However, as Deplagne moves the ball forward, plays it to Regattin and continues his run, Garza moves up the left flank with no plan on hanging back to cover. This exposed the team to a quick counter-attack opportunity after the ball was turned over. 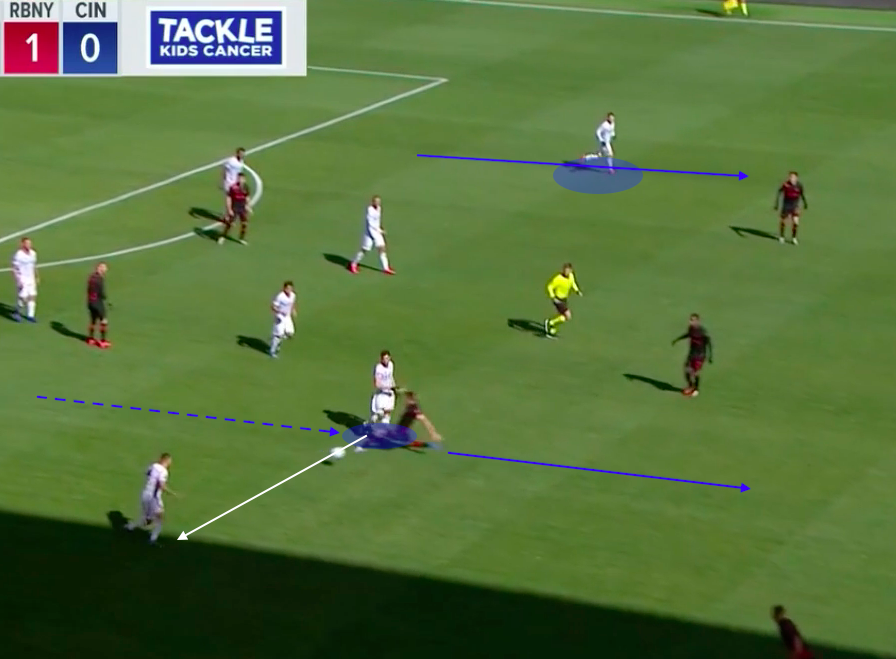 In the second half, we saw a similar play where Deplagne was given space to dribble up the right flank. He took that space, played a short pass to Regattin, then continued his run to provide Regattin with a passing option. 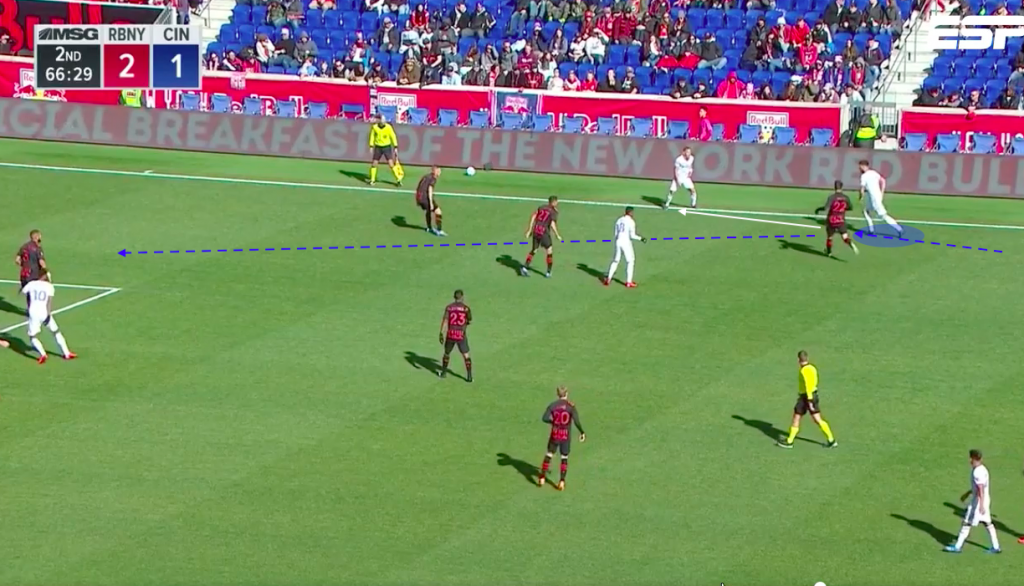 Regattin gave Deplagne the ball in the corner of the box. Unable to get off a cross, Deplagne turned the ball over. Despite all of this action, Garza continued to move forward, leaving only van der Werff and Kendall Waston to hold down the defense. 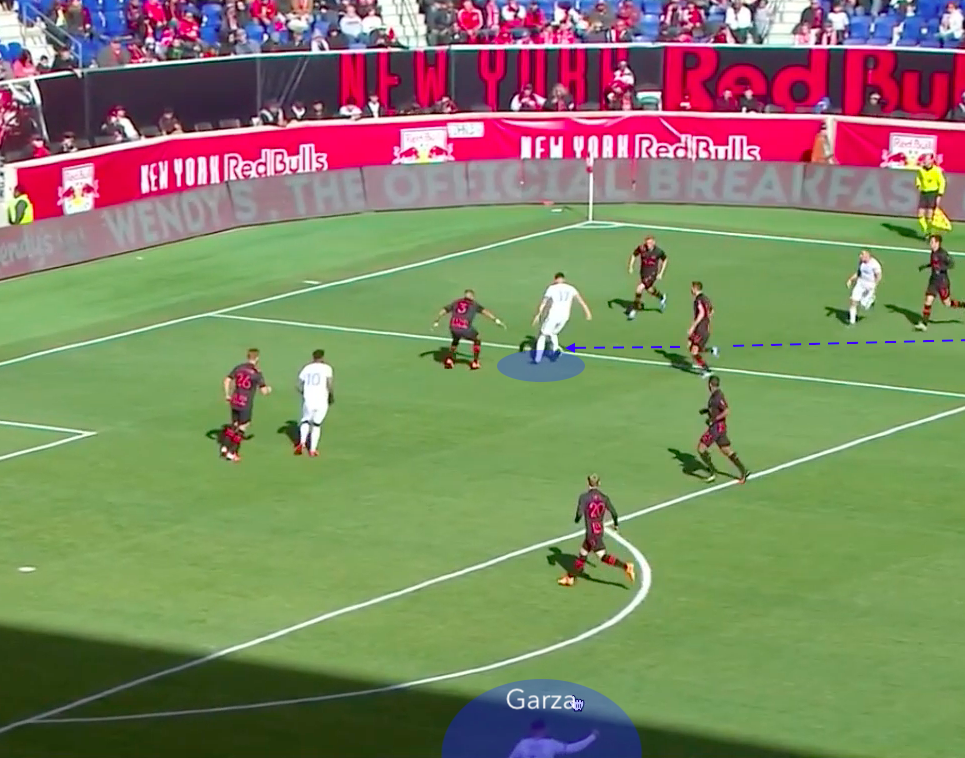 Fixing this shouldn’t be a problem as there are several options. Damet could limit Deplagne and tell him to never go forward; Damet could emphasize to Garza that he needs to rotate back defensively on the rare occasions that Deplagne does get forward; or Damet can play a double pivot, putting either Amaya or Cruz defensively alongside Medunjanin to drop into the backline as a third center back when both outside backs are caught forward. Any of these three options would work, depending on the style of play Damet wants to employ going forward.

The Fourth (and best) Option

In the coaching world, we are fond of saying that all possessions need to end with a goal or a “good” turnover. A good turnover is one where the opposition wins the ball in a way that allows you to press or fall back defensively. This means that the ball goes out of play, ends in the keeper’s hands or the opponent wins the ball running toward his own goal and must play a negative pass.

So why does FCC struggle so much with bad turnovers? Many of the team’s turnovers against the Red Bulls were simply the result of poor touches and under-hit passes. These things should improve with time as the players get comfortable and shake off the rust.

However, oftentimes bad turnovers are the result of setting oneself up poorly to receive a pass. This is something that is a simple fix, but must be addressed on the training ground. Below you can see how Amaya checks into a window for Deplagne but allows two Red Bulls defenders the opportunity to step in and win the ball, leading to a quick transition. 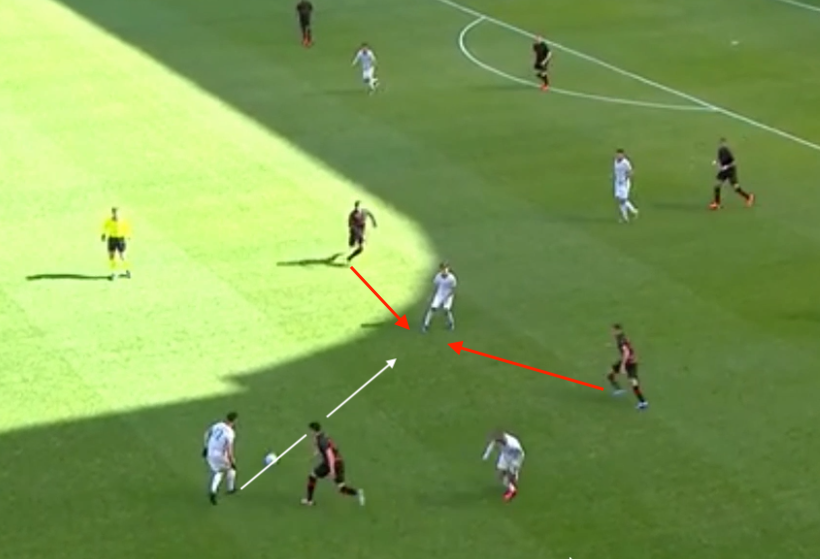 With the slight adjustment of playing on the half turn to receive the pass, Amaya could use his body to shield one defender and keep the other defender in his sights so that he can use his first touch to avoid any tackles. 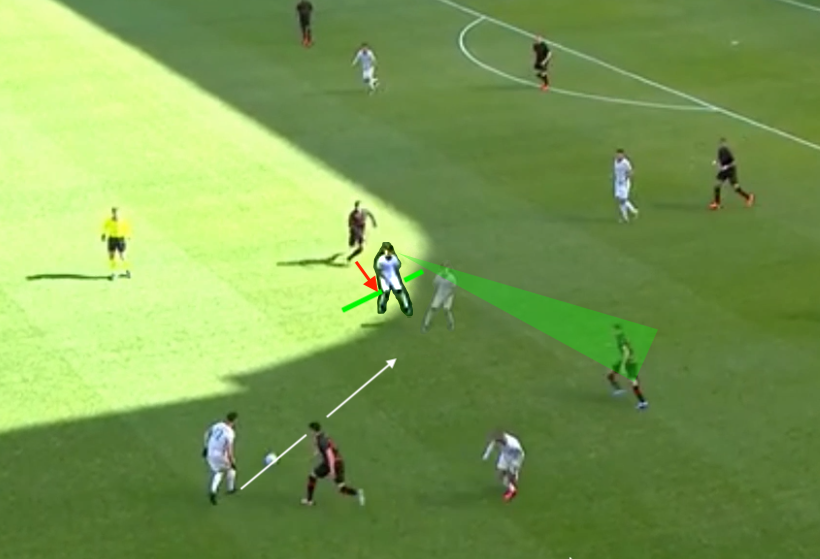 Other times bad turnovers are the result of low speed of play, especially when playing a pressing team like the Red Bulls. Below a great move allows Amaya to find the ball with a clear passing lane into Vazquez. 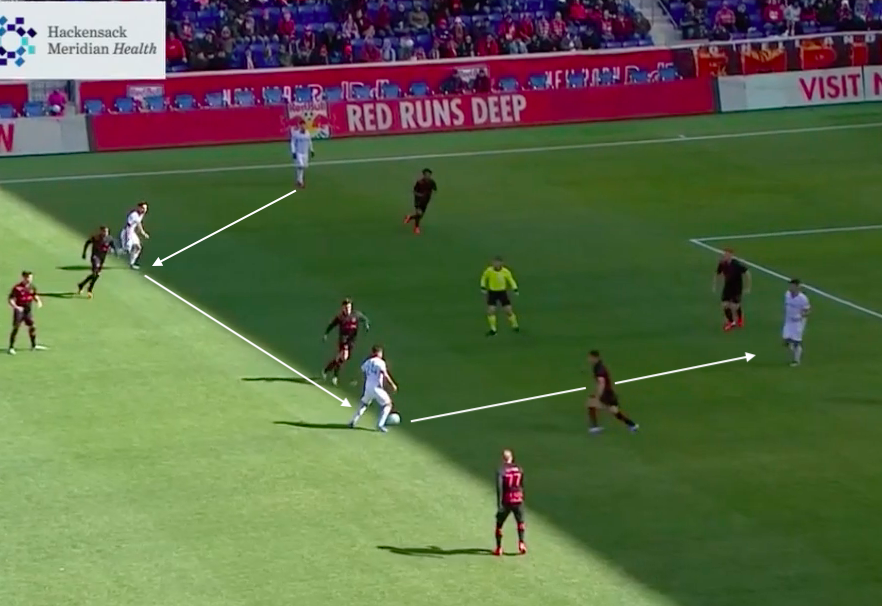 Vazquez receives the ball, and for a brief moment has two great passing lanes to find either Amaya with the return ball or Kubo bursting forward to his right. 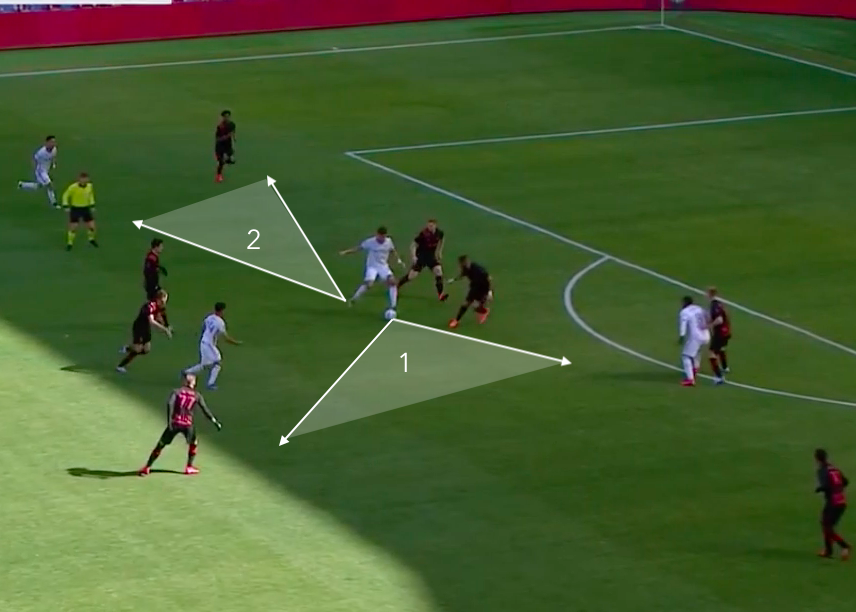 However, the forward takes one touch too many, and the swarming Red Bulls defenders close quickly. This leaves no space to find a teammate and leads to Vazquez being dispossessed and the Red Bulls running with the ball in the other direction. 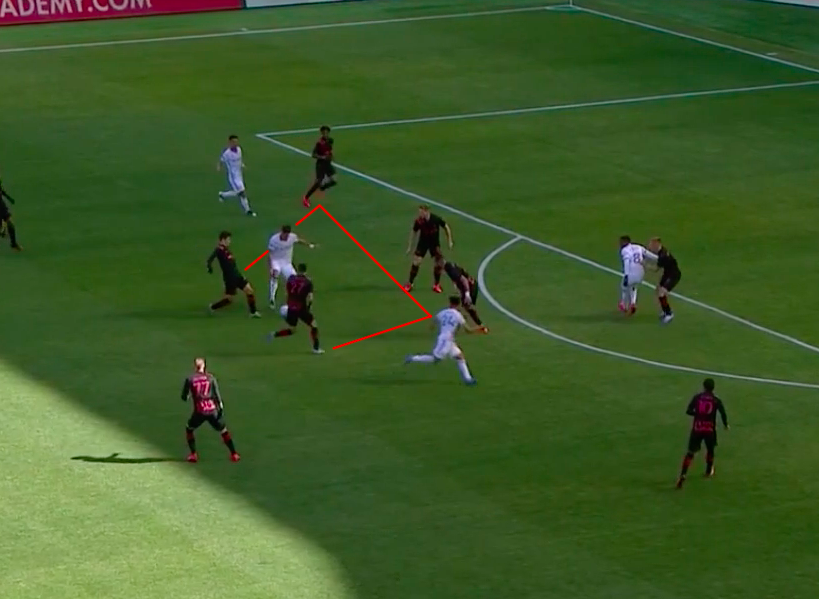 Overall the performance was inconsistent but not terrible. All of the problems the team had on Sunday should be able to be addressed by the coaching staff. The real test of this team heading into the match at Atlanta United will be if the team shows improvement or continues to make the same mistakes.