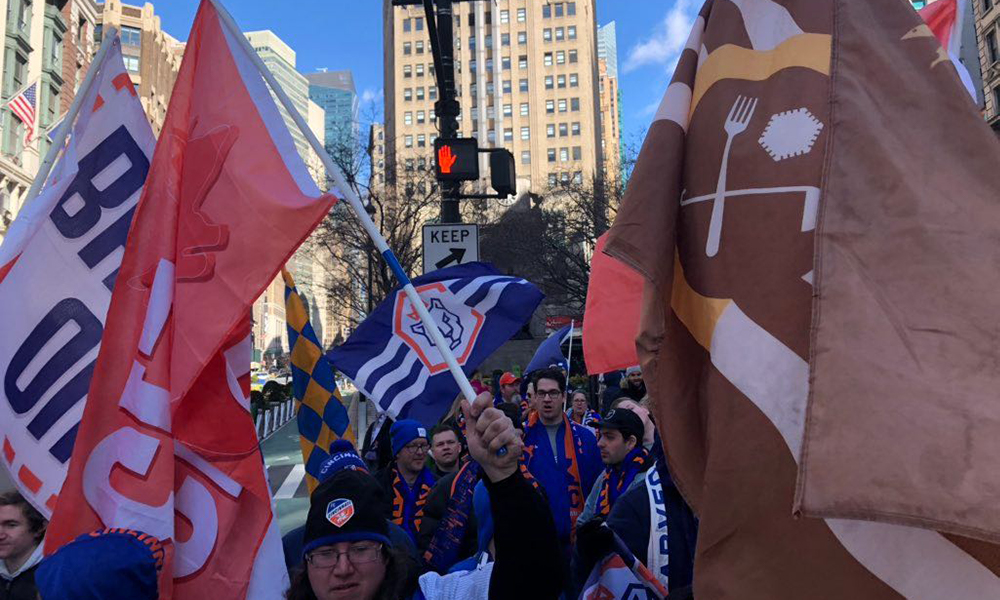 Clay Winstead traveled to New York for FC Cincinnati’s season opener against the New York Red Bull’s and discussed with Auxilia One the importance of a Cincinnati supporters group in the Big Apple.

NEW YORK — “Whether it’s familiar faces or strangers, it’s a little bit of home. It feels like being at home in a super bizarre, crazy, and lonely city.”

These words are still bouncing around in my head over a day later while I watch the Portland Timbers play Minnesota United in Banter, a soccer bar in Brooklyn, Sunday night. On the corner of South First and Havemayer Streets, Banter is the watering hole for many of Brooklyn’s die hard soccer fans. Tonight is no different.

My ties to the Portland Timbers are loose at best. A byproduct of my relationship with a childhood best friend who found his way out to Oregon after high school. And all the way in Williamsburg, Brooklyn, nearly 3,000 miles away from Portland, I found two Portlanders watching the game as well. They introduced themselves and we spent the entire second half talking about the Rose City, what brought them to New York and their love of the Timbers.

That’s what soccer does for the diverse people of New York City. “It feels like being at home in a super bizarre, crazy and lonely city.” It’s how FC Cincinnati’s first remote supporters group, Auxilia One, began. That pursuit of home.

Federica Borlenghi is sitting with me in the lobby of the Signature Theatre in Midtown Manhattan, alongside fellow Auxilia One member Megan Bowling, when she says these words. It feels like a light bulb has gone off in our heads, and Federica continues “It’s like having a bite of cake from home. And that’s why I always go.”

New York City is an incredibly isolating place. There may be over 8 million people in the five boroughs, and you may know a few dozen of them, but seeing them isn’t easy. It can often take an hour or more to travel to another neighborhood — about as long as the drive from Cincinnati to Dayton. There’s usually a walk to the station, catching the train on time and even transferring to a new train to complete the trip. It can make going out and seeing people an overwhelming task. It’s simpler to stay in your little neighborhood, shop at your local grocery store and stay home.

Many who live in New York were not born in New York either. Whether you’re a transplant from some other town in America or a first generation American from an immigrant family, there may not be many ties left to your homeland. There are plenty of people who are born and raised, lived and died in New York just like Cincinnati. But New York City is unique in how many people pick up their lives and move there. Even the best adapted ones who really feel comfortable in the city miss where they come from.

That’s where soccer comes in for Federica and Megan. They are both founding members of Auxilia One and came to it in the hopes of recapturing that sense of belonging. Both moved to the city within the last five years and spoke about having to create connections for yourself.

“You have to seek them out,” Megan, originally from the east side of Cincinnati, told me. “And to seek them out with other people who are like minded in that way, who want to get that same thing, you can’t beat that. You need that here, or you’re going to be miserable. You’re not going to make it.”

There are supporters groups for FCC in Cincinnati, and they all create that sense of connection. But in New York City, that feeling must be sought out because it won’t be there for you otherwise. Living in the city constantly reminds you how big everything is. There are so many people from so many different places; how can you find common ground? What do we have in common?

I lived in New York before. I couldn’t ask someone at a bar what school they went to without having to ask multiple follow up questions. But at Auxilia One, that’s one of the first things we did. The relationships among Auxilia One members felt baked in. When we came together, everyone spoke with familiarity. We asked about where we lived in Cincinnati and what brought us here. We would commiserate over cheaper groceries at Kroger, our favorite breweries and Graeter’s ice cream.

It’s what I experienced during the 2018 FIFA Men’s World Cup: wearing matching England jerseys with my manager at work (he was originally from Liverpool), witnessing — what felt like — every Brazilian in New York pack into Kilo Astoria for every match, visiting the Bohemian Hall and Beer Garden to find Danish and Croatian fans filling the garden with songs and chants while their teams played. It’s what I was doing tonight with the Timbers fans I just met. It’s what Auxilia One does every week.

“When you bring a group of people together like that, no matter where you are, it’s just like nothing else. It’s wonderful because we all just have a great time together,” Megan said. “Support the team. Support the city. That’s what I love too, I’m not just supporting a team, and the game but I’m supporting the city that I love.”