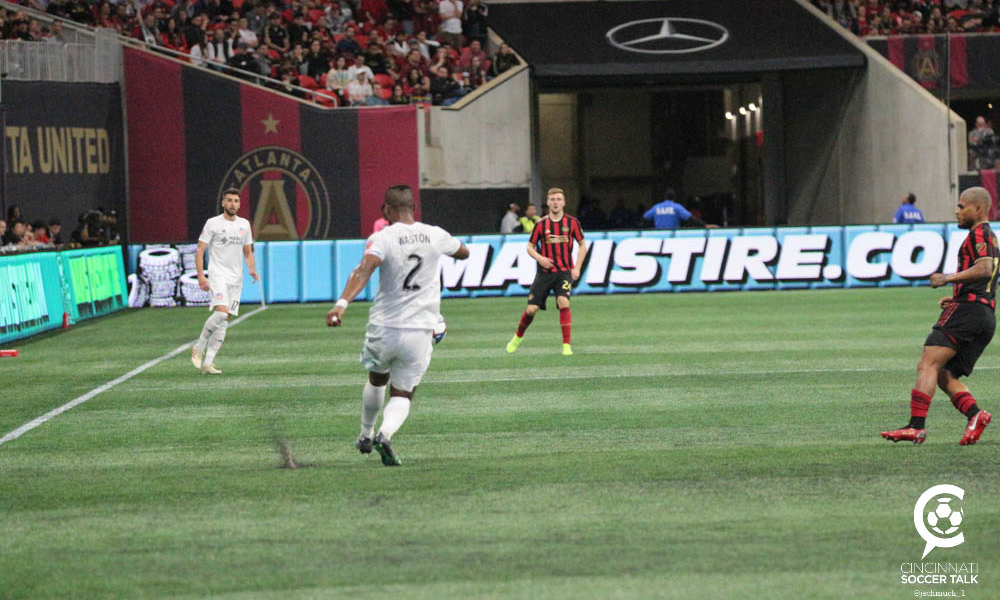 For the second time in two years, FC Cincinnati will travel to Atlanta United for the second game of the season. Kickoff is at 7 p.m. Saturday from Mercedes Benz Stadium in Atlanta. Last season in the match, the Orange and Blue scored late to secure the first MLS point in club history. This season, FC Cincinnati will have to rebound once again from an opening day loss. FC Cincinnati fell in its opener to the New York Red Bulls on the road but put forth a valiant second-half effort. Next up are the Five Stripes.

This past weekend, Atlanta United knocked off MLS newcomers and FCC USL rival Nashville SC, 2-1, in front of a raucous crowd in the Music City. The victory did not come without paying a significant price. Former MLS Golden Boot winner and 2018 league MVP, Josef Martinez, suffered a torn ACL in the Nashville match and will be out for the 2020 season. This is a devastating blow to the Five Stripes, who were looking for MLS and Concacaf Champions League glory in 2020. Martinez is the face of the club and the main cog to their offense, scoring 82 goals during his time in Atlanta. The loss of Martinez means Atlanta United has to scramble to find someone to step in to help take the load off Pity Martinez and Ezequiel Barco.

How will Atlanta United approach this match against a much improved FC Cincinnati side? Even though its defensive first-half performance against the Red Bulls left a lot to be desired, without Josef Martinez, FCC will have much less to worry about in terms of the Atlanta United attack. In their previous two matchups, Martinez accounted for all three goals scored by Atlanta United against FCC. Manager Frank de Boer will have a lot of work to do with his lineup. Against Nashville, the Five Stripes came out in a 3-4-2-1 formation with Adam Jahn replacing Martinez after his injury. With Jahn being the only true forward option, it will be intriguing to see how de Boer handles the lineup and approach to this match against FCC.

On the FC Cincinnati side, the key is to build off of the solid second-half performance against the Red Bulls, which saw the Orange and Blue score twice. In the match, the club showed a lot of fight, which was something that was lacking in most matches last season. The match also saw new designated player Jurgen Locadia score in his MLS debut. With proper service, Locadia has the potential to do serious damage in this league with his goal-scoring acumen. Locadia only played in just about 30 minutes, so one can imagine what can be done in a full 90. That task will be up to interim manager Yoann Damet. Damet came out with a 4-1-4-1 formation with only seven returning players getting the start. Up top, Brandon Vazquez made his FCC debut until Locadia came on for him in the 64th minute. Vazquez helped get things going in the second half with his assist on Allan Cruz’s first goal of the season.

How will Damet approach this matchup with an Atlanta United squad who is missing its best player and a club who is also in the middle of CCL play? Against the Red Bulls, FCC had the majority of possession and saw them fire 11 shots while only conceding six shots. The main issue was that three of those shots faced hit the back of the net. FC Cincinnati was torched on the wings and in turn caused two very easy first-half goals. The back four of Greg Garza, Kendall Waston, Maikel van der Werff and Mathieu Deplagne saw mixed results with some playing well and some others struggling. Will Tom Pettersson make his debut on the back line is one question that will be answered this week as well, and if Siem de Jong is available, will he make his debut?

A victory for FC Cincinnati would do wonders for a club that saw its inaugural MLS season become an absolute nightmare. With a massive date against Club America next week in CCL play, Atlanta United could be caught looking ahead. Without Josef Martinez, Atlanta United has an uphill battle in every match it plays until an adequate replacement is brought in. Look for the Orange and Blue to build off their performance against the Red Bulls and go after Atlanta United to try to bring the full three points home.

As always, stay tuned to Cincinnati Soccer Talk as we will have all the reaction from this match against the Five Stripes.