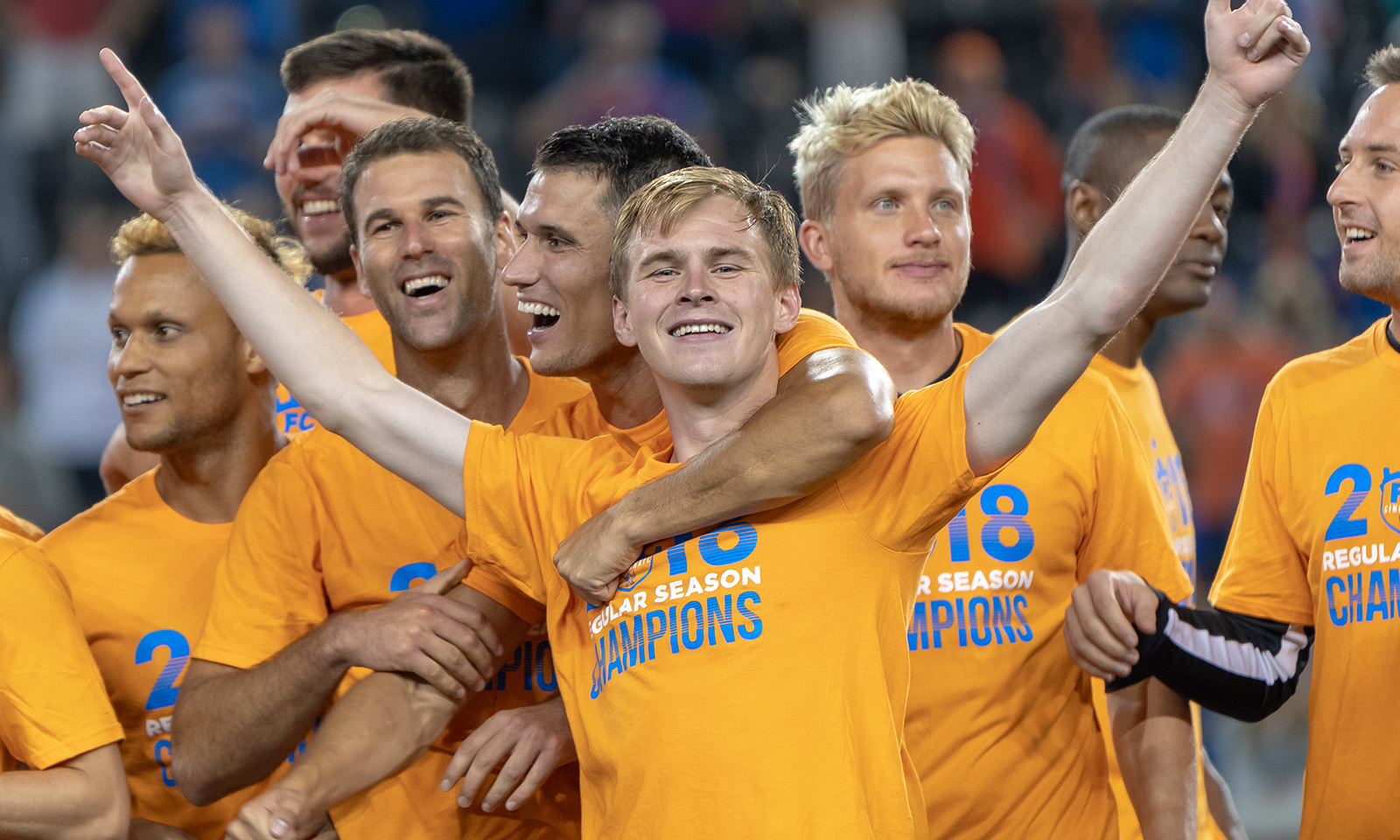 Returning from an ACL tear, Jimmy McLaughlin is the last remaining player from FC Cincinnati’s inaugural 2016 season. He’s a trialist for the 2020 preseason and has just a few weeks to make his case to stay.

McLaughlin is part of FC Cincinnati lore. As a member of the club’s first USL squad in 2016, he quickly became a fan favorite with his hustle and dances after scoring goals.

As the years progressed, more and more members of that inaugural year moved on to other clubs. When FC Cincinnati climbed up into MLS, there were only two inaugurals left on the roster — McLaughlin and Corben Bone.

Then after the 2019 season, the club announced it was not picking up the options for either Bone or McLaughlin. Bone left. McLaughlin says he isn’t done yet, making him the last man standing from the first season. 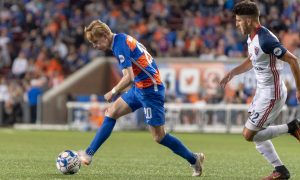 “I love this club,” McLaughlin said Saturday as players reported to start the preseason at the Mercy Health Training Center. “This club has done so much for me. This city’s given me everything. I want to be here forever. This club is who I am. It’s an honor for me (to be the last remaining inaugural player). There’s been so many amazing players to come through the organization and so many amazing friends I’ve made along the whole road. So I want to continue that legacy of having somebody from the original team carrying on and proving that somebody who was on the original team can succeed in MLS.”

After tearing his ACL training at home in Pennsylvania last January, McLaughlin was delayed of his opportunity to prove he could make the jump to MLS from the 2018 team that won the USL Supporters Shield.

Back at full strength, that opportunity for him is now.

FC Cincinnati invited him to camp — still without a contract — as a trialist. He has just a few weeks to prove he belongs on the 2020 MLS roster.

“Obviously there’s always pressure,” McLaughlin said. “That just comes with the business. I really want to be here, so there’s that factor as well. But at the same time, all I can do is focus on the things I can control. There’s a lot of external things here that I’m not going to have a hand in. So from that sense I know I’m going to do and I have done everything I possibly can to succeed here and I’m going to continue doing that. I’m going to leave it all on the table and I’ll be happy either way.”

ACL tears make for a long road to recovery. McLaughlin had milestones as last season progressed, such as being able to run again and, near the end of the season, doing some light workouts.

“It was brutal,” he said. “The timing (of the injury) was awful. I worked so hard to get the opportunity in MLS and for it to happen there (before preseason) was obviously heartbreaking. Everybody tells you it’s a really tough, lonely road back. And it was. They were not wrong. It’s a lot of work by yourself in the gym, not being a part of the team, not being on the field, not being able to run for awhile. So yeah, it was really tough but I honestly think I’ve come out of it stronger — not just from a physical side but from a mental side. You go through that and you learn to persevere through those tough times. I’m excited to carry that to the soccer side and can use it to help me on the field.”

To make matters worse, FC Cincinnati struggled on the field in its first MLS season. All McLaughlin could do was sit and watch. The club spiraled into last place and went from March 30 to July 6 with one MLS win.

“There’s nothing worse,” McLaughlin said of his position as a spectator. “You want to be on the field every single game. I think it’s way harder to be on the sideline watching it happen when you’re not out there, you’re not participating. It was really tough. I felt for the guys too. It was tough for everybody. Nobody wants to be part of a losing team, and it’s not fun to be part of a losing locker room. I can tell you it was terrible coming in here every day when we’re not getting the results that we want.”

But it wasn’t all gloom for McLaughlin.

He became a student of the game, absorbing details by watching things that can be missed in the middle of the action.

“With us taking the jump up to MLS, naturally the quality of player rises,” McLaughlin said. “I had a unique situation where I was watching from the sidelines every single day and I got to see how these players who were playing at the highest level conduct themselves and how they focus every single training session to get better and the little movements and little things that maybe I had never noticed before when I’m on the field playing. I think from a soccer IQ side as well, I’ve learned a lot.”

McLaughlin has been involved with many of FC Cincinnati’s biggest USL moments. He scored the game-winning goal in the club’s first U.S. Open Cup victory over the Indy Eleven NPSL side in 2016. He also started the night of the USL Supporter Shield celebration in 2018 at Nippert. Then he converted a penalty kick in the USL quarterfinal round as FC Cincinnati advanced over Nashville SC.

But he’s not counting memories just yet if he doesn’t make the roster. He said he hasn’t thought about that yet because he hopes to make even more memories.

“Honestly I’m really hoping I do stay here and I’m confident that I will have proven that I can be here and earn a spot,” McLaughlin said. “I haven’t really had a chance to think about that. I feel like I have a lot more work to do here. There’s so much more I can give. I think I have not even come close to reaching my potential as a player and in terms of what I can do here in Cincinnati. Cincinnati’s taught me so much. It’s brought back the love for the game for me. It showed me that if you stick to a plan, you work hard and you believe in yourself and you believe in the team and the city that anything can happen. This was a longshot for everybody to be in the position that we are four or five years ago.”