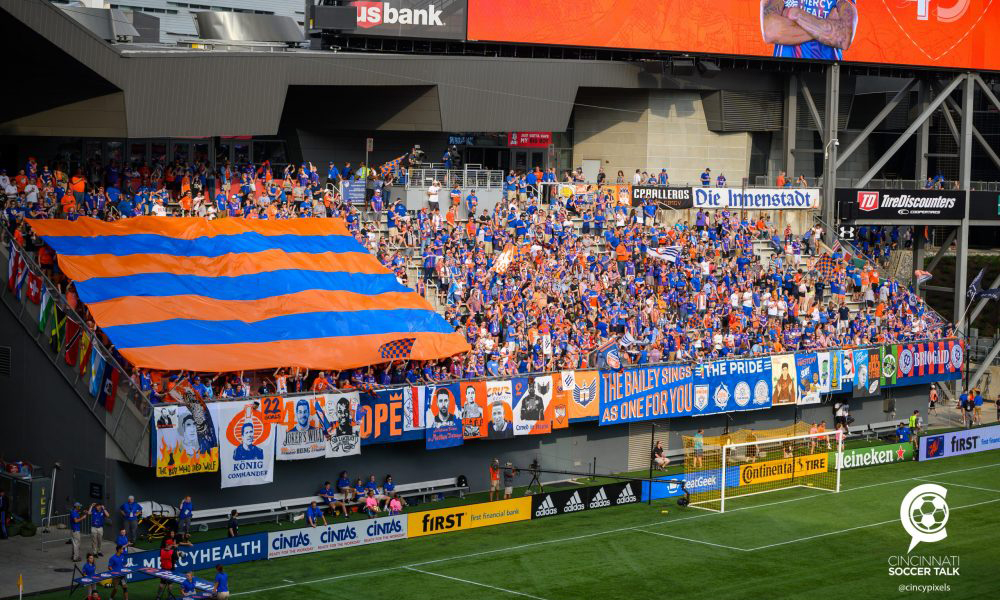 Coming off a USL regular-season championship and three straight years of winning seasons, FC Cincinnati fandom was at an all-time high. Few saw the tide turning.

Coming off a USL regular-season championship and three straight years of winning seasons, FC Cincinnati fandom was at an all-time high. The club outspent its peers in the lower leagues and had built a large amount of goodwill with local soccer fans. The devotion FCC fans had seemed to clash online with the overall mood of seasoned soccer fans. Why is the social soccer world so jaded when things always work out so well? Those expectations and lack of failure bled into the local media as well. Why would anyone doubt a club with such success off and on the field?

Very few were in attendance for the first glimpse at FC Cincinnati’s MLS strategy and assessment. Those that were nodded in agreement. On March 6, as the MLS campaign kicked off, FCC invited fans to Taft’s Brewing Co. The goal was to meet players, get autographs and have a beer. Most fans were in lines meeting those players when club president and then-general manager Jeff Berding sat on a stage with former coach Alan Koch, former technical director Luke Sassano and showed the first signs of acknowledged weakness. Taft’s was full of fans, but I happened to be standing with the hundred or so fans that were not in an autograph line listening.

Berding – FC Cincinnati is over 450 million into this project. Compare that to the teams that came into the league early with low overhead. When we are done we will have the largest soccer specific stadium in the US and we will use that income to sign the big players.

This was the tweet I posted from that event. and it sadly fell short of the impression I walked away with. At the time, Berding was trying to emphasize the investment being poured into the long term future of FC Cincinnati. He got that point across, but it was also admitting the “big players” were not coming until a new stadium was built. The impression that the speech left was that FCC was on a three-year course. No-one including FCC management saw the lackluster season coming, but getting by on a budget week to week was clearly the plan.

Alan Koch – We have another transfer window and we hope to make some adjustments. We will have another one in the offseason and will make more. This is a project and we will get better each week.

FC Cincinnati did not get better each week. It got worse and it ultimately cost Koch his job. He was right about FC Cincinnati being a project, however, and that remains true to this day. FCC ended up recording the worst record of the year in MLS. The club admitted it made mistakes and implemented a full rebuild at the end of the season. The results of that rebuild are still being made. A new coach, a new general manager, even new investment has been added to the club in recent weeks. The question now is, do Berding’s words still ring true? Will FC Cincinnati try to get by in the 2020 season or will they attempt to coast by waiting for that new stadium revenue?

Adi currently sits at the club’s sole designated player. He’s a player that does not want to be on the roster and one that FC Cincinnati seems to want to move on from. Darren Mattocks is eating $500k from the salary budget with little to show for it. Fans have seen the club make changes to the front office. Will FCC make changes on the pitch or wait until it has the income to sign the “big players” in year three?

Ken Hoetker and Brad Weigel recently broke down the FCC roster; go check it out if you have not had a chance yet. That article breaks downs the Adi-Mattocks problem financially. If FC Cincinnati wants to prove to fans that it is not phoning in year No. 2, those are the roster spots to prove it. One or both need moved, and it is likely a million dollar buyout loss will be needed. Eating a million bucks isn’t easy. Money aside, it is also an admittance of past failure. That loss would prove to fans that FC Cincinnati will fix its prior mistakes. The club has signed new players to strengthen the defense and midfield, but an attacking core is still lacking. With plenty of offseason to go, the question in my mind is: “Are we still on the three-year track? If not, prove it.”