FC Cincinnati looks to shape its roster for 2020, but several challenges stand in their way.

Editor’s note: This breakdown of FC Cincinnati’s roster build is a collaboration between Brad Weigel and Ken Hoetker.

The final event of the 2019 MLS offseason concluded Tuesday with the second round of the Re-Entry Draft. With the selection of Saad Abdul-Salaam, FC Cincinnati’s roster now sits at 26.

We are going to break down what potential moves we could see as FC Cincinnati sets themselves up for the 2020 season. For the sake of this exercise, we are going to stick with the same rules for senior, supplemental, and reserve roster spots. With changes coming in early 2020 to the collective bargaining agreement, we will assume slight increases to the roster budget as well as general allocation money and targeted allocation money.

The first thing that sticks out is the roster charges for Fanendo Adi and Darren Mattocks. As a Designated Player, Adi’s salary budget hit counts as a maximum roster charge of $565,000 (expected for 2020). At $520,000, Mattocks’s salary is just below the maximum roster charge, which means he cannot be bought down with TAM. His full salary goes towards the budget, wherein an ideal world a slightly higher cap hit could’ve been bought down with TAM. It will be tough to do but FC Cincinnati needs to get at least one if not both players off the books for 2020. While Mattocks’ salary is up there, he has proven he can contribute in this league. With his green card, he is likely an attractive option for teams, and you could see him move in the winter window. If they could do that, it would be massive for the rebuild. If they can’t move the players, FC Cincinnati has the ability per the CBA to buy out one player and avoid a cap hit. Logically the club would rather eat Mattocks’ salary rather than $1.8 million owed to Adi.

Where to go from here?

Assuming the club keeps Adi and moves on Mattocks, there are up to five senior spots available. It is not expected that FC Cincinnati would fill them all this window, but two DP slots would be open along with $1.114 million in discretionary TAM for players. The downside is the club is left with two available international slots after coming to terms with Haris Medunjanin. Coach Ron Jans settled down the defense late in the year and would expect the majority of the moves to come on the offensive side of the ball.

Another issue the club faces is all the returning players. With players like Tyton, Garza, Manneh, etc., they are full of players with budget charges below the TAM threshold. A former USMNT midfielder like Miguel Ibarra, who would be an attractive signing, cap hit in 2019 was $342,000. That would fall below the TAM threshold to be bought down and FC Cincinnati doesn’t look to have that room in the cap unless they don’t fill all three DP spots deeming the move unlikely. I’d expect most if not all of the moves this offseason to be TAM/DP level.

It is difficult to bring in an impact player from Europe in the winter, and frankly, FC Cincinnati might not be the most attractive landing spot after the 2019 season. What the club can do is use its compliment of allocation money and resources to bring in a veteran U.S. international looking to move back to the states to solidify the club. With limited spots, the club could use a move similar to Caleb Stanko to bring in a vet without using up a coveted international spot.

FC Cincinnati was linked to Fabian Johnson last year, and now could be time for a move. The club needs depth on the right-wing, and Johnson could fill that role. He is just returning to the bench after injuring himself in late August for Borussia Monchengladbach. Cincinnati would have to move up from the third spot in the allocation order to grab him, but with the extra allocation money, it should be able to swap spots with Nashville.

FC Cincinnati can also pull in a player in MLS Free Agency. A name that comes to mind and is familiar with a lot of fans is Justin Meram. Meram seemed to breathe life back into his career in the second half of 2019 with Atlanta. Atlanta declined his option, and the midfielder/winger could come to Cincinnati and immediately contribute in an offensive group that includes Joseph-Claude Gyau, Kekuta Manneh and Johnson. Meram would be a TAM player, and his domestic status would leave the coveted international spots to potential DP’s.

The next move the club needs to make is to go find the next young Allan Cruz. While 2019 was a draft year for FC Cincinnati, Cruz was a revelation. The club can head down to Central and South America to find the next young DP. There is so much talent in Uruguay, Brazil and Argentina at a fraction of the price of a European, plus the sell on factor is huge. Los Angeles FC brought in Brian Rodriguez from Peñarol in Columbia, and he immediately contributed with five goals in seven matches. A young DP in 2019 carried a salary charge between $150,000-$200,000 depending on age, which is a massive discount compared to a European vet. As you can see there are still several roster limitations for FC Cincinnati, and this is a creative way they could splash the cash to bring in a difference-maker at a fraction of the cost.

Finally, FC Cincinnati needs to go out and put its money where its mouth is. While FC Cincinnati had one of the worst seasons in MLS history, teams have proven if they bring in the right DP, it can turn them right into a playoff team. Look how Wayne Rooney in 2018 rose all the boats around him for DC United. While a South American young DP could be easier to bring in this transfer window, look for FC Cincinnati to bring in a talented playmaker by the summer window where more players might be available. General manager Gerard Nijkamp could also be on the lookout for an undervalued loan option. Josef Martinez was struggling for minutes in Serie A for Torino before his loan to Atlanta. A $3 million-$5 million DP could do wonders for this club, and Nijkamp needs to utilize his connections made over the years to make it happen. 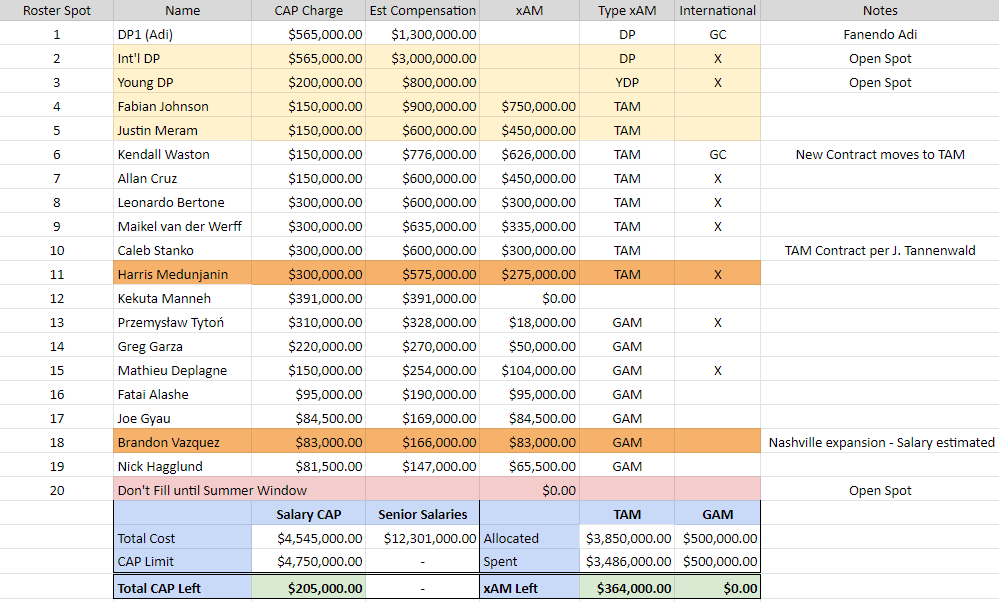 It is more than likely Adi will be moved one way or another this offseason. There is so much bad blood between Adi and the organization. He talked so much early in 2019 how he wanted to be the leader and face of the organization, but with injuries and the subsequent DUI, it failed to materialize. If FC Cincinnati can move the striker, it would open up a coveted DP spot, giving the club flexibility in its roster rebuild. The club could then move to the international market to bring in another attacking option.

While it might be a long shot, Nijkamp might look to Germany and Hamburg for Bobby Wood. The 27-year-old should be in the peak of his career, but a tough go at the recently relegated club has taken a lot of shine off his star. A move to Cincinnati could see a return to form for the striker and help provide a path back to the U.S. men’s national team. Wood is no longer on the allocation list, so he could be grabbed easily. Hamburg wants to move on from Wood, but his $3 million salary has been prohibitive. There probably wouldn’t be much in the way of a transfer fee, so FC Cincinnati would need to see if it would be willing to take on the additional salary. He also wouldn’t occupy an international roster spot, which the club would have to acquire if it wants to replace Adi in the international market. Most MLS clubs would’ve jumped at the chance to sign Wood two seasons ago, and at 27 there are still a lot of good things ahead and a change of scenery could do wonders for him.