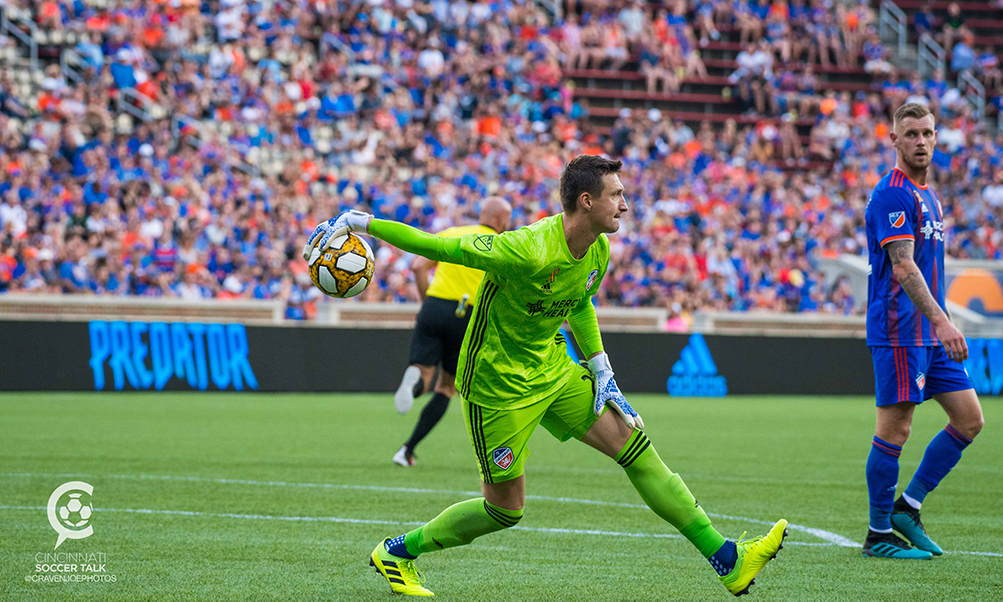 The Orange and Blue protected 12 players and have two automatic exemptions from Inter Miami CF and Nashville SC’s pool of eligible players.

The 2019 expansion draft is upon us, and FC Cincinnati released its list of 12 protected players on Saturday. This draft will be very similar to last year’s, except this year instead of taking, FCC has the risk of being taken from. Nashville SC and Inter Miami CF each will get to pull five players from teams around MLS (except the ones that lost a player last year). If FC Cincinnati loses a player, it will be compensated $50,000 in general allocation money. Let’s break down FCC’s list and see the surprises and not so surprising.

Save the Backup, Leave Titi Open

A few days ago, Trisha Houser put out a top-five list on who she thought FC Cincinnati should protect. Przemyslaw Tytoń was listed in that top five, yet FC Cincinnati decided not to protect him. Despite being FC Cincinnati’s top keeper, there are few things that work against him on the roster. He is paid vastly more than Spencer Richey (who was protected), and he takes up an international spot. FC Cincy may be thinking those two things will naturally deter Nashville and Miami from selecting him. If he is selected, losing an international goalkeeper is not a terrible situation. FCC would free up roster room and may decide to look domestically for someone to challenge Richey in the starting spot. Protecting Richey was a wise move as he is still on an MLS minimum contract and now has experience in the league.

This decision was somewhat expected and serves as bait for either expansion side that thinks they can do better with the DP than Cincinnati has. If taken, an expansion club would get Fanendo Adi in his final contract year at a base salary of 1.2 million dollars. That would currently leave Cincy with no DP but a bucket load of salary cap space to work with. While it is unlikely that either expansion side will take the bait, the chance can’t be written off completely. FCC leaving Adi open is an admittance of the failure they made in a trade with Portland, the club is essentially writing off all the TAM/GAM given up just to acquire the DP. It also looks like Cincinnati is not close to trading him outside the league. If a deal was in the works, Adi would certainly be protected to make it happen. We would still be surprised to see him in Orange and Blue next season as both parties want to move on.

Why Is FCC leaving Powell Open?

This is probably the most interesting decision. On this week’s podcast, we felt Alvas Powell still had trade value. However, the small MLS trade window came and went without a move on Powell. Coach Ron Jans said he picked his starters last season based on who he would be taking into 2020. Powell never saw the pitch. Due to that, Powell is not in the plans for next season, but he is still a valuable asset. Despite not doing well in Cincinnati, Powell did very well playing for Jamacia on international duty — so well, local fans were puzzled on social media about how Cincy might be using him incorrectly. It is disappointing to see Powell left open, as it means Cincy is OK letting him go and only receiving $50k back in compensation. We now suspect Powell did not bring in the expected offers, and he will be hard to move going forward.

Surprise of the day for FC Cincinnati fans. Emmanuel Ledesma’s contract is up, and FC Cincy has said it has been in negotiations for an extension. This decision does not bode well if you wanted to see him in Orange and Blue in 2020. Just to recap, Ledesma and Cruz were FCC’s only main scoring players last season after Adi went down and Darren Mattocks (also unprotected) failed to put them in the net. If FCC is moving on from Ledesma, this is a rough way to break it to the fans. What if he shows up in a gold kit at Nippert next season? Of course, if he is not selected in the draft, FCC has more leverage on a new deal that could see him come back on a lower salary. This looks like the most controversial decision from a fan perspective.

What about the Protected Players?

If your favorite player is in the list above, then congratulations, you have an improved chance of seeing him at Nippert next season. By no means do we think they all will be. Cincinnati still has a guaranteed contract problem and will likely deal out someone on that list to free up salary cap room. In fact, a deal may be in the works which would need protecting. Overall, will Cincinnati have a player taken in the draft? It is more possible than yesterday with these four targets left open.