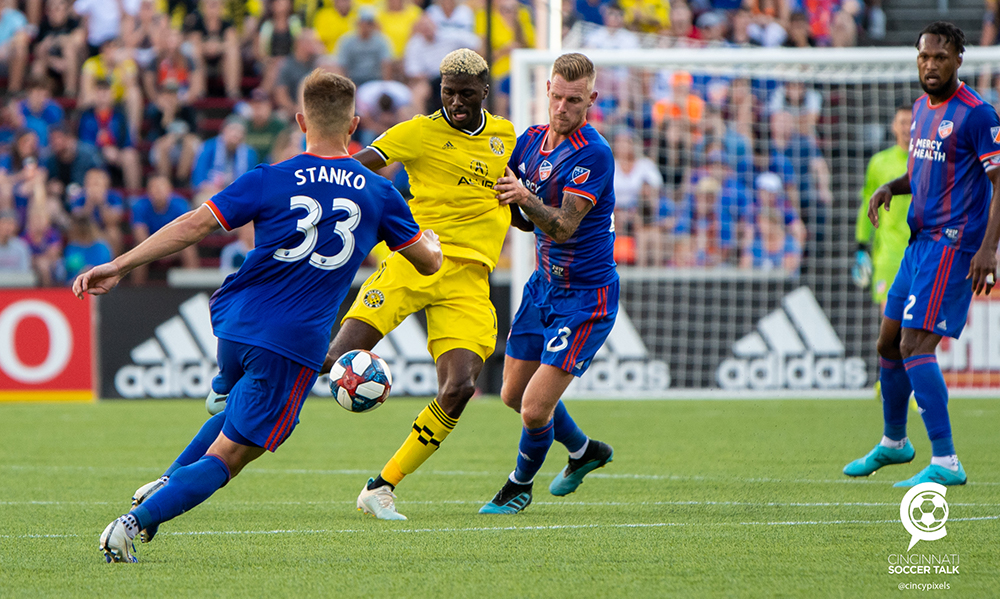 The first of FC Cincinnati coach Ron Jans’ seven evaluation periods for next year is Saturday when the Orange and Blue travel to face FC Dallas.

Hell was real for FC Cincinnati last Sunday, as it was embarrassed by the Columbus Crew at Nippert Stadium. Next up for the Orange and Blue is a date with FC Dallas at Toyota Stadium at 8 p.m. As if the season could not get any worse, the 3-1 loss at the hands of the Crew rocketed FCC to rock bottom.

With the season having gone completely sideways, coach Ron Jans and the front office will begin to look ahead to next season and the players that fit into the plans. At 5-19-3 and last place in the entire league, the club has a unique opportunity to see a few things in the final seven matches of the season to help determine the players that will be on this roster in 2020. Jans was less than pleased with the performance in the first half against Columbus and has said he has been patient in his first three matches in charge, but that is all about to change. Now is the time for players who want to be in the future plans of the club to step up and earn that spot.

This season has seen 13 different players score a goal, with Allan Cruz leading the way with five. However, it is the play from Emmanuel Ledesma that leads the way. The reigning USL MVP leads the team with a total of eight points, a combination of four goals and four assists. The second half against the Crew changed when Ledesma and Kekuta Manneh were subbed into the match. Expect Ledesma and Manneh to play a big part in this match against FC Dallas.

In this match, it will be crucial for FC Cincinnati to start strong. Getting out on the front foot against FC Dallas will be exactly what the Orange and Blue need to get a point and steal a possible three points. Starting strong has not been in the cards for FCC this season. Conceding first will be devastating in this match, as FC Dallas is strong at home.

FC Dallas comes into this match in the final playoff spot in the west. Sitting in seventh place with 40 points, FC Dallas has a great chance to extend its lead over Portland for the final spot in the West. FC Dallas has had an August that is a mixed bag of results. It lost two matches by scores of 2-0 but outscored their opponents 10-4 in its two victories. The only other match was a 3-3 draw on the road in Montreal. In its victories, FC Dallas has looked great but have been less than stellar in others. They are led by a few solid veterans and one of the top youth players in the league.

FC Dallas has some notable players. Names like Bryan Acosta, Michael Barrios, Jesus Ferreira, Jesse Gonzalez, Matt Hedges, Ryan Hollingshead, Paxton Pomykal and Reto Ziegler lead the team week in and week out. Ferreira leads the team with seven goals, while Barrios is tops on the club with 12 assists. FC Dallas has scored 44 goals on the season while conceding 37. With a record of 8-1-5, it’s a much different team at home compared to the road, so welcoming FC Cincinnati to town could help them bring home a crucial three points.

Life as an expansion team has been brutal for FC Cincinnati but as previously mentioned, Jans is going to use these next seven matches to get the players in line for 2020. On paper, FC Dallas has the advantage over FCC in every major category, but as you know, matches are not played on paper. FC Cincinnati can play the spoiler for many teams who are in the same type of playoff position as FC Dallas.