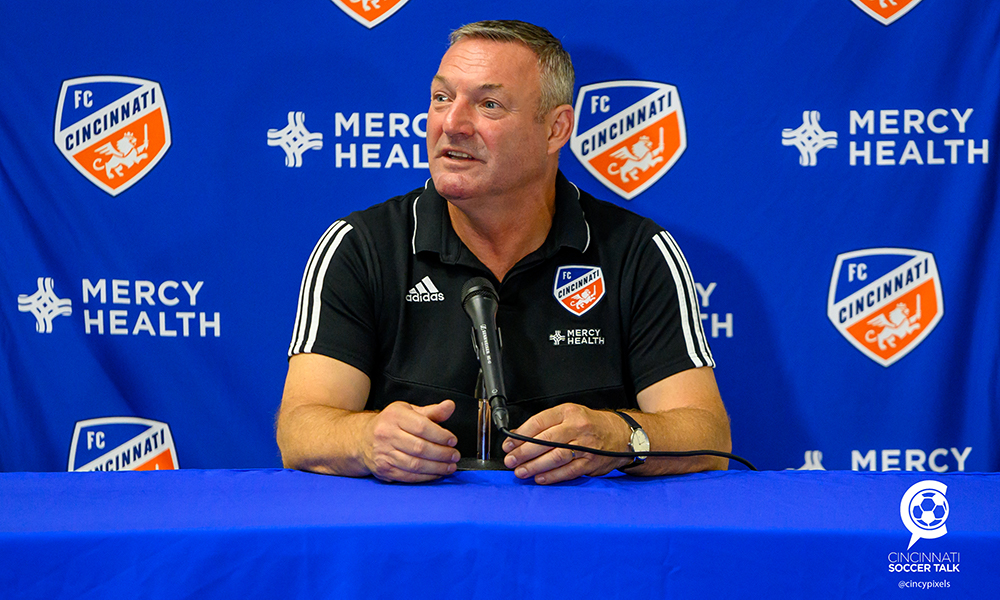 FC Cincinnati coach Ron Jans said he’ll turn his focus toward personnel next year with the final seven matches of 2019.

If there was any pounding of fists or a whiteboard left in ruins in the FC Cincinnati dressing room after  Sunday’s 3-1 loss to Columbus, Ron Jans wasn’t going to let on.

That wouldn’t seem to be the Dutchman’s style, but neither is allowing his frustration to be on public display.

What Jans gained from FCC’s drubbing in the Hell is Real Derby was a clearer focus on where his priorities for the club should reside over the remaining seven matches. While results and the continued refinement of his high-pressing system still are important, Jans has turned his attention to the future.

“We want to build on our way of play and we want to see who fits into our future plans,” he said. “Those are big goals. We are now bottom of the table but we are so far behind, we’re not going to catch other teams. You have to be realistic. There are other goals that maybe even now are more important than the scores.”

That might be a good thing. FCC has a seven-game winless streak. They haven’t won a match at home since beating Houston 3-2 on July 6 and sit at the bottom of the Eastern Conference standings with 18 points from 27 matches.

The evaluation period is now underway, and it’s fair to question why it didn’t begin sooner. But while he’s not ready to discuss individual players and their prospects for next season, it’s clear that Jans is beginning to formulate some ideas in his head. How he utilizes his roster over the next few matches might be telling.

“There are some players who do deserve it, and maybe we will rotate a little bit,” Jans said on Tuesday. “We’ll have to see anyway, because of the international week maybe we will miss some players. So, it’s a good opportunity for some other players to show what they can do. I’m looking forward to seeing other players get a chance.”

Of course, Jans decides who plays and who sits. But in terms of building the roster for what could be the final season in Nippert Stadium, Jans’ opinion matters only as input for general manager Gerard Nijkamp and the organization.

“We have to decide so many things,” Jans said. “That’s not just for the head coach. My opinion is important, but the general manager is responsible for depth. We have some weeks that we have to make decisions.”

The club has about five and a half weeks to decide who stays and who goes, to be exact. And, this isn’t entirely new territory for Jans.

While he hasn’t been a part of an expansion project quite like FCC’s, he does liken it to his managerial debut in 2002 at FC Groningen. The club flirted with relegation for four seasons after being promoted to the top tier before Jans rode in on his white horse.

“It was my first job as a head coach,” he said. “I came in October. After eight games, one point, bottom of the table.”

Within three years, Jans led the club to back-to-back Europa League qualifications. A new stadium brought large crowds and increased revenues which sent the club back to the top half of the Eredivisie.

“Not the same, a little different, but hopefully … we can look back and it’s the same situation,” Jans said. “My goal of coming to America is first, building something with FC Cincinnati.”