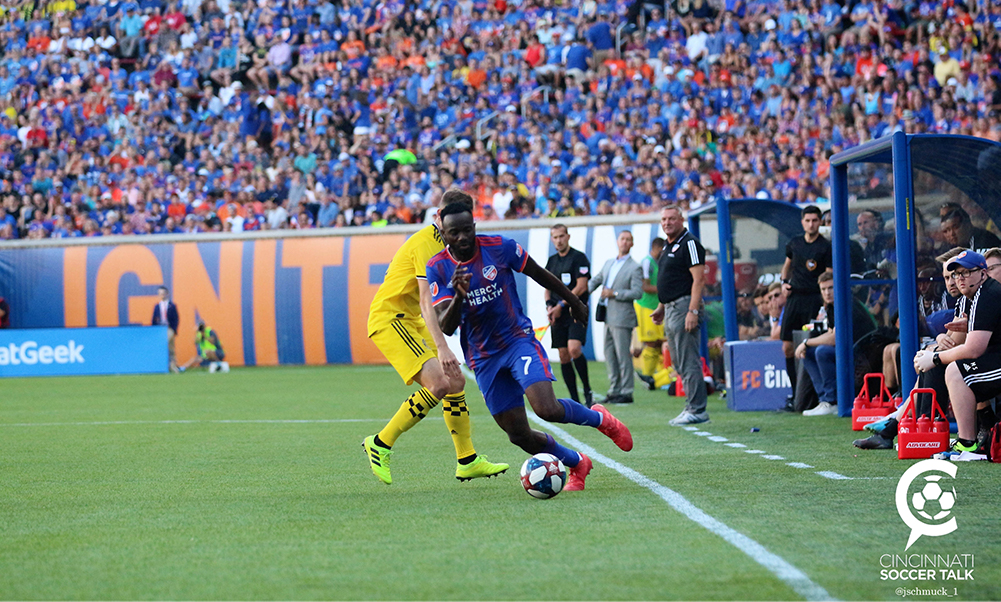 FC Cincinnati was mathematically eliminated from the playoffs on Saturday after a 3-1 loss at FC Dallas.

FC Cincinnati took the pitch Saturday against FC Dallas. This was the first meeting between the two clubs. FC Cincinnati was mathematically eliminated from the playoffs in its inaugural MLS season with a 3-1 loss, its 20th of the season

Injuries have plagued FCC once again. Goalkeeper Spencer Richey is still out of the running with a back injury. Fanendo Adi and Frankie Amaya are still on the injury list. Mathieu Deplagne joined the injury list as well with a calf injury. This is the first start Deplagne is missing since the beginning of the season.

Jans made it clear before the match that he was going to play guys that fit his system. Jans made five changes to the lineup that fit his vision.

FC Cincinnati came out in front with early chances, courtesy of Ledesma. In the ninth minute, Ledesma had a beautiful shot that hit the post. Barely a minute later, the ball was at Roland Lamah’s foot and he took a shot, but it went just wide.

A few minutes went in FCC’s favor, but it did not last long. In the 13th minute, Ryan Hollingshead put Dallas ahead, his shot soaring past the hands of Przemysław Tytoń.

FCC was back in a position that they have been in most of the season – down by a point early in the match and struggling to find momentum.

In the 18th minute, Ledesma was called for a foul, and Dallas was awarded a free kick about 30 yards out. FCC’s defense cleared the goal. Two corner kicks and two clearances later, Dallas was still giving FCC a run for its money.

Zdenek Ondrasek sneaked through FCC’s defense in the 24th minute, but it fell right into Tytoń’s arms. FCC got the ball at Manneh’s feet, and he was off. Manneh made a strong run down the pitch, getting tangled up in Dallas’ defense, and he was unable to get a shot. Michael Barrios of FC Dallas had a great strike on goal, but Tytoń got his hands on it, keeping the score 1-0 in the 30th minute.

Manneh was taken down in the 37th minute and FCC was awarded a free kick. Matt Hedges received a yellow card for this action. Ulloa stepped up to take the kick, but it was deflected. As soon as it was deflected, Barrios got the ball and was off and running, firing a shot towards the goal, but it was just wide.

In the 40th minute, Lamah headed in the ball after a cross from Ledesma. Jesse Gonzalez blocked it in his first save of the night. The score remained 1-0 when the halftime whistle blew.

Early in the second half, Greg Garza was taken down from behind. Barrios got the ball and sent it flying, making the scoreline 2-0 in the 50th minute. Minutes later, Dallas went back for another shot with an Ondrasek header, but Tytoń blocked it with a big save. Ondrasek got the rebound and tapped it back in, making the score 3-0 within a matter of minutes.

Dallas proved why they were in control of the match. And in the 57th minute, Ulloa fouled, and Dallas was given a free kick, but it did not capitalize.

In the 63rd minute, Reggie Cannon fouled Lamah in the box, resulting in a penalty kick for FC Cincinnati. Ledesma stepped up to take the kick, and he got it past the keeper. Moments later, Dallas had a free kick that fell short, and the score remained 3-1 in the 65th minute.

Brandon Servania’s shot went wide in the 68th minute, but Dallas remained in control of the match with 61% possession. Ledesma was given a yellow card in the 73rd minute for a foul against Paxton Pomykal. The foul was called for review against Manneh.

Referee Guido Gonzalez Jr. reviewed the play and issued a red card against Manneh, FCC’s first red card of the season. FCC finished the match one man down. Manneh will be unavailable to play against Toronto on Saturday.

Fatai Alashe fouled Pomykal, giving Dallas a free kick outside of the box. Andrew Gutman intercepted the ball and was off, but Bryan Acosta took him down. Acosta received a yellow card for the tackle, and FCC was given a free kick. Leonardo Bertone took the free kick, aiming for Kendall Waston, but the ball was short.

Dallas maintained possession and kept FCC on its toes for the remainder of the match. Pomykal sent a shot just wide in stoppage time, and Dallas kept the ball at its feet. Ricardo Pepi entered the match late for Dallas and nearly had his first MLS goal at the age of 16. But Tytoń got his hands on it, giving Dallas a corner that resulted in nothing.

The final whistle blew and Dallas walked away with three points from a 3-1 victory.

The Orange and Blue return to Nippert Stadium to face Toronto FC at 7:30 p.m. Saturday.