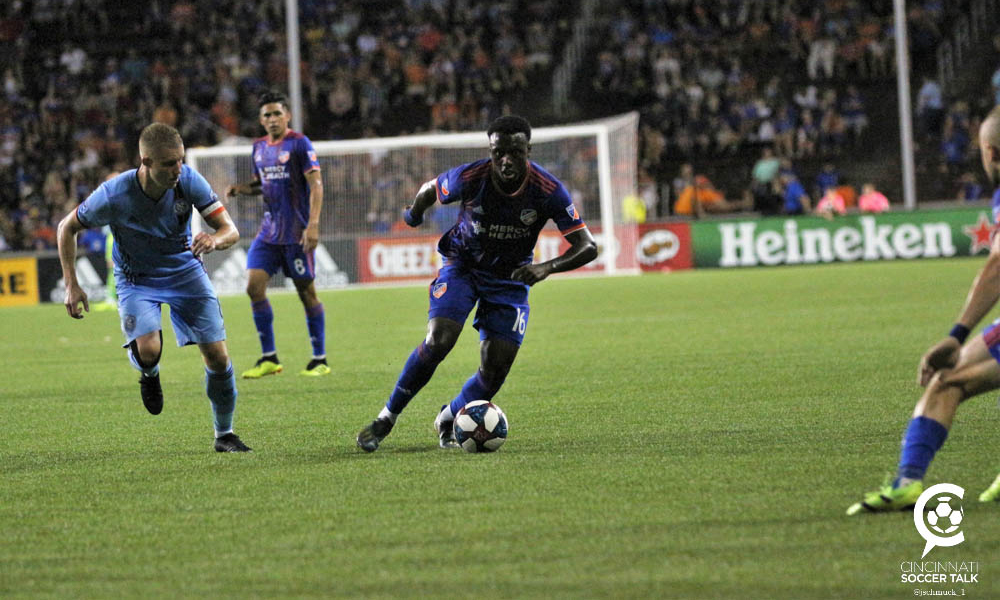 Derrick Etienne Jr. came to FC Cincinnati on loan from the New York Red Bulls to get some minutes as well as goals and assists. He says the system being implemented by new coach Ron Jans is “a style that works.”

Derrick Etienne Jr. had his moment in Sunday’s Hell is Real Derby. It was one more than most of the men wearing orange and blue.

In the 56th minute, Etienne nearly stole some momentum back for FC Cincinnati when he had a clear shot on goal after a nifty pass from Allan Cruz, but he directed the ball into the waiting arms of the keeper.

“He could have scored, maybe with the inside foot,” FCC head coach Ron Jans said. “He worked (hard), but he couldn’t do anything special in creating chances or scoring goals. There was only one moment.”

There likely will be more moments for the Haitian-American, who made his first start for FCC on Sunday, a little more than two weeks after being acquired on loan from the New York Red Bulls.

The 3-1 loss to Columbus Crew was frustrating for everyone involved, but especially for Etienne, who pounded the ball into an advertising board afterwards.

Etienne, 22, seems a perfect fit for Jans’ high-pressing system which showed promise before being exposed in the first half on Sunday. Regardless of that result, Etienne said he respects Jans for implementing a system and sticking with it.

As an outside observer of FC Cincinnati’s prior coaching regimes, Etienne said he never quite understood what they were trying to accomplish.

“You couldn’t really see what style of play they wanted to do,” he said. “Sometimes they would press high up the field, sometimes they would sit back and try and counter. I think (Jans) brings in a philosophy that no matter what, he’s not trying to change and that’s to play high pressing football. That’s what I’m used to coming from Red Bulls.”

Etienne was attracted to the project at FCC and the opportunity to get more minutes than he was getting in New York, where he started just 22 of his 60 matches. The initial conversations he had with Jans made him confident he could incorporate himself into the squad quickly.

“He understands aspects of some of things we tried at Red Bulls,” Etienne said. “He has different nuances to bring to it. Different ways to press. How we can be better with the ball. You can’t press for 90 minutes, so he definitely is trying to bring high intensity but also more quality.”

Etienne, a Richmond, Virginia, native who has dual citizenship in the U.S. and Haiti, comes from a footballing family. His father, Derrick Etienne Sr., played internationally for Haiti. and professionally in the U.S. for the Richmond Kickers. His sister, Danielle, helped Haiti clinch a berth in last summer’s U-20 FIFA World Cup in France by finishing third at the Concacaf U-20 Championship.

Etienne, who has scored three goals in 11 appearances for Haiti, has been thrust into some big situations despite his FCC tenure still being in its infancy. He was openly frustrated following Sunday’s loss. He mostly wants to win, but he also badly wants to score.

“I need goals and assists to say I’m playing very well,” he says. “Until that happens, I’m just playing OK.”

That doesn’t mean Etienne, who scored six goals for Red Bulls, isn’t willing to do the dirty work to help his club win. He said the best way to earn respect from his new teammates is to put forth an effort in training each day and be willing to make plays on the defensive side of the pitch.

The scoring chance aside, Jans saw plenty of good things from Etienne during Sunday’s match, one in which most FCC players rated poorly.

“He’s a guy who works for the team,” Jans said. “He showed that he can be even more important for the team on the details. Especially when we lose the ball, the wings have to help our midfield that much more.”

Etienne’s reaction following Sunday’s loss was telling. Only three of his 60 appearances in MLS have been with FC Cincinnati. But despite being with a new team in a new city and now part of an expansion project, his goals remain the same.

“I want to win games,” Etienne said. “Coming here, they let me know the style of play they want to play. I believe it’s a style that works. Just trying to get everyone on the same page and get some results to close out the year.”