Brad Gough breaks down all four Hell is Real Derby goals in this week’s edition of How They Happened.

It didn’t take long for Caleb Porter’s Columbus Crew to figure out the weak spots in FC Cincinnati’s defense, as they cantered to a 3-1 win at Nippert Stadium on Sunday. Here’s a look at how they did it, as well as how FCC clawed one back late to avoid the shutout.

Columbus Crew’s opening goal began with a long ball from the goalkeeper. For the first 20-odd minutes of the match FCC’s center backs, Kendall Waston and Maikel van der Werff were getting bossed by Gyasi Zardes and company in aerial duels. On this one, the Crew made them pay. Maikel van der Werff got caught badly underneath the long ball from Eloy Room allowing Zardes to not only get the first touch but to bring the ball down cleanly.

Because he gained easy possession of the ball, he was able to turn and find Pedro Santos running by a ball-watching Caleb Stanko. Andrew Gutman was well positioned to marshal the run of Luis Diaz (blue circle).

However, as Santos ran with speed at the young full back, Gutman bit hard in an attempt to win the ball. It was an unnecessary challenge, as Waston was well-positioned to cover, and Stanko was fast in pursuit. When Santos played the ball to Diaz, Gutman was still yards away from the challenge. 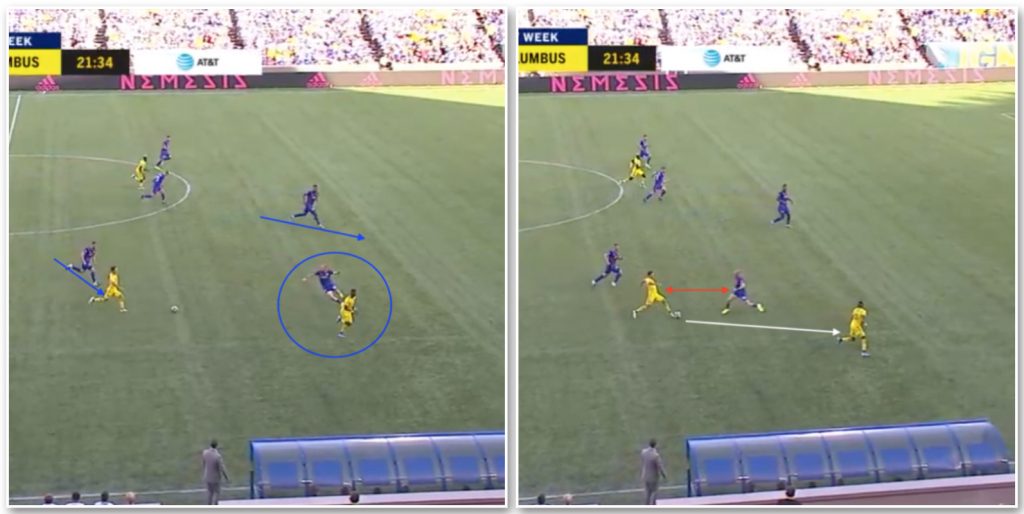 With Gutman out of the play, Diaz easily played an excellent ball in behind the FCC defense. He only needed to beat van der Werff’s recovery run and let Zardes do the rest. Zardes, perhaps uncharacteristically, finished easily. 1-0 to the visitors. 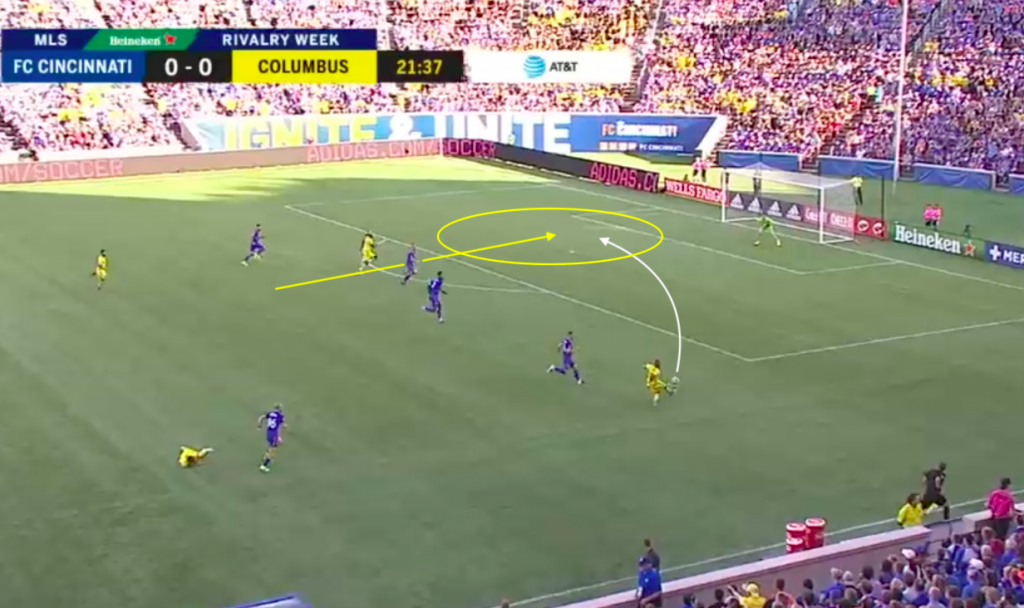 For their second tally of the night  the Crew once again picked on Gutman’s side of the field. Another long ball bounced around the midfield without an FCC player able to get a decisive touch. To this point, Stanko had been charged with man-marking Santos out of the match. This was effective in limiting Santos’s contribution but proved costly, as the Portuguese made a run to the weak side of the field, dragging Stanko with him (red circle) and exposing FCC’s left flank. 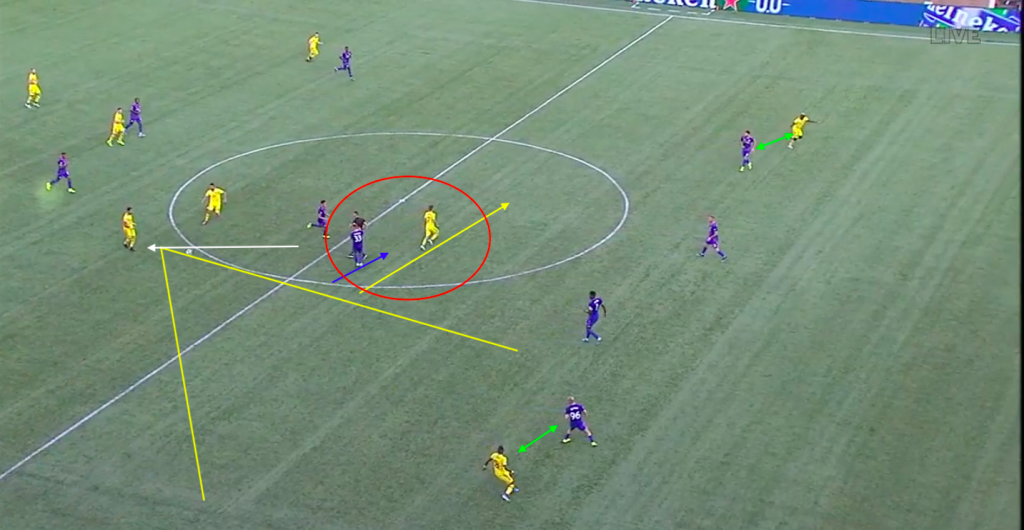 Gutman was tight on Luis Diaz, and the center backs were free because Zardes had drifted to the left flank where Mathieu Deplagne was stationed. Had Stanko not been in man-marking mode van der Werff could have picked up Santos, leaving Stanko free to challenge the pass or help out on the left wing.

With Roland Lamah caught behind the play (as often happens), Harrison Afful received the ball on a full sprint with acres of space to pick out his cross. Zardes peeled off to the inside of Deplagne, who failed to either pick up the American or pass him off to van der Werff. A great first touch and another uncharacteristically cool finish — 2-0 to the visitors. 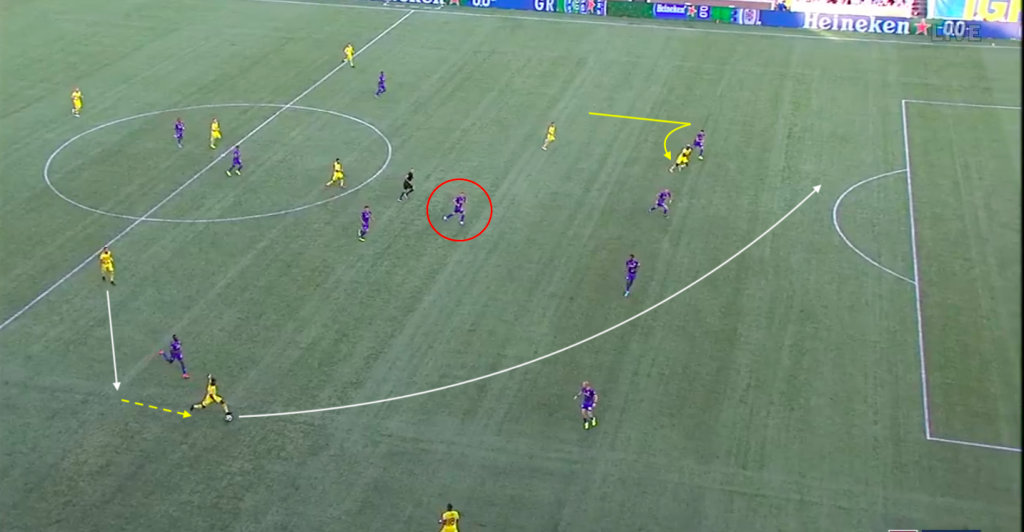 Another FCC match, another stoppage-time goal. Once again a long ball that was not cleanly won by the FCC defense bounced around the midfield before being looped to Zardes (red circle). The FCC center backs, wary of another run in behind, were caught dropping and left Zardes the time and space to turn and play Santos into space. 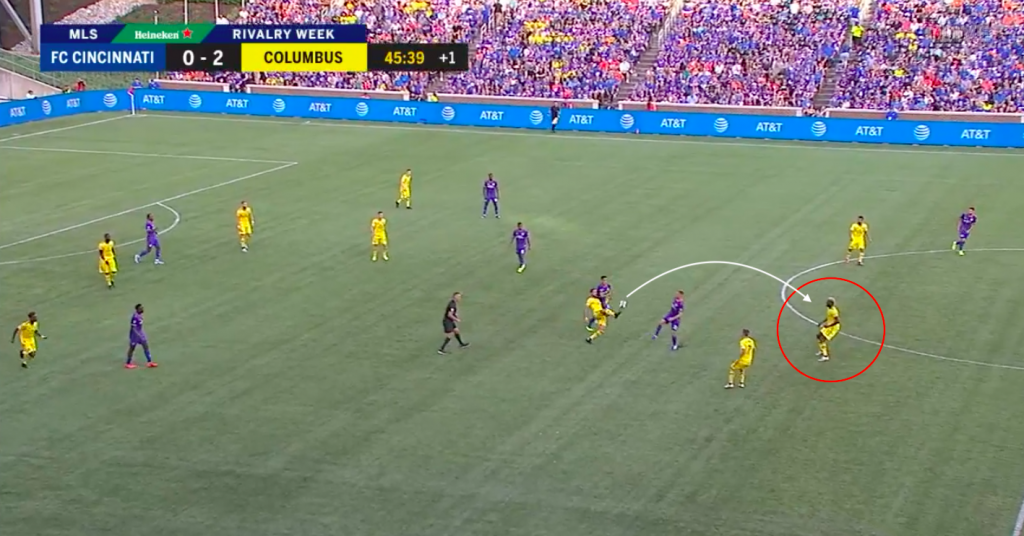 Victor Ulloa got immediate pressure on the Portuguese midfielder, and Gutman was well positioned to limit the pass to Diaz. However, Gutman incorrectly used inside technique, facing toward the center of the field instead of his runner. When Santos looped the ball toward Diaz, Gutman had to slow his run and try to turn and find the ball, allowing Diaz to bring it down in full stride.

With the number of times that Zardes was left running free through the middle, it’s somewhat understandable that Przemyslaw Tyton was anticipating a cross. However, he will not be happy seeing how poor of an angle Diaz had to beat him at the near post. 3-0 to the visitors. 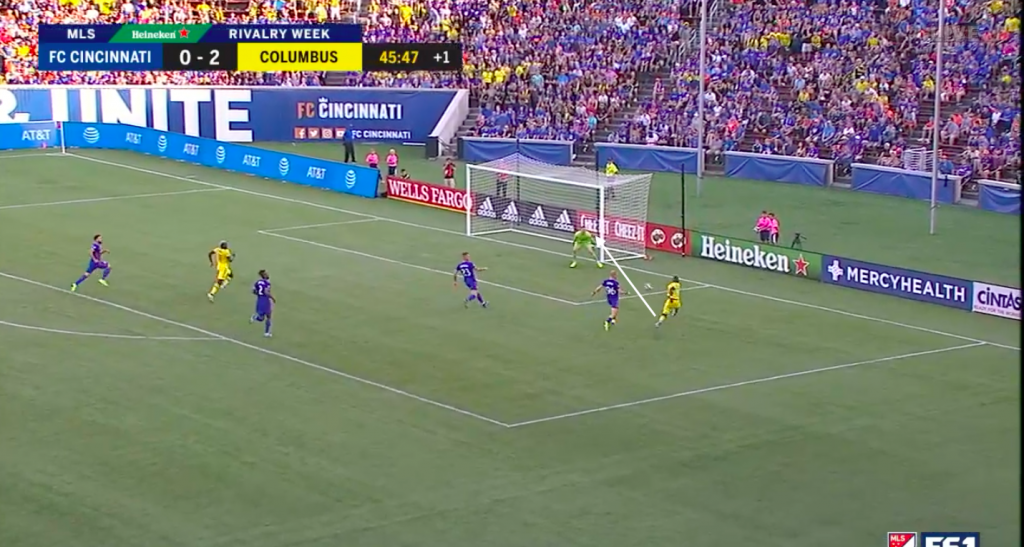 FC Cincinnati played much better in the second half, regardless of whether Columbus sat back or tried to pile on. However, it was not able to break the Crew’s shutout until the final minutes of regulation. Coach Ron Jans likes to have his weak-side wingers pinch centrally to exploit the space just behind the opponent’s defense. This worked brilliantly for FCC’s only goal of the match, as Lamah found Emmanuel Ledesma wide open in this space. 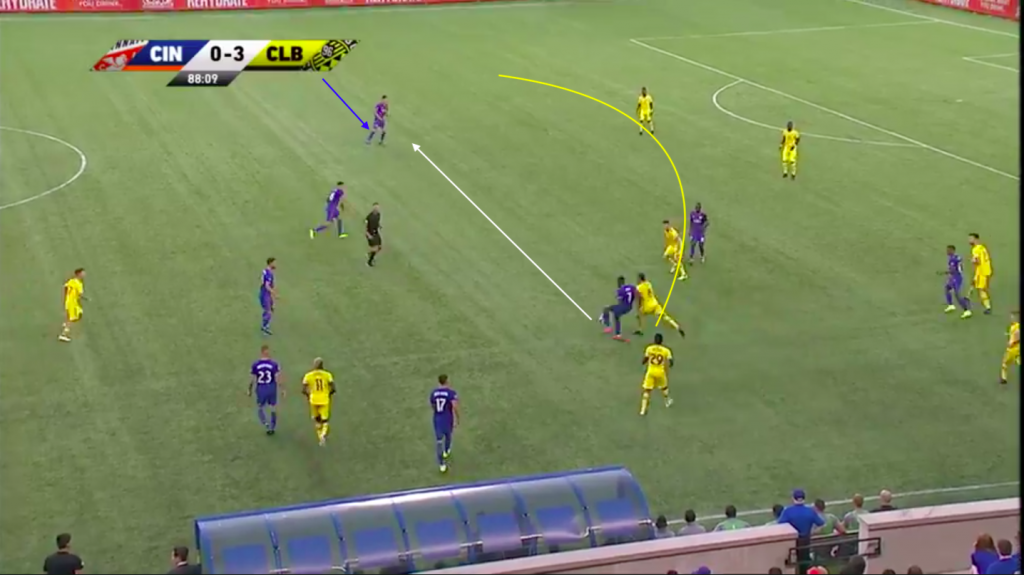 With Ledesma on the ball, Ulloa continued his run through the space in front of the Argentine toward the left flank. This was absolutely key, as it pulled Crew defender Jonathan Mensah, allowing space for Kekuta Manneh to run between the center backs. Ledesma disguised his pass brilliantly, feigning a shot and causing Afful to turn his back to the play. 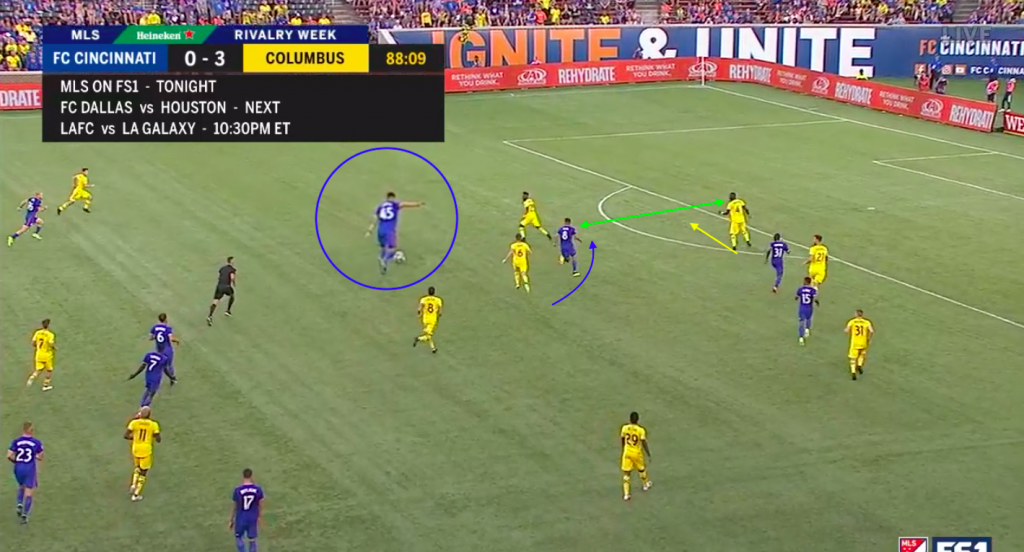 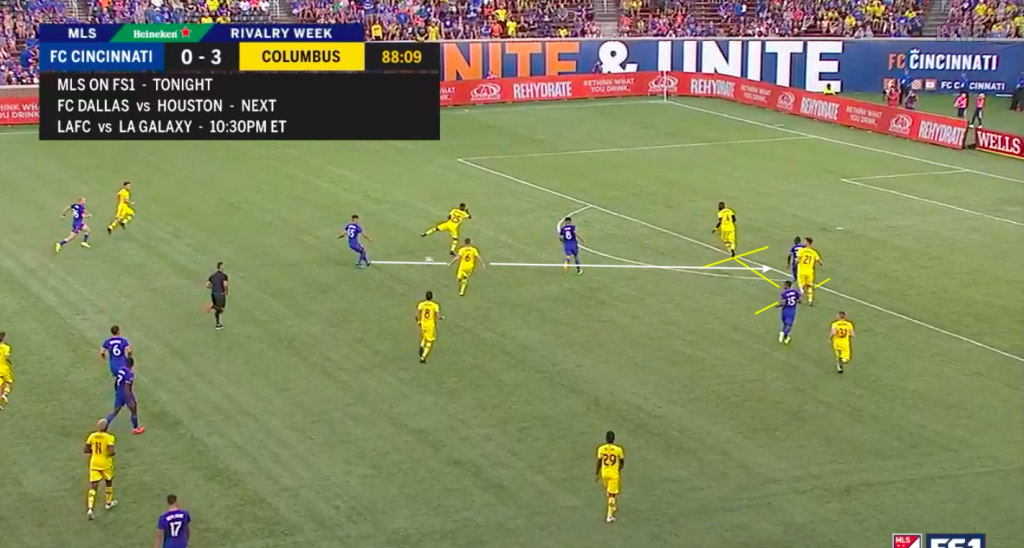 In another individual moment of brilliance, Manneh’s first touch should not be under appreciated. The Gambian not only cushioned the ball beautifully without slowing his run but also took the ball away from the Crew defenders, creating the space he needed to beat Room to the far post. 3-1 to the visitors. 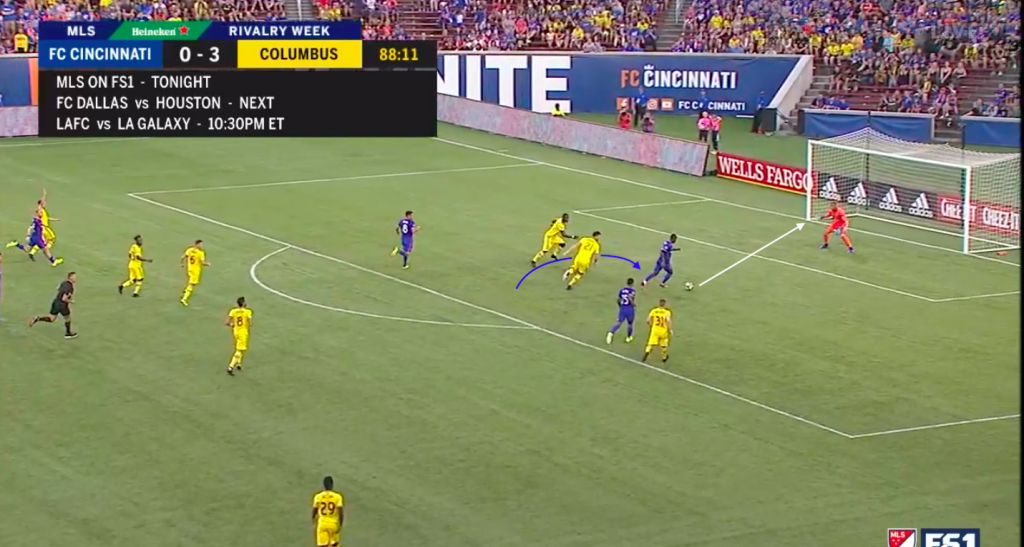 The improvement in the second half on passing percentage, aerial duals, dribbles and overall possession was stark. Jans said after the game that it’s time that players decide whether or not they want to buy into his system and play for the team. We’ll have to wait until Saturday’s tough road game at Dallas to see if this tough talk pays dividends.