Brad Gough breaks down all the goals scored in FC Cincinnati’s 4-1 loss to New York City FC on Saturday.

Heading into the 70th minute of Saturday’s home loss to New York City FC, fans would’ve probably taken a 2-1 loss to the third-place team in the Eastern Conference as a sign of improvement. But after two late goals scored, FC Cincinnati found itself on the wrong end of another lopsided defeat. Here is a look at how all the goals happened.

Allan Cruz’s opening goal was a beautiful move starting with, of all things, a throw-in. Andrew Gutman took the throw and stepped back into play. NYCFC’s Alexandru Mitrita was in charge of marking the thrower but turned off once the throw was taken. Kendall Waston to step up and thread the ball into Victor Ulloa who had taken up good space just in front of the NYCFC backline. 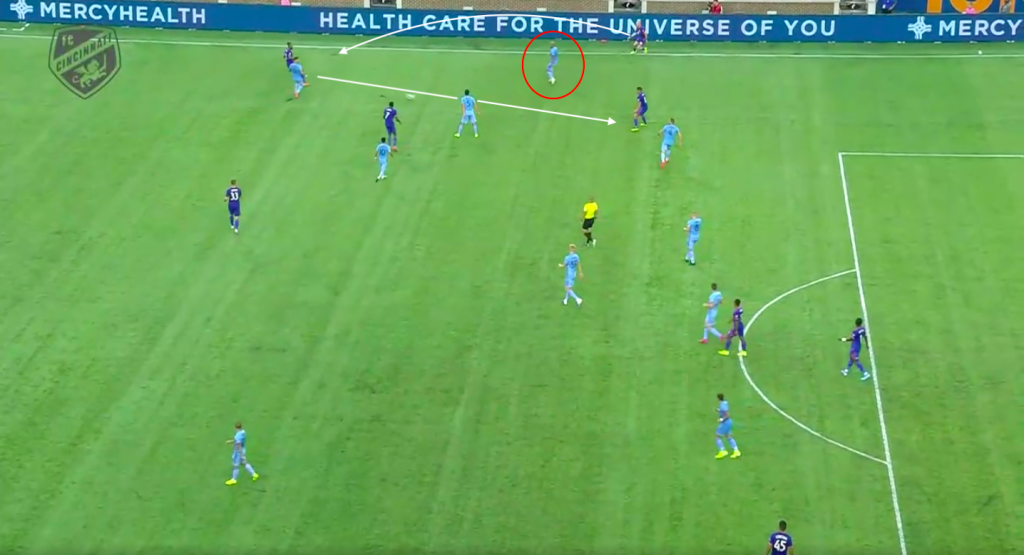 Ulloa’s outside of the foot touch pass was perfectly weighted into the path of the onrushing Gutman. Allan Cruz intelligently held up his run to position himself between the NYCFC defense and midfield. 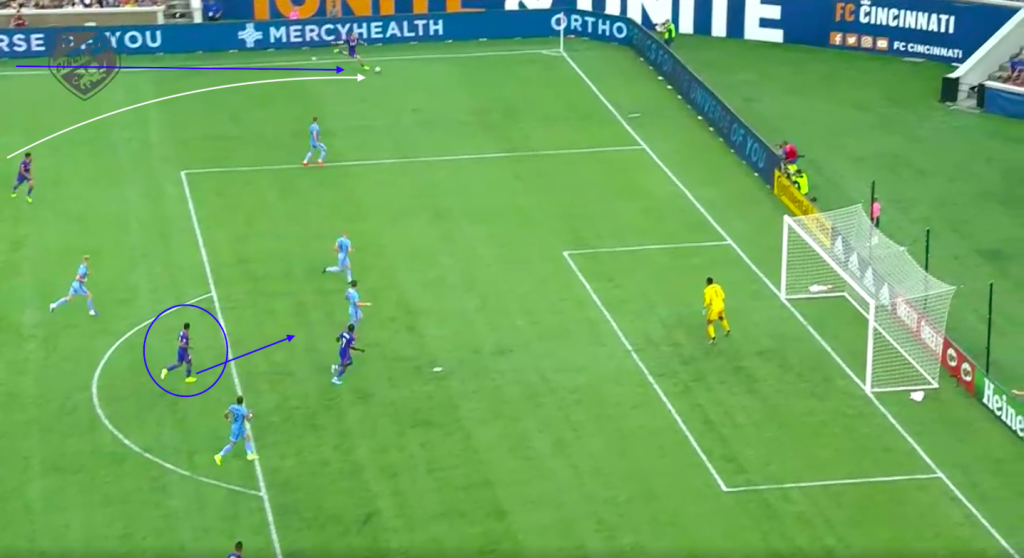 The quality of Gutman’s cross cannot be understated. It was perfectly textured (that’s soccer-speak for putting a curve on the ball) into Cruz’s path, and on the ground instead of in the air. This allowed Cruz to step forward and waste no time in powering the ball into the back of the net. 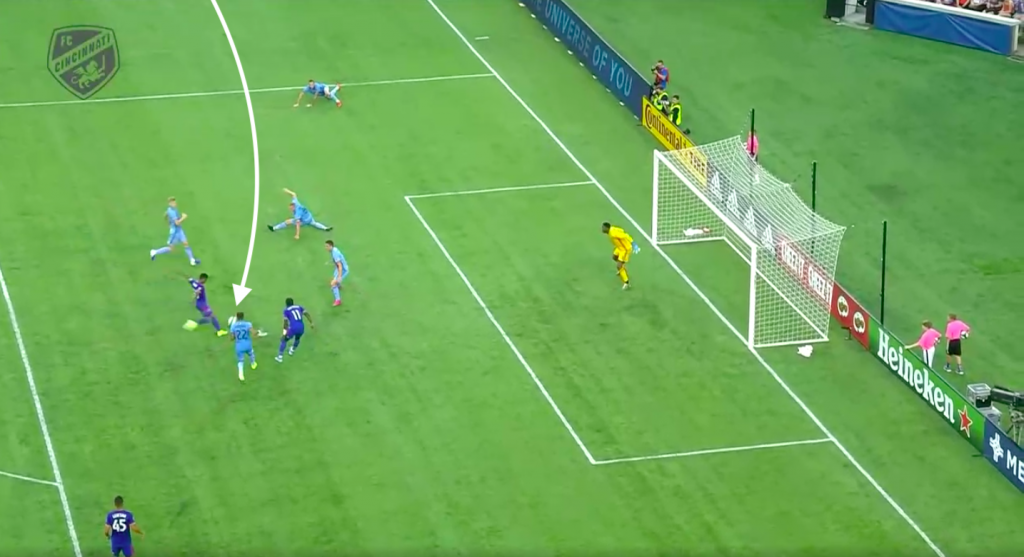 Less than two minutes after Cruz’s opener, NYCFC was level. Cruz and Caleb Stanko pressed to the sideline in an attempt to win the ball back after the kickoff. Roland Lamah was slow to shift over, which is a key component of FCC’s press under Ron Jans. Ulloa elected to stay in the center instead of shifting with the rest of the midfield, covering Lamah’s space. 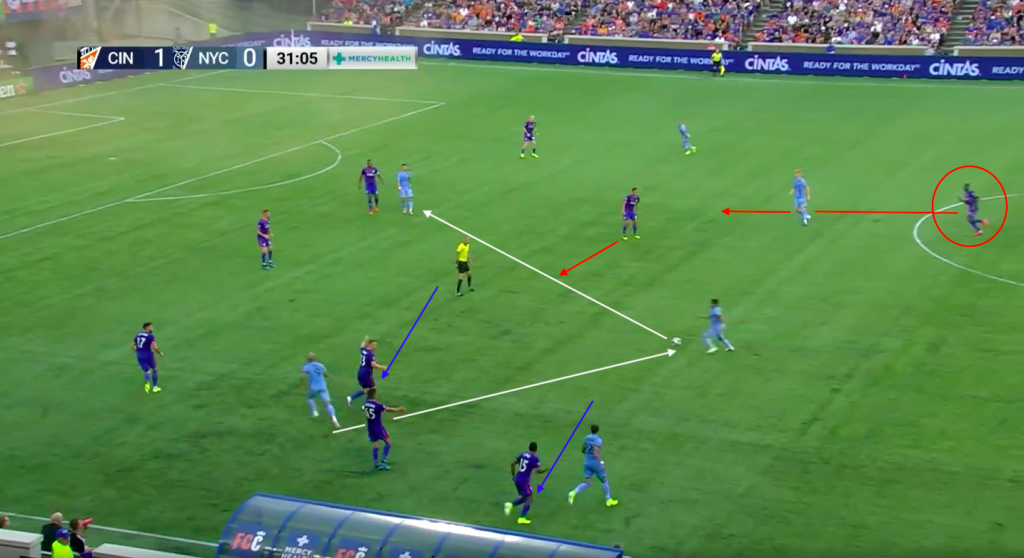 Héber broke through the press and found Maxi Moralez in the space left by Ulloa and Lamah’s failure to shift. You can see Stanko and Emmanuel Ledesma’s frustration with their teammates in the photo above.

Moralez played the ball to Valentín Castellanos, who had Waston tight on his back. 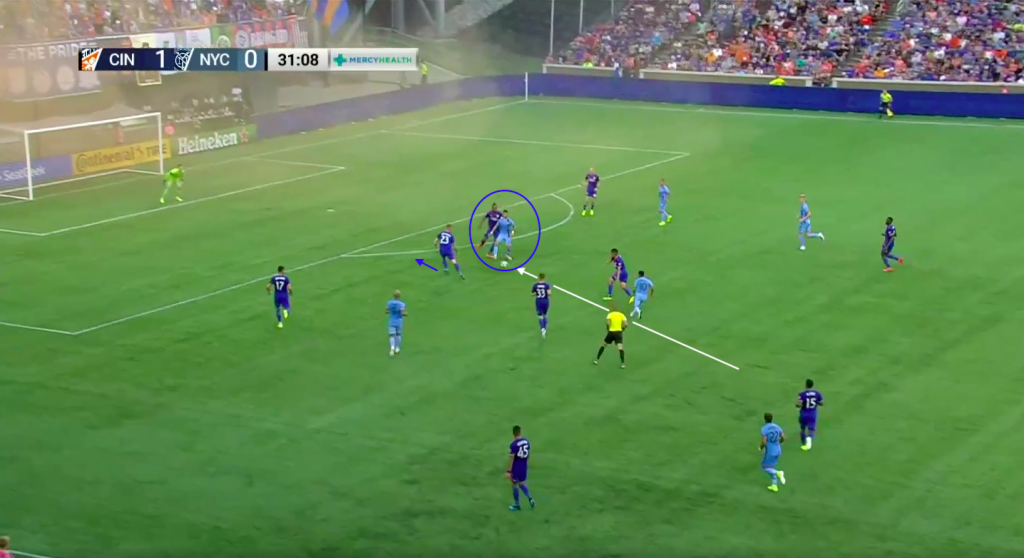 Castellanos turned quickly, creating a bit of space from Waston, but the defenders were still well positioned with Waston closing from the forward’s right and Maikel van der Werff providing cover. The covering defender’s responsibility here is to keep the forward from advancing toward the goal while blocking any potential shots, and the pressuring defender is responsible for keeping the forward from cutting back to the right. 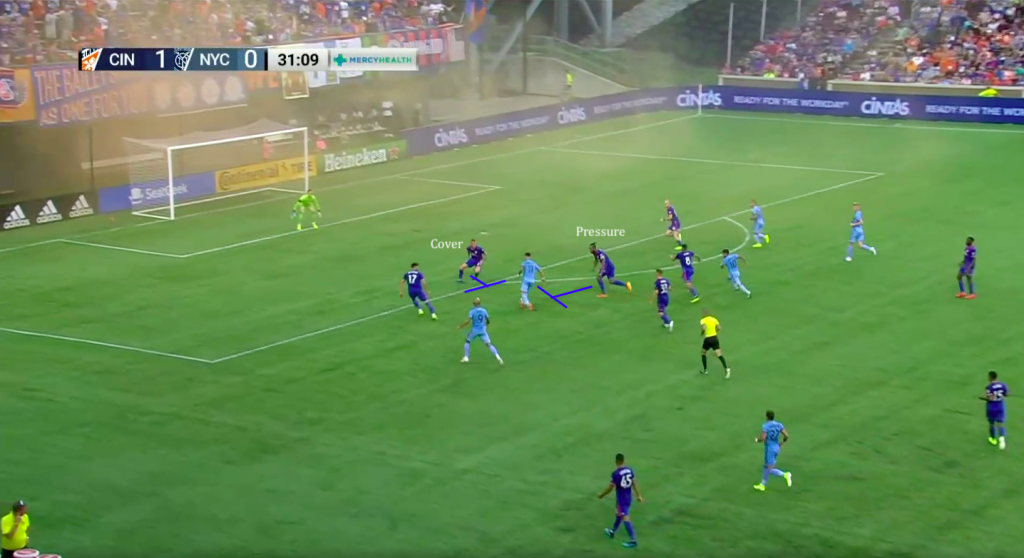 However, Waston got overly aggressive and lunged in an attempt to win the ball or perhaps block a shot that never came. 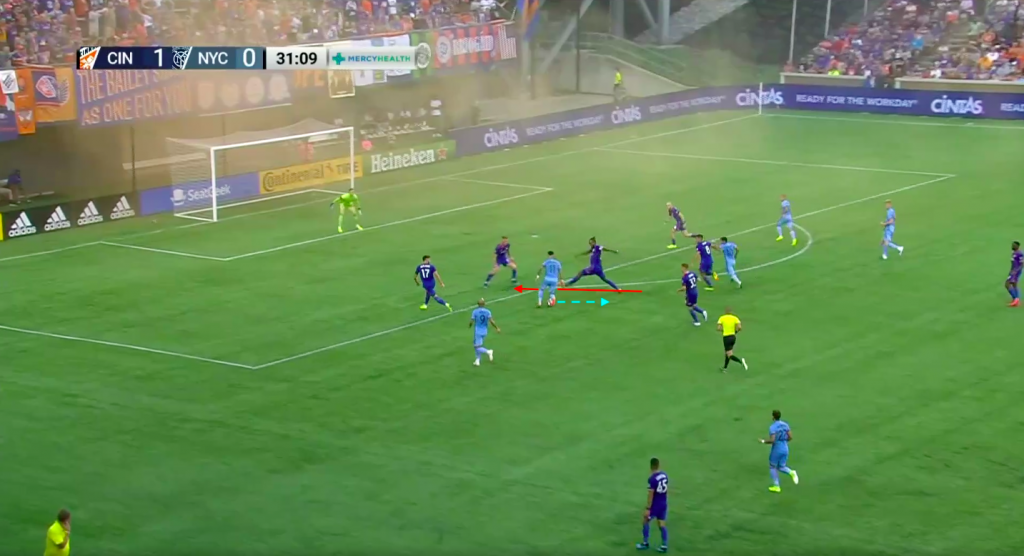 With his aggressive lunge, Waston abdicated his pressuring responsibility, allowing the ball to be cut back centrally and opening the opportunity for Castallanos to get off his superb curling effort to tie the match at 1-1.

NYCFC’s game-winner came from a poor turn over in transition. Ledesma, safely in possession, attempted to beat his defender, while Mathieu Deplagne was making a run up the sideline. 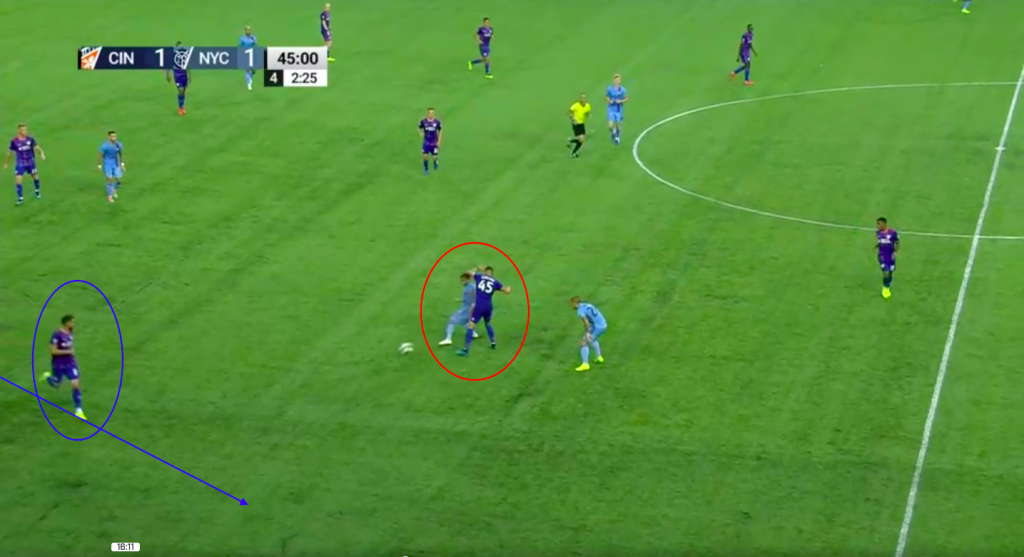 With Deplagne caught forward, Moralez stepped in to win the ball and carry it down the line. Van der Werff was forced to step outside as the covering defender with Ledesma giving chase as pressuring defender. With van der Werff shifting wide, Castellanos (light blue circle) was left unmarked, begging for Waston to shift with to the right balancing out the backline and allowing Gutman to pinch in to mark Héber. 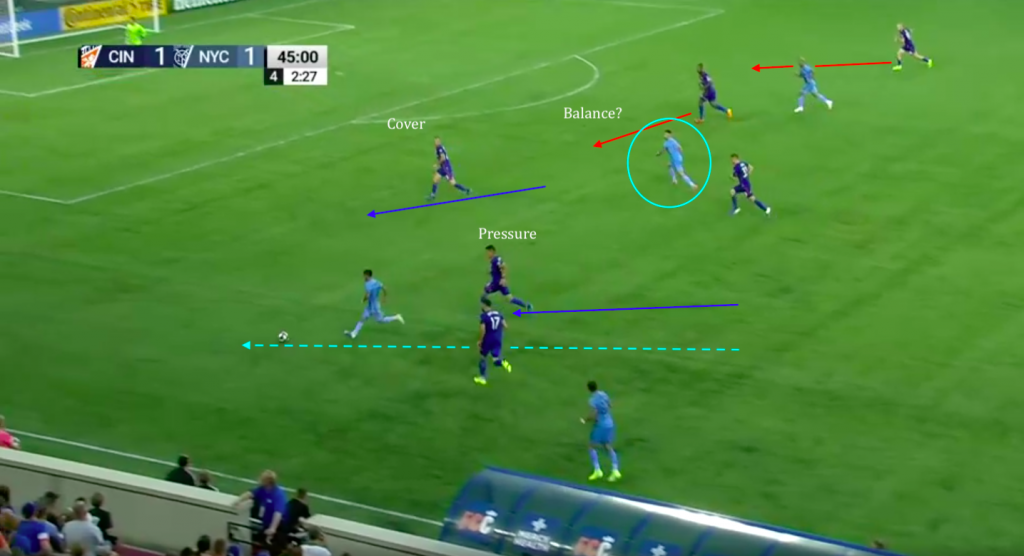 Moralez played a nicely textured pass into Castellanos, causing Waston to step to the ball and leaving Héber unmarked. 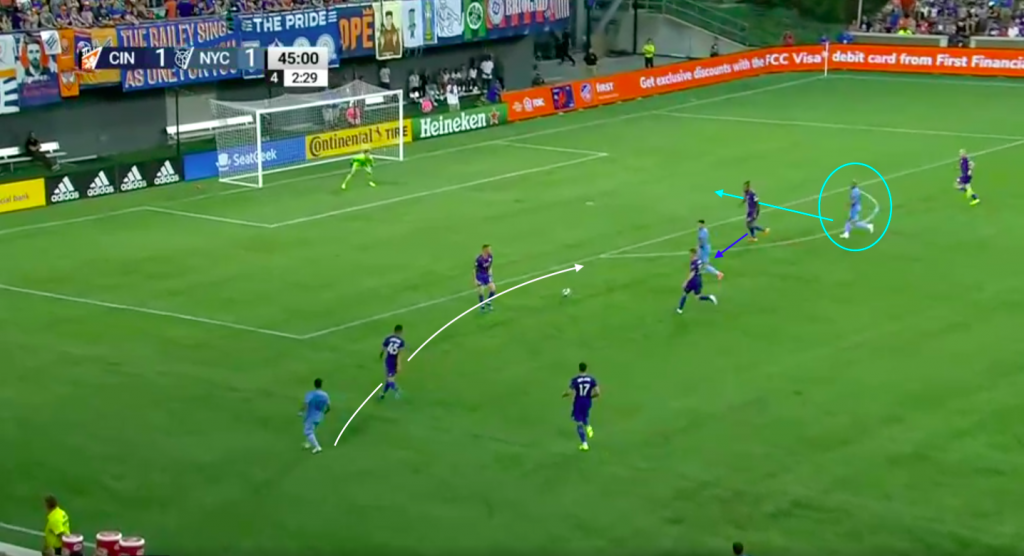 Castellanos touched the ball beyond Waston and into the path of Héber, who finished before Gutman could recover. 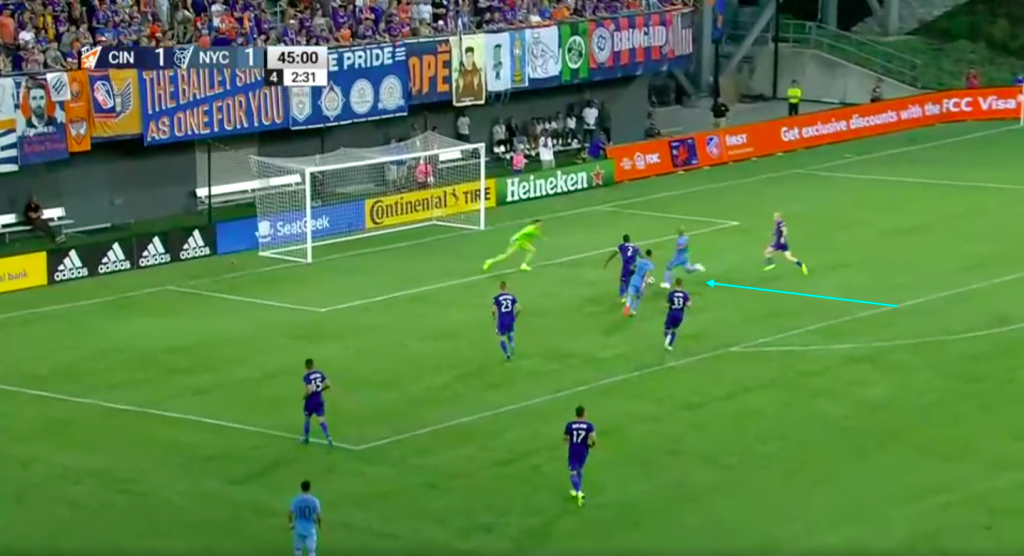 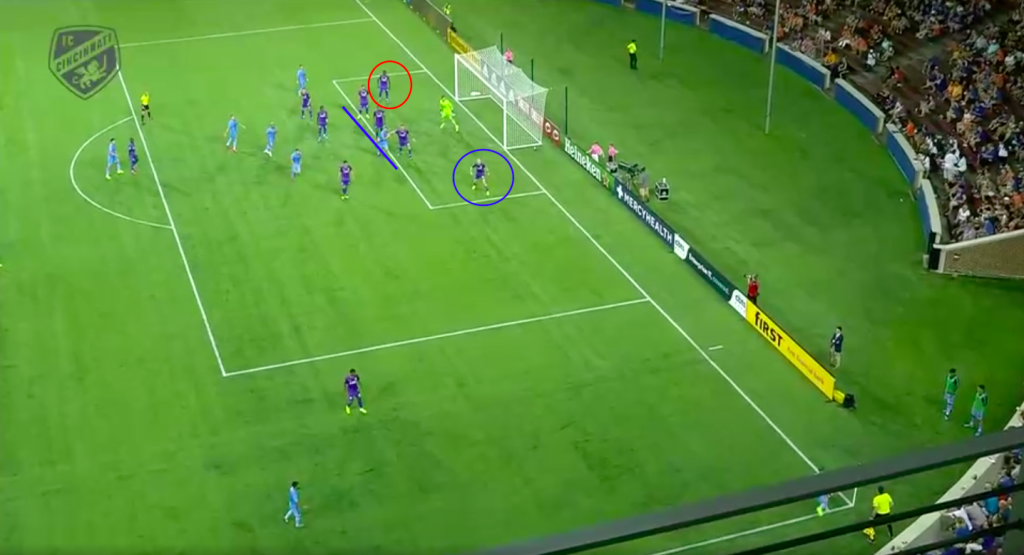 As the ball was served in, Deplagne and Darren Mattocks were unable to prevent NYCFC from winning the initial header. Etienne Jr. stepped forward in his zone, while Gutman stayed put. It’s unclear whether Etienne Jr. shouldn’t have stepped, staying in to mark Castellanos, or if Gutman was supposed to step forward with Etienne Jr. as the ball swung in, pulling Castellanos offside. Either way, the defenders were not on the same page, and Castellanos easily made it 3-1 NYCFC. 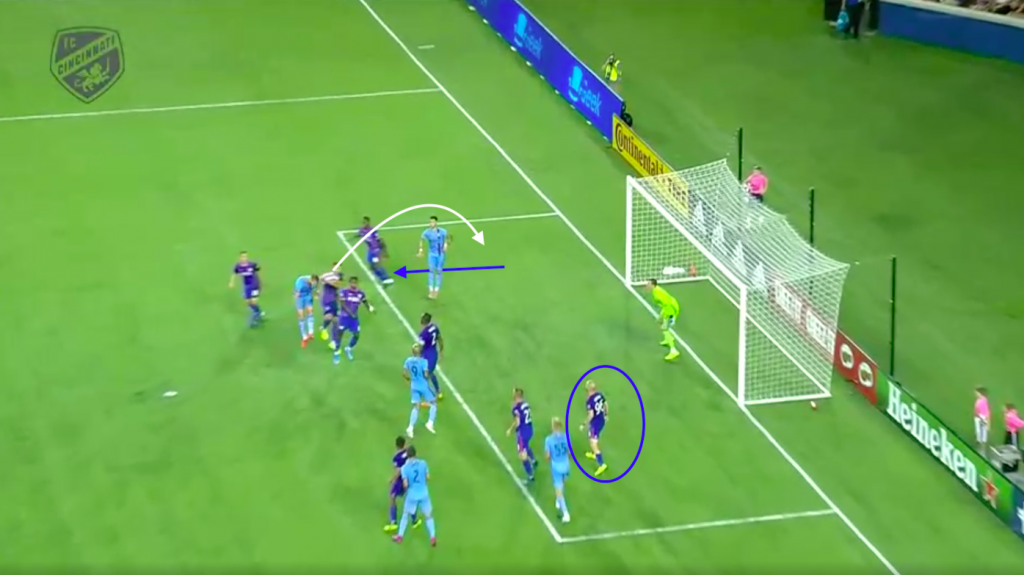 It could be argued that NYCFC’s fourth tally of the night was a throw-away goal, as FCC pushed forward leaving their backline exposed. It all started with a throw-in that left Cruz with a defender on his back. He went down under the pressure, but no foul was given. Héber spotted the opportunity immediately and ran by Stanko, hungry for another goal. 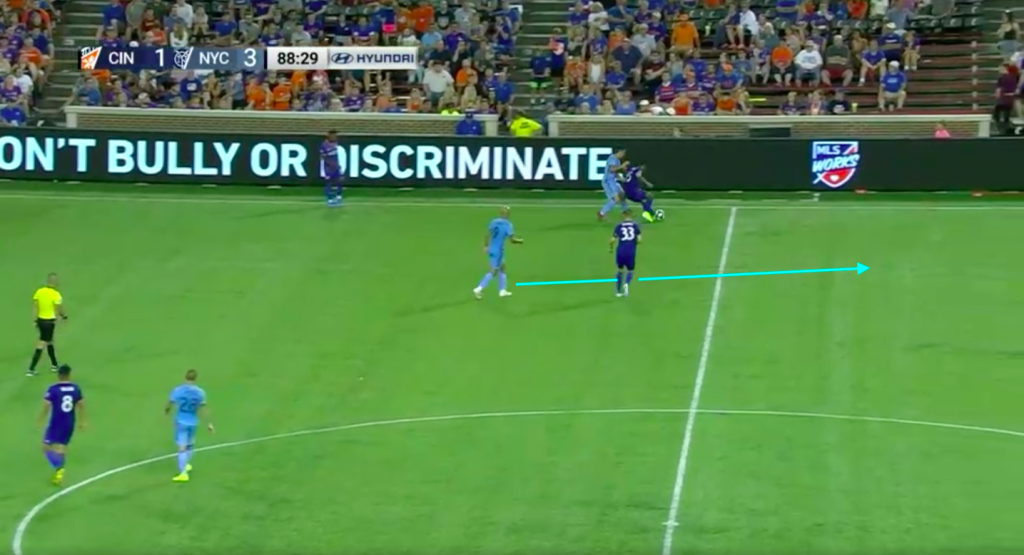 As Héber dribbled with pace, van der Werff was forced to defend the attacker 1v1, with Stanko (red circle) very slow to react to the run. It’s tough to fault the Dutchman’s technique, as he did a good job forcing the speedy attacker to the outside. 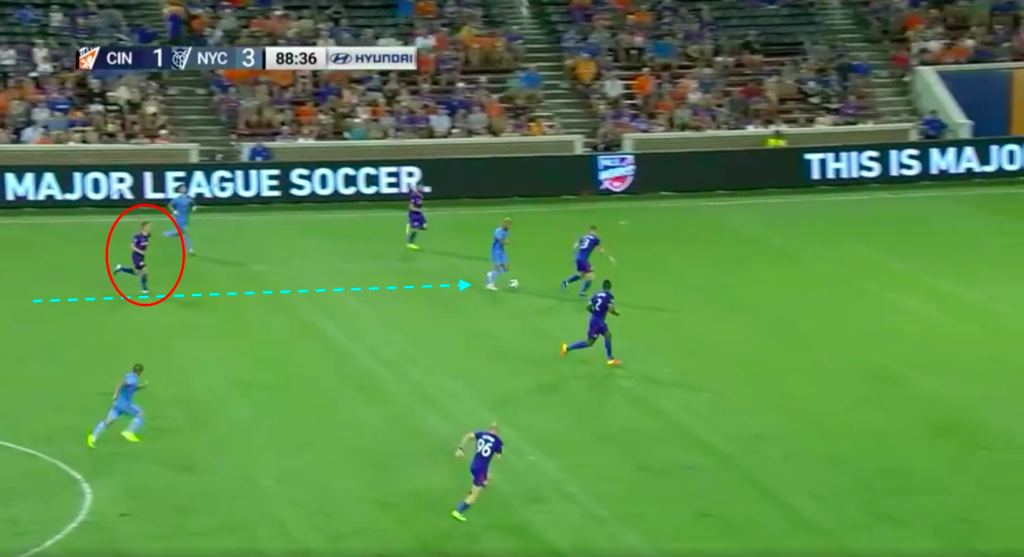 As Héber accelerated to the outside, van der Werff had the attacker where he wanted and needed to continue to stay on the forward’s hip, pushing him outside and forcing him into a shot from a poor angle or into a cross. 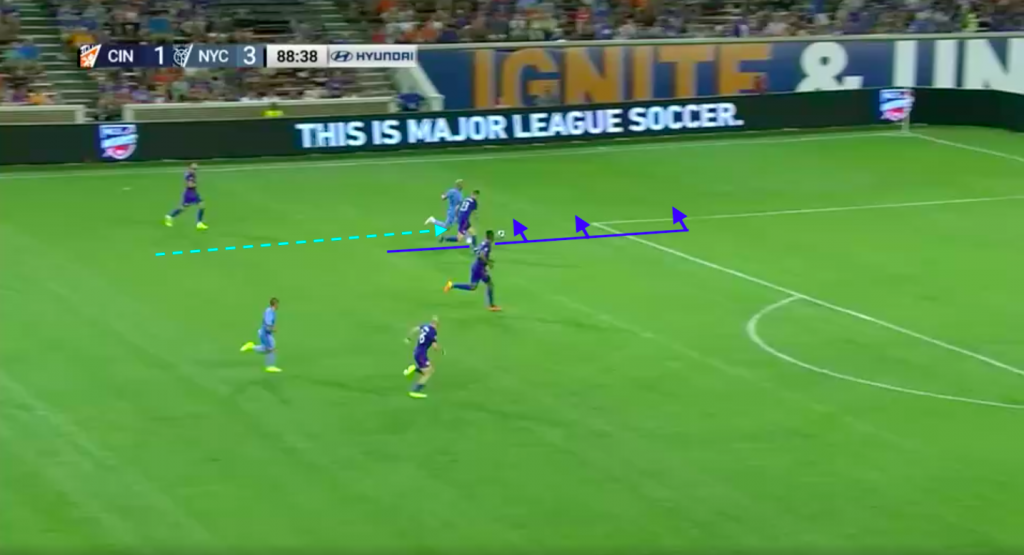 However, van der Werff accelerated in an attempt to cut off the dribble, allowing Héber to cut back to the inside and open up the space for NYCFC’s fourth and final goal. 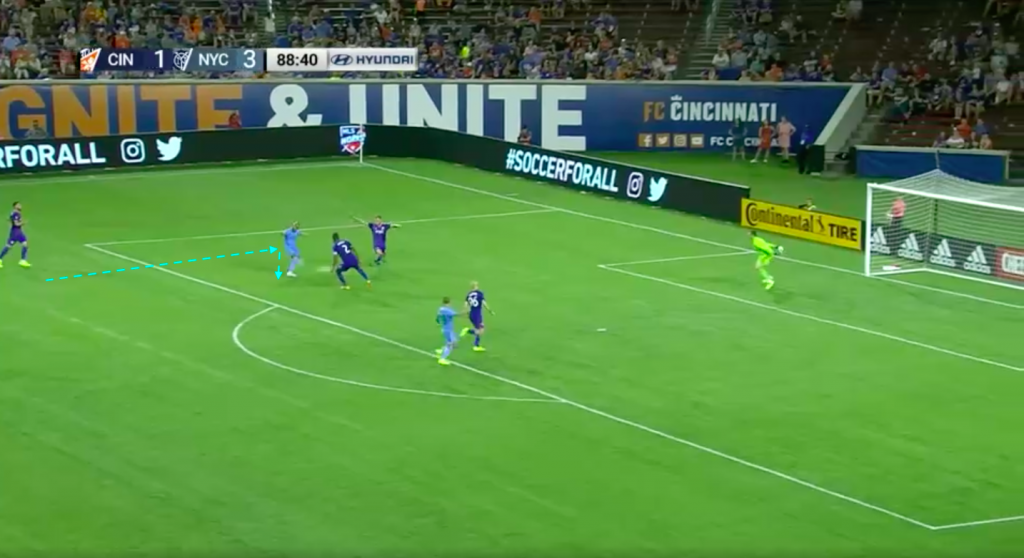 FC Cincinnati didn’t play poorly, but giving up four goals is never a recipe for success. NYCFC’s attacking talent is nearly unparalleled, however, and outside of the set-piece goal, it was forced to score from excellent individual efforts. FCC should be proud of their overall defensive effort while recognizing that, without some real improvement in some of the individual moments, it will continue to hemorrhage goals.